Following the sexist demands that women wear high heels and makeup to work, Japanese businesses are now instructing them to not wear glasses. The younger generations aren't having it. 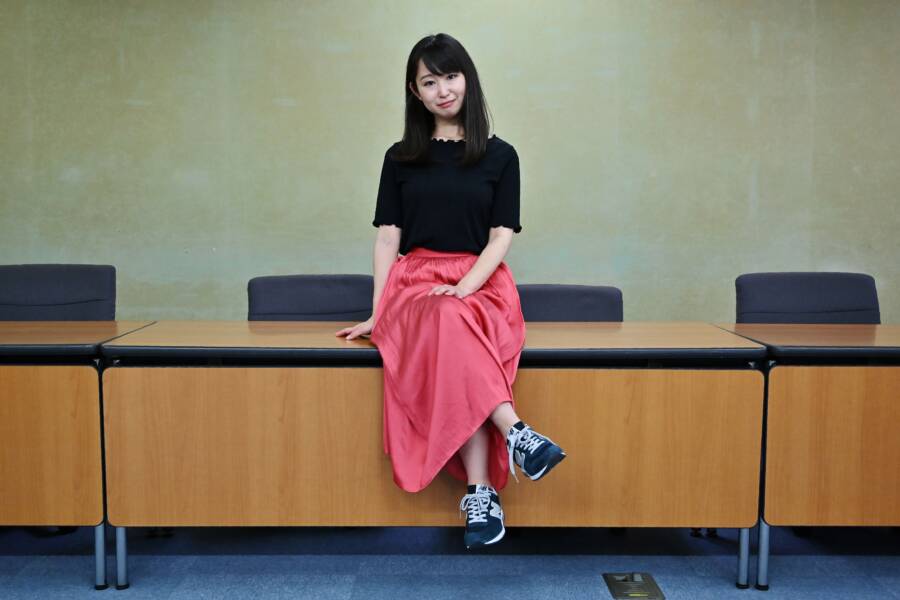 CHARLY TRIBALLEAU/AFP/Getty ImagesYumi Ishikawa, leader of the #KuToo movement, who is working to help eradicate the glasses ban in Japan.

Women are familiar with being told to smile, to cheer up, and to follow countless other instructions that men dump on them. According to Bloomberg, several Japanese businesses are now telling them not to wear glasses for fear of detracting customers — sparking outrage.

The #glassesban hashtag began trending on Wednesday, after Japan’s Nippon TV informed the nation of companies demanding female employees opt for contact lenses instead. One user explained she was coerced to do so while recovering from a painful eye infection.

Another said her former employer explained that customers didn’t find glasses appealing. These are not rare occurrences. According to Quartz, major retail chains claim females in glasses give off a “cold impression.”

“The emphasis on appearance is often on young women and wanting them to look feminine,” said Banri Yanagi, a 40-year-old sales associate at a Tokyo life insurer. “It’s strange to allow men to wear glasses but not women.”

While the social symptoms here lie glaringly at the feet of individual businesses deciding how women should dress, the root cause is almost undeniably deeper — and one of the last gasps of Japan’s old guard, where traditions regarding gender were once non-negotiable.

Clearly, modern women (and men) are ready to challenge these norms.

A segment by The Japan Times on the #KuToo movement.

The prohibition on glasses for Japanese saleswomen is just the latest controversy related to corporate dress codes. It was only a few months ago that women protested the demands they wear makeup to work. On top of that, the #KuToo movement earlier this year fought against rules requiring women to wear high heels.

Sparked by actor and writer Yumi Ishikawa, the hashtag #KuToo clearly plays on the #MeToo movement, which has been gaining ground in Japan since 2018. To distinguish the new movement as clothing-centric, the term uses the Japanese words for shoe (kutsu) and pain (kutsuu).

To review, female Japanese professionals have now been told to wear makeup and high heels — and ditch their glasses.

“If wearing glasses is a real problem at work, it should be banned for everyone — men and women,” said Ishikawa, whose petition to sink the requirement to wear high heels has garnered over 31,000 signatures. “This problem with glasses is the exact same as high heels.”

“It’s only a rule for female workers.”

Ishikawa’s petition to end the high heel requirement was put forth to the government in June, but was met with the sheer dismissal of one man’s opinion. The former Health, Labor and Welfare Minister Takumi Nemoto said the status-quo simply didn’t bother him.

“It’s generally accepted by society that [wearing high heels] is necessary and reasonable in workplaces,” Nemoto said at a committee session. 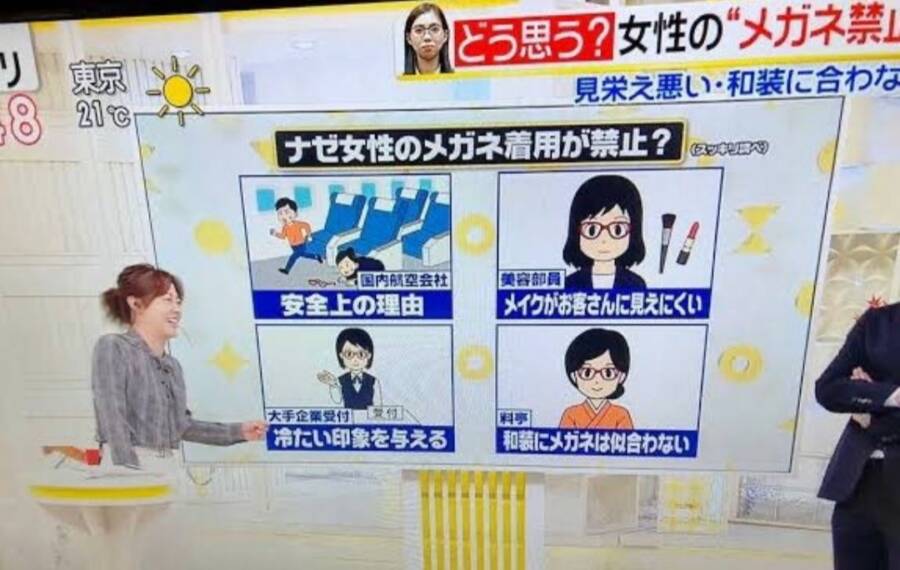 TwitterA snapshot of a Japanese TV segment on the new glasses ban.

Nippon TV’s segment on the issue followed a report published by Business Insider Japan in October. The most stunning reason given for demanding employees not wear glasses to work was that it was difficult for customers to see the employee’s makeup behind them.

“Isn’t it so troublesome when you can see all the middle-aged men in the world?” one user cheekily wrote.

Numerous online users quickly noted that the glasses ban for female employees fell directly in line with some controversial Japanese school rules, such as forcing students with lighter hair to dye their hair black. Some schools also forbid female students from wearing stockings under their skirts in the winter.

Other schools even have the gall to determine what color underwear female students wear.

Ultimately, it appears to be quite clear that Japanese society is reckoning with a growingly interconnected and globally aware populous that simply has no time for the patriarchal rules of yesteryear.

After learning about Japan’s #glassesban movement, learn about the honors student suspended for a dress code violation. Then check out a brief history of controversial political fashion.