Thousands of years ago, Greek and Roman statues were covered in paint. Now, the traveling "Gods In Color" exhibit uses state-of-the-art technology to recreate them as they originally looked. 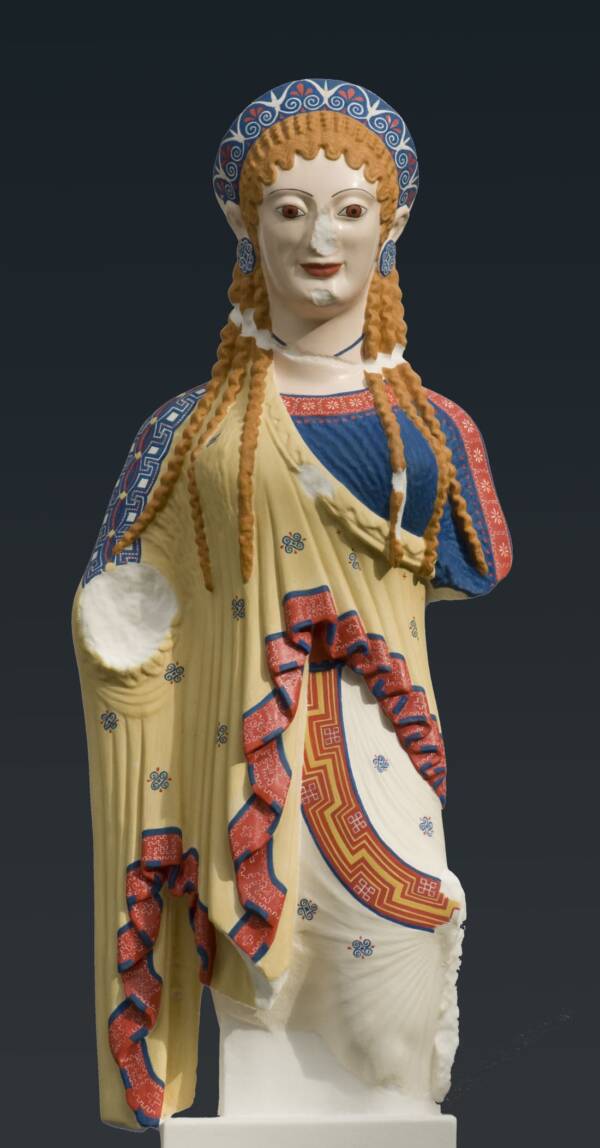 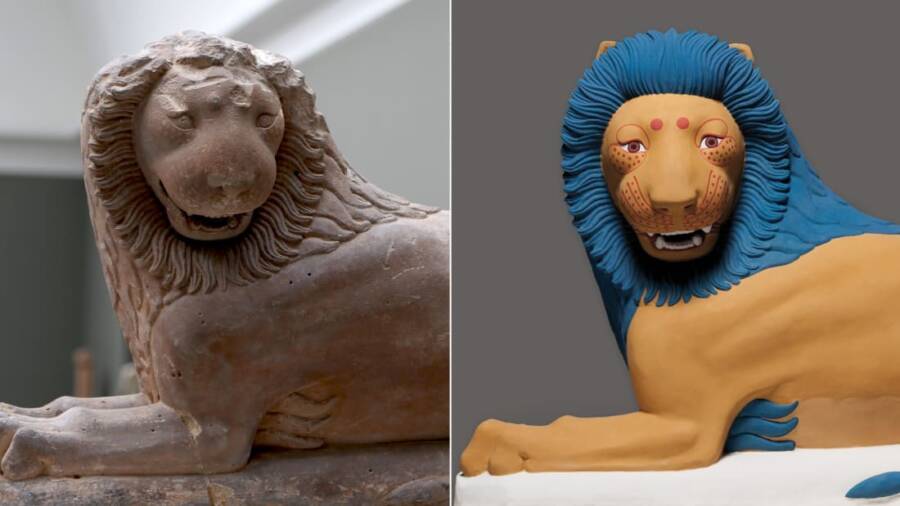 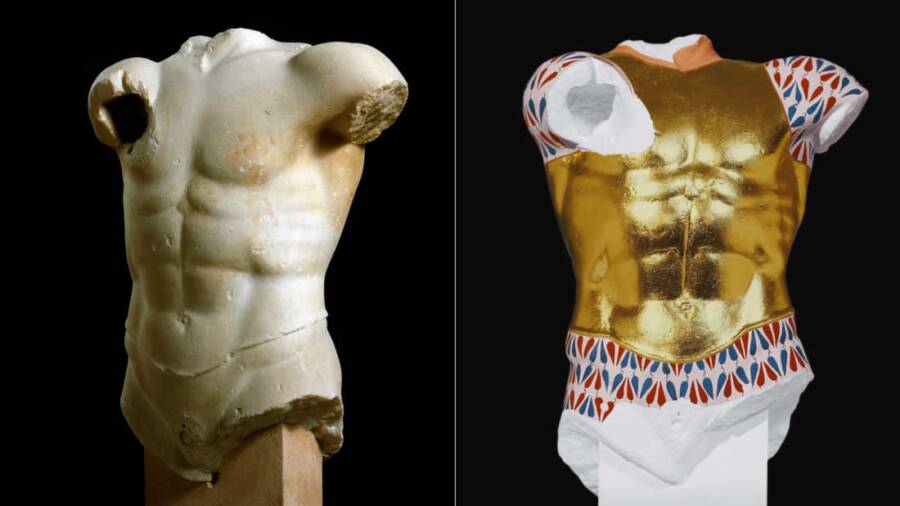 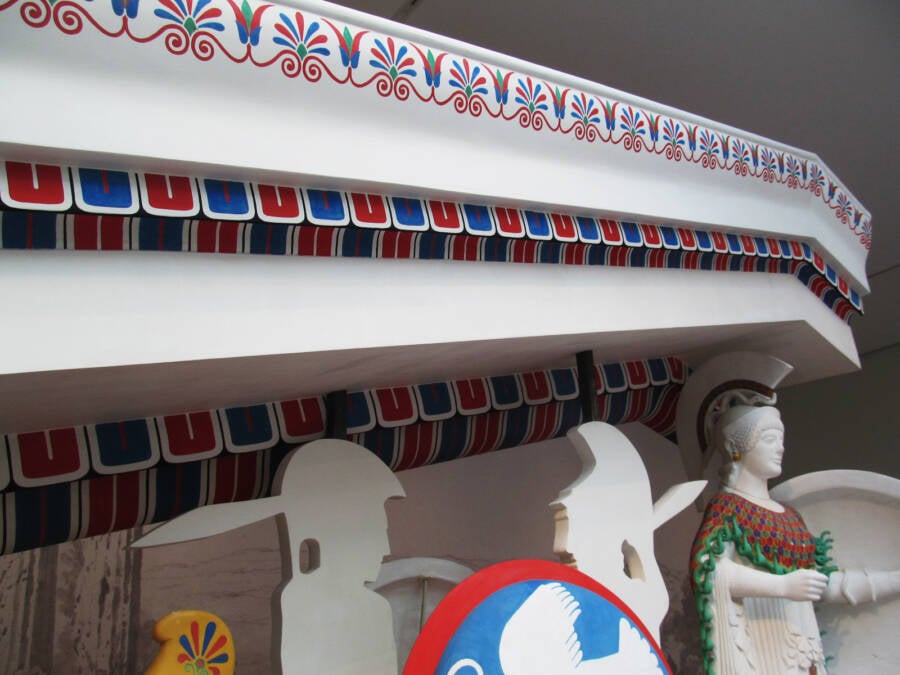 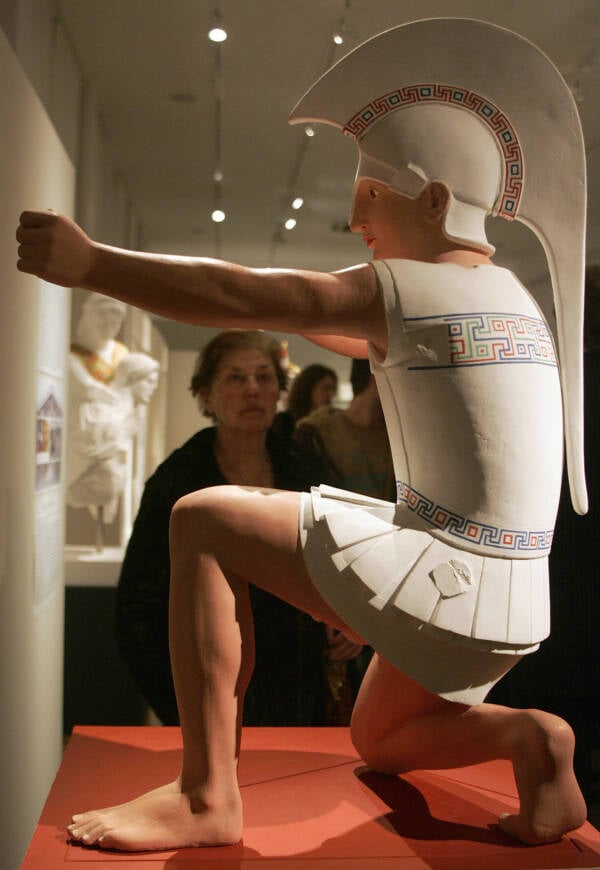 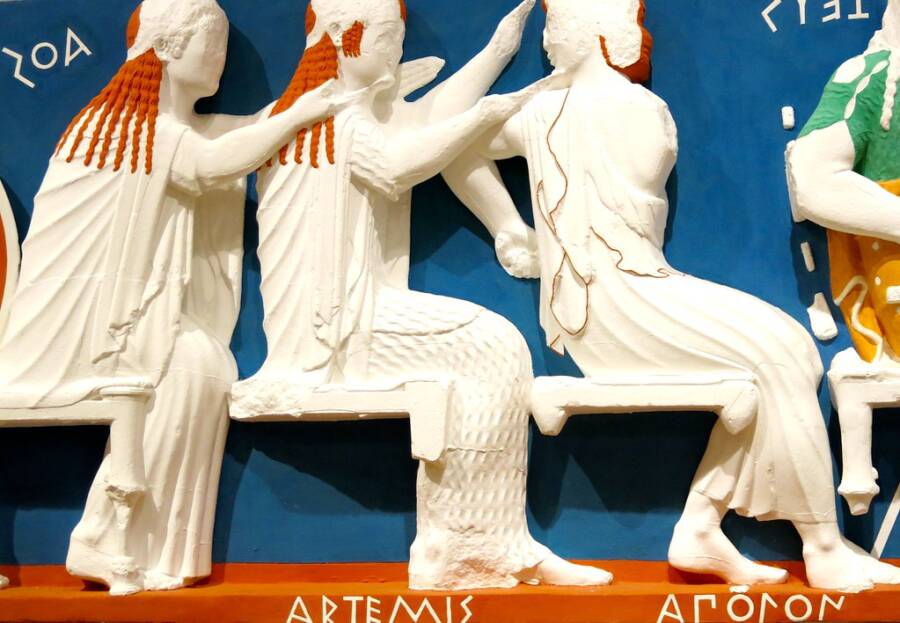 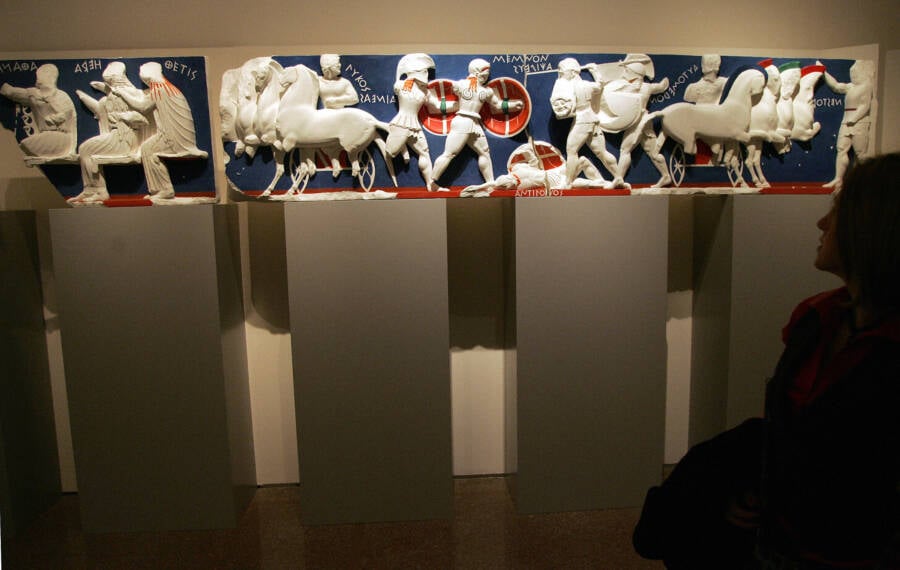 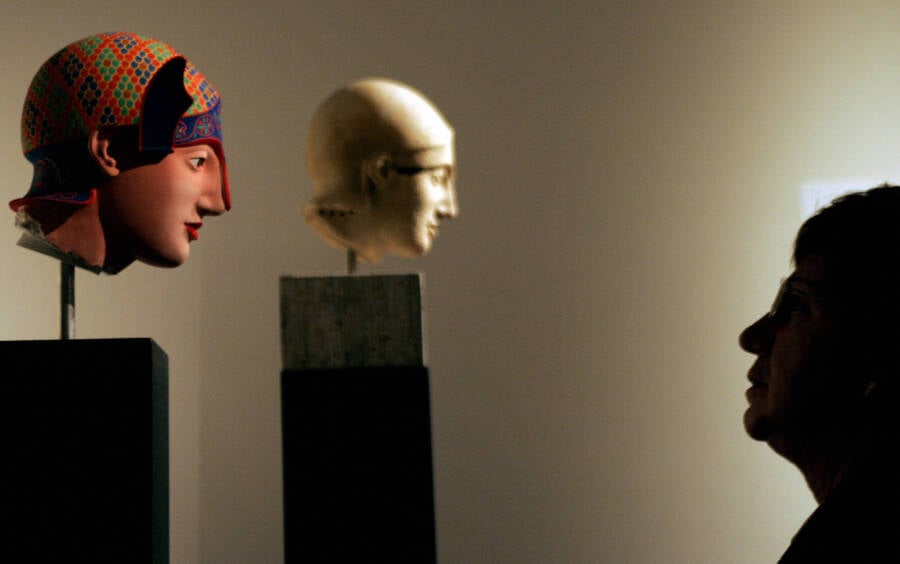 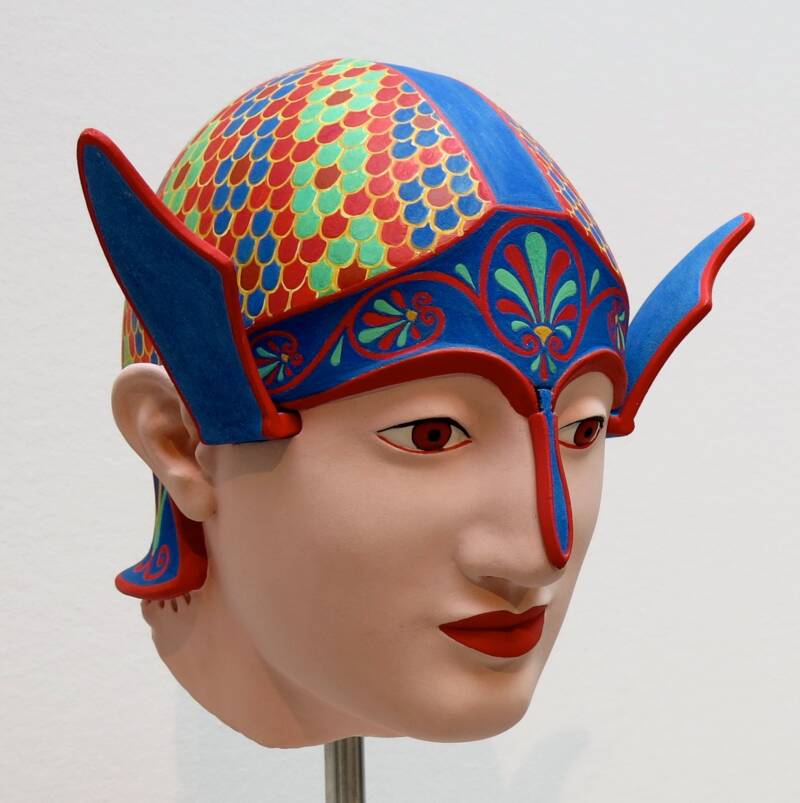 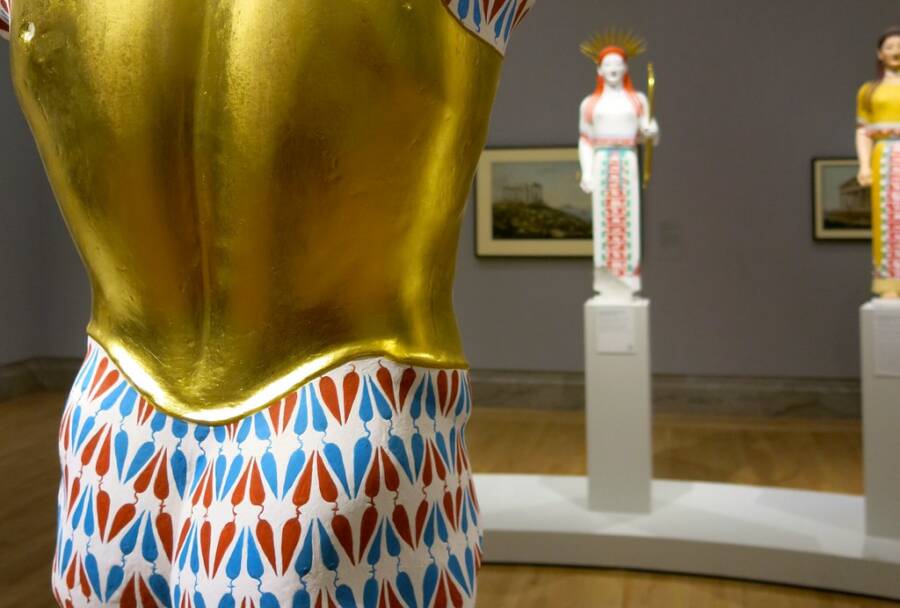 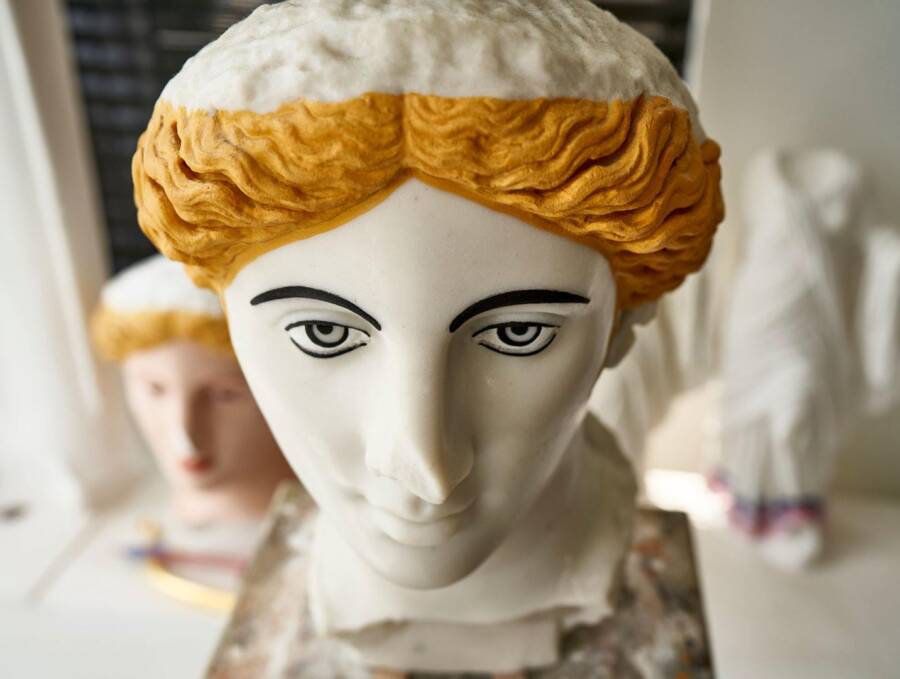 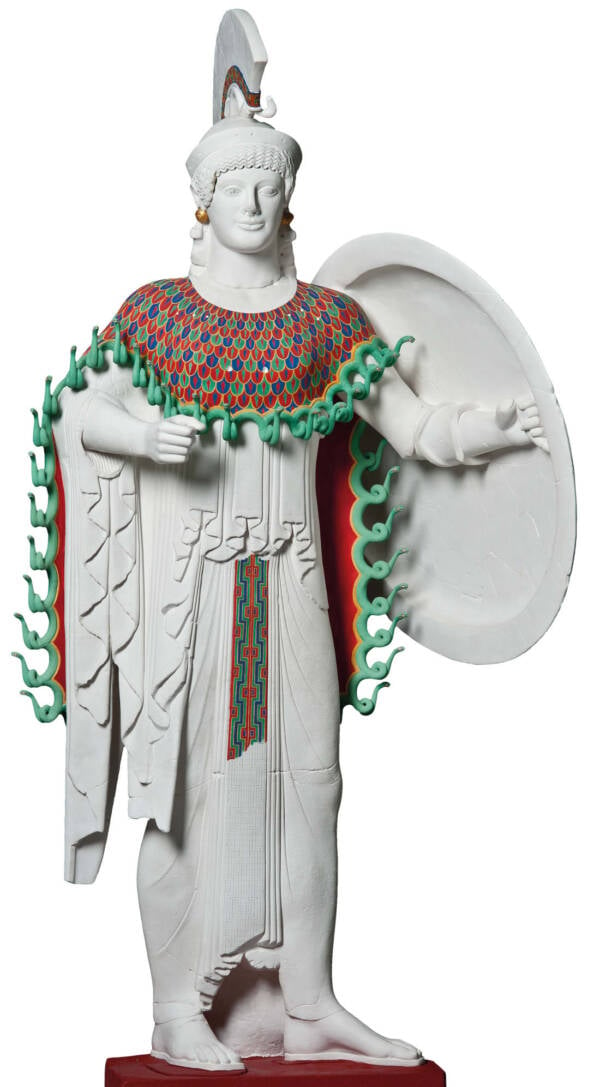 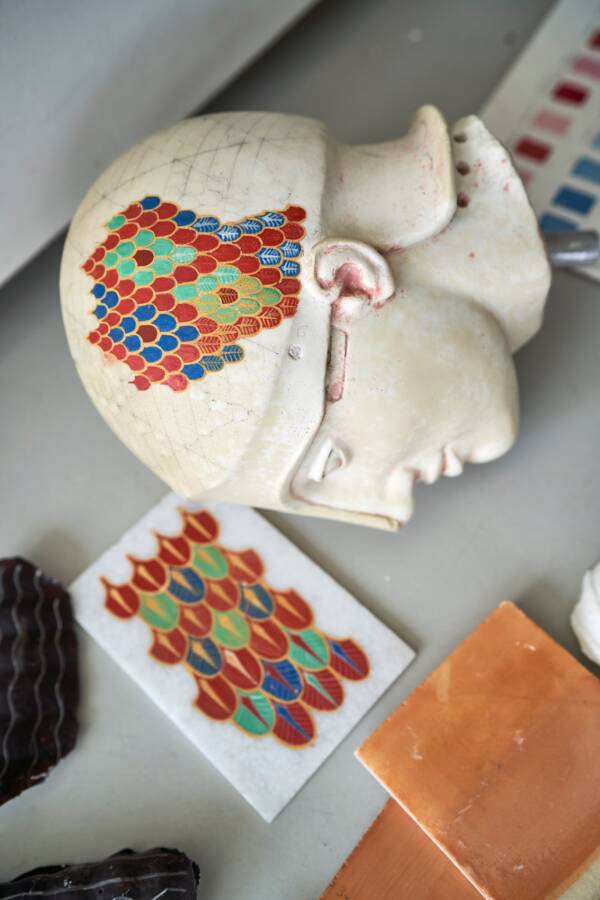 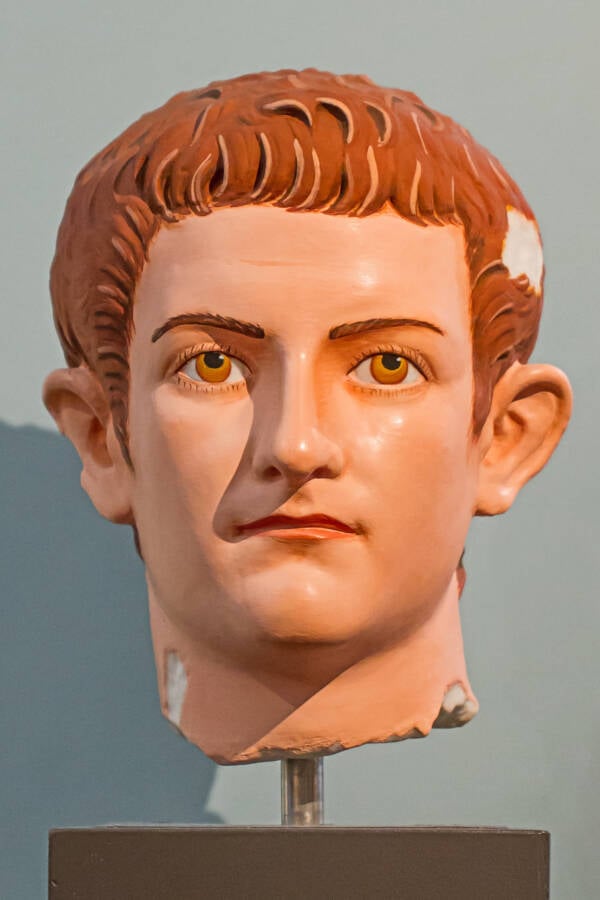 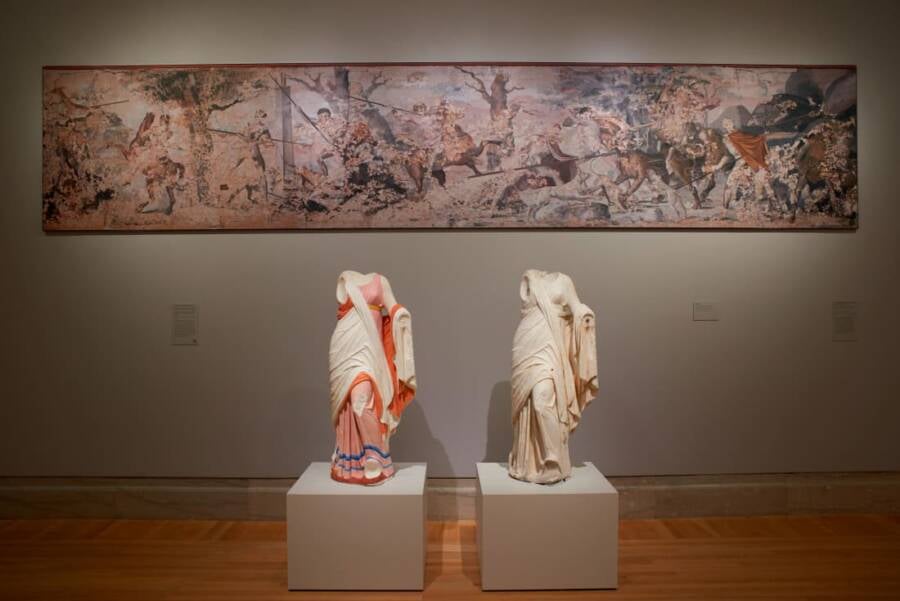 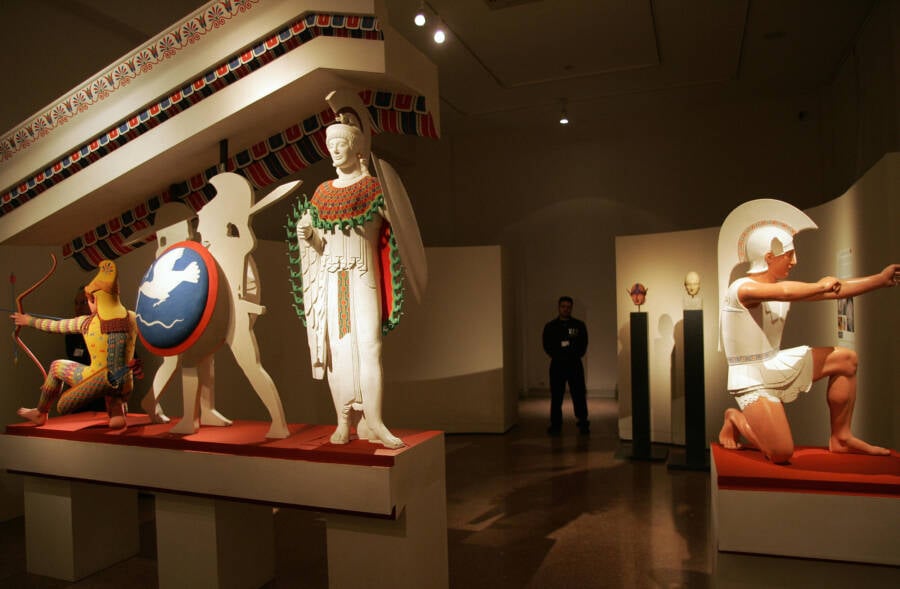 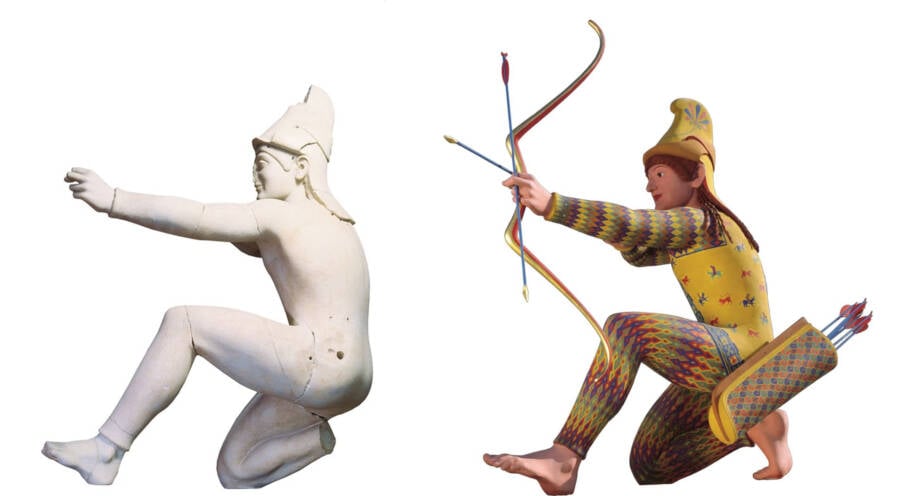 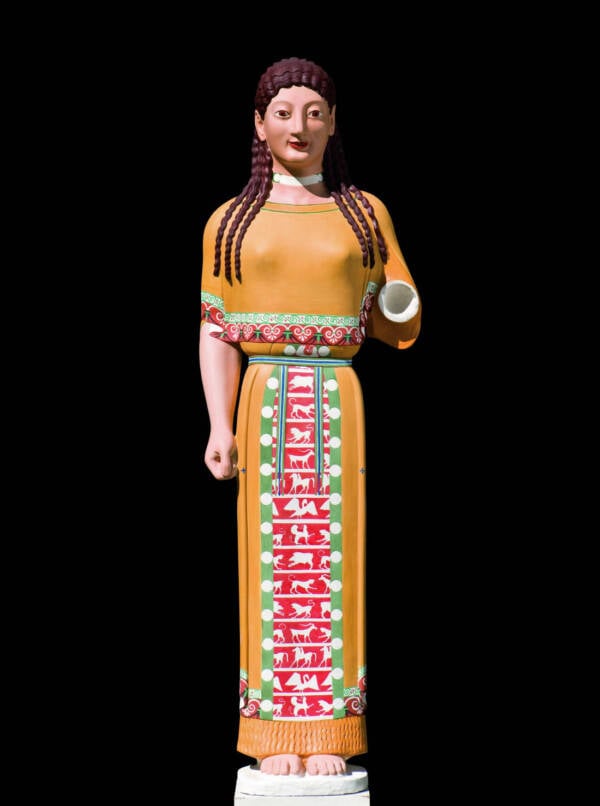 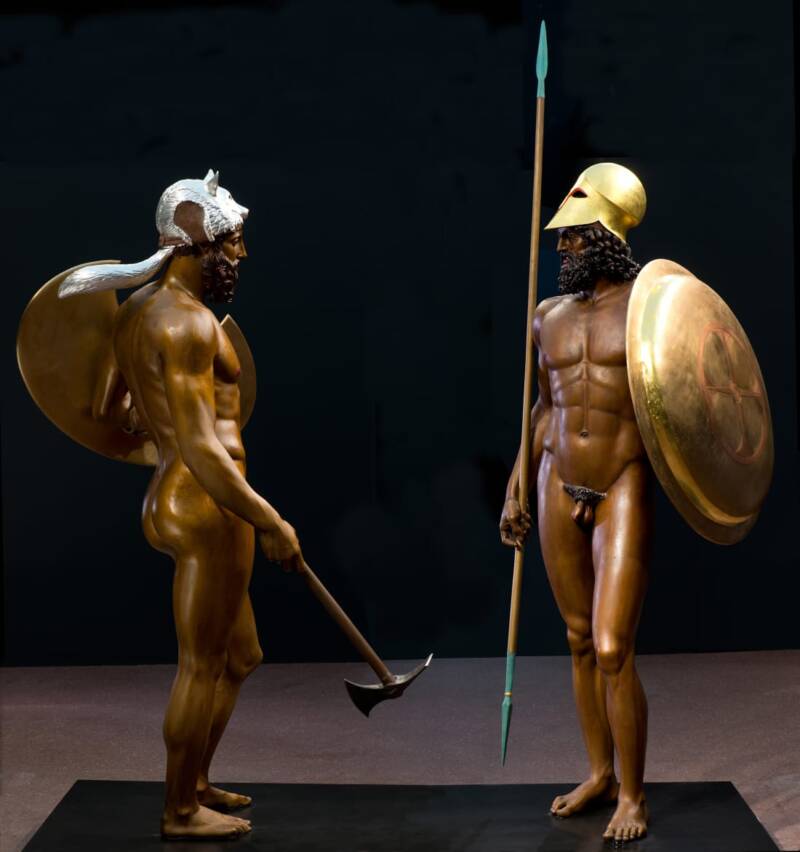 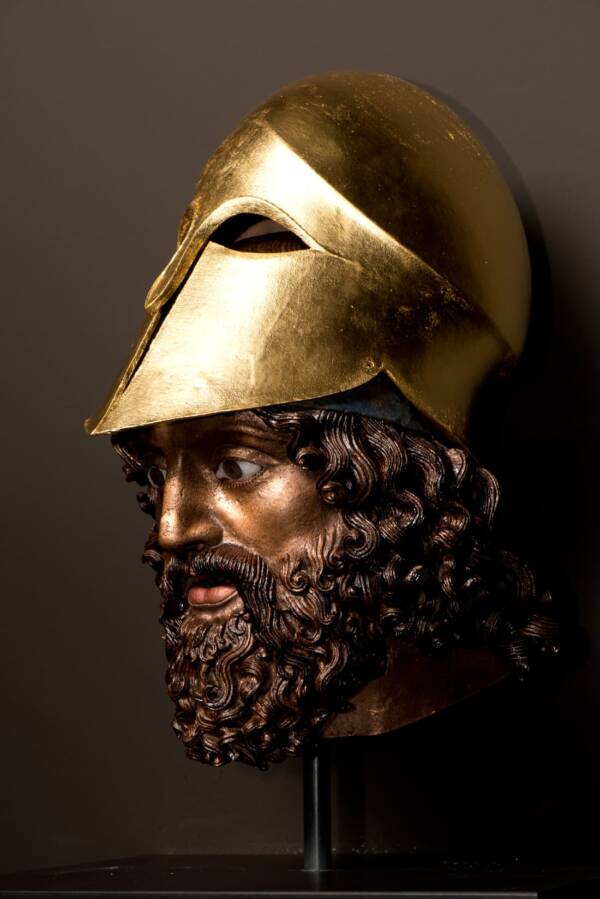 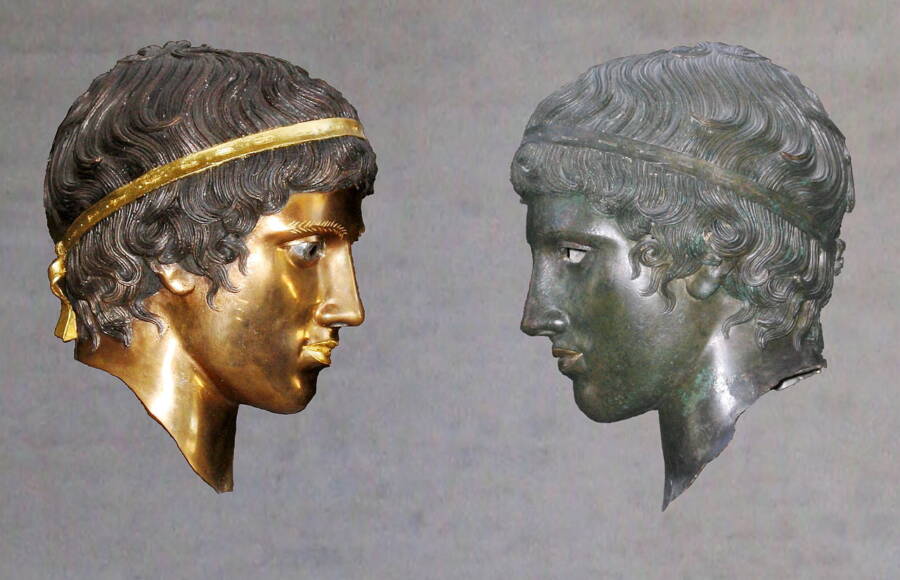 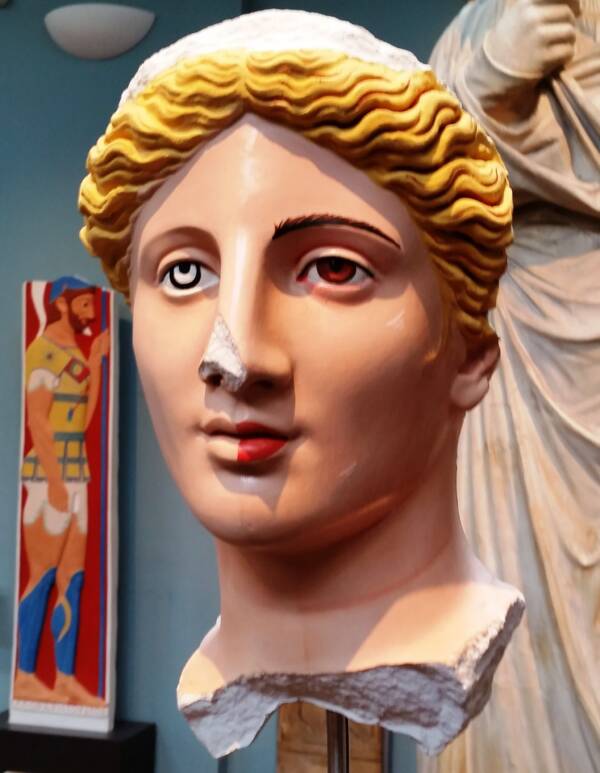 Pure white marble. This is the presumed look that ancient Greek and Roman artists were going for — and what we see in museums across the world. But are our textbooks — even our own eyes — deceiving us?

Mark Abbe, a professor of ancient art at the University of Georgia, calls the myth of whiteness in classical sculpture "a lie we all hold dear." The notion that ancient Romans and Greeks hated bright colors, he says, "is the most common misconception about Western aesthetics in the history of Western art."

In fact, as archaeologist Vinzenz Brinkmann found in the 1980s when he noticed little flecks of color on ancient Greek sculptures, it was all the rage in antiquity to coat white marble in bright paint. The Venus of Greek myth wasn't bone-white, after all; she had pinky-peach skin, bright red lips, and colorful irises.

The myth of whiteness cemented itself in the Neoclassical era of visual art — from around 1760 to 1830 — when ancient art and culture experienced a revival. And sure enough, the white marble form was resurrected. By eschewing color, Renaissance sculptors could show off their technical skill.

The "Gods In Color" exhibition, meanwhile, which began in Munich and then toured around the world, aims to break this mindset. Thanks to new investigative methods, scholars have been able to provide an increasingly precise sense of the paint colors that used to don ancient marble art.

"Gods In Color": Polychromy In The Ancient World

The exhibition pieces in "Gods In Color" are plaster recreations of Greek and Roman sculptures, painted with a close approximation of their original hues. The study of small flakes of remaining pigment on the artworks determined the palette.

To create reproductions, the sculptures are first observed with the naked eye, then under the scrutiny of ultraviolet lamps. The light must come from a low angle, almost parallel to the surface. This trick brings out details otherwise impossible to see or analyze.

The result is a stunning juxtaposition of realities: what we assumed once was, and what the science tells us is true.

"Gods In Color" has been to Germany, Spain, Turkey, Mexico, and the United States, boasting more than two million visitors worldwide.

Color pigments employed in ancient times did not age in the same ways. Ochre is soon faded, whereas pigments like red and blue that are mineral-derived can stay for many centuries. 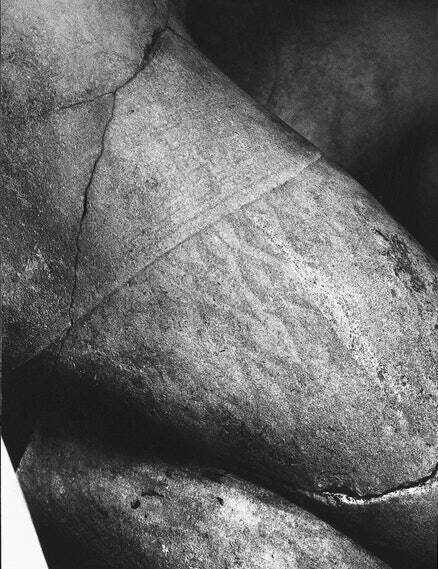 Ultraviolet light provides the first indication of color and pattern that may be invisible to the naked eye. The pigment traces are then identified based on how they faded, and what we know so far about how these dyes react to erosion.

Applying these techniques is a lengthy process, made even longer if the sculpture is missing integral pieces that require reconstruction.

Artists must consult other works of art and historic texts to make a true-to-life rendering of these accessories. This process is also repeated for multiple areas of the statues, to make sure nothing is glaringly erroneous in their depictions.

The reconstructions only apply colors that could be clearly identified during investigations; some sections remain white (or bronze, as some ancient bronze statues seem to have been painted as well).

In the case of the two Riace Warriors, the sun-tanned skin is actually layers of thinned asphalt varnish with a little red pigment mixed in. This also helps with depth, settling in the contours of the body's form. Contrasting copper makes their nipples and lips. 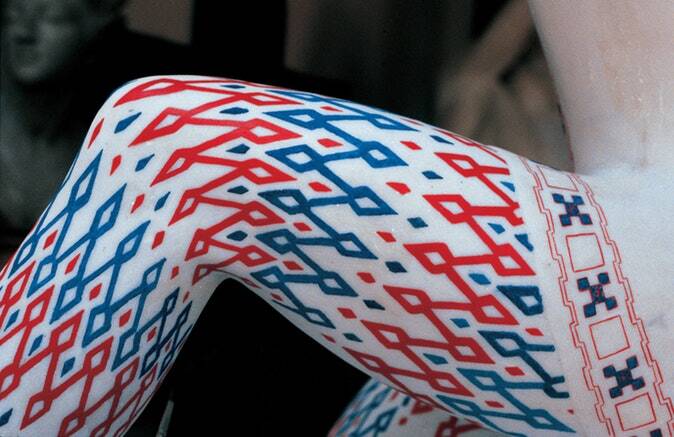 Liebieghaus SkulpturensammlungReconstructed in detail the tights on the archer's leg.

Some may still debate the idea of polychromy in ancient sculpture. The curators of the exhibit even admit that these visuals can be jarring to our senses. Admittedly, paint does not adhere to, nor reflect light quite the same on plaster reproductions.

But the very idea that ancient Greek and Roman statues were much more colorful than we once thought is one step closer to complete historical accuracy.