Meet The Goliath Birdeater, The Biggest Spider In The World By Weight

Measuring nearly a foot wide, the Goliath bird-eating tarantula takes down prey like mice and birds, then liquefies their internal organs. 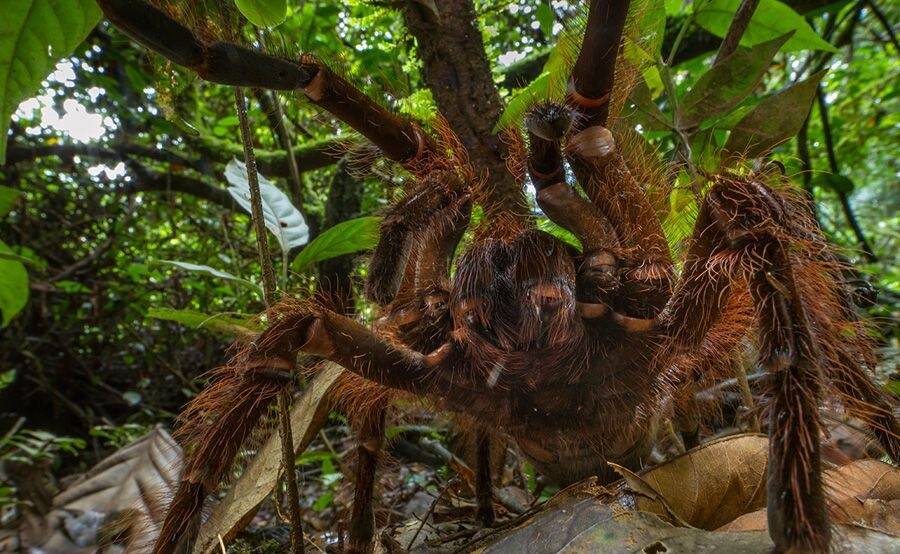 Piotr NaskreckiBased on weight and mass, the Goliath birdeater is the largest spider on the planet.

The Goliath birdeater is one of the world’s most recognizable arachnids. Its impressive size allows it to prey on a variety of creatures, including birds, making it the biggest — and possibly the scariest — spider in the world.

But there is more to this Goliath spider than meets the eye.

Goliath Birdeater: The Biggest Spider In The World 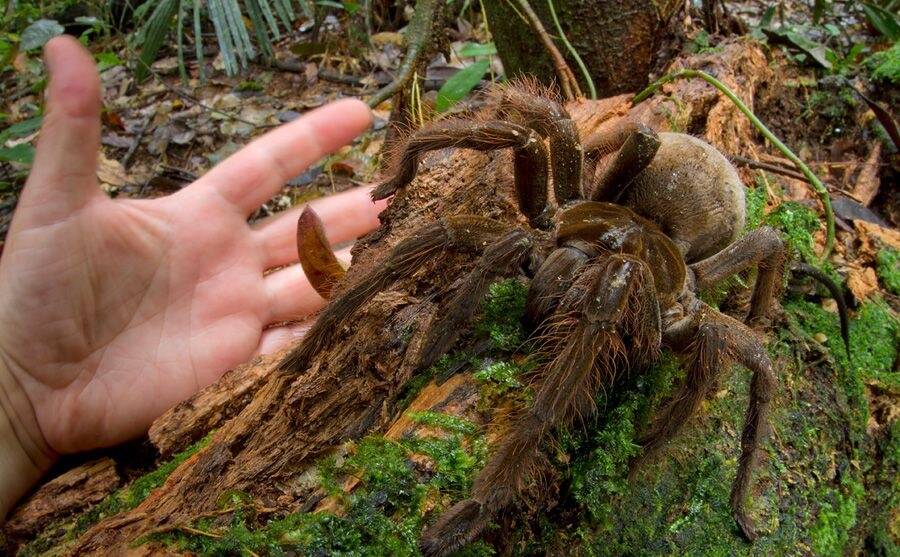 Piotr NaskreckiThese colossal arachnids are indeed large enough to prey on birds, which they do on rare occasions.

At nearly one foot wide and weighing six ounces, the Goliath birdeater is the biggest spider on the planet in terms of weight. However, they drop down to second place behind the giant huntsman spider for the honor if measuring by leg span.

Indeed, the Goliath birdeater (Theraphosa blondi) can easily strike fear in the hearts of those who come upon it. It has a large body covered in barbed hairs known as urticating hairs — which are both intimidating and painful if ever caught on another creature’s skin — and equally enormous fangs.

This giant spider breed makes its home on the dusty forest floor of the rainforest in northern South America. It creates silk-lined burrows under the forest rocks and roots in parts of Venezuela, French Guiana, and Brazil. 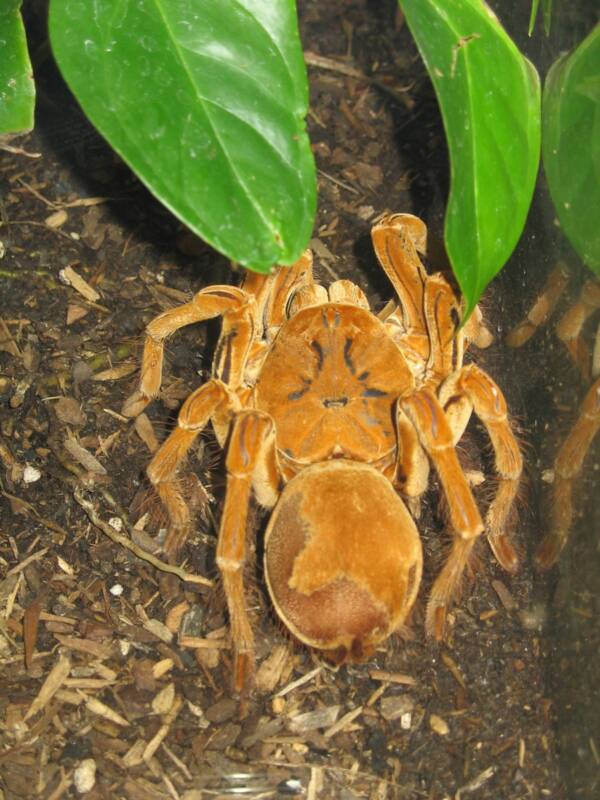 Wikimedia CommonsDespite their scary appearance, these spiders have terrible eyesight.

When preparing to attack prey or fend off forest predators like the coati, the Goliath birdeater rises on its hind legs to make itself appear even bigger, showing off its long limbs and inch-long fangs.

As part of this intimidation tactic, the Goliath tarantula rubs its hairy legs together — a common technique called stridulation that is used by other spiders, snakes, and insects — to create a hissing noise that can be heard from 15 feet away.

This leg-rubbing also releases the sharp hairs which stick and cause discomfort when they come into contact with skin, creating the perfect diversion for the giant tarantula to escape an imminent threat.

Do They Really Eat Birds?

The Goliath birdeater’s name has given the spider a terrifying reputation, but the reality is less scary than it sounds. Although it has the physical ability to prey on birds — and occasionally it does — the so-called Goliath bird-eating tarantula mainly preys on frogs, insects, and rodents.

The Goliath birdeater is nocturnal and typically hunts at night. These fearsome arachnids actually have terrible eyesight so they use the hair on their legs to catch the vibrations from animal activity, be it predator or prey.

These tarantulas are stealthy hunters who wait until a victim is close enough for them to pounce on and trap within their leggy embrace. Their big fangs are strong enough that they can easily slice through flesh, including human skin. As its victim tries to struggle free, the spider releases neurotoxic venom, paralyzing its prey. 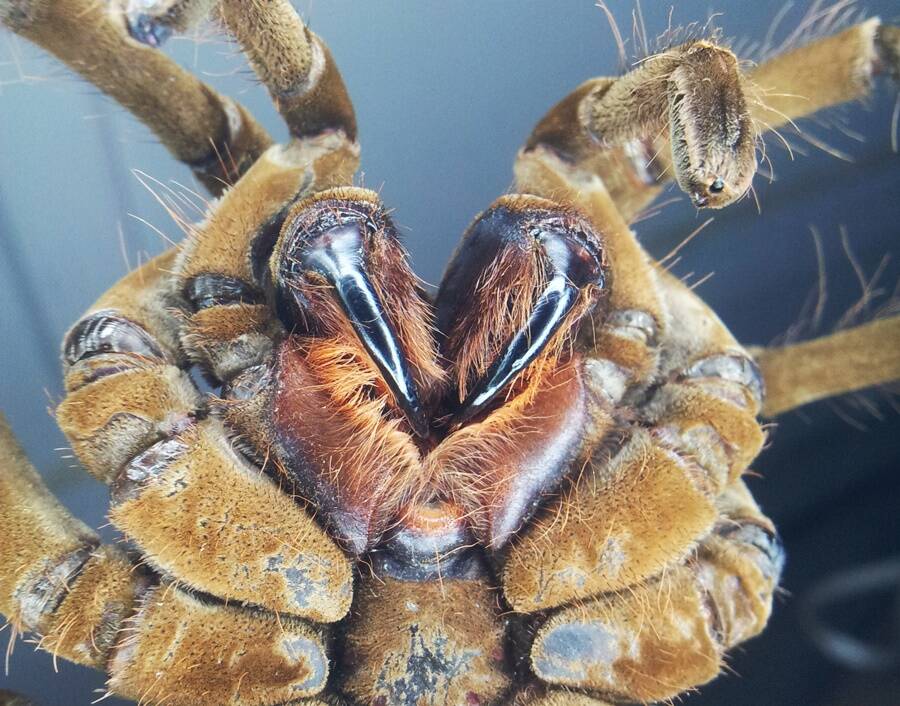 Because spiders don’t have teeth, they must liquefy the insides of their prey so they can suck it dry. The Goliath birdeater does this by regurgitating digestive juices onto its victim which breaks down soft tissue, turning the insides into a slurpy concoction. By the time the Goliath tarantula finishes feeding, only bones, skin, and fur remain.

But if the Goliath birdeater doesn’t kill birds as frequently as its name suggests, where did the scary nickname come from?

The name “birdeater” originated from an 18th-century engraving that showed another kind of tarantula eating a hummingbird. The discovery inspired the moniker “birdeater” which is now used to describe the entire Theraphosa spider genus of South America. 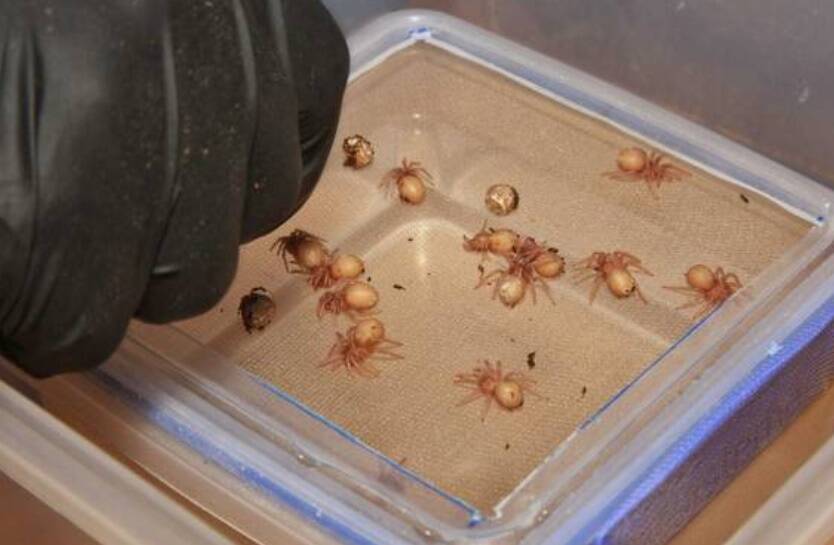 Human encounters with the Goliath birdeater are rarely lethal. Although their venom is dangerous enough to kill their prey, it is relatively nontoxic to humans. A Goliath birdeater bite would likely only cause some discomfort and swelling.

A bite from the Goliath bird-eating tarantula can become deadly, however, if the person bitten has an allergic reaction to the venom or if the puncture wound becomes infected.

By now, it seems that the Goliath birdeater’s notoriety has more to do with their size rather than the actual danger they pose. Their unique appearance has made them a hot commodity in the world of exotic pets, but that popularity might be a double-edged sword.

Goliath birdeaters are listed as Not Evaluated by the International Union for Conservation of Nature or IUCN, the body which monitors the status of the planet’s wildlife. Because of this, the current situation of their species is unknown. But their status as quirky pets and the low-level harm they pose to humans could have an effect on their population. 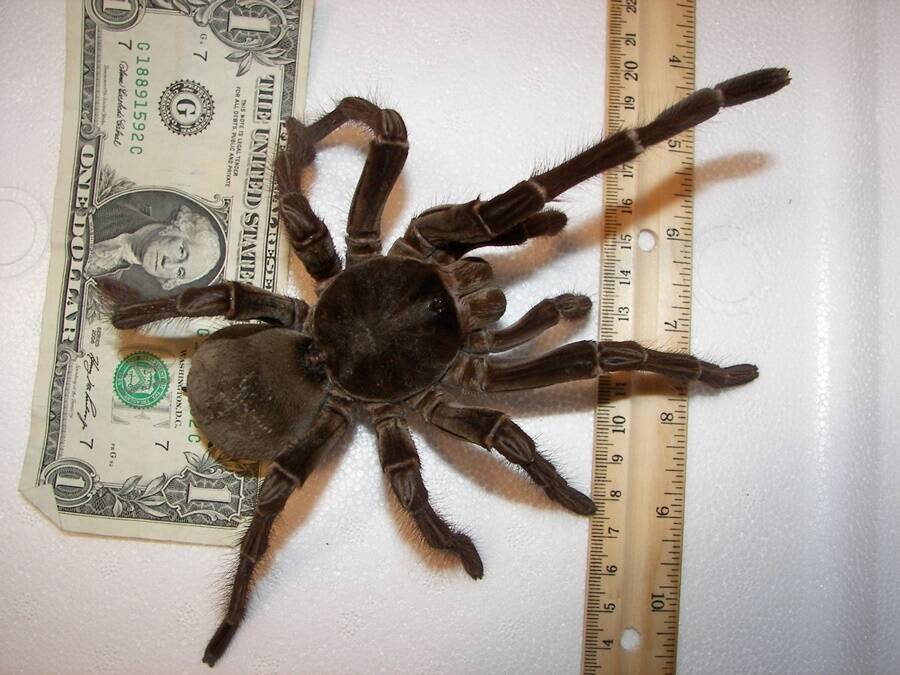 FlickrThese enormous tarantulas are viewed as exotic pets to some.

The Wellington Zoo in New Zealand is among the few places known to breed these Goliath spiders in captivity. In May 2020, zoo officials announced the successful hatching of 13 Goliath bird-eating spiderlings at their facility.

“We’re excited to announce that we have successfully bred Goliath bird-eating tarantulas…They are an absolutely fantastic species that we’re really proud to be working with,” said Dave Laux, the zoo’s team leader of reptiles and invertebrates of the event. He added that the spiderlings were “really, really big” and their coloring was a “beautiful mahogany brown.”

Goliath birdeaters are usually solitary creatures and only seek out other spiders when it comes time to mate. Female Goliaths use their urticating hairs to cover their tennis ball-size egg sacs which typically hold between 50 and 200 eggs.

In the wild, hatchlings stay close to their mother until they fully mature at two to three years. Meanhile, the father will usually die a few months after mating.

In captivity, the lifespan of bird spiders can be anywhere between 10 to 15 years, though females have known to live up to 20 years.

Now that you’ve learned all about the terrifying truth of the Goliath birdeater, read how tarantula venom could offer a cure for a deadly children’s disease. Next, meet the banana spider, the arachnid whose web is made out of the strongest natural material known to man.