The eight-foot oaken idol was likely used to commune with the spirit world, or "Otherworld" of Celtic Paganism. 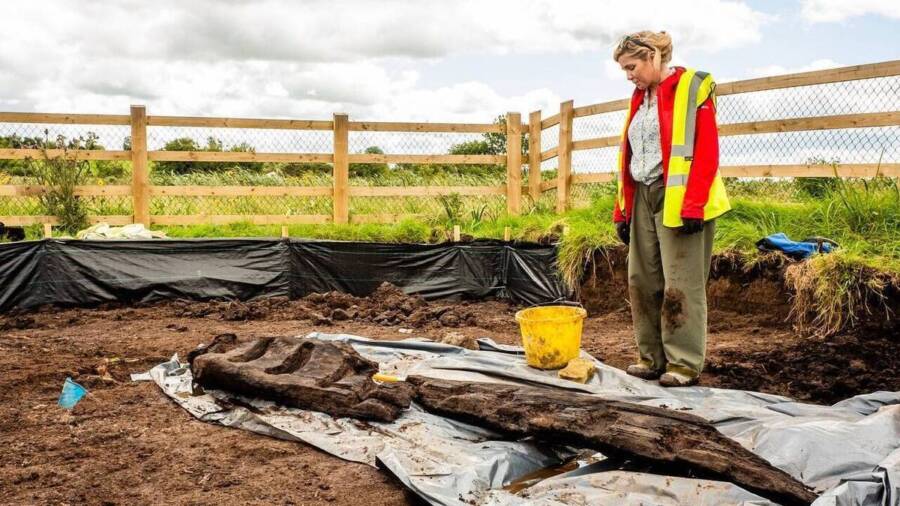 Archaeological Management SolutionsOne of only a dozen idols of its kind ever found in Ireland, the “Gortnacrannagh Idol” is the largest.

With construction on Ireland’s N5 Ballaghaderreen highway in County Roscommon about to begin, it was important to survey the area beforehand to ensure nothing historical would be destroyed. Remarkably, a team from Archaeological Management Solutions (AMS) uncovered a 1,600-year-old pagan idol as a result.

Built from the trunk of a split oak tree dating to the Iron Age, the wooden artifact was constructed about a century before St. Patrick arrived in Ireland. Preserved in a bog in Gortnacrannagh all along, the ancient artifact was carved to have a human-shaped head at one end and several horizontal carvings along its body.

Most remarkable of all is that only a dozen such idols have ever been found in Ireland, according to The Irish Examiner. Measuring more than eight feet, the newly-dubbed “Gortnacrannagh Idol” is now officially the biggest ever discovered. According to lead excavator Dr. Eve Campbell, its purpose was likely ritualistic:

“It is likely to be the image of a pagan deity. Our ancestors saw wetlands as mystical places where they could connect with their gods and the Otherworld. The discovery of animal bone alongside a ritual dagger suggests that animal sacrifice was carried out at the site and the idol is likely to have been part of these ceremonies.” 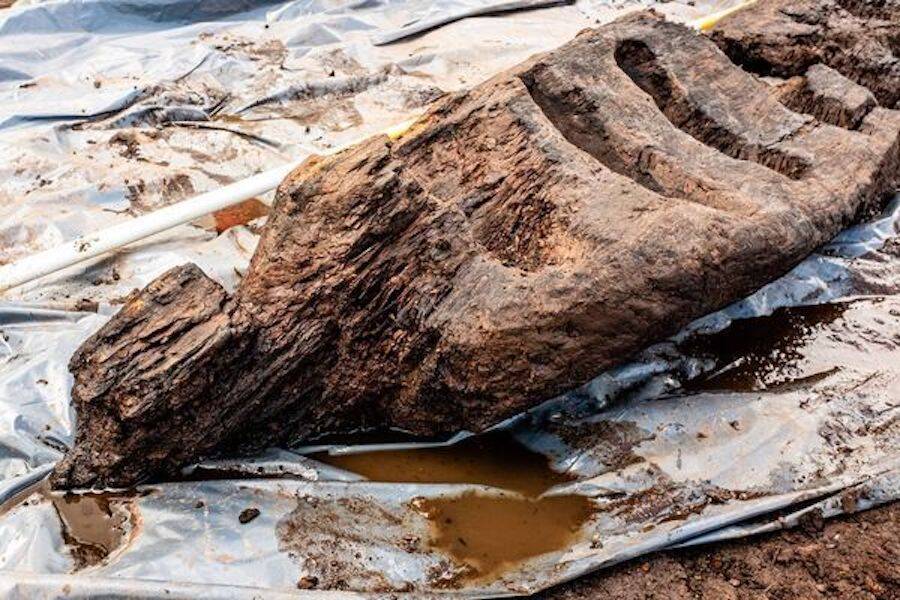 Archaeological Management SolutionsLonger than eight feet, the pagan idol had a human-shaped head carved out of one end and several horizontal carvings across its body.

The Gortnacrannagh bog in question is only six miles from the royal and prehistoric site of Rathcroghan. According to the Rathcroghan Visitor Center, it is one of the six Royal Sites of Ireland and contains 240 archaeological sites dating from the Neolithic and Bronze Ages to the Iron and Middle Ages.

While this idol is the largest of its kind ever found in Ireland, wood specialist Cathy Moore believes they all had similar purposes.

“The lower ends of several figures were also worked to a point suggesting that they may once have stood upright,” said Moore.

“Their meaning is open to interpretation, but they may have marked special places in the landscape, have represented particular individuals or deities or perhaps have functioned as wooden bog bodies, sacrificed in lieu of humans.” 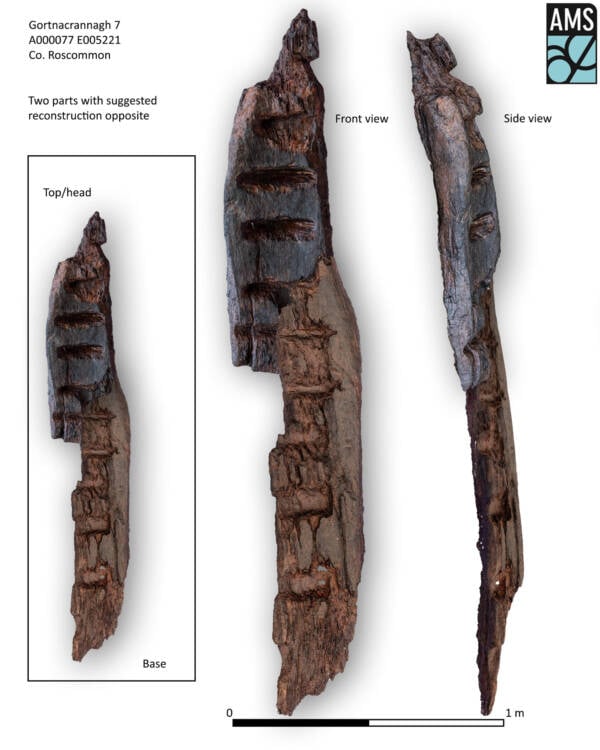 Archaeological Management SolutionsFront and side profiles of the idol.

As it stands, the artifact itself has been transported and secured at University College Dublin (UCD). There, under the eye of conservator Susannah Kelly, it will be carefully and thoroughly preserved for the next three years.

Meanwhile, AMS researchers have begun to collaborate with the UCD Center for Experimental Archaeology and Material Culture, as well as the UCC Pallasboy Project, to construct a replica of the idol. Dr. Ros Ó Maoldúin of the AMS said this will “help us understand the idol better and appreciate how it was made.”

Ultimately, the fortuitous find has only made officials more appreciative of archaeological surveying prior to large-scale construction projects. According to The Journal Ireland, this particular excavation was funded by the Irish government in collaboration with Transport Infrastructure Ireland and Roscommon County Council.

“Road projects such as the N5 provide a significant opportunity for the investigation of our archaeological heritage,” said Deirdre McCarthy, resident archaeologist with Roscommon County Council. “Gortnacrannagh is an excellent example. Were it not for the road, we would never have known about this extraordinary site.” 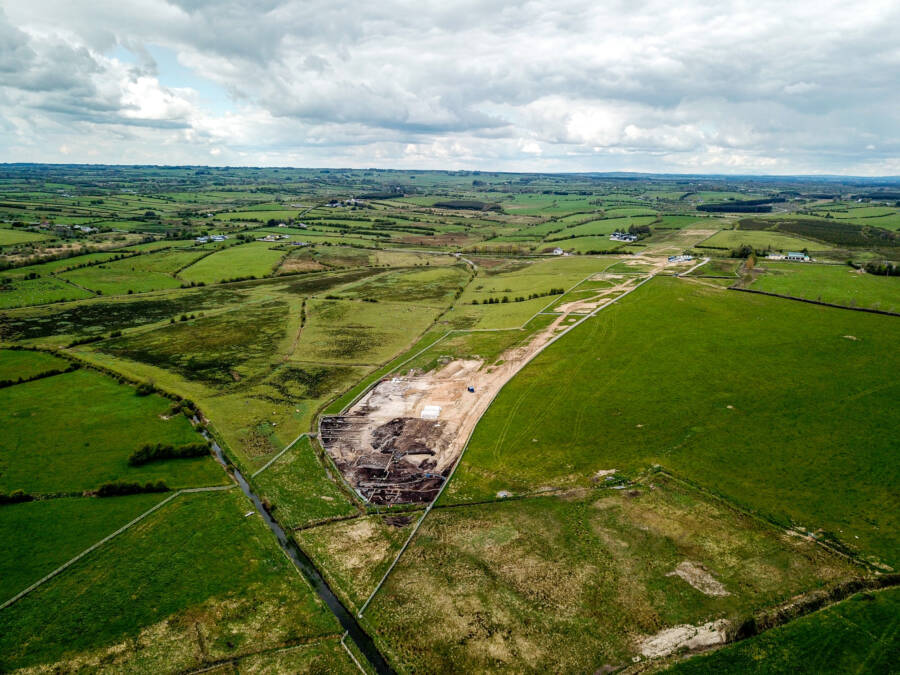 While any detailed findings of the idol are to be published in a book by Transport Infrastructure Ireland, the replica is set to be displayed at the Rathcroghan Visitor Center upon completion. As for its more ancient and invaluable counterpart, it will be exhibited at the National Museum of Ireland after conservation concludes.

Ultimately, it appears that only two favorable scenarios allowed experts to uncover this historic piece of Irish culture: the waterlogged conditions of the bog in Gortnacrannagh which kept it from corroding, and the responsible decision to survey the area prior to construction.

Now, researchers hope more revelations regarding the idol’s purpose are to come.

After reading about the 1,600-year-old pagan idol unearthed from an Irish bog, learn about fishermen finding a massive 10,000-year-old “Irish elk” skull. Then, read about the history of Moloch, the ancient god of child sacrifice.