Did 16-year-old Grace Marks of Alias Grace fame actually help murder her employer and his lover — or was she unfairly locked away? 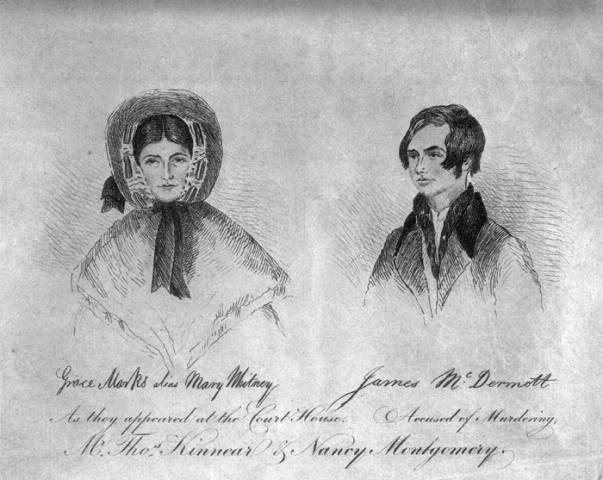 One murdered pair of lovers and one supposedly murdering pair of servants dominated Canadian headlines in 1843 — and continues to fascinate countless people today. But did Grace Marks and James McDermott actually murder Thomas Kinnear and Nancy Montgomery? The truth about who actually committed this gruesome killing, recently at the heart of Netflix’s Alias Grace, may never be known for sure.

The Victims And The Killers

One summer day in July 1843, a gruesome discovery was made in what is now Ontario, Canada. The bodies of Thomas Kinnear and his housekeeper Nancy Montgomery were found in his home. The pair (who also happened to be lovers) had been brutally murdered, with Kinnear shot and Montgomery struck on the head and then strangled.

It didn’t take long for the police to track down the two likeliest suspects: 20-year-old James McDermott and 16-year-old Grace Marks, both Irish-born servants in the Kinnear household who had vanished in the wake of the crimes, taking a bundle of stolen goods with them.

Both the brutality of the crime and its undercurrent of sex turned the trial into a media sensation while the mystery of the crime itself has never been completely solved.

The accused themselves remain something of a mystery as well. Not much is known about the early lives of either Grace Marks or James McDermott before their trial.

what we do know is that Grace Marks was born in Ulster, Ireland and emigrated to Canada with her family in 1840, when she was 12 years old. McDermott had likewise come to Canada from Ireland in 1837 and previously served in the 1st Provincial Regiment of the Providence of Lower Canada before being hired to work for Kinnear. Marks was hired to work for Kinnear as well about a week after McDermott.

Marks claimed “everything went on very quietly for a fortnight,” other than that she witnessed Montgomery scolding the newly-hired McDermott for “not doing his work properly.” McDermott, however, claimed that “[Marks] and the Housekeeper used to quarrel,” although he also admitted Montgomery had been “overbearing” to him and that he had complained to Kinnear, “[I] did not like that Nancy should scold me so often.” Both McDermott and Marks each claimed that the other had been mistreated by Montgomery and in turn plotted to murder her.

The Trial Of Grace Marks 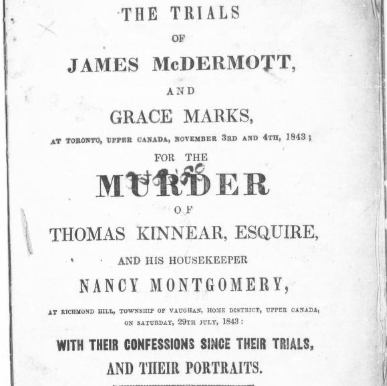 Accounts of the trial tend to either cast Grace Marks as the cunning instigator of a brutal crime who overwhelmed McDermott with her wicked wiles or as an unwitting and somewhat dimwitted accomplice who had instead been strong-armed into the murder by the more powerful McDermott. And the defendants themselves seemed only too eager to help paint these exaggerated portraits of each other in order to save their own skins.

That said, McDermott did not deny his participation in the murder, but did claim that “I should not have done it if I had not been urged to do so by Grace Marks,” who had called him a coward and threatened he “should never have an hour’s luck” if he did not assist her.

According to Marks, however, McDermott explained his plan to kill both Kinnear and Montgomery and make off with their valuables before making her “promise to assist him.” The next afternoon, she claimed that she saw “McDermott dragging Nancy along the yard” while she was pumping water outside. When she returned to the kitchen, McDermott asked her for a handkerchief because Montgomery was not yet dead, before going down into the cellar to finish the job. When he re-emerged after strangling the housekeeper, he told Marks that her life was “not worth a straw” if she told anyone.

Although Marks had clearly hoped her confession would pin the blame on McDermott, it does contain some bizarre comments that call into question how much of a supposedly unwilling accomplice she was. For example, she admitted that she yelled at McDermott to take Montgomery outside rather than bludgeon her in the house, shouting “for God’s sake don’t kill her in the room, you’ll make the floor all bloody.” Additionally, after the murders, Marks also admitted to helping McDermott “pack up all the valuable things we could find” before the pair fled and were eventually apprehended in the first place.

However, in his version of the story, McDermott claimed that Marks “was the means [of the murder] from beginning to end” and even added in the gruesome detail that the maid had descended to the cellar several times in order to strip Mongomery’s body of valuables and that only his own persuasion kept her from ripping the earrings off the corpse.

The Fate Of “Alias Grace” 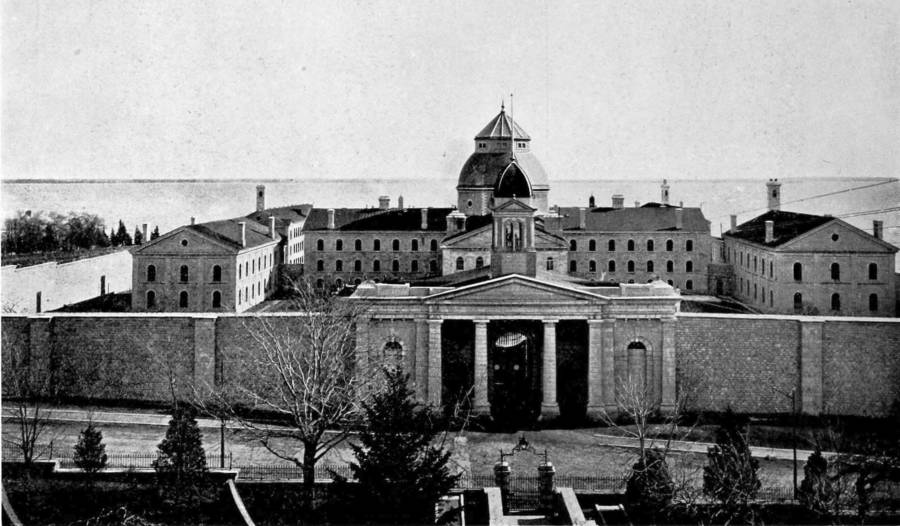 Wikimedia CommonsKingston Penitentiary, where Grace Marks was imprisoned after her trial.

Despite their finger-pointing, both Grace Marks and James McDermott did confess to complicity in the murders. McDermott was shown no mercy and hanged, but, perhaps because of her youth or her gender, the court took pity on Marks and sentenced her to life imprisonment rather than death.

She wound up serving a total of 29 years in prison before being granted a pardon in 1872. After her release, she crossed the border into New York and seemingly vanished from history, taking the truth about what had happened that day in July 1843 with her.

With the truth about the case still unclear, Grace Marks remains a fascinating enigma to this day. This is partly due to the popularity of Margaret Atwood’s fictionalized retelling of the murders, Alias Grace, published in 1996. This award-winning take on the crime and its aftermath was then turned into a popular Netflix series (also called Alias Grace) in 2017.

But as for what really happened to Thomas Kinnear and Nancy Montgomery, the full story went to the grave with James McDermott and Grace Marks.

After this look at Grace Marks and the true story of Alias Grace, read about the gruesome crimes of the Death House Landlady. Then, discover the story of Myra Hindley, who carried out the “Moors murders” of several children alongside her lover, Ian Brady.