For five years across 2008 to 2019, marine experts at Isla Guadalupe have spotted sucker marks and scars on a total of 14 great white sharks. 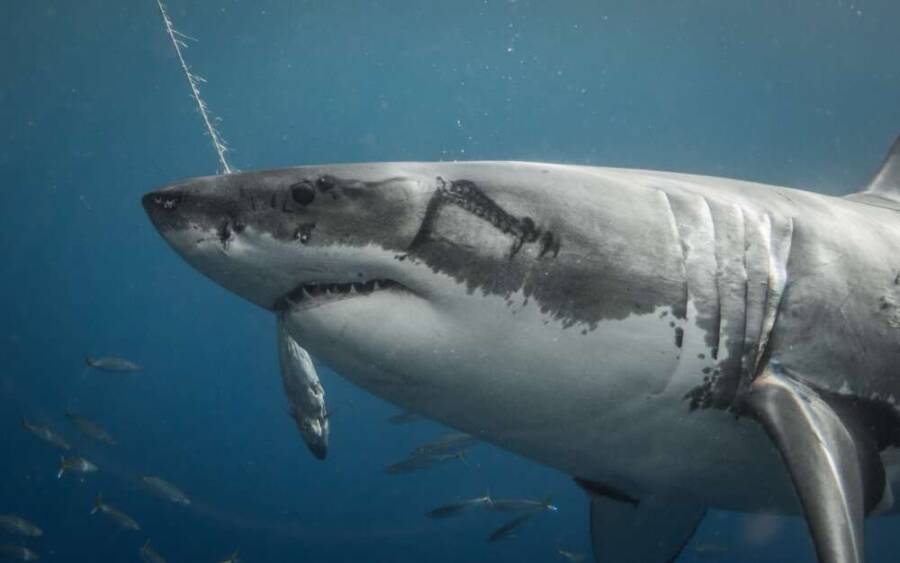 Becerril-García et al. 2020A great white shark with the type of scarring observed between 2008 and 2019.

According to a newly released study, marine scientists have found evidence that suggests great white sharks (Carcharodon carcharias) in the Pacific Ocean are being attacked by gigantic squids. The stunning claim comes from scars and sucker marks found on the fearsome predators.

Though the idea of an enormous tentacled creature battling a shark with razor-sharp teeth sounds like a vintage monster movie, according to Forbes, the encounters have been officially documented around Guadalupe Island off the Baja, California coast.

Published in the Scientific Reports journal, the study examined 14 great white sharks with peculiar scars on their bodies observed across five years between 2008 and 2019. Most of the specimens had yet to reach adulthood at the time, and the unusual marks almost universally appeared on their heads and trunks. 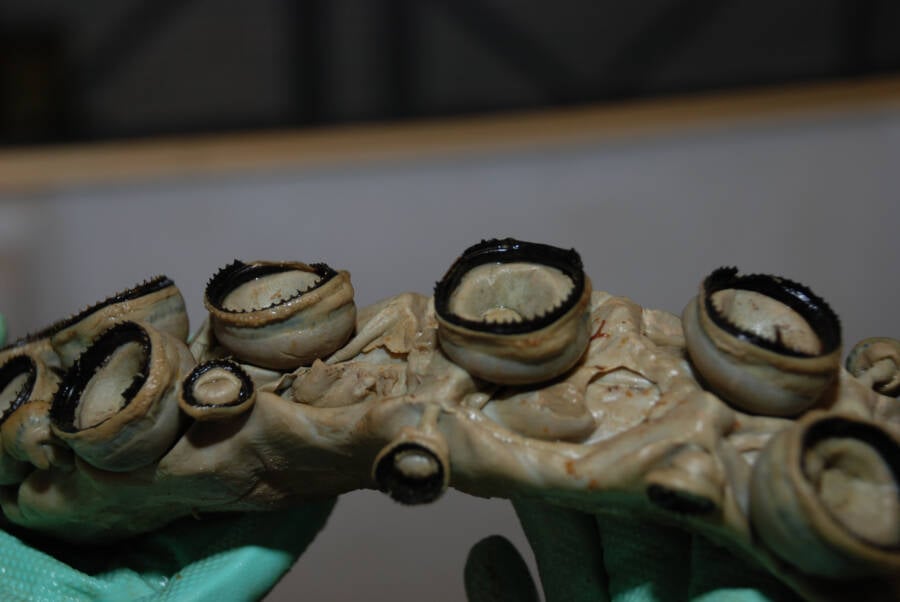 “The scars observed on the white sharks were double or single layers with multiple sucker marks around the shark’s head and in the trunk between the dorsal and pectoral fins,” the study explained. “Wounds near the shark’s mouth and trunk suggest a defensive response from squid to the white shark.”

Known as Isla Guadalupe, the volcanic island is a significant feeding site for the apex predators. With pristine visibility characterizing the waters, both researchers and tourists alike routinely travel to its waters to study or watch the animals in their habitat.

Interactions between sharks and cephalopods aren’t new. Species such as blue sharks, for instance, get half of their diet from these predatory mollusks. Rich in protein and carbohydrates, squids are an important part of these sharks’ healthy diet. Accounts of great whites interacting with large squids, however, are sparse — and make this study invaluable.

The largest predatory fish on Earth, great white sharks grow to an average length of 15 feet — with some specimens longer than 20 feet having been officially recorded in the past. They’re found in fairly cool and coastal waters around the world. On the surface, it seems like nothing save for orcas could threaten these animals.

Eastern areas of the North Pacific Ocean provide a fertile opportunity to reconsider that, however. In range of the region’s great white sharks, these are hotspots of substantial squid activity. There’s a large variety of them there, too, ranging from foot-long neon flying squids and purpleback squids to jumbo squids — and giant squids that can grow up to 46 feet. 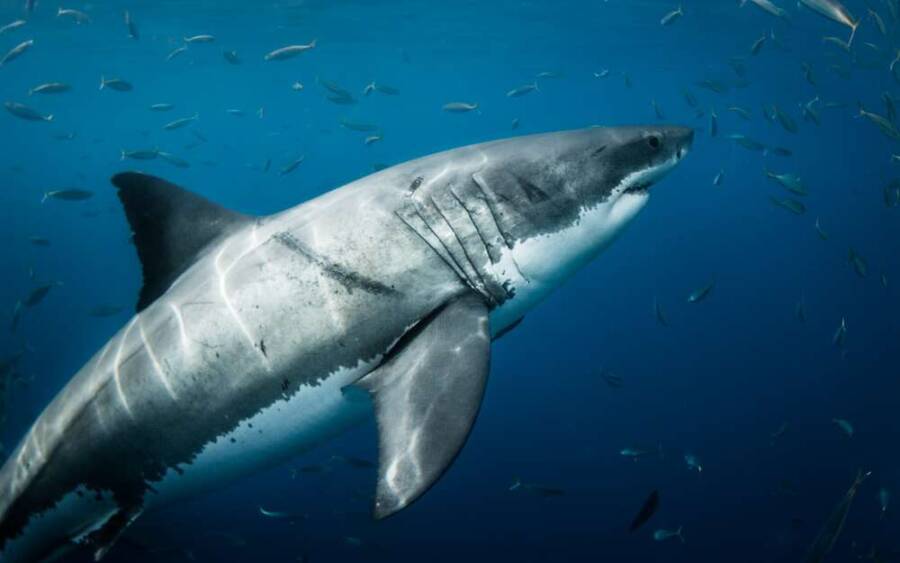 Becerril-García et al. 2020The vertical movements of great whites in the so-called “twilight zone” is typical foraging behavior for the species. Curiously, it occurs at depths inhabited by numerous squids.

With interactions between these species and great white sharks being rather rare, marine experts have heartily welcomed the latest study. Among numerous benefits is the invaluable light it has begun to shed on the importance of squid as prey for subadult and adult great whites.

The fascinating encounters are currently believed to occur at great depths. It’s well established that subadult and adult great white sharks routinely dive down to the “twilight zone,” a layer of water beyond sunlight’s reach between 650 and 3,300 feet deep. Their vertical movements here are classic foraging behavior.

In the Shared Offshore Foraging Area (SOFA), great whites reach an average depth of 1,450 to 1,634 feet, while they descend deeper than 984 feet in Guadalupe. Thus, these sharks are in regular contact with a variety of animals likely to have caused the observed scars.

“Both SOFA and Guadalupe Island have been suggested as areas with a high diversity of potential prey, in which cetaceans, sharks, bony fish, and cephalopods seasonally occur,” the study said. 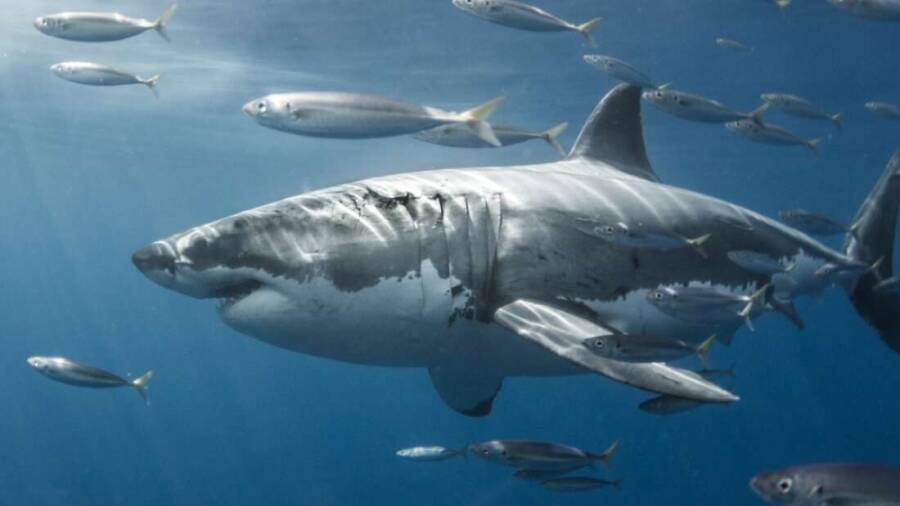 Becerril-García et al. 2020The study detailed a total of 14 great white sharks being spotted with either sucker marks, scars, or both.

Though it has yet to be proven that giant squids are responsible for the sucker marks and scarring, researchers have narrowed potential candidates down to the jumbo squid, neon flying squid, and most excitingly, their giant counterpart.

While we await more direct evidence that great white sharks battle giant squids, we’ll just have to make do with this enthralling image of shark vs. squid combat from the study:

“The fact that squid cause these marks on sharks suggest an extremely aggressive encounter between predator and prey, in which the defensive scars protrude on the head, gills and body of the white shark.”

“The suction power of the arms and tentacles of large squids is likely to deform the structure of the shark dermal denticles and hence the scars, and in some cases generate open wounds depending on the intensity of the embrace.”

After learning about new evidence of massive squids attacking great white sharks in the Pacific Ocean, watch police warn unaware paddleboarders they’re surrounded by great white sharks. Then, learn why mako sharks should scare you as much as great whites.