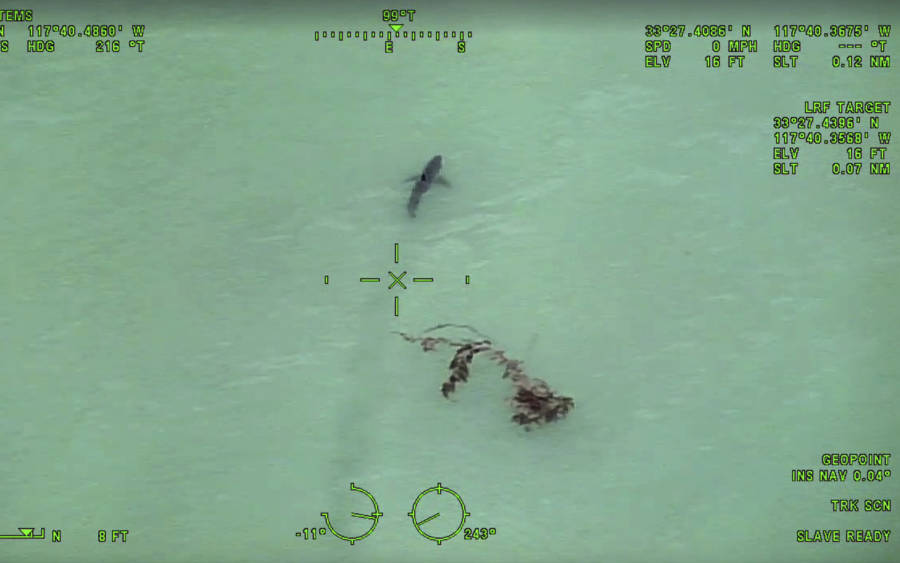 YouTubeIn this still image taken from video, a great white shark is seen swimming off the coast of California. A helicopter crew warned a group of paddleboarders to exit the water after spotting more than a dozen sharks swimming nearby.

“You are paddleboarding next to approximately 15 great white sharks,” the loudspeaker announcement boomed over the water off the coast of Orange County, California.

“They are advising you exit the water in a calm manner,” the man with the microphone, Deputy Brian Stockbridge, added. “The sharks are as close as the surf line.”

Though this sounds like a moment when most of us would panic, lifeguards said the situation wasn’t “dire,” since the sharks weren’t more than eight feet long and weren’t acting aggressively.

Stockbridge had spotted the infamous fins from a helicopter at around 2 pm on Wednesday. They were clearly visible from his vantage point, but seemed to be uninterested in the people floating nearby.

And this wasn’t the first — or the most frightening — shark encounter in Southern California in recent weeks.

Last month, a surfer was badly injured by a great white at San Onofre State Beach.

“It was definitely to the point, her hamstring was gone,” a witness told the Orange County Register. “If she didn’t receive immediate care, it was life threatening… All of the back of her leg was kind of missing.”

Rising sea temperatures might be drawing higher numbers of both sharks and people to the shoreline, researchers say. Which might just be the perfect combination for a spike in shark attacks.

With the largest of their kind stretching 20 feet long and weighing 4,000 pounds, great whites are an obvious choice for Hollywood horror.

But most adults are actually between 11 and 16 feet and don’t really have an appetite for scrawny human flesh.

“For a great white shark, a seal is a big juicy steak with a slice of chocolate cake,” Sy Montgomery, a nature writer, told The Washington Post. “A person is an old piece of celery that’s been sitting on the counter all day.”

That being said, most of us still wouldn’t want to go surfing with this:

Next, discover 15 great white shark facts that’ll shatter your assumptions. Then, check out the massive 400-year-old shark that holds the title of oldest-living vertebrate.