Capturing the Magic: The Greatest NFL Photos of All Time

Immortalizing the collective elation (or heartache) following a play in one single frame, sports and photography have been a complementary team since the invention of the first camera.

It’s in this vein that Sports Illustrated recently released what it considers to be the magazine’s greatest football photographs from its 60 years in print; a historic collection that captures memories and the raw, undiluted power of America’s national pastime. 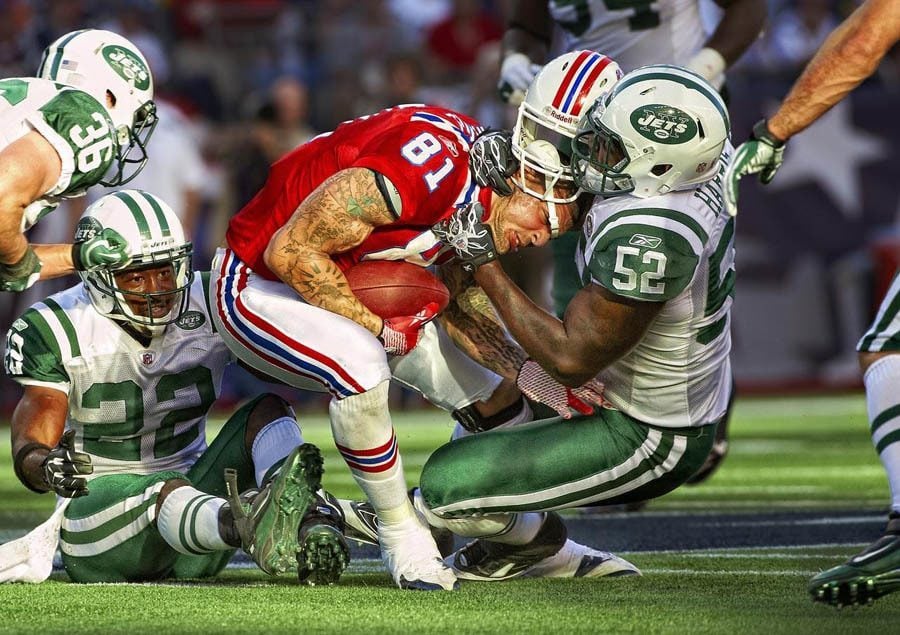 2011: Aaron Hernandez of the New England Patriots has his helmet forcibly removed by linebacker David Harris of the New York Jets. Hernandez would soon be out of the league, pending trial on multiple murder charges. 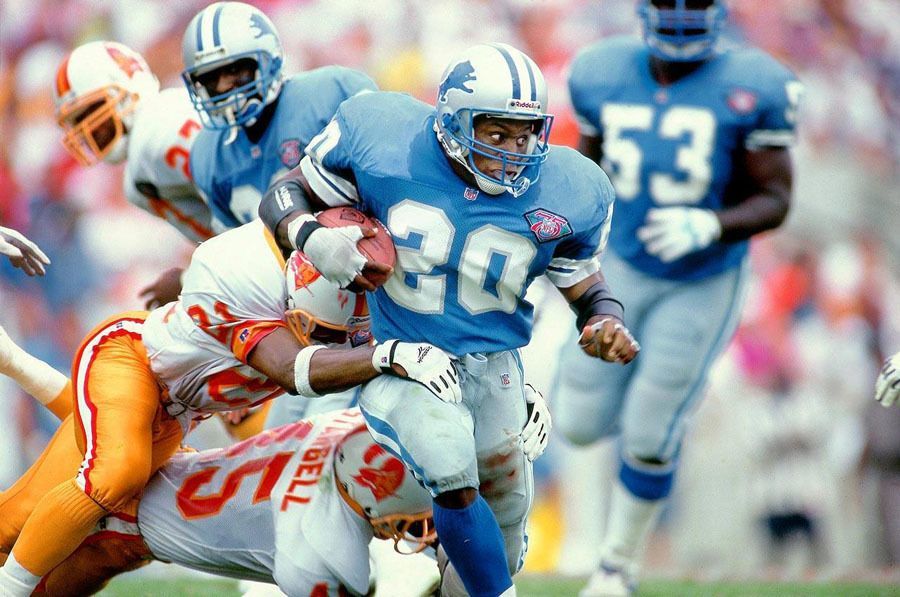 1994: NFL all-time great Barry Sanders ran like nobody before him, and nobody since. Sanders retired after the 1998 season still in the peak of his career, leaving many to wonder what his stats would look like if he had continued to play. 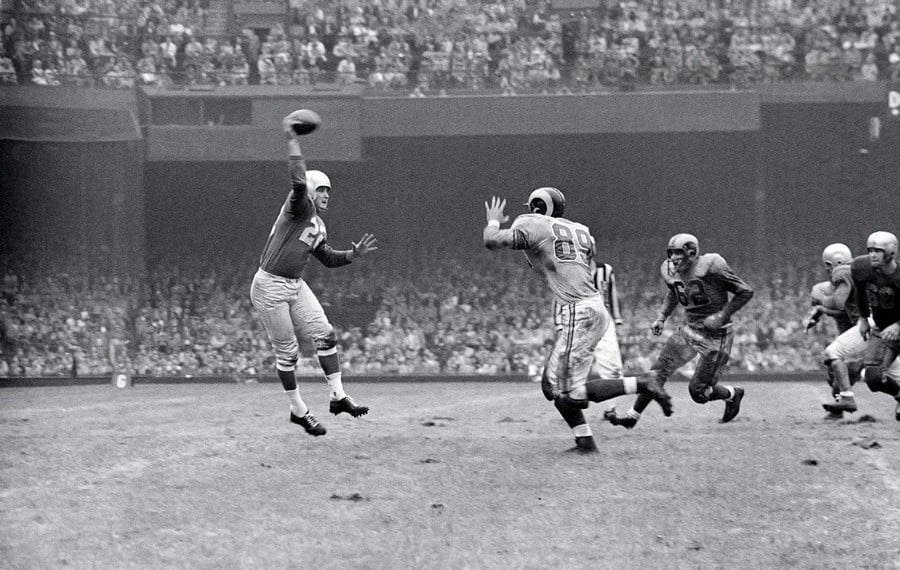 1954: Bobby Layne and the two-time defending champion Detroit Lions take on the St. Louis Rams. Layne is pictured jumping up to sneak a pass over the Rams’ defender. 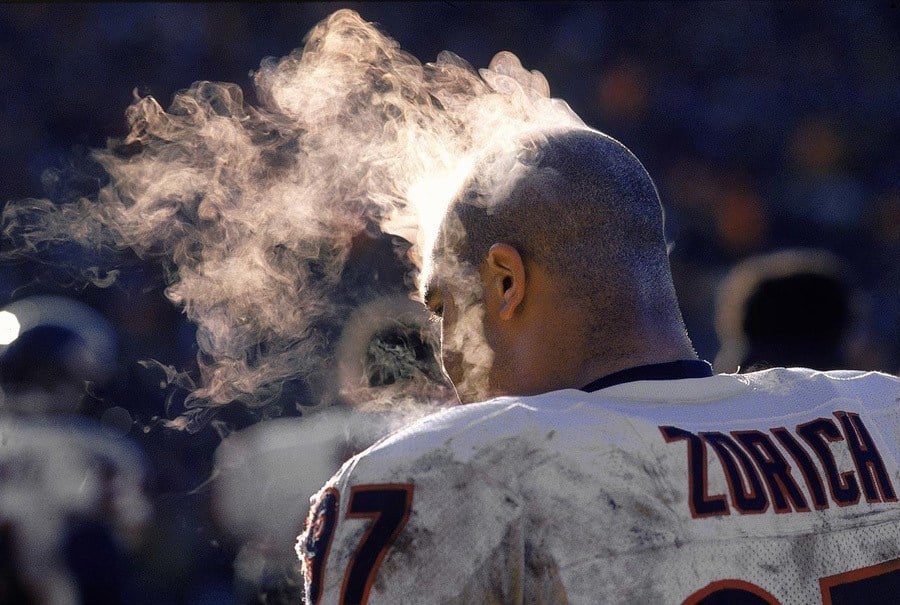 1994: Steam pours off the head of the Bears’ Chris Zorich on one of Green Bay’s 15 degree days. 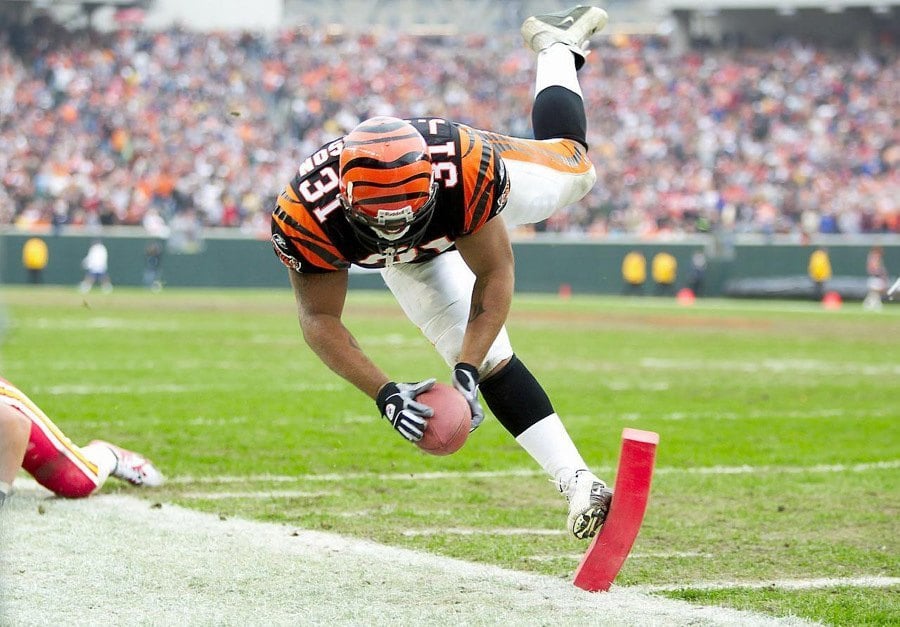 2003: Knowing that the orange pylon is by rule part of the end zone, Cincinnati Bengal’s running back Jeremi Johnson uses his foot to ensure the touchdown whilst flying out of bounds. 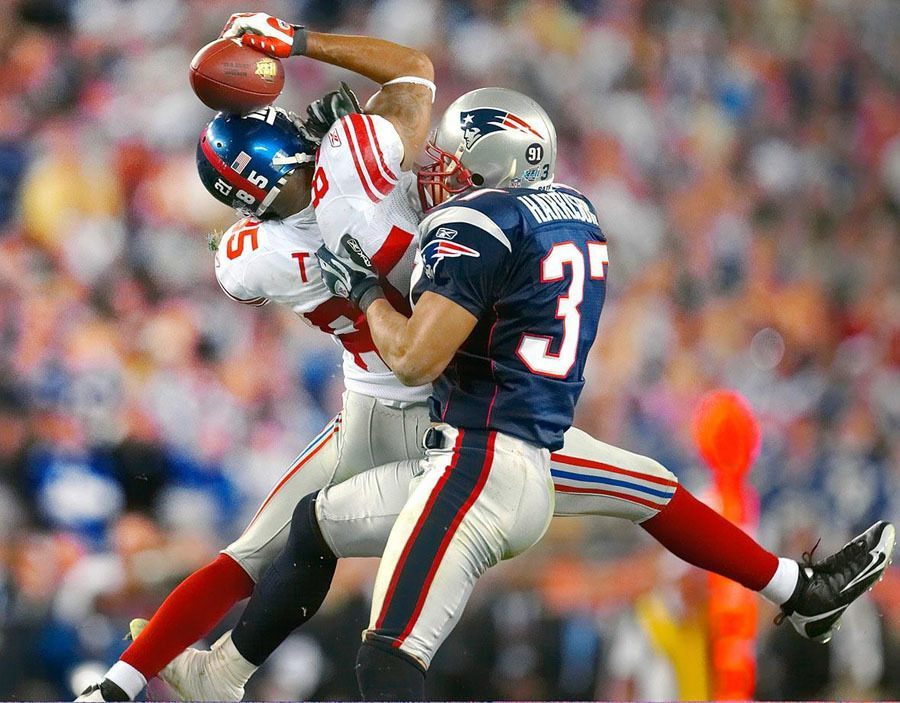 2008: In the most famous play in recent history, New York Giants wide receiver David Tyree catches a pass against his helmet to extend the drive in the final 2 minutes of Super Bowl XLII. The play enabled the Giants to continue down the field and score the game winning touchdown to defeat the then-undefeated New England Patriots. 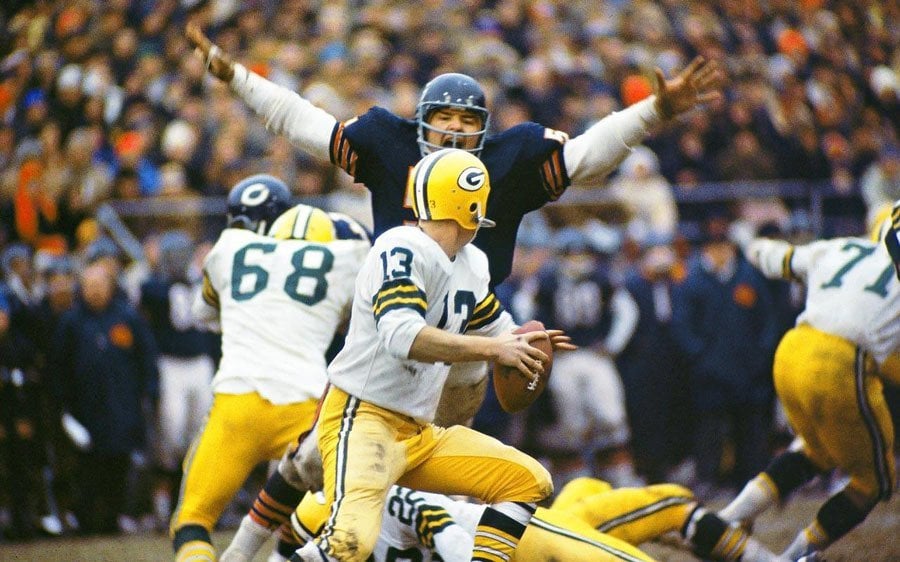 1968: Eight-time pro-bowler and NFL Hall-of-Famer Dick Butkus struck fear into the hearts of opposing quarterbacks throughout his career. Many still consider him to be among the best linebackers to ever suit up for the NFL. 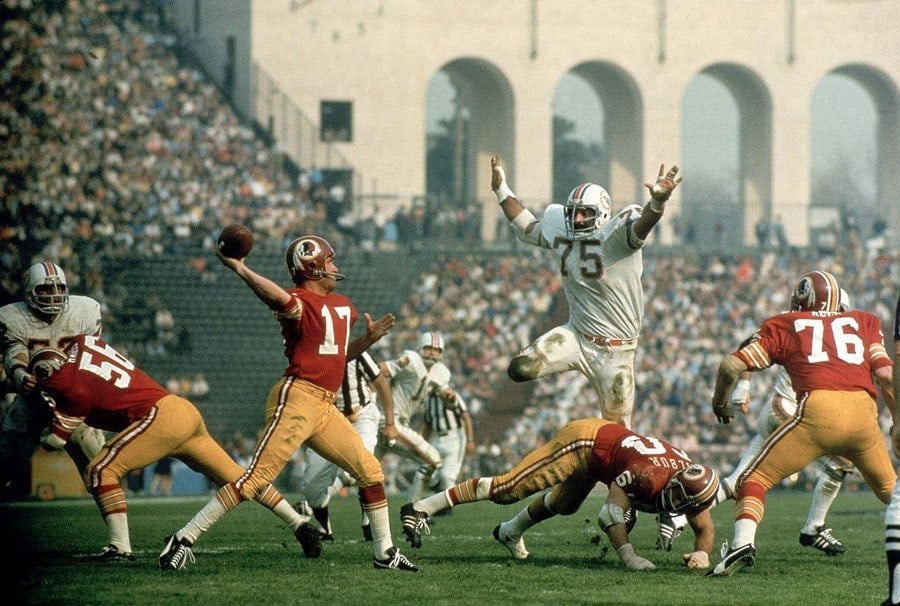 1973: Dolphins’ Manny Fernandez leaves his feet in an attempt to block the pass of the Redskins quarterback Billy Kilmer in Super Bowl VII. The Dolphins came out victorious with a final score of 14-7. 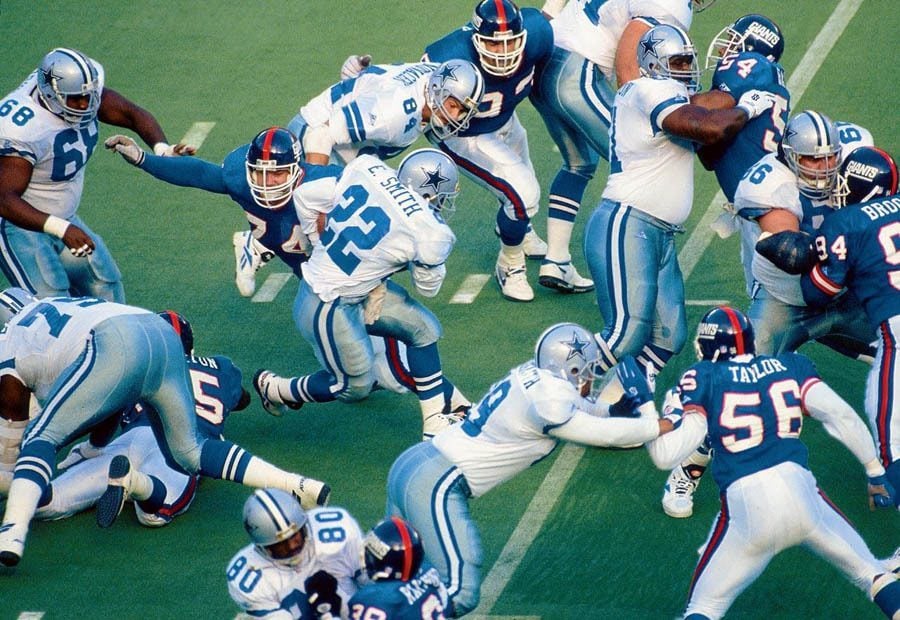 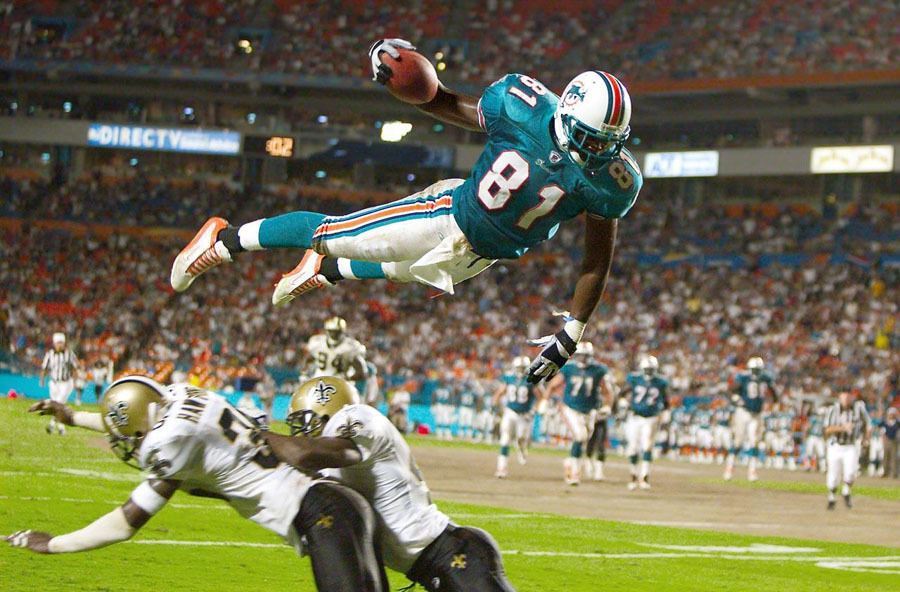 2002: Not all the great action takes place during the regular season and playoffs; Dolphins’ tight end Randy McMichael took to the air to score a touchdown in a preseason game against the New Orleans Saints. 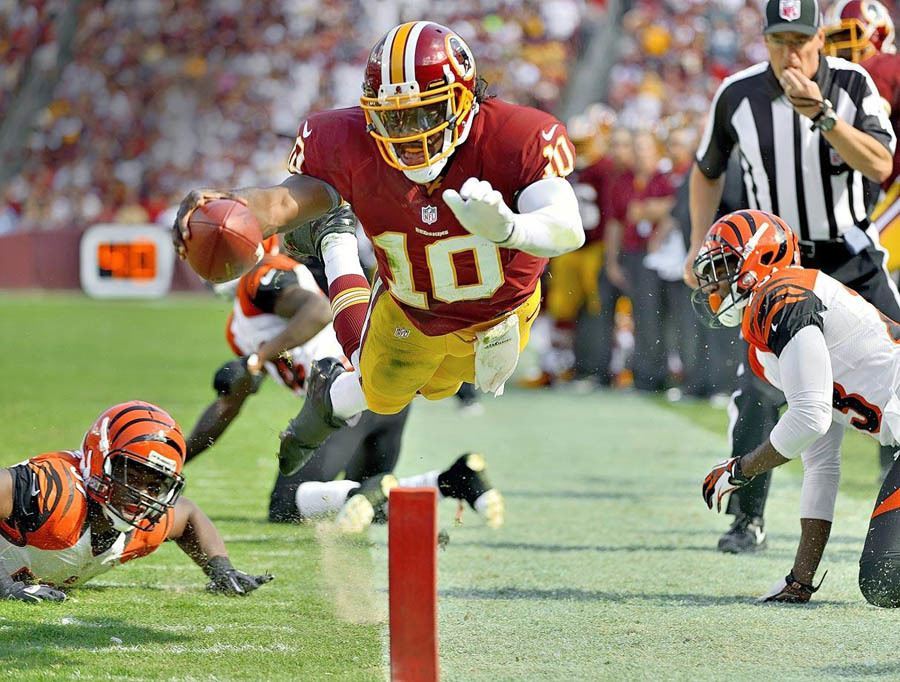 2012: Though the Redskins quarterback Robert Griffin III stepped out of bounds during the play, it nonetheless led to a thrilling photograph of him stretched towards the end zone in this midair leap. 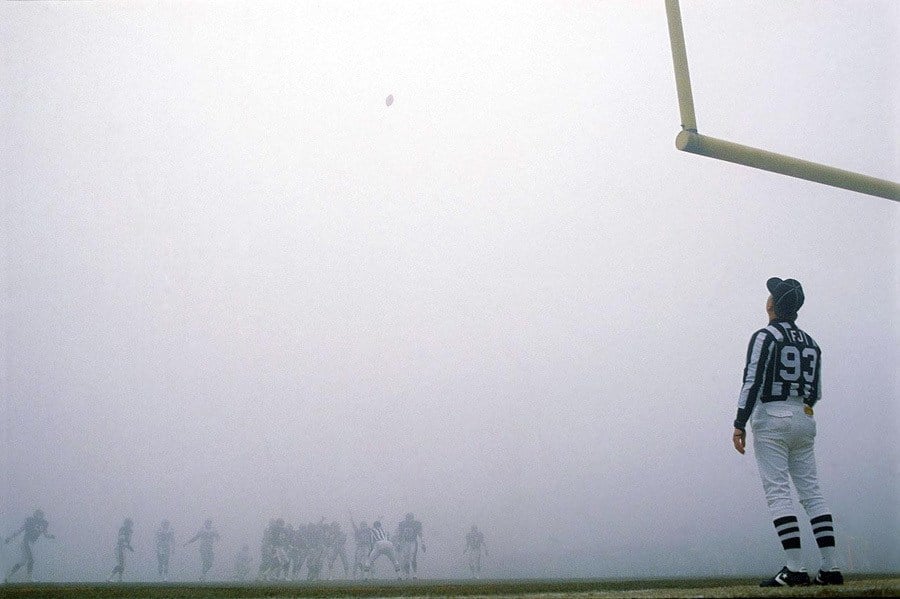 1988: The Fog Bowl saw the Philadelphia Eagles take on the Chicago Bears in an AFC Divisional Playoff game for the ages. The game is remembered more for what could not be seen, as dense fog covered the field for much of the contest. The Bears went on to win 20-12 in the extremely adverse conditions. 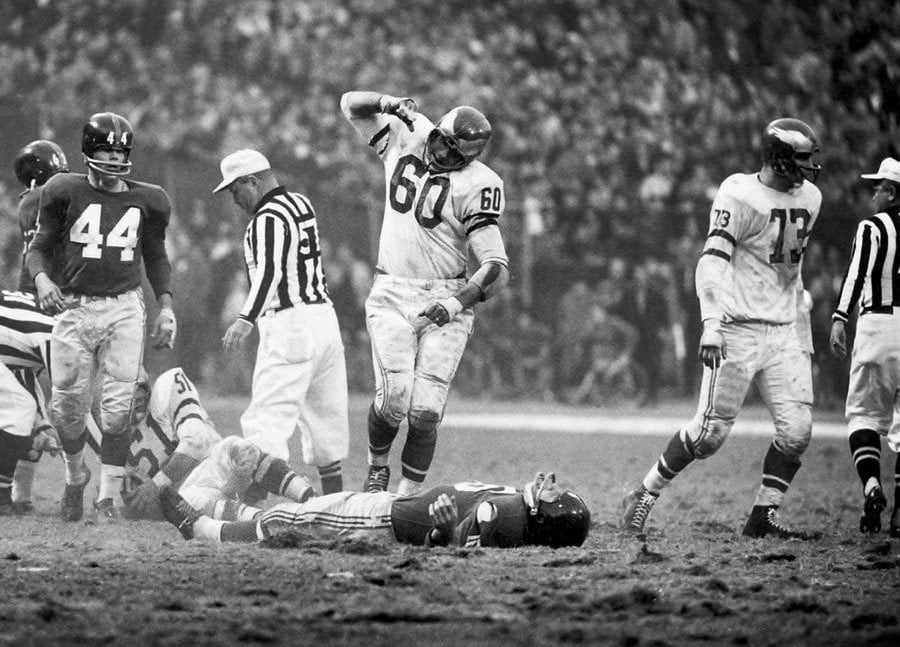 1960: Giants star Frank Gifford lies prone on the turf after a hard hit by Eagles linebacker Chuck Bednarik. This would not only ruin Frank’s day, but keep him off the field for the rest of the season. 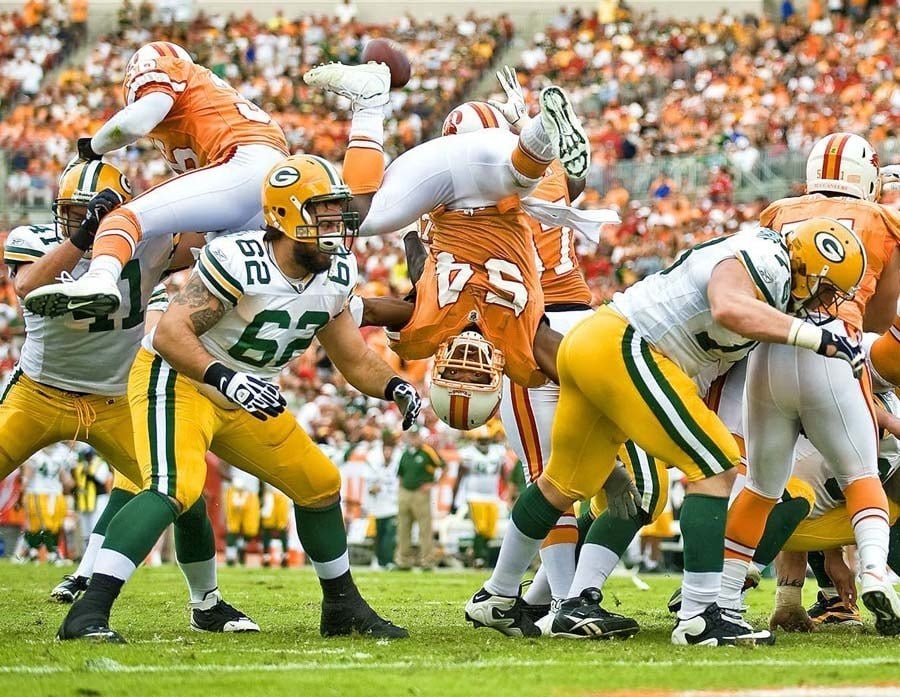 2009: Geno Hayes of the Tampa Bay Buccaneers finds himself in a precarious position during a field goal attempt by the Green Bay Packers. 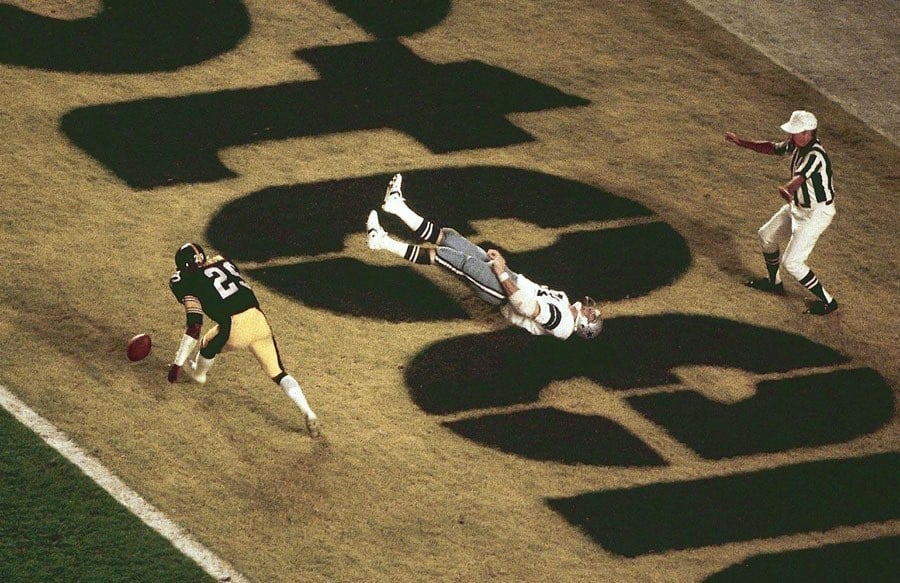 1979: The Dallas Cowboys tight end Jackie Smith drops a potential game-tying touchdown pass in Super Bowl XIII. The Cowboys settled for a field goal on the drive, and eventually lost the game 35-31 to the Pittsburg Steelers. 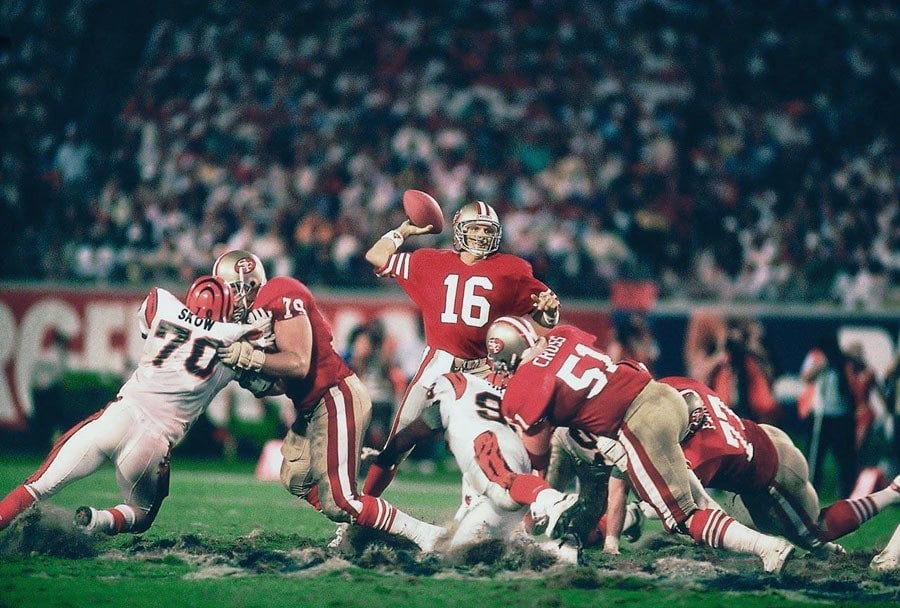 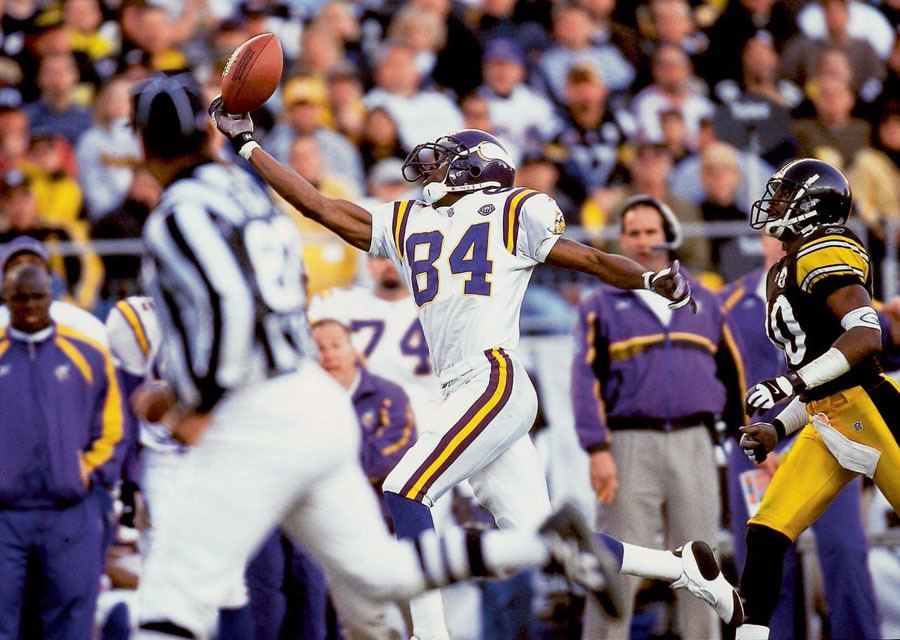 2001: Viking’s wide receiver Randy Moss makes a fingertip catch against the Pittsburg Steelers. One of the most dynamic receivers ever to play in the NFL, Moss made catches like this commonplace throughout his career. 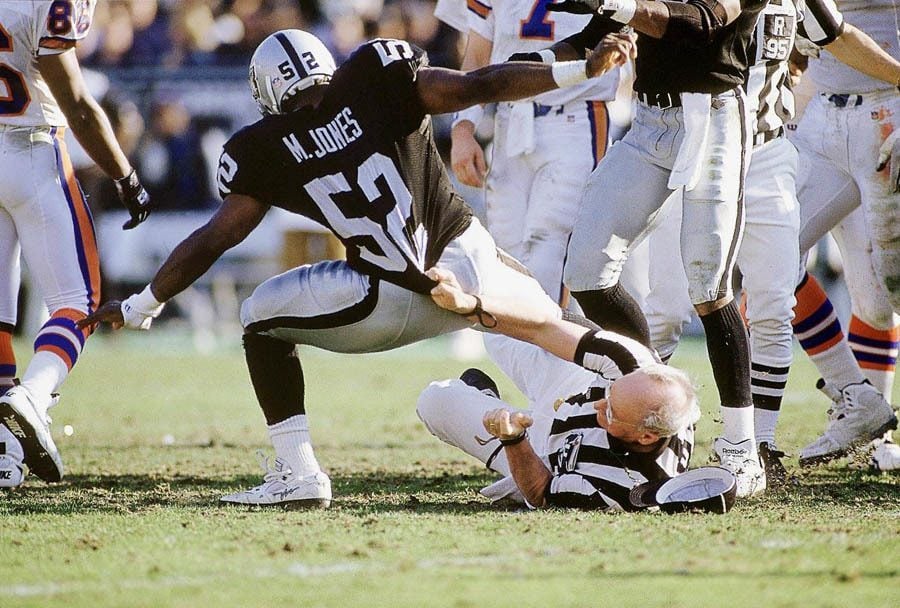 1994: Raiders linebacker Mike Jones is held by an official during the game. Surprisingly, the official did not have a penalty called against him on the play. 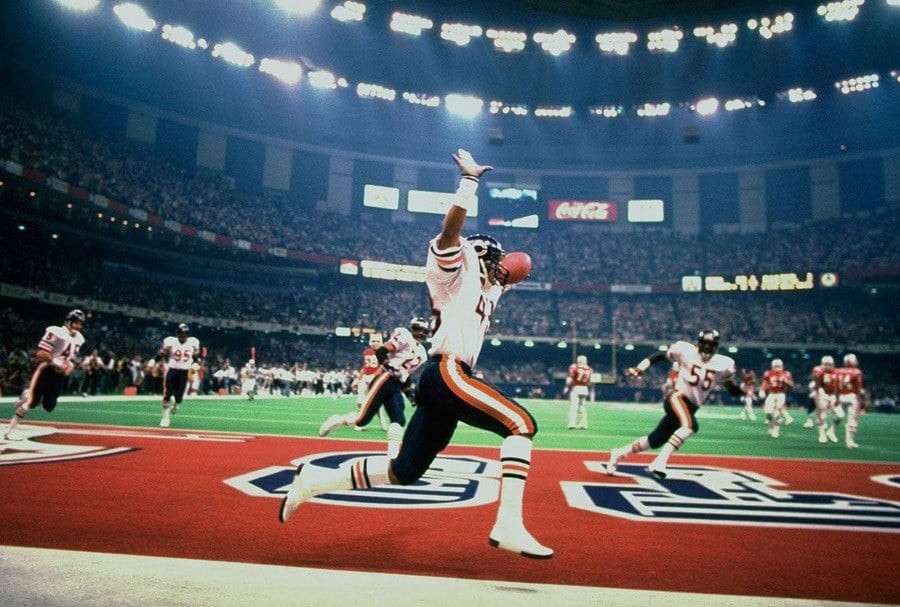 1986: The Bears’ Reggie Phillips celebrates after returning an interception for a touchdown against the Patriots in Super Bowl XX. The Bears would go on to blow out the Patriots 46-10. 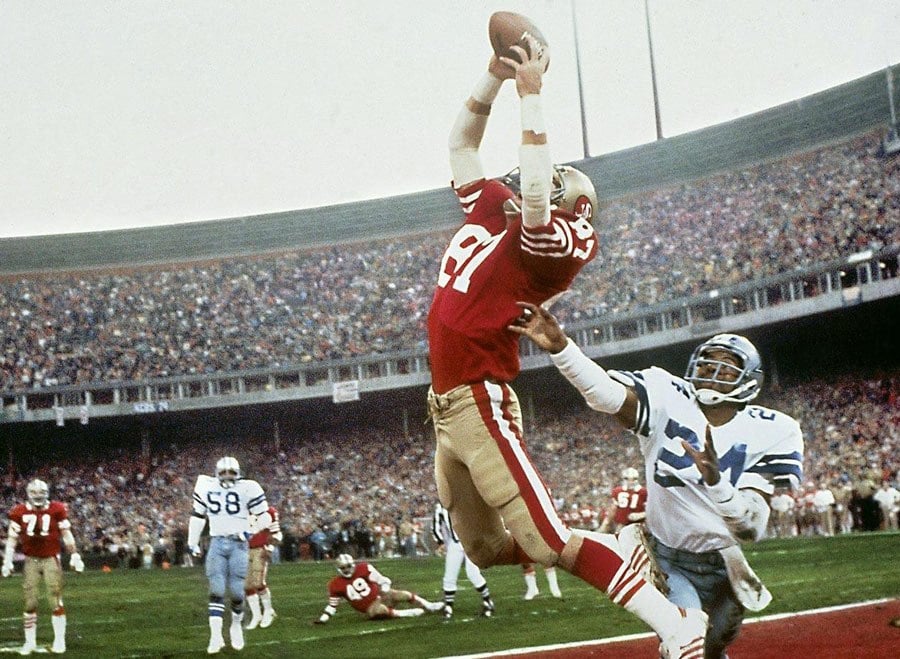 1982: Dwight Clark makes a last minute touchdown catch in the NFC Championship, winning the game and putting the San Francisco 49ers into their first Super Bowl. The play would come to simply be known as ‘The Catch.’

The entire collection can be found at Sports Illustrated.