Gun sales spike after mass shootings in America, despite statistics that indicate gun ownership heightens chances of getting shot. 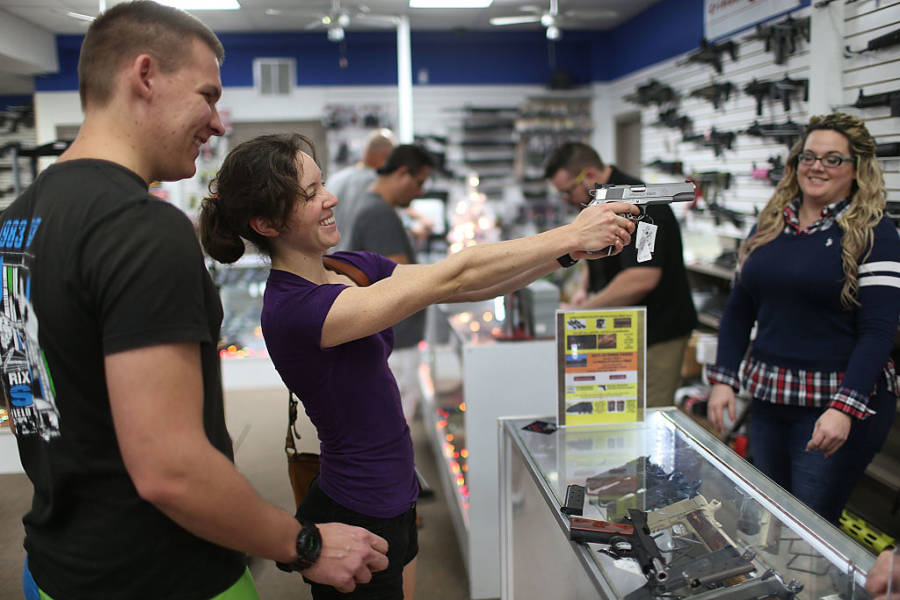 In the wake of mass shootings, it might seem logical that Americans would want to stay as far away from guns as possible.

In reality, though, they flock to purchase them — buying into the NRA’s rhetoric that “the only thing that stops a bad guy with a gun is a good guy with a gun.”

Studies have shown this trend of increased gun sales after Newton, after Orlando, and — according to new research out Monday — after San Bernardino.

The report indicates that proximity has something to do with it. The closer people are to the violence, the more drawn they are to the ammo.

After a shooting “the world seems to suddenly be a more violent and disturbing place than people thought,” David Studdert, the study’s author, told CNN.

San Bernardino residents were largely responsible for the 2015 increase — with an 85 percent gun ownership spike within that city alone.

This data is especially thorough since it’s from California, one of the only states where all legal handgun purchases are tracked — including those from gun shows.

Most of the new buyers were white or Hispanic and many of them were women who had never owned guns before.

“Households that never previously had handguns now do,” Studdert said.

Gun owners in the U.S. already own about a third of all the guns worldwide. This research suggests this uniquely American love of firearms is caused, at least in part, by a desire for safety.

But other studies have found that owning guns actually makes a person more likely to get shot.

“The most unfortunate aspect of this is that these guns are purchased for self-defense but are far more likely to be used against the purchaser or that person’s family or friends,” Josh Sugarmann, executive director of the Violence Policy Center, said.

After Orlando, for example, 92 percent of Americans expressed support for expanded background checks and 87 percent supported a gun ban for convicted felons and people with a mental illness.

But despite this nationwide bipartisan desire for stricter gun laws, the Trump administration signed a bill that would allow people with mental illness to purchase guns.

The order, signed in February, was a rollback of Obama’s post-Sandy Hook efforts to add 75,000 names to the gun background check database.

The NRA applauded Trump’s move, stating that it “marks a new era for law-abiding gun owners, as we now have a president who respects and supports our arms.”

Next, read about the biggest school massacre that America forgot. Then, check out these appalling statistics on mass shootings in America.