Were The Hanging Gardens Of Babylon Real Or Only A Myth?

One of the Seven Wonders of the Ancient World, the Hanging Gardens of Babylon has baffled historians for millennia. But recent research may finally offer some answers.

Imagine yourself traveling through a scorching-hot desert in the Middle East. Like a shimmering mirage rising from the sandy floor, you suddenly see lush vegetation cascading over columns and terraces as high as 75 feet.

Beautiful plants, herbs, and other greenery wind around stone monoliths. You can smell the aromas of exotic flowers hitting your nostrils as you approach the area downwind of the magnificent oasis.

You reach the Hanging Gardens of Babylon, said to be built in the 6th century B.C. by King Nebuchadnezzar II. 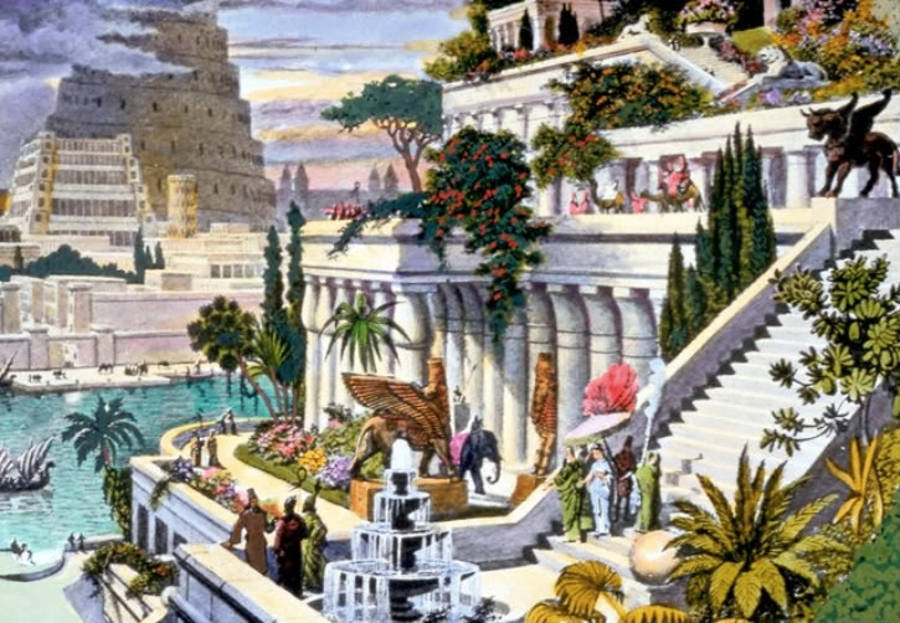 Wikimedia CommonsAn artist’s rendering of the Hanging Gardens of Babylon.

As the story goes, the king’s wife Amytis desperately missed her homeland of Media, which was located in the northwestern part of modern-day Iran. As a gift to his homesick love, the king apparently built an elaborate garden to give his wife a beautiful memory of home.

To do this, the king constructed a series of waterways to serve as an irrigation system. Water from a nearby river was raised high above the gardens to cascade downward in a stunning fashion.

The elaborate engineering behind this marvel is the main reason why historians consider the Hanging Gardens of Babylon to be one of the Seven Wonders of the Ancient World. But was this ancient wonder real? And was it even in Babylon?

The History Of The Hanging Gardens Of Babylon 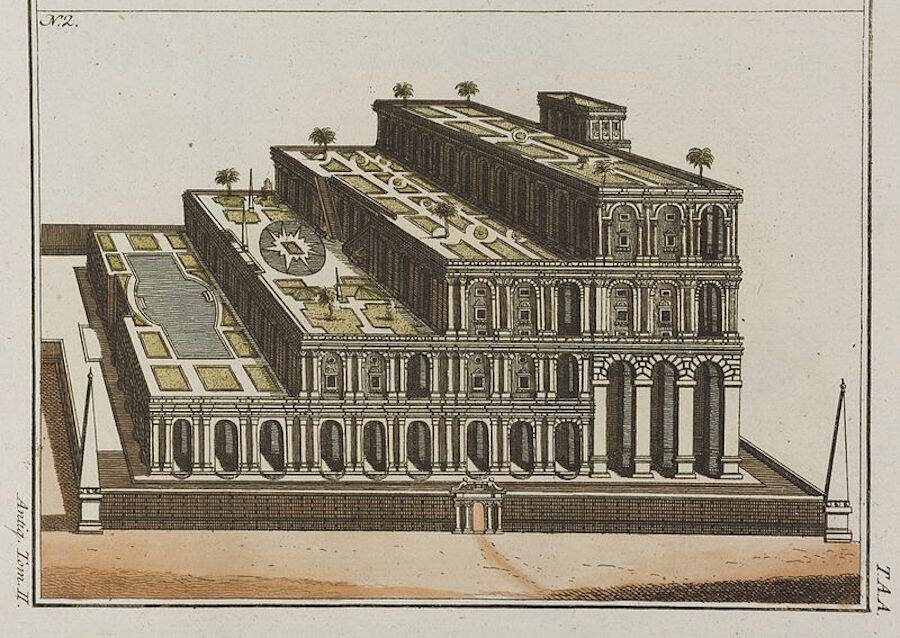 Wikimedia CommonsAn artist’s depiction of the plan for the Hanging Gardens of Babylon.

Many ancient Greek historians wrote down what they believed the gardens looked like before they were apparently destroyed. Berossus of Chaldea, a priest who lived in the late 4th century B.C., gave the oldest-known written account of the gardens.

Diodorus Siculus, a Greek historian from 1st century B.C., drew on the source material from Berossus and described the gardens as such:

“The approach was sloped like a hillside and the several parts of the structure rose from one another tier on tier. On all this, the earth had been piled … and was thickly planted with trees of every kind that, by their great size and other charm, gave pleasure to the beholder.”

“The water machines [raised] the water in great abundance from the river, although no one outside could see it.”

These vivid descriptions relied solely on secondhand information passed down for generations after the gardens were demolished.

Although Alexander the Great’s army went to Babylon and reported seeing magnificent gardens, his soldiers were prone to exaggeration. As of now, there’s no known way to confirm their reports.

The impressive technology behind the irrigation system is also quite puzzling. How would the king be able to plan such a complex system in the first place, let alone carry it out?

Were The Hanging Gardens Of Babylon Real? 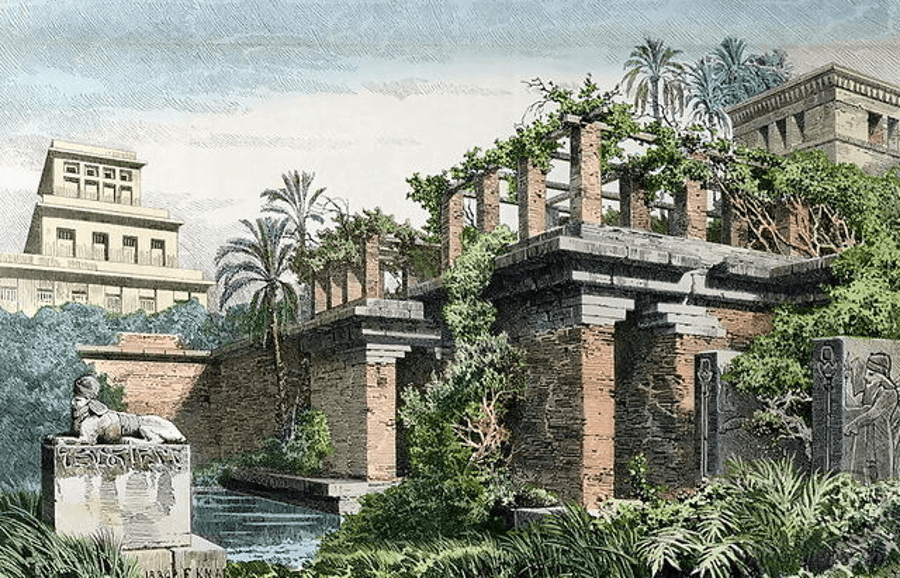 Unanswered questions certainly didn’t stop people from searching for the remains of the gardens. For centuries, archeologists combed the area where ancient Babylon used to be for relics and remains.

In fact, one group of German archeologists spent a whopping 20 years there at the turn of the 20th century, hoping to finally unearth the long-lost wonder. But they were out of luck — they didn’t find a single clue.

A lack of physical evidence, coupled with no existing firsthand accounts, led many scholars to wonder whether the fabled Hanging Gardens of Babylon ever even existed. Some experts began to suspect the story was a “historical mirage.” But what if everyone was just searching for the gardens in the wrong place?

Research published in 2013 revealed a possible answer. Dr. Stephanie Dalley of Oxford University announced her theory that ancient historians simply got their locations and kings mixed up.

Where Were The Fabled Hanging Gardens Located? 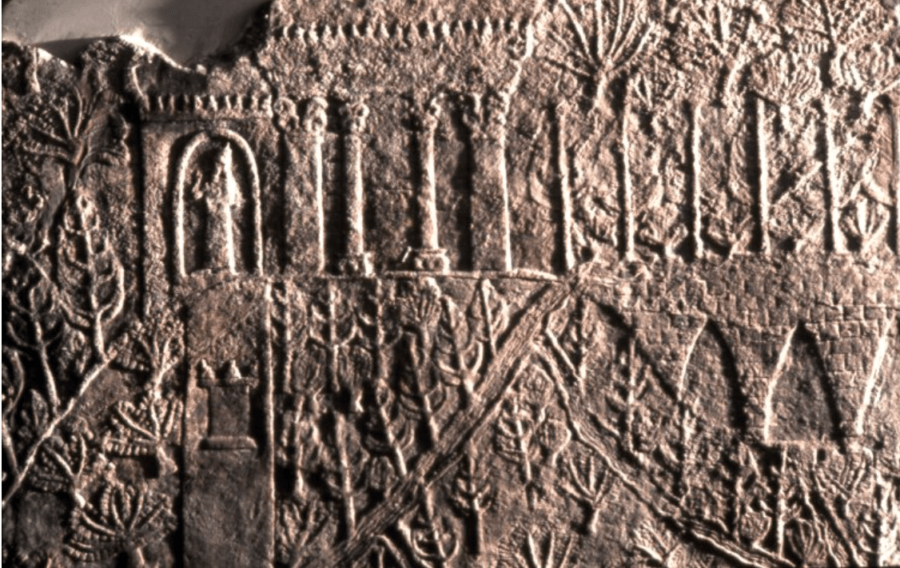 Wikimedia CommonsThe Hanging Gardens of Nineveh, as shown on an ancient clay tablet. Notice the aqueduct on the right side and the columns in the upper-middle portion.

Dalley, one of the world’s foremost experts on Mesopotamian civilizations, uncovered updated translations of several ancient texts. Based on her research, she believes that King Sennacherib, not Nebuchadnezzar II, was the one who built the hanging gardens.

She also thinks the gardens were located in the ancient city of Nineveh, near the modern-day city of Mosul, Iraq. On top of that, she also believes the gardens were constructed in the 7th century B.C., nearly a hundred years earlier than scholars had originally thought.

If Dalley’s theory is correct, that means the hanging gardens were constructed in Assyria, which is about 300 miles north of where ancient Babylon used to be. 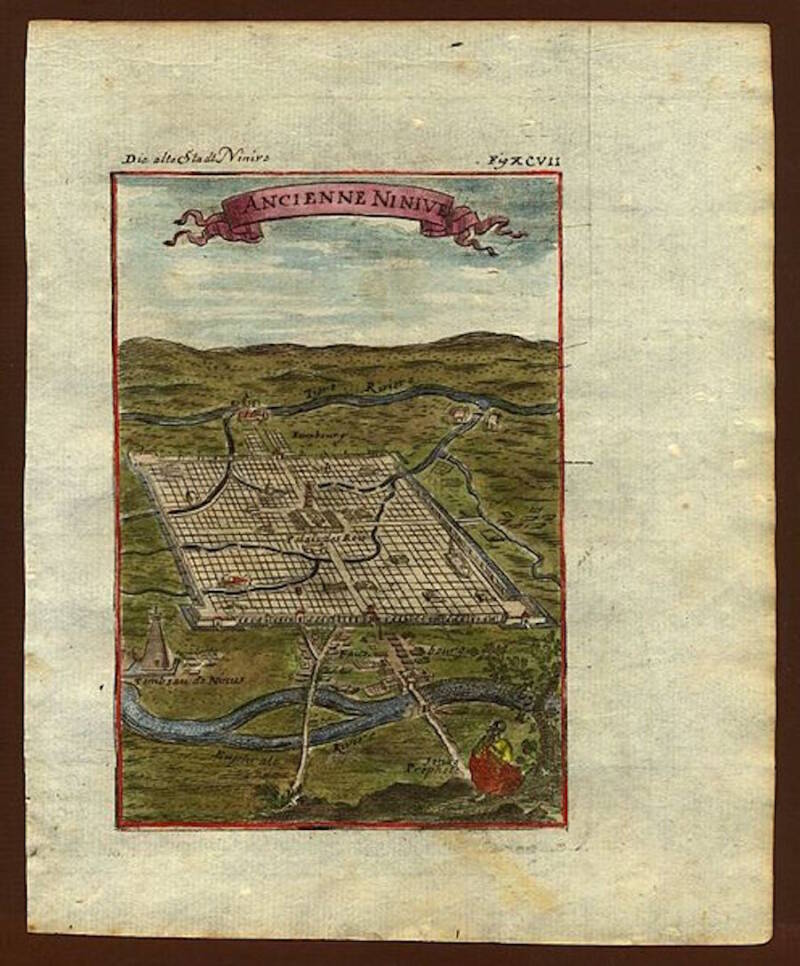 Interestingly enough, excavations near Mosul do appear to back up Dalley’s claims. Archaeologists uncovered evidence of a huge bronze screw that could have helped moved water from the Euphrates River into the gardens. They also discovered an inscription that said the screw helped deliver water to the city.

Bas-relief carvings near the site depict lush gardens supplied by an aqueduct. The hilly terrain surrounding Mosul was much more likely to receive water from an aqueduct versus the flatlands of Babylon.

Dalley further explained that the Assyrians conquered Babylon in 689 B.C. After that happened, Nineveh was often referred to as “New Babylon.”

Ironically enough, King Sennacherib himself may have added to the confusion since he actually renamed his city gates after the ones at Babylon’s entrances. Therefore, ancient Greek historians may have had their locations wrong all along.

Centuries later, most “garden” excavations focused on the ancient city of Babylon and not Nineveh. Those miscalculations may have been what led archaeologists to doubt the existence of the ancient wonder of the world in the first place.

As scientists dig deeper into Nineveh, they may find more evidence of these vast gardens in the future. As it turns out, an excavation site near Mosul sits on a terraced hill, just as Greek historians once described in their accounts.

As to what the hanging gardens really looked like, no firsthand accounts currently exist. And all the secondhand accounts only describe what the gardens used to look like before they were ultimately destroyed.

So until archaeologists find an ancient text describing the gardens accurately, consider visiting your local botanical garden or greenhouse to walk among lush landscapes and carefully pruned shrubs.

Then close your eyes and imagine traveling 2,500 years into the past to the time of ancient kings and conquerors.

Enjoyed this look at the Hanging Gardens Of Babylon? Next, read about what happened to the Colossus Of Rhodes. Then learn about some other wonders of the ancient world.