Inside The Statue Of Zeus At Olympia, One Of The Breathtaking Seven Wonders Of The Ancient World

Though the 40-foot statue of Zeus lorded over the Olympic Games for 800 years, it somehow vanished from history.

As one of the seven wonders of the ancient world, the statue of Zeus at Olympia once stunned any who laid eyes on it. The 40-foot statue of the Greek god of gods, Zeus, used to grace the temple inside the sanctuary of Olympia on the Greek Peloponnese Peninsula for over 800 years — until it was destroyed.

Indeed, the statue — once made from ebony and precious stones in addition to gold and ivory — no longer exists today. Historians are not completely sure about what happened to it, but there are a number of theories.

Astonishing Details On The Statue Of Zeus At Olympia 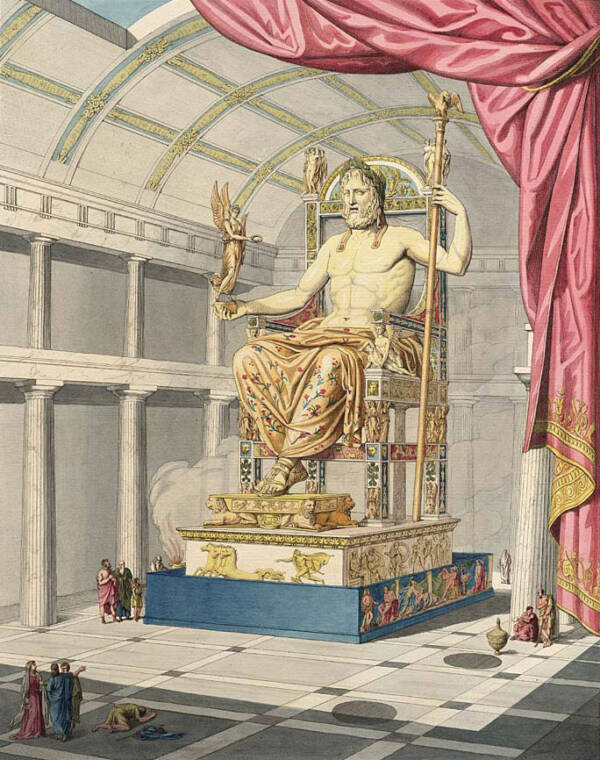 Wikimedia CommonsDepiction of the statue of Zeus at the temple in Olympia.

When the new temple of Zeus was completed around 463 B.C.E., it was considered a beaming example of Doric architecture. Doric buildings had no base but featured fluted columns, tapered shafts, and a simple capital, or topmost part of the column.

Inside, everything was streamlined and simple as to not detract from the larger-than-life statue within.

The magnificent statue of Zeus, the Greek god of all gods, was created by master sculptor Pheidias or Phidias, who was also the creator of the legendary statue of Athena Parthenos inside the Parthenon. Phidias had been recruited by leaders in the city-state of Elis, who paid him in the spoils from the recently-won Triphylian War.

The statue of Zeus at Olympia was a chryselephantine sculpture, meaning it was made of ivory plates and gold panels laid over a wooden framework. This style enjoyed a high status in ancient Greece. Zeus, carved with a magnificent beard, was depicted seated upon his royal throne. His robe consisted of plates of gold, intricately decorated with flora and fauna.

In his right hand, he held a figure of Nike — the winged goddess of victory. In his left, an eagle sitting upon a scepter. The throne rested on a three-foot-high, black Eleusinian marble pedestal, and the sculpture oversaw the first and earliest Olympic Games. 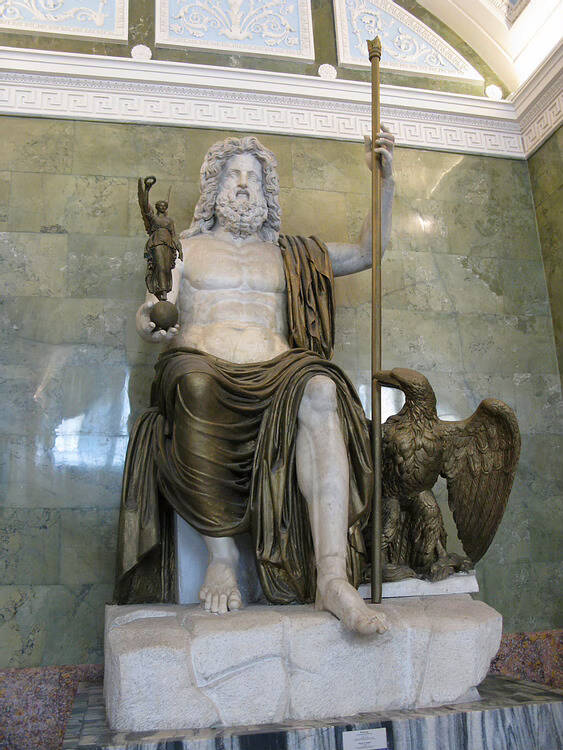 Flickr/thisisbossiReplica of the Zeus at the Hermitage Museum, St. Petersburg.

Nearby, a shallow reflecting pool was constructed to hold more oil that kept the atmosphere moist. The reflection of the statue in the oil probably made it seem even bigger, and even more other-worldly.

Kenneth Lapatin, the Curator of Antiquities with the J. Paul Getty Museum, described the probable scene at the temple:

“Glimmering in the half-light of the temple, reflected in the shallow, mirror-like pool set into the floor, the statue’s gilded glass drapery, with figures shimmering as through silk, would have surely contributed to the awesome effect of Phidias’ Zeus and perhaps facilitated that statue’s eclipse of the chryselephantine Athena.”

The Destruction Of The Temple And Statue

Though Phidias fell out of political favor and was imprisoned until his death in 430 B.C.E., the statue enjoyed a longer life. For 800 years, it was routinely bathed in olive oil to prevent the ivory from cracking.

But then in 379 C.E., the Roman Emperor Theodosius I came to power. He favored Christianity and consequently decreed that all cult practices be stopped. This included the Olympic Games and the honoring the Greek gods like Zeus. Olympia held the final ancient Olympics in 393 C.E..

Around this time in 395 C.E., the statue of Zeus was allegedly moved to Constantinople, where an earthquake or tsunami destroyed it sometime in the 6th century C.E.. However, another theory set forth by historians posits that a fire destroyed the statue in 475 C.E. 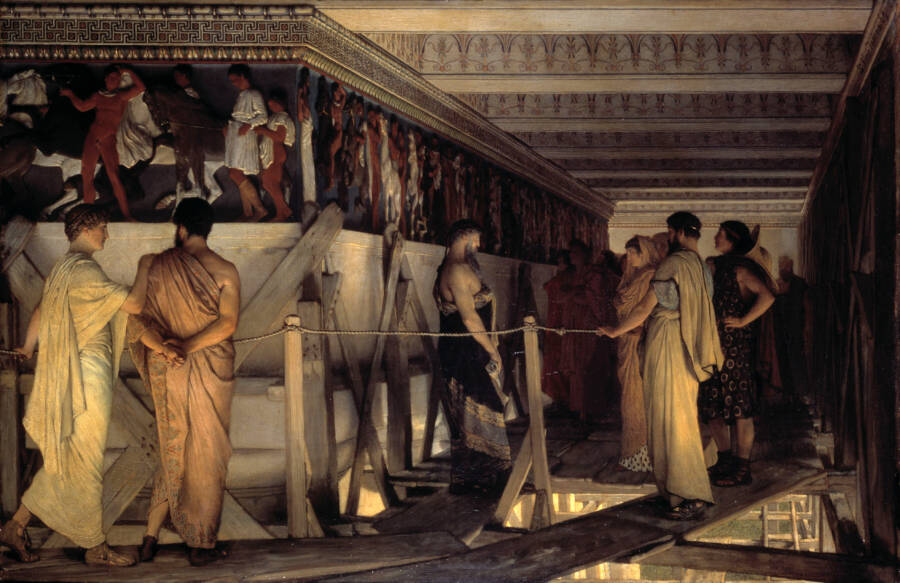 Wikimedia CommonsPainting of Phidias showing off his frieze inside the Parthenon by Sir Lawrence Alma-Tadema, 1868.

The temple, too, fell into disrepair. When Theodosius II took over, he enacted another decree against pagan temples. The spectacular house of Zeus was desecrated. Then, earthquakes shook the abandoned site in 522 and 551 C.E., completely destroying the temple.

People felt the loss of this great work immensely. Of all the Seven Wonders of the ancient world, the statue of Zeus at Olympia was most revered. The only proof from its time that it ever existed is in descriptions and coin illustrations.

What Happened To Phidias?

Phidias’ greatest artistic masterpiece likely was the statue of Zeus. He inspired many, as his talent was unparalleled at the time. Some even believed the sculptor was witness to the majesty of the gods who revealed themselves to man through his artwork.

Unfortunately for Phidias, however, the company he kept likely caused his downfall. As a member of the politician and General Pericles’ inner circle, Phidas had enemies who first accused him of stealing both gold and ivory when he made the Athena Parthenos. 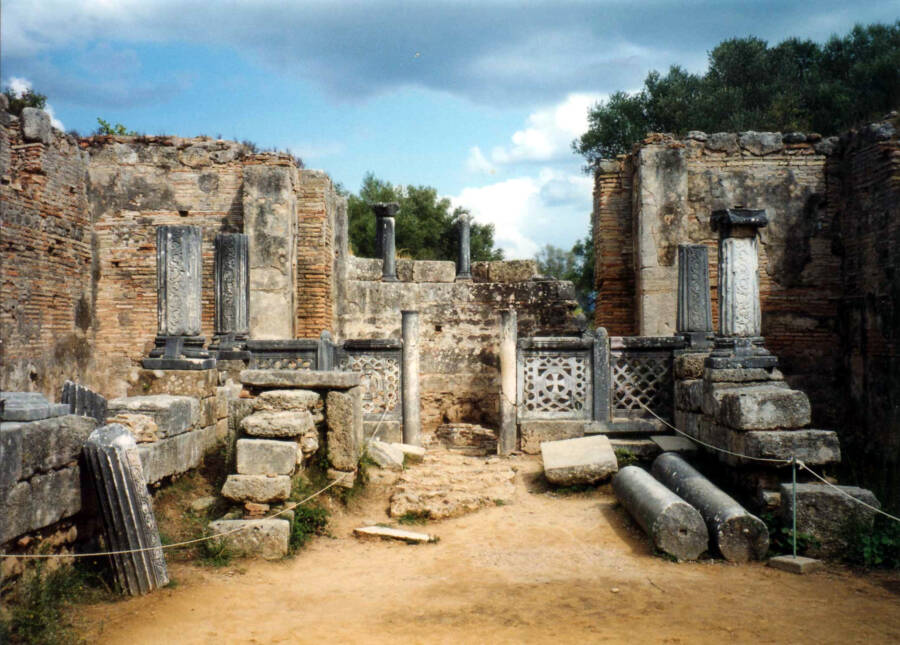 Wikimedia CommonsThe unearthed workshop of Phidias at Olympia, where it is said he fashioned the chryselephantine statue of Zeus. A cup found here bore the name of the sculptor.

Phidias was subsequently carted off to prison, where historian and biographer Plutarch insists he died of an illness while awaiting trial. However, the completion date of the Zeus statue, and the archaeological discovery of his workshop in Olympia in 1954 suggests that he didn’t die in prison. Instead, he was likely killed by the people of Elis for his religious beliefs.

Though Phidias and his divine sculpture are long gone, his masterpiece has not been forgotten for its splendor.

Next, read about the newly excavated Roman gladiator arena in Turkey. Then, check out this 12,500-year-old ‘Sistine Chapel of the Ancients’ in the Amazon Jungle.