Also known as the "Mountain of Seven Colors," Vinicunca is a 17,000-foot tall mountain that attracts thousands of visitors a day — and it's easy to see why.

In 2013, the world was introduced to a newly-uncovered geological wonder in Peru known as the Rainbow Mountain.

The mountain is aptly named. Deep in the heart of the Peruvian Andes, the vibrant ridge arises out of the Earth, lined with layers of red, orange, yellow, and turquoise.

The majority of tourists used to flock to the Andean country in order to visit the ruins of the Inca citadel Machu Picchu, but ever since the discovery of Rainbow Mountain, over 1,000 curious visitors visit the ridge each day. 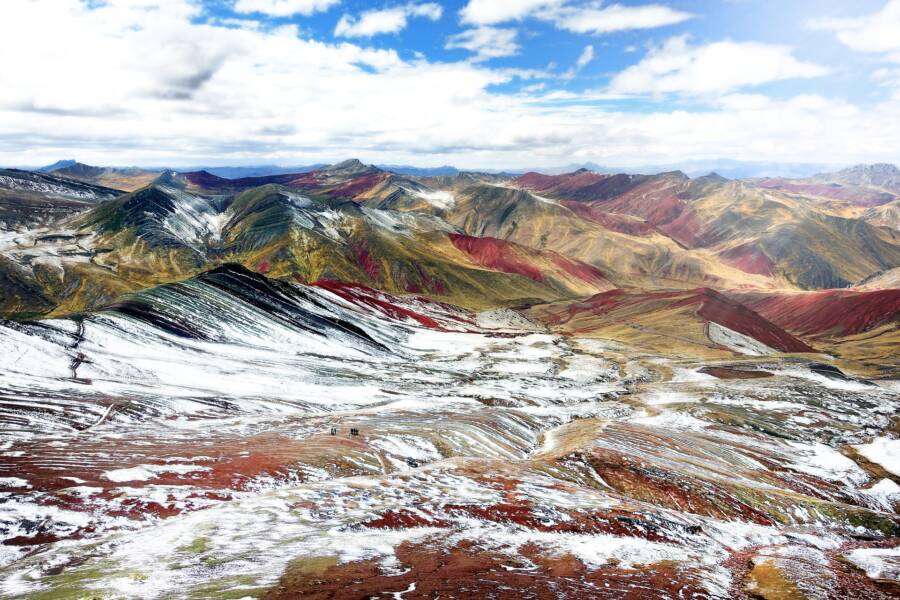 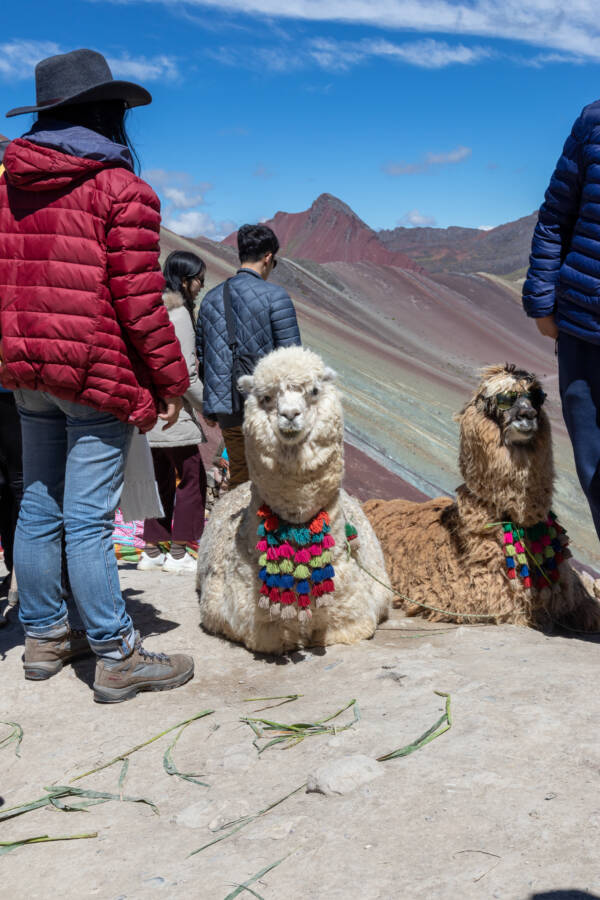 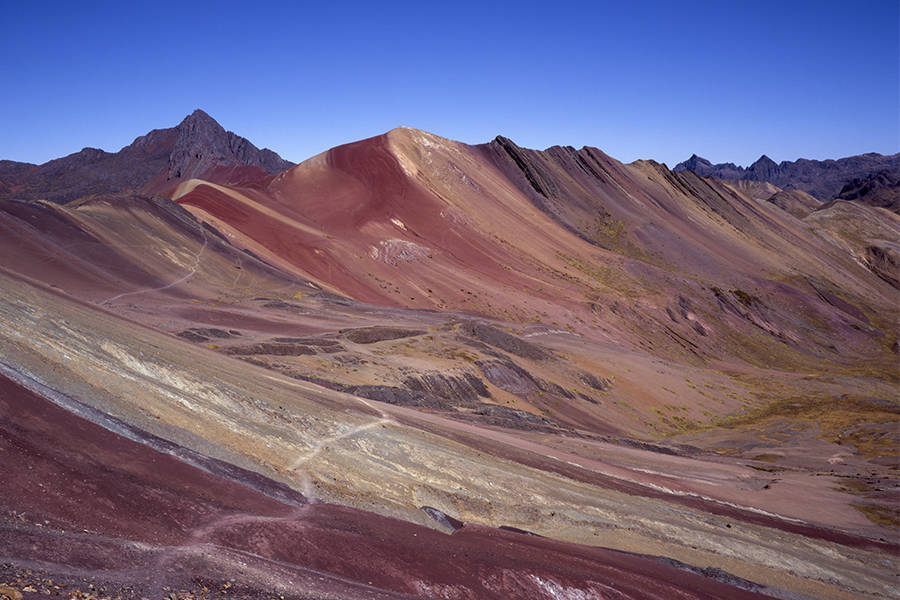 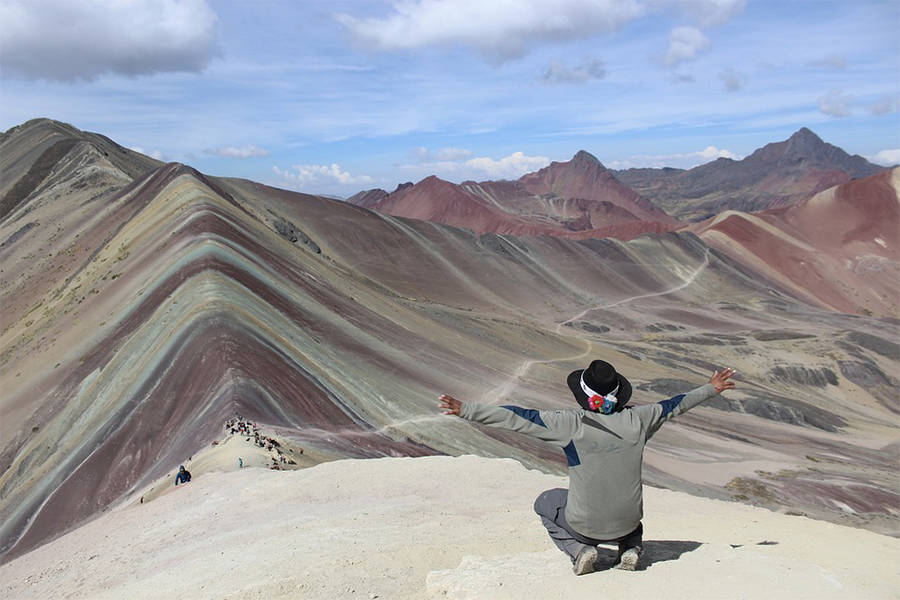 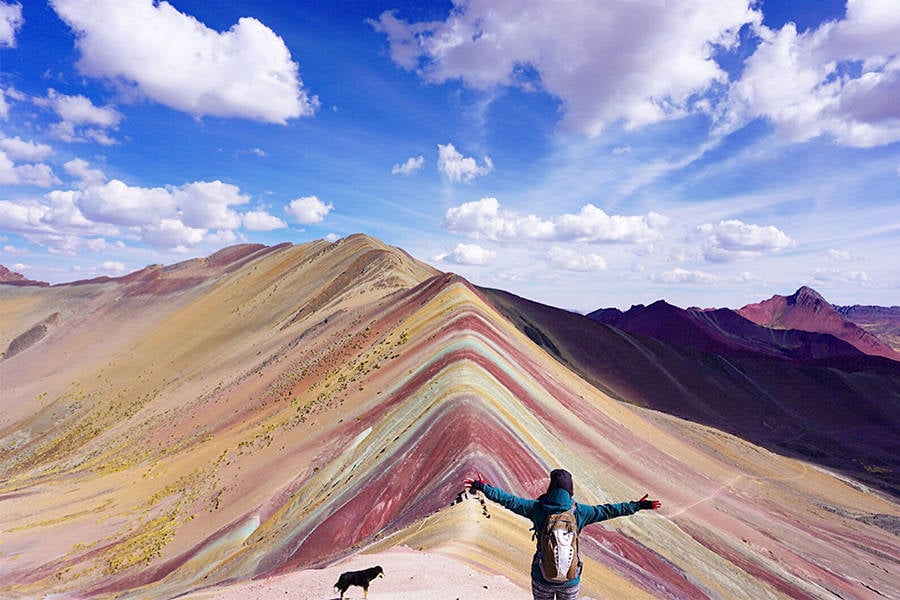 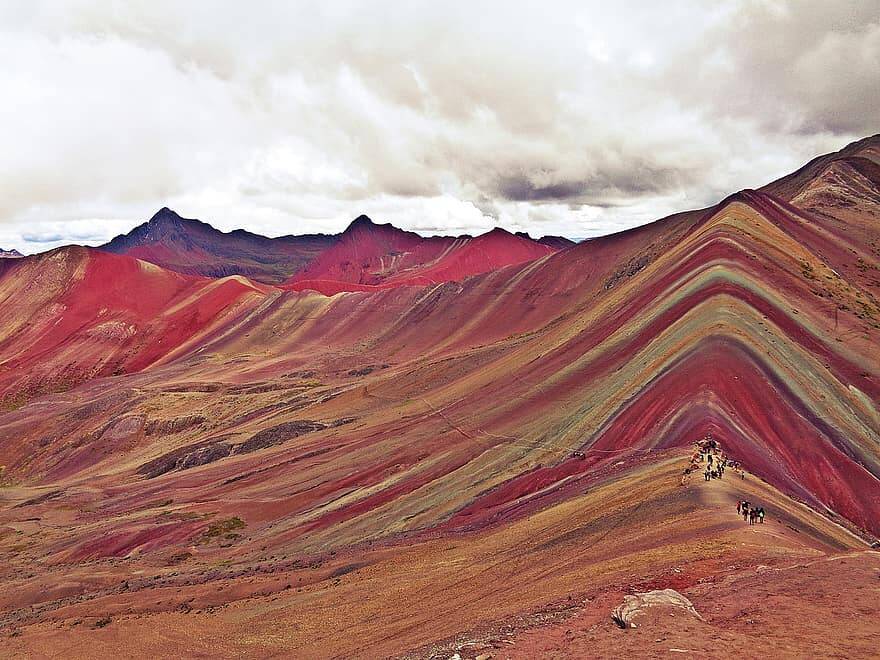 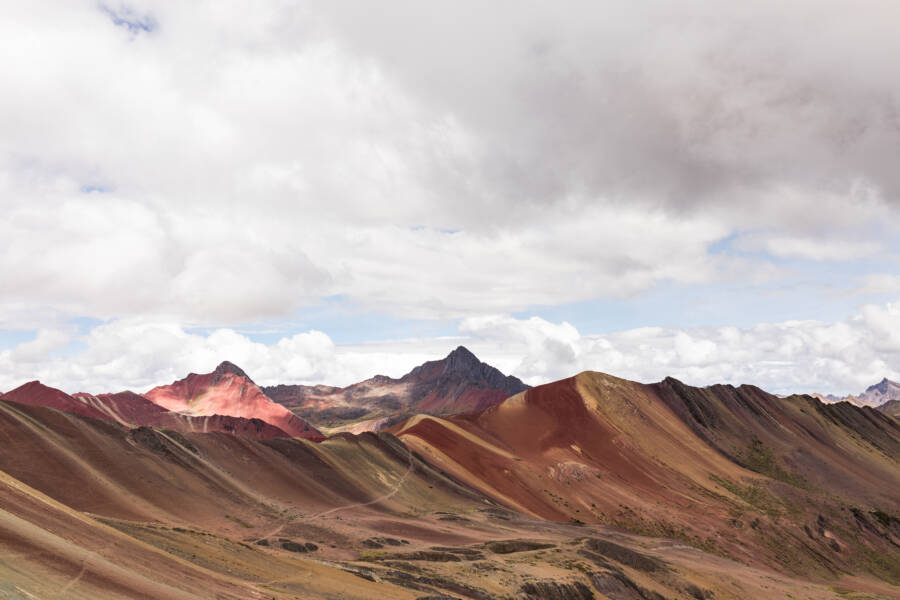 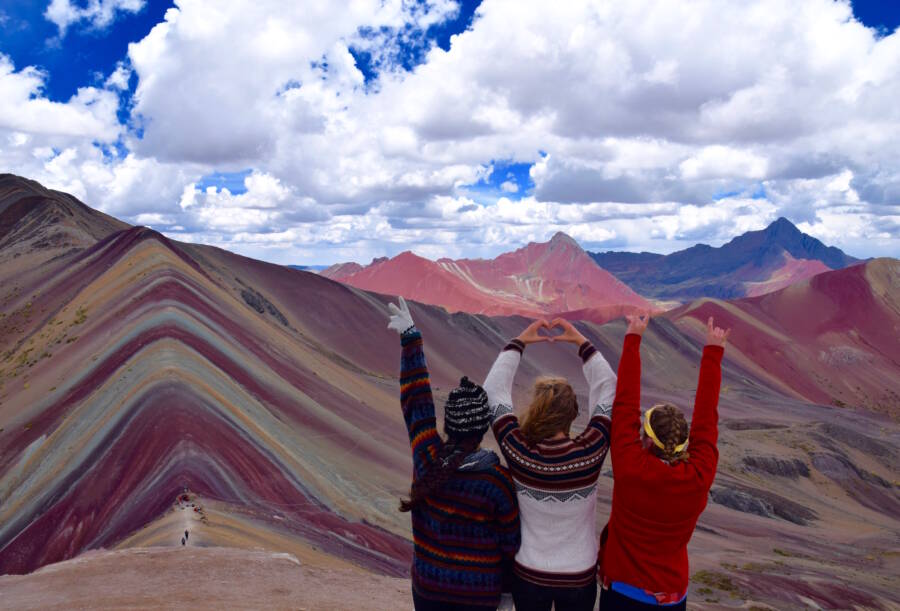 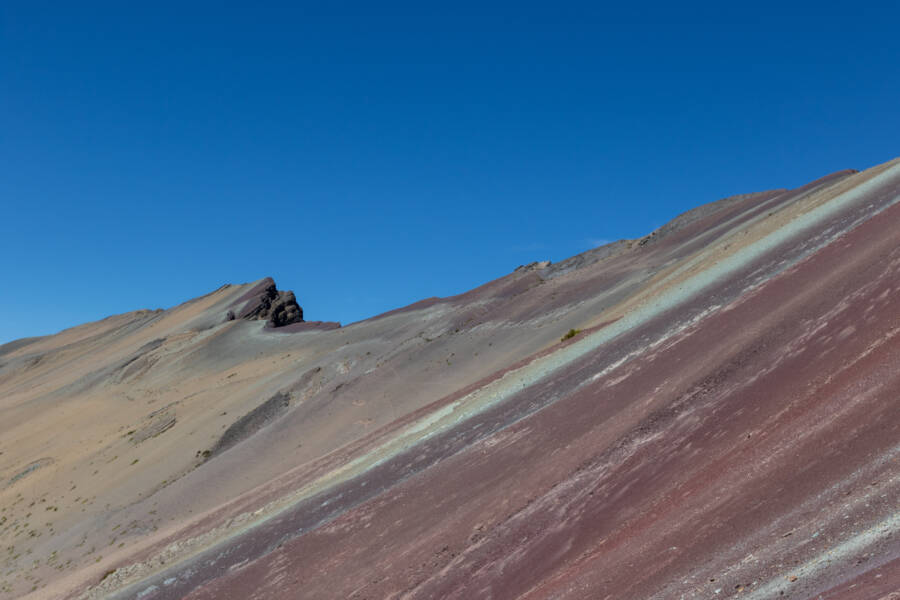 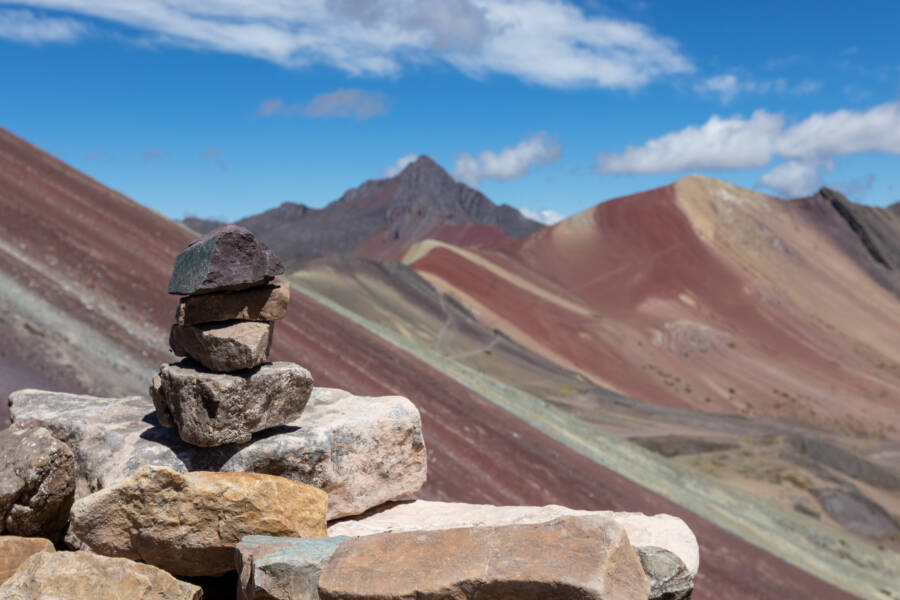 1 of 11
The stunning Rainbow Mountain in Peru peaks at 17,060 feet.Pixabay
2 of 11
Alpacas by the mountain.beggs/Flickr
3 of 11
The ridge containing Rainbow Mountain also appears striped with minerals. Flickr
4 of 11
A hiker poses with the mountain, slightly more subdued in color in certain lights. Pixabay
5 of 11
A hiker poses with their dog in front of Rainbow Mountain, also known as Vinicunca. Barcroft Media/Getty Images
6 of 11
pikist
7 of 11
Glendora de Valo/Wikimedia Commons
8 of 11
The mountain sees around 4,000 a day.international-programs/Flickr
9 of 11
beggs/Flickr
10 of 11
The mountain is the result of ancient volcanic activity that formed the Andes as a whole.beggs/Flickr
11 of 11 Also known as Vinicunca, the Rainbow Mountain peaks at 17,060 feet above sea level and is approximately 62 miles southeast of the Peruvian city of Cusco. Locals regard Rainbow Mountain as a holy place, and it's considered the symbol of the father and masculinity. The mountain is said to fertilize Pachamama or Mother Earth herself. Local tradition considers this mountain to be the spiritual protector of the native people.

Despite its ancient history, the mountain was hidden from sight because the area used to be covered entirely in snow. Only recently, with the effects of climate change, was the rainbow revealed.

Besides the breathtaking Rainbow Mountain, the whole region is rich in geology, from granitic cliffs to large valleys eroded by glaciers.

A virtual tour to the peak of Rainbow Mountain.

What sets Rainbow Mountain apart from other mountains around it is, of course, its vibrant array of colors. The mountain is made up of 14 different minerals, and each mineral is represented by a different color.

Rainbow Mountain is one of several peaks that make up a now-dormant chain of volcanoes that formed when the Nazca tectonic plate fell beneath the South American plate. The volcanic activity dredged up minerals that were deep in the Earth, which were then laid and compacted into different layers of sedimentary rocks, like sandstone, halite, gravel, clay, and other minerals.

Then as these minerals were exposed to the environmental conditions around them, like snow, wind, and water, their colors changed. Each of the hues on the mountain comes from a different mineral. The red layers indicate iron oxide rust, while the orange and yellow suggest iron sulfide. The turquoise comes from chlorite, which, interacts with the yellow to form a brilliant turquoise blue.

In turn, this breathtaking attraction is sometimes called Vinicunca or "Montaña de Siete Colores," which translates to "the mountain of seven colors."

While the other mountains in the range likely have similar colorations beneath their rocky exteriors, Rainbow Mountain is different because its exterior has been wiped away by erosion.

"We have asked the elders that live in Pitumarca [a nearby town] and they said that the mountain was under the snow," said mountain tour guide Santos Machacca. "Global warming has caused the ice to melt, and a colorful mountain appeared from under it."

Hiking Rainbow Mountain Is Not For The Faint Of Heart

Just getting to the Vinicunca mountain from the nearby town of Cusco, where most tourists lodge, can be difficult without some assistance. It used to require several days of hiking to reach the peak as it lies deep within the Andes. Recently, however, the city of Cusco has funded a line of busses that can take visitors closer to the geological marvel.

Both the high altitude and the trail's length make for a challenging trek. It's suggested that tourists let their bodies acclimate to the thin air at such a high altitude for a couple of days before hitting the trails. Altitude sickness can be debilitating, though some people insist that chewing on coca leaves or drinking coca tea helps.

Meanwhile, being a guide to Rainbow Mountain has proven to be a lucrative industry, in part because trekking Rainbow Mountain is a near impossibility without an experienced guide. The terrain leading up to the mountain is difficult to navigate — and without a guide, a wrong step is easy to make.

It doesn't help that the weather in the region is very unpredictable. Experts advise tourists to bring several light layers for temperature swings and protection from rain, sun, and the cooler temps at the top of the mountain.

It's probably worth noting that sometimes the views of Rainbow Mountain can be completely obscured by clouds. However, if you can catch it in the right conditions, it is as breathtakingly beautiful as it appears in the photos.

How Tourism Has Changed The Mountain

An experienced hiker treks to the top of Rainbow Mountain.

Though the influx of visitors has breathed new life into the local mountain community in the Andes, the booming industry has also come at a price. In the few short years since tourists started climbing the mountain, hikers have eroded the 2.5 mile-long trail to get there.

"From the ecological point of view, they are killing the goose that lays the golden eggs," Peruvian biologist Dina Farfan said.

The delicate brush and fauna found trailside has been crushed underfoot. But experts are laying special trails that will hopefully help keep the landscape as natural and untouched as possible.

Guides are also hoping to receive help. Though they relish the industry that Rainbow Mountain has provided, these guides are unequipped to handle the sheer amount of tourists. At the time of this writing, there are going to be an estimated 1,500 per day in the coming year.

These Spanish-speaking guides also don't always understand the tourists' language, and most tourists don't speak Spanish. In addition, most guides aren't formally trained in first aid and other basic survival skills. Since tourism has increased, Peru added 500 locals to work as guides.

Guides rent out horses and mountain bikes for tourists to ride up to Vinicunca and lead group tours while furnishing bits of local culture. Though they only charge $3 per person, they bring in about $400,000 per year combined.

Machacca explained that besides its breathtaking views, people are drawn to Rainbow Mountain because "they can feel the pure air and you forget everything." He added that people go to Rainbow Mountain to breathe, to heal, and to connect with the legend of the mountain spirit watching over the Peruvian Andes.

After learning about the Rainbow Mountain of Peru, check out the world's other rainbow mountians, like these in China. Then, take a look at the seven tallest mountains in the world.