Whether it was the cave where Vikings tried to ward off the apocalypse or the nude English giant that's baffled experts for centuries, these are the most astounding pieces of history news from 2021.

Though history may seem static, the truth is that our knowledge of the past is constantly evolving. Whenever new artifacts are unearthed or state-of-the-art analyses are performed, our view of history becomes clearer. And 2021 was filled with history news stories that left even the experts astounded.

From a Crusader’s sword pulled out of the Mediterranean to the evidence that places the Vikings in the Americas 500 years before Columbus, these are the most interesting history stories of 2021. 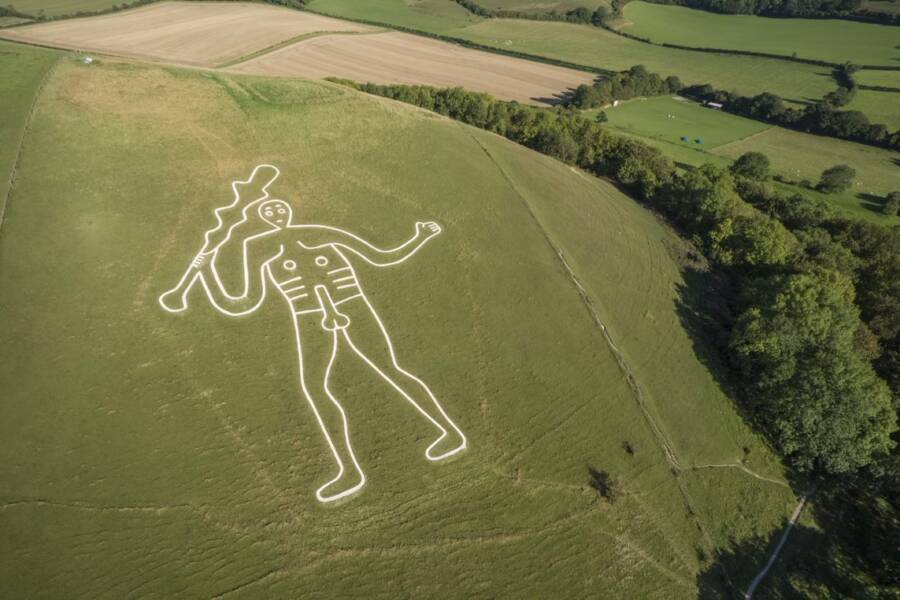 Researchers long believed that the waggish Cerne Abbas Giant in Dorset, England dated back some 300 years. But a 2021 study published in May made history news by suggesting that the giant is actually hundreds of years older than previously thought.

“Everyone was wrong and that makes these results even more exciting,” gushed Mike Allen, a geoarchaeologist at Allen Environmental Archaeology in Codford, U.K., who led the year-long study on the hillside carving.

Allen and his team studied the soil around the giant’s infamous outline. Using a technique called “optically stimulated luminescence,” they were able to determine the last time the soil had seen sunlight.

Since the earliest mention of the giant comes from 1694, some historians suspected that it was meant to mock the brutal rule of Oliver Cromwell. The new dating, however, suggests that the giant might have mocked organized religion, instead.

Researchers point out that a monastery moved into the region around the same time that locals drew the giant.

“It would almost seem to be an act of resistance by local people to create this fantastically rude pagan image on the hillside,” noted Allison Sheridan, a freelance archeological consultant in Edinburgh. “It’s like a big two fingers to the abbey.”

Viking Cave Used To Ward Off The Apocalypse Uncovered In Iceland 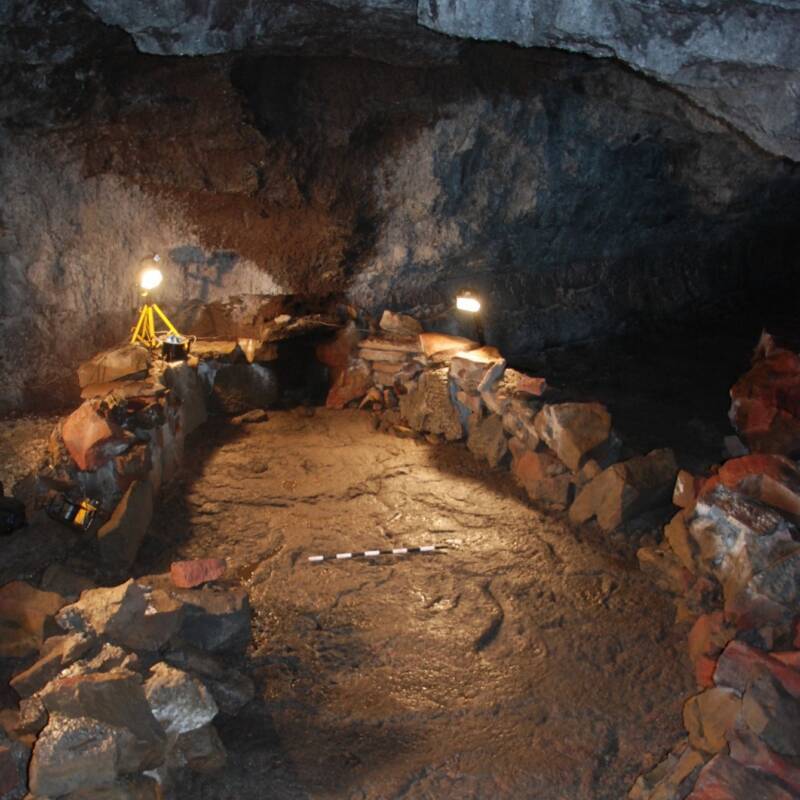 Brown UniversityThis boat-like structure may have been used in rituals designed to prevent Ragnarök.

Vikings believed in Ragnarök, a sort of fiery apocalypse that would consume the gods. And in April 2021, archeologists in Iceland discovered a number of artifacts that Vikings may have gathered to ward off this doomsday event.

At Surtshellir Cave, researchers found a boat-shaped structure made from rocks, burned animal bones, and most beguiling of all, beads that originated in the Middle East.

These items, archaeologists suspect, were some kind of offering. The volcano near the cave erupted shortly after the Vikings arrived in Iceland, which may have made them anxious that the end was nigh.

“The impacts of this eruption must have been unsettling, posing existential challenges for Iceland’s newly arrived settlers,” explained researchers in the Journal of Archaeological Science.

Once the eruption ended, and the lava cooled, archeologists believe that Vikings entered Surtshellir Cave, created the boat structure, and burned animal bones.

They may have added the beads either to appease the Viking god Surtr, who Viking mythology says destroys the world, or to fortify the god Freyr, who legend says attempts to stop him.

Either way, this fascinating history news offered a tantalizing peek at life among the ancient Vikings, and insight into how they put their belief system into practice. 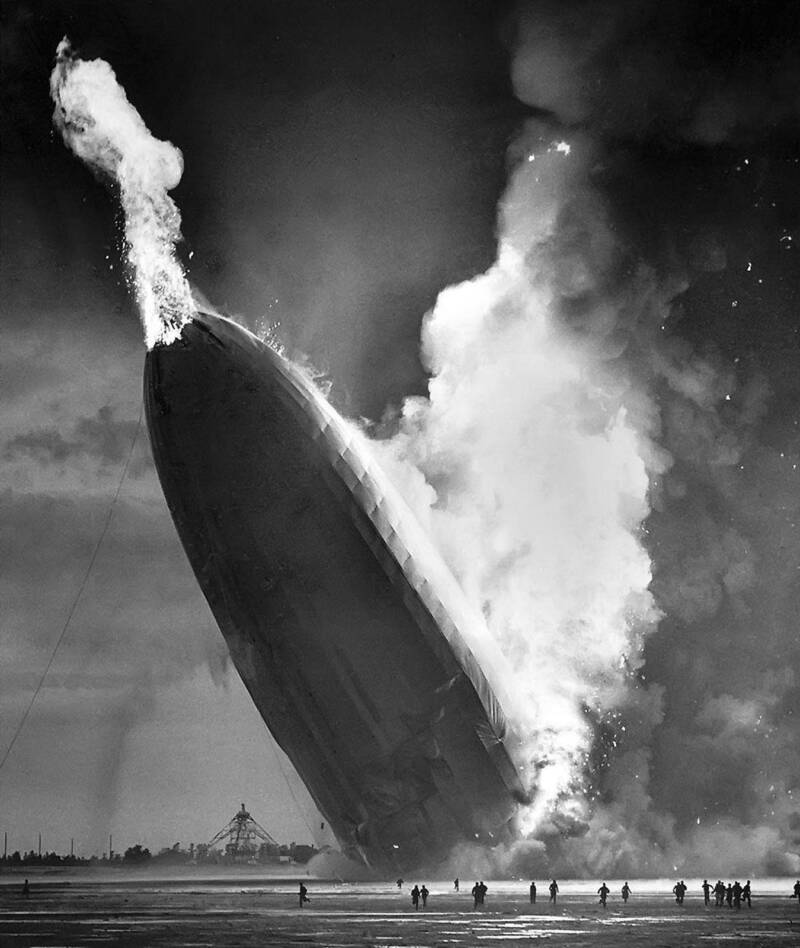 As the Hindenburg floated toward its mooring mast on May 6, 1937, most cameramen waited for it to come to a stop before starting their cameras. But a man named Harold Schenck filmed the zeppelin as it approached — and captured something no one else did.

In footage that remained unseen until May 2021, Schenck caught the fateful moment when the Hindenburg lowered its landing ropes. This was likely what triggered a devastating spark.

Schneck, who stopped filming after the Hindenburg arrived, and started again once it caught fire, also caught a wider angle of the disaster. Since he stood further away than the press, he captured the nose and the tail of the doomed zeppelin.

For years, his footage went unseen. But his nephew, Bob Schenk, offered it to aviation historian Dan Grossman at the 75th anniversary of the Hindenburg disaster. Grossman could hardly believe his eyes.

“My reaction was just — wow,” Grossman said. “I can’t believe we have this angle.”

Grossman and U.S. Air Force veteran Jason O. Harris later used Howard Schenk’s footage in a May 2021 PBS documentary on the Hindenburg disaster. The new footage, Grossman said, offered “a sense of what it would have been like to see it with your own eyes.”