Welcome To Dallol, Ethiopia: The Hottest Place On Earth

Welcome to Dallol, Ethiopia, where volcanoes, geysers and fractured earth form the landscape of the hottest place in the world.

No matter how low you have your thermostat set this summer, chances are your neighborhood’s heat conditions pale in comparison to everyday temperatures in Dallol, Ethiopia. With average temperatures consistently hovering at 94 ˚F, Dallol, Ethiopia might just be the hottest inhabited place on the planet. 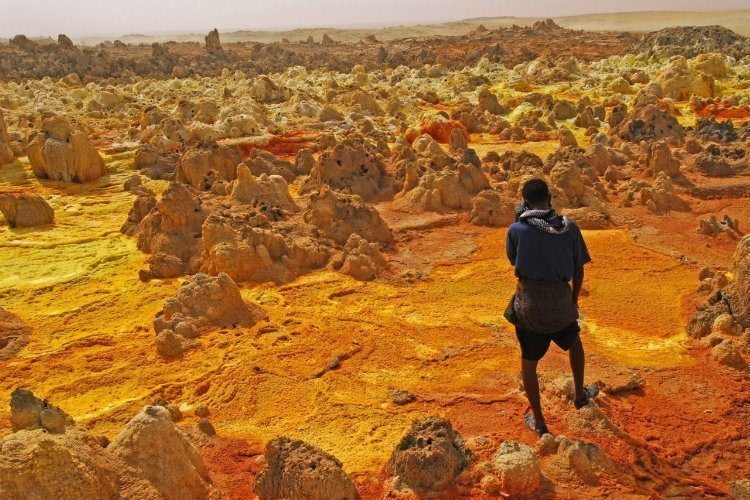 The annual average high temperature is 105 ˚F, but in June the temperatures can skyrocket to a fiery 116 ˚F. Heat and drought pummel Dallol, making visitors feel like they’re on another planet. 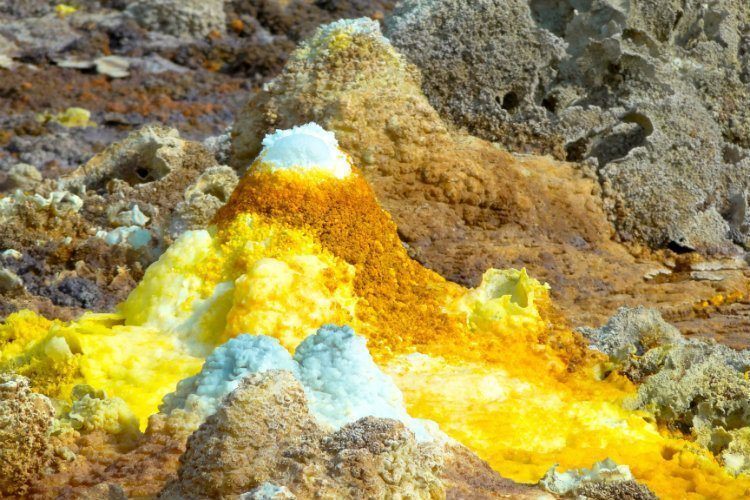 Unique geological conditions contribute to Dallol’s seemingly Martian landscape. The region is home to both the Dallol hydrothermal field and a volcano, which–given reports of an incandescent ash cloud covering the area earlier this year — may have erupted as recently as January 2015. 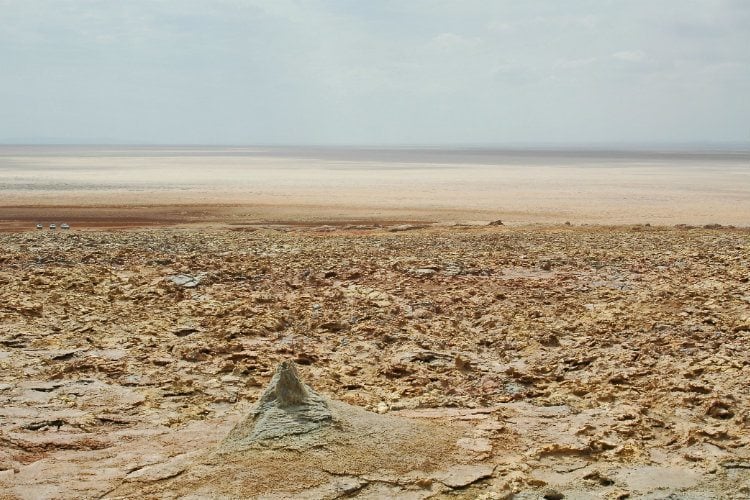 The volcano is one of the lowest volcanic vents in the world, but it is Dallol’s hot springs that make the region so visually striking. The earth releases chemical compounds like ferrous chloride and iron hydroxide within the springs, which harden some upon release and paint the subsequent salt deposits and lakes a greenish white.

After some time, inactive springs oxidize and become brown just like metal rusts in the rain. The process repeats for years, drenching an otherwise lifeless area in incredibly vibrant tones.

Sulphur and solidified black lava engulf some springs; vibrant cyan pools hide poisonous waters. Openings in the Earth’s crust, called fumaroles, spew steam and gas into the burning hot air, raising the surrounding temperature even more. This alien terrain is literally coming apart at the seams and in a hundred million years, scientists predict that the Earth will rip open and the nearby Red Sea will swallow the painted desert whole. 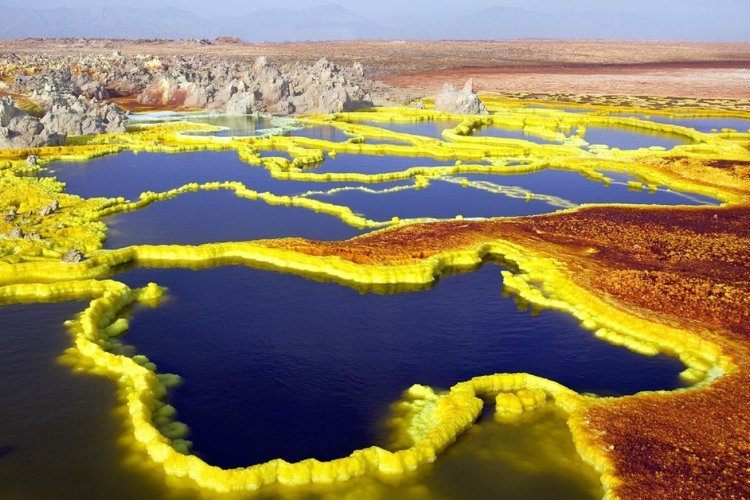 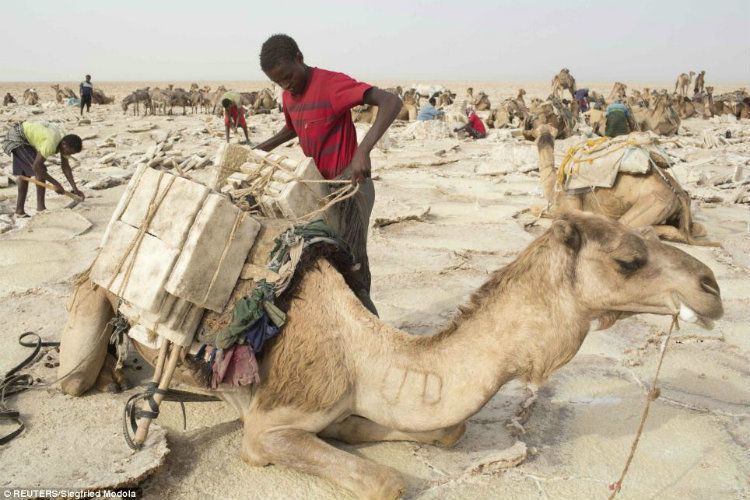 Dallol’s unforgiving climate has also made it one of the most remote areas on Earth. Roads are non-existent and camels are the only form of transport available.

In spite of these obstacles, the value of the salt produced in the region has attracted a number of extractive firms throughout the 20th century. In the early 1900s, a mining town sprang up in the crater, soon to be filled with Italian and American mining operations until the 1960s.

While these towns are all but abandoned today, salt merchants still travel to Dallol to collect minerals and haul it on camelback to Berhale or Mekele, where it’s transported to the Ethiopian highlands and on to Sudan. The salt fields supply nearly 100 percent of Ethiopia’s salt. 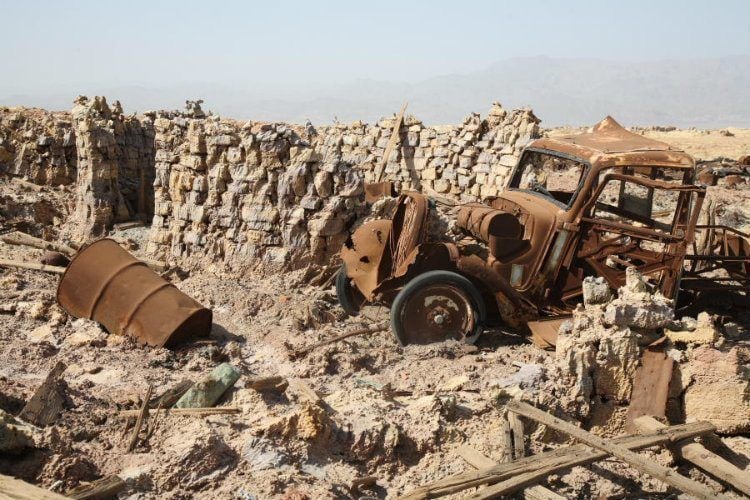 An abandoned car rots in the salty air of the desert. 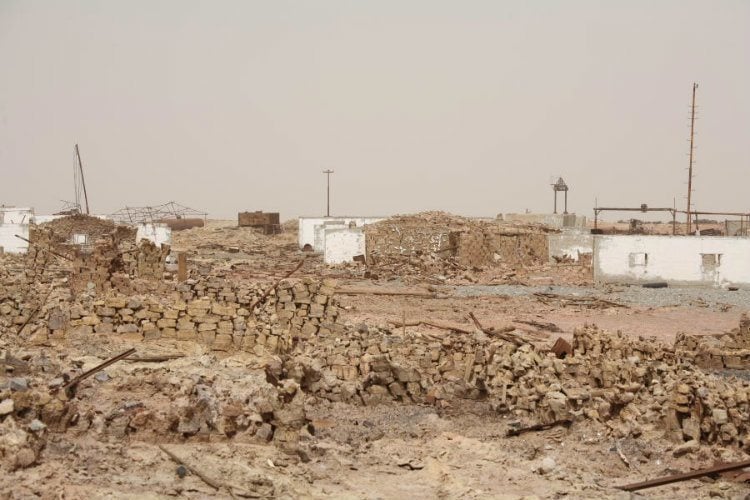 The remains of a mining camp in Dallol, Ethiopia.

It is this salt that adds another element of danger to the region. Dallol’s salt is worth a good deal of money, and thus serves as a potential source of conflict — especially in an area where various groups are vying for political and territorial control.

The armed nomadic Afar people protect it as theirs and defend the salt reserves–“white gold”–from encroaching thieves and rebels. Border skirmishes are ongoing between Ethiopia and Eritrea, and often spill into the Afar region. In fact, from 2007 to 2012 insurgent fighters kidnapped and killed tourists and locals in various attacks.

Visitors are advised to travel with armed guards and bring plenty of water. Dallol is unlike any other place on the planet and for the brave few, a once in a lifetime opportunity. For the Afar, however, it’s just home. Take a closer look at life in the hottest place on Earth in the following images: 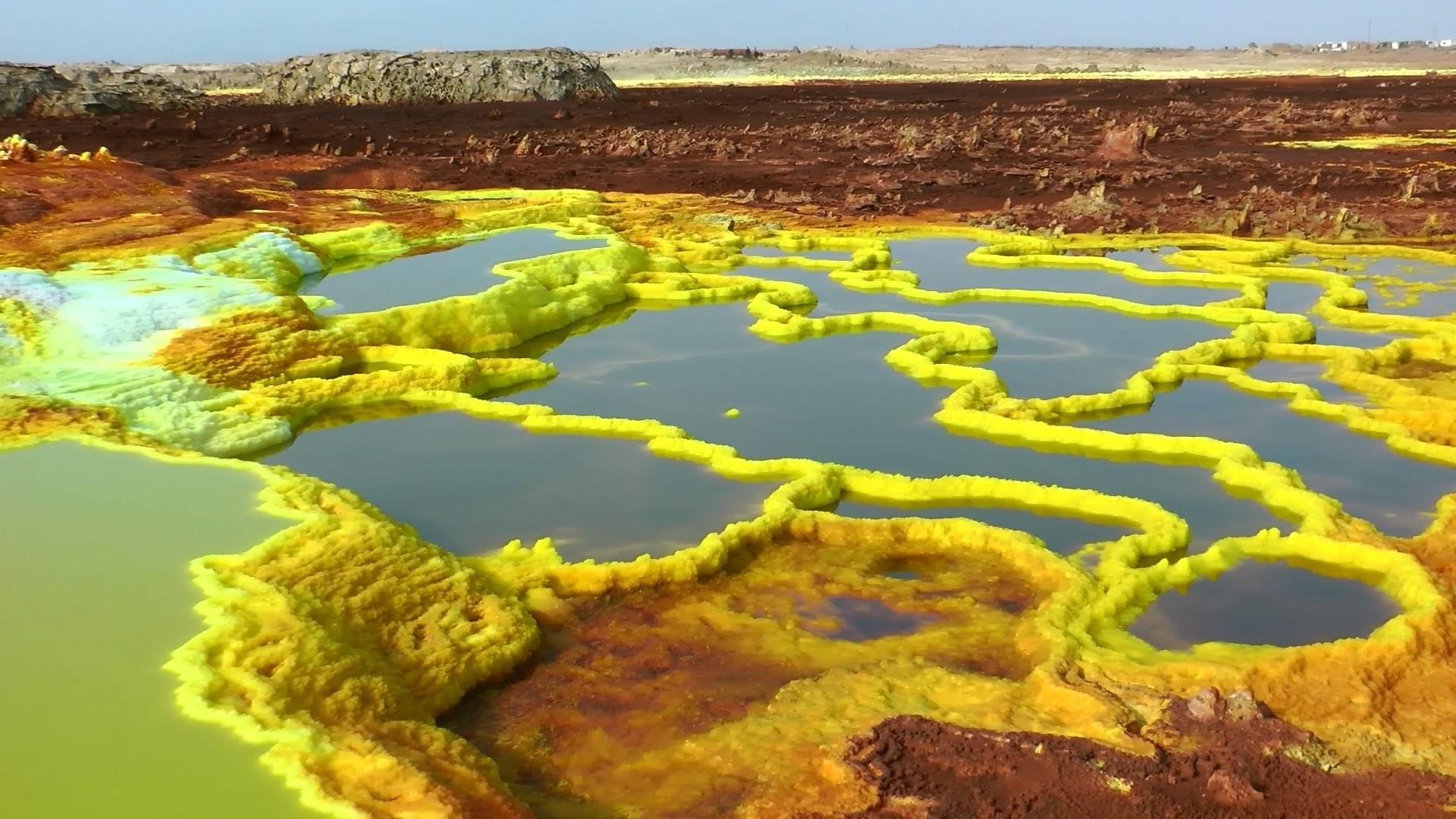 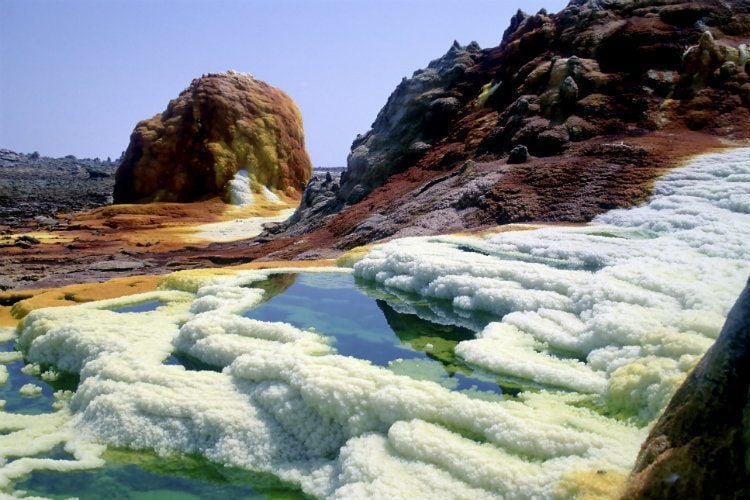 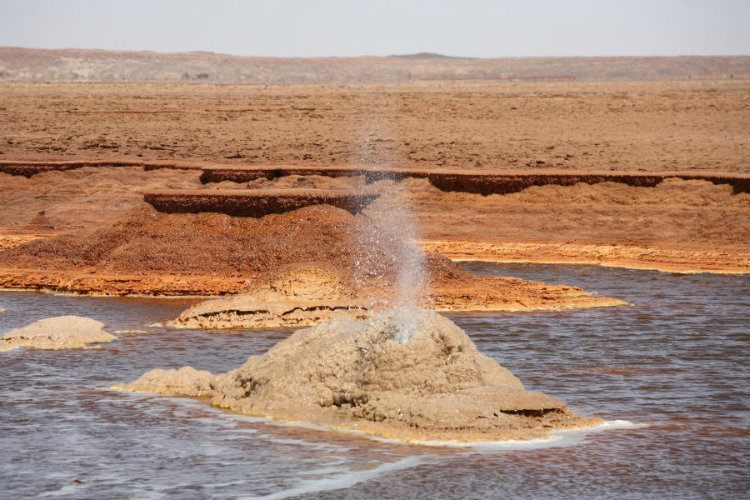 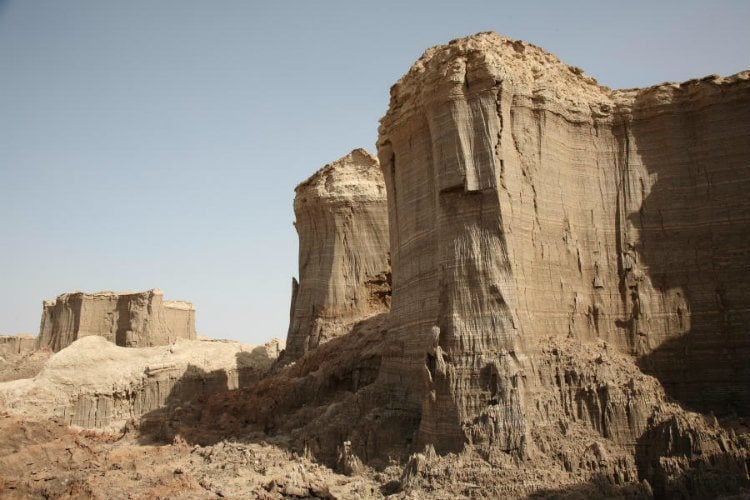 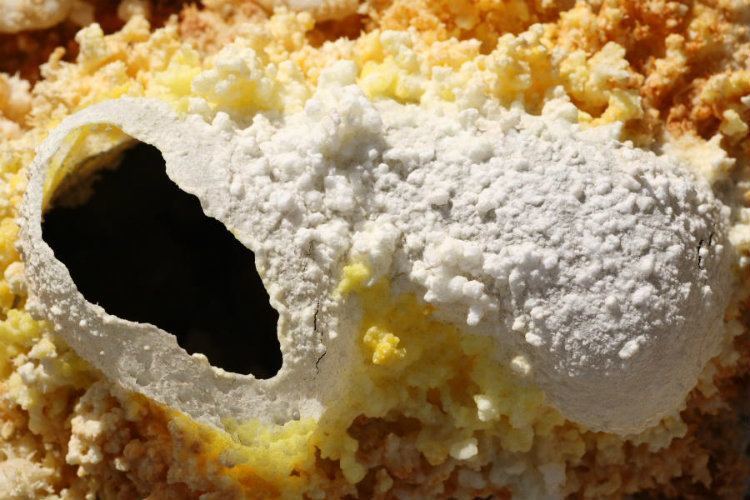 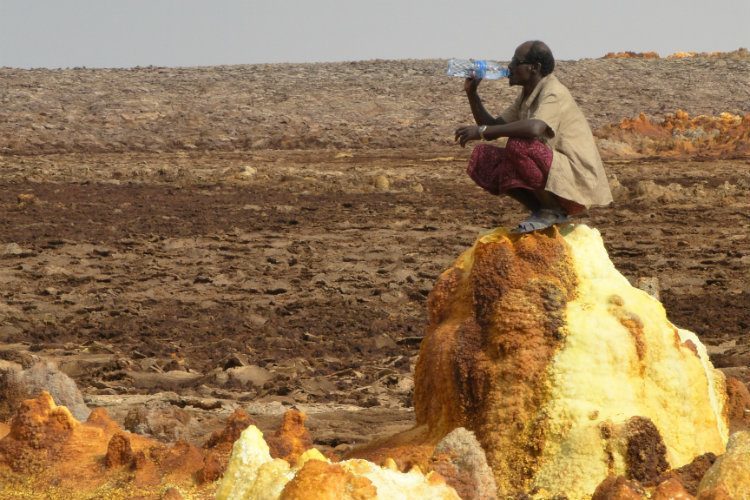 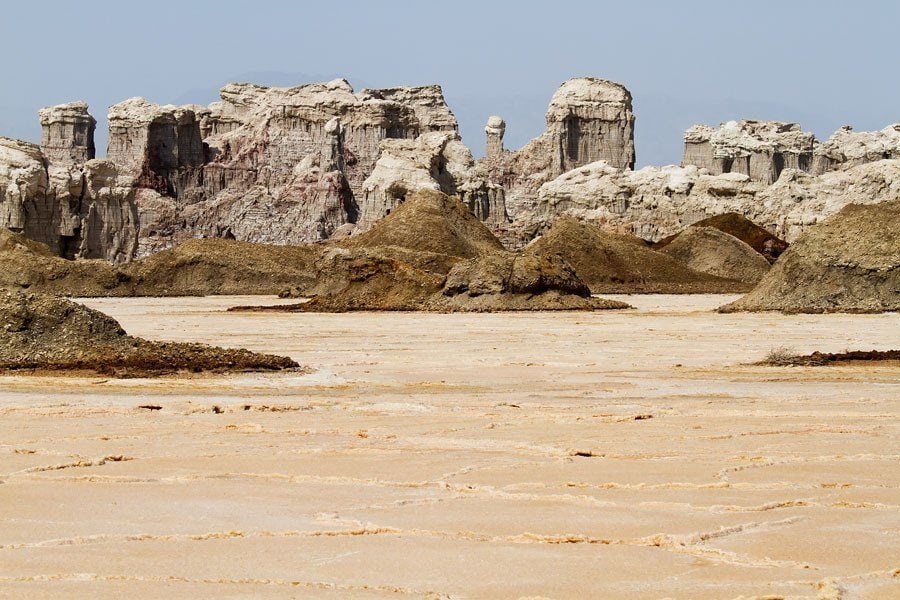 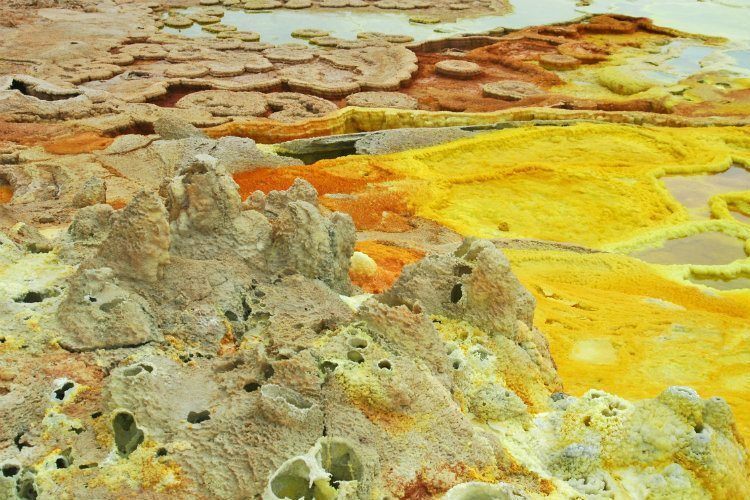 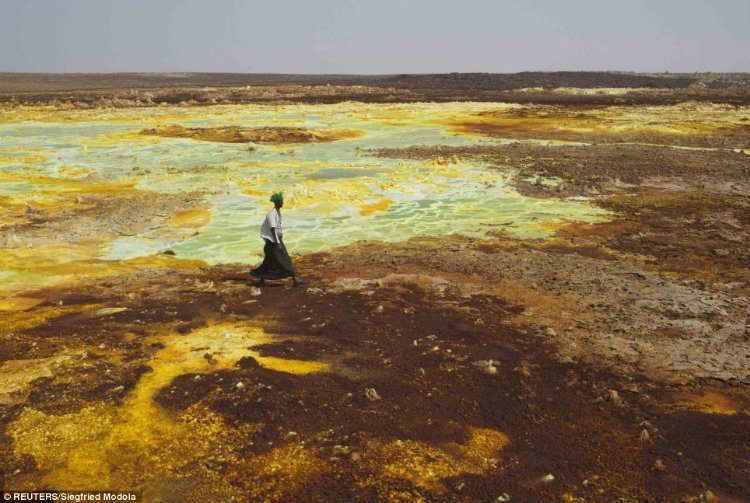 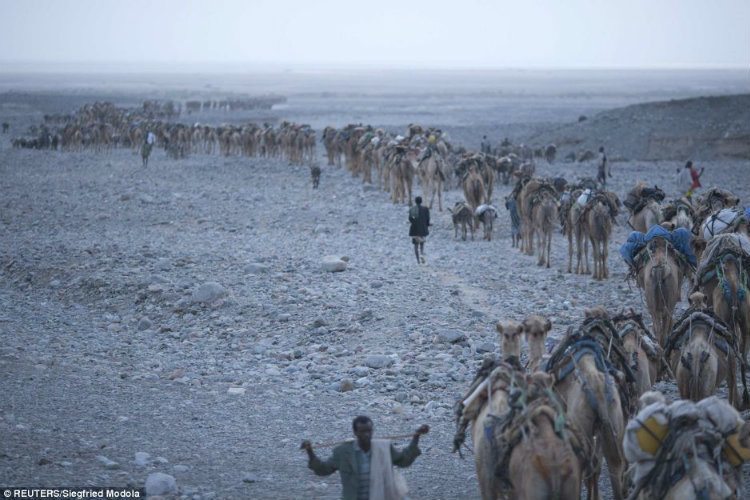 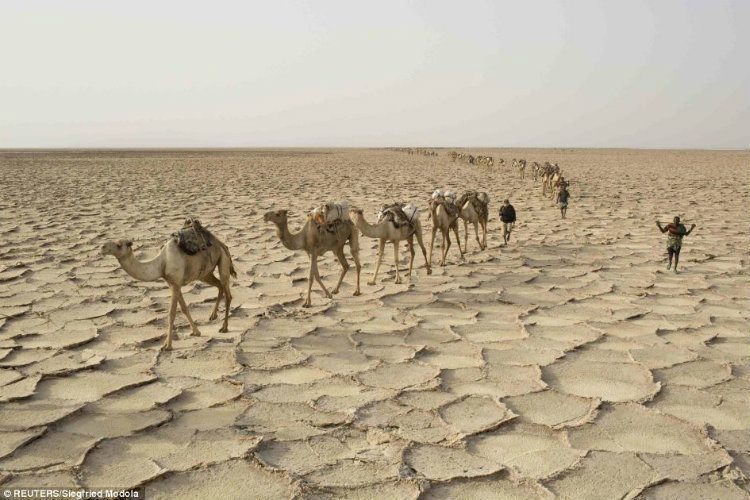 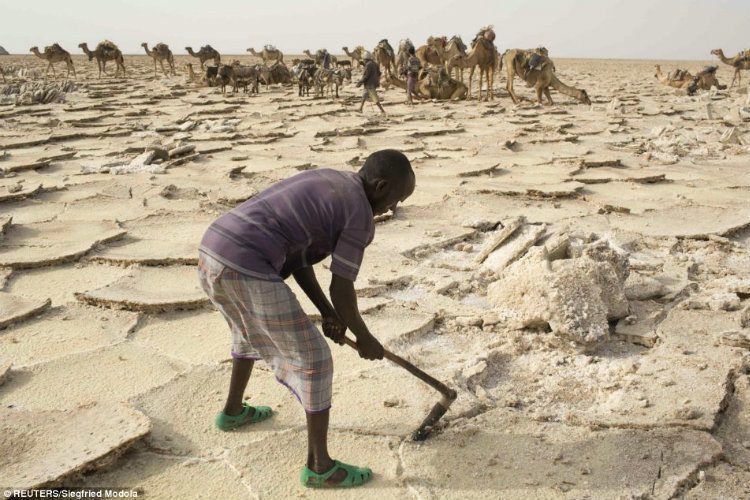 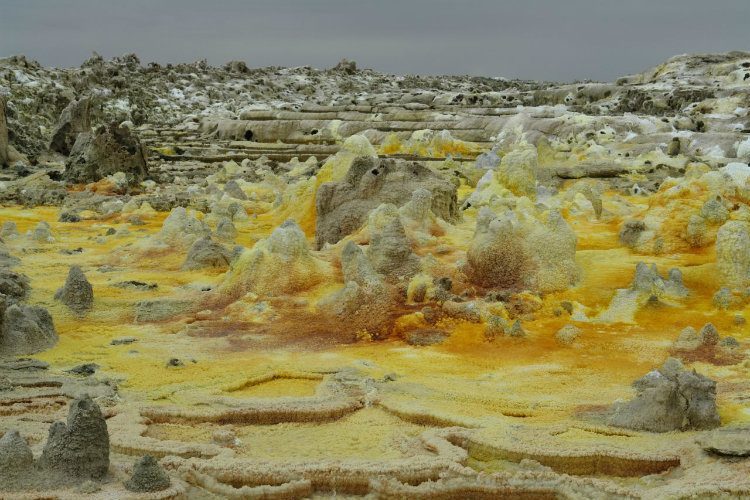 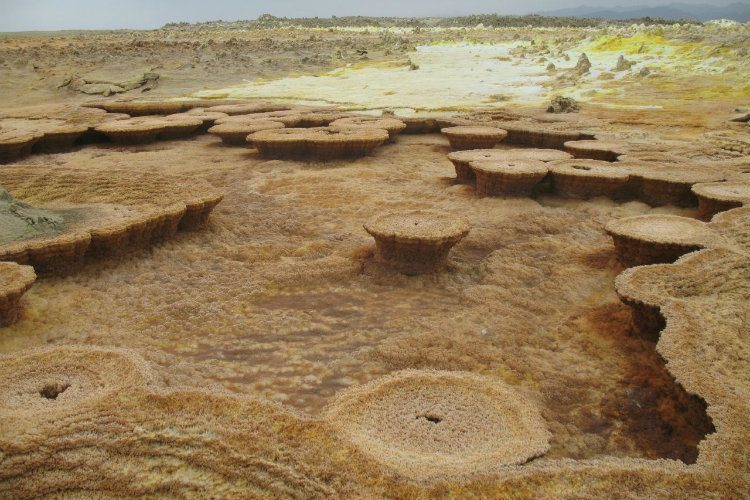 1 of 16
2 of 16
Source: Sometimes Interesting
3 of 16
A small geyser spits water from the middle of a lake. Source: Photo Volcanica
4 of 16
Salt formed into Dallol mountain pinnacles, rising 130 feet high. Source: Photo Volcanica
5 of 16
Egg-shaped fumaroles litter the landscape at Dallol. Source: Photo Volcanica
6 of 16
An Afar guard watches over Dallol’s valuable mineral deposits. Source: Salambo in Addis
7 of 16
Some of the surrounding desert sits more than 328 feet below sea level. Source: Sometimes Interesting
8 of 16
Chemical compounds give the deposits their rainbow colors. Source: Wikipedia
9 of 16
Salt merchants travel over rough terrain to gain access to the rich mineral deposits in Dallol. Source: Daily Mail
10 of 16
Without roads, visitors and workers must use camel caravans to enter the Afar Depression. Source: Daily Mail
11 of 16
Merchants cut the salt into square slabs for transport back to the nearest population center. Source: Daily Mail
12 of 16
A road is being built through the desert. Source: Daily Mail
13 of 16
Minerals build up over time, creating fascinating shapes and crusts. Source: Xcite Fun
14 of 16
The strange erosion patterns result from acids boiling to the surface of the Earth. Source: Xcite Fun
15 of 16
Source: Salambo in Addis
16 of 16 For more on Dallol and the geological makeup of the hottest place in the world, check out the video below:

Want to learn about more extreme places after looking at Dallol, the hottest place on Earth? Check out our posts on the world's driest city and the world's coldest city. Then, check out six of the most remote places on Earth.