This isn't the first time neighbors have gone after Howard Banks' flags. 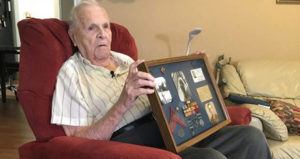 Howard Banks loves his flags. His neighbors, however, appear to feel otherwise.

Over the years, the 92-year-old World War II veteran has hung several patriotic patchworks from a pole in his Kaufman, Texas, property — and has seen all of them destroyed.

The Marine flag — ripped up a year ago. The American flag — shredded. His latest American flag? It’s staying up, even if it means Banks falls.

Fox News reports on the assault of Howard Banks.

According to Banks, he was sitting in his home when he heard someone messing with his flag outside. So Banks, who lost his vision from a flare in Iwo Jima, investigated.

“I walked out, hanging onto the railing and stepped down. That must’ve startled them,” Banks said. And that’s when he met the perpetrators, for whom police are now searching.

It’s also when things got messy.

“They could see me. I couldn’t see them,” he said. “I turned and looked in the other direction, and about then — ‘wham!’ They knocked me down.”

While the would-be thieves scrammed, neighbors rushed to the aid of Banks, who suffered a twisted knee and still has several abrasions on his body.

But the legally blind veteran says his eyes will always remain on the stars and stripes — even if it means taking a tumble every now and then.

“I can take it,” Banks said. “I think we all had that same feeling, that the flag was our identity.”

“We were Americans. The fact that I’m getting older, and the less I can do… at least I can still do that.”