Meet Hugh Thompson, The Hero Who Stopped The Mỹ Lai Massacre — And Was Branded A Traitor For It

An American helicopter pilot during the Vietnam War, Hugh Thompson Jr. threatened his fellow soldiers at My Lai that he would shoot them if they didn't stop killing civilians.

On March 16, 1968, a company of U.S. soldiers stormed into the Vietnamese village of Sơn Mỹ and began shooting. For hours, they raped, mutilated, and slaughtered innocent civilians until a helicopter pilot named Hugh Thompson Jr. put his own life on the line to stop the massacre.

By the end of what has become known as the Mỹ Lai massacre, the Vietnamese government estimates that American soldiers killed at least 504 people, mainly women and children.

The troops also burned the village and Sơn Mỹ’s surrounding hamlets to the ground and slaughtered the livestock. 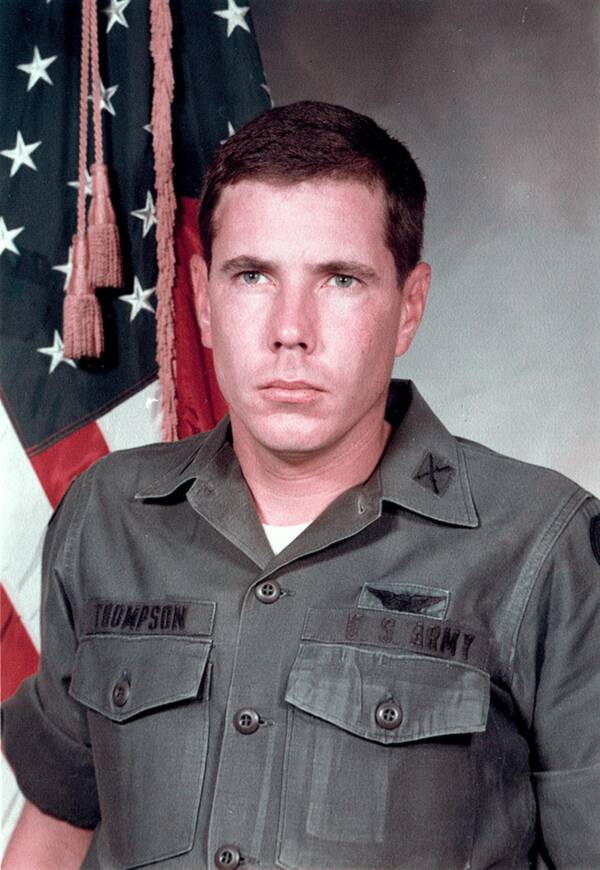 And the Army company only stopped because Thompson literally put himself between the soldiers and the civilians — and threatened to shoot them if they didn’t end the killings.

But despite Thompson’s heroic actions, the Army tried to cover up the massacre. And when Hugh Thompson testified against William Calley, the officer who ordered the massacre, Thompson received death threats.

The Mỹ Lai massacre started when the U.S. Army declared everyone in a broad region of Vietnam either part of the Viet Cong or sympathizers. Charlie Company arrived in Mỹ Lai with orders to destroy the village.

On the morning of March 16, 1968, the people of Mỹ Lai were making breakfast when soldiers stormed in. 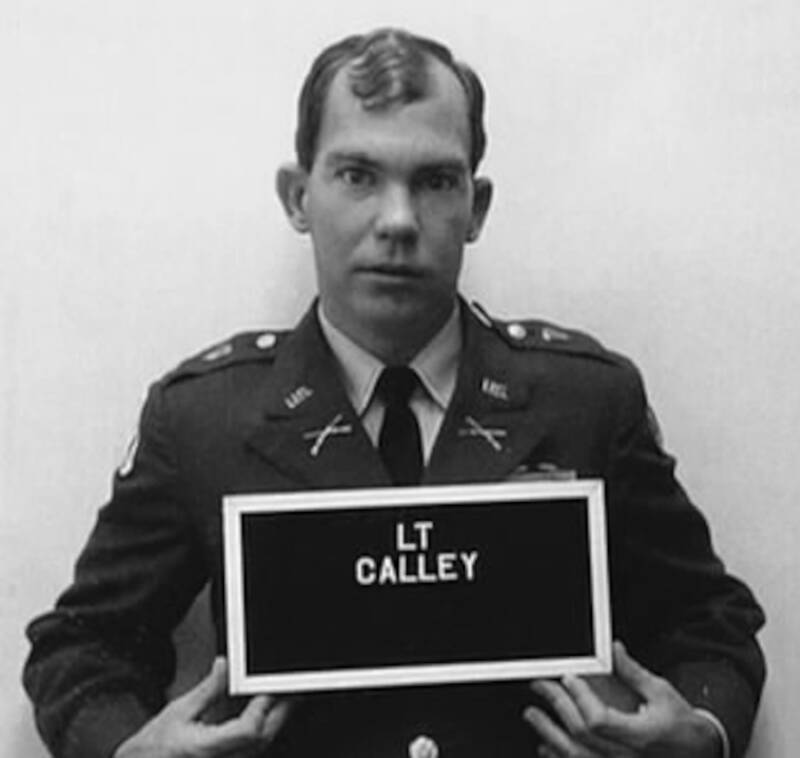 U.S. ArmyWilliam Calley, the officer who ordered the slaughter at Mỹ Lai.

William Calley, the officer in charge of Charlie Company, ordered American soldiers to round up the villagers and open fire. As children ran for safety, soldiers gunned them down.

“I saw them shoot an M79 [grenade launcher] into a group of people who were still alive,” said Sgt. Michael Bernhardt, who was at Mỹ Lai. “But it was mostly done with a machine gun. They were shooting women and children just like anybody else.”

The villagers offered no resistance as U.S. soldiers shoved them into a ditch and opened fire with machine guns.

While the massacre took place, helicopter pilot Hugh Thompson and his crew flew over the jungle, offering air support.

From the air, Thompson and his two-person crew quickly realized American soldiers were slaughtering innocent civilians.

“We started thinking what might have happened, but you didn’t want to accept that thought,” Thompson said in a 2000 interview, “because if you accepted it, that means your own fellow Americans, people you were there to protect, were doing something very evil.”

From his helicopter, Hugh Thompson could not communicate with Charlie Company on the ground.

“When Hugh realized it was our people doing this killing, he knew he had to take drastic measures,” recalled Larry Colburn, a gunner on Thompson’s crew.

Thompson landed his helicopter next to a ditch that contained 150 people — many dead, but many others wounded and trying to escape. A sergeant stood by the ditch. Thompson ran over and said, “These are civilians, we got to help them out.” 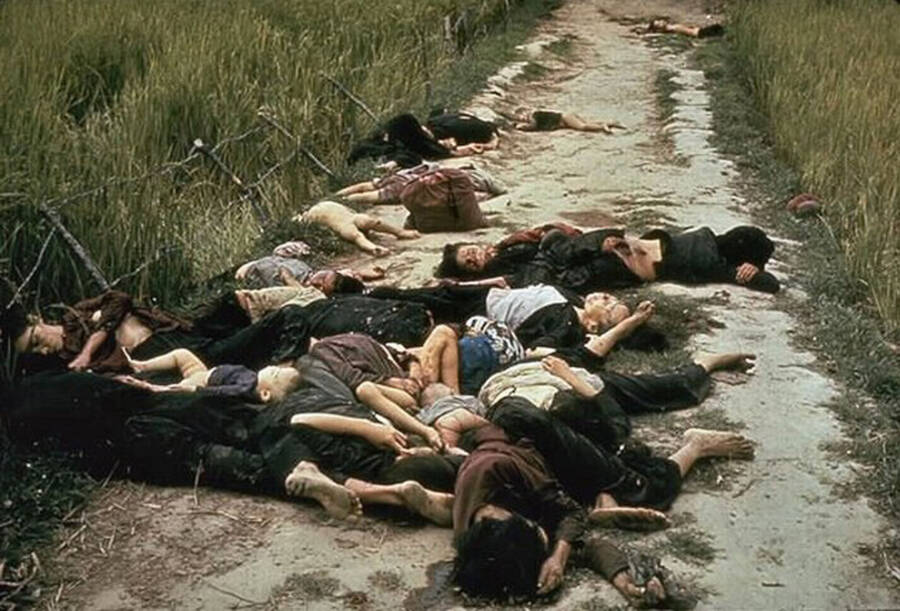 The sergeant waited until Thompson left and then fired on the helpless civilians.

Furious, Hugh Thompson landed again, this time in front of a bunker where civilians were hiding. Nearby, a squad of soldiers approached with weapons drawn.

“These people are going to die,” Thompson said to his crew. “I’m not going to let this happen, we’ve got to do something. Are you guys with me?”

“To see people herded up like so many animals, marched into a ditch and machine-gunned?” Colburn said.

“I’d never seen nor heard of anything like that before, except in World War II. Hugh told me that was what was going through his mind, he was thinking of Nazi Germany, people digging trenches, forced to march into those trenches, mass graves.”

Thompson told his crew, “I’m going to go over to the bunker myself and get these people out. If they fire on these people, or fire on me while I’m doing that, shoot ’em!”

Thompson and his crew managed to evacuate the civilians and stop the massacre. Back at the base, Thompson threw his flight helmet on the ground. “I’ll never fly again,” he vowed.

“This is not what I’m here for. This is not how this military organization is supposed to conduct operations. I’ll have no part of this, I’ll tear these wings off and never fly again!”

And when Thomson reported the horrific actions, the Army tried to cover up the Mỹ Lai massacre.

Hugh Thompson reported the massacre to his commanding officer. Then he assumed the Army initiated an investigation. Instead, the Army hid the slaughter of hundreds of innocent people, including 182 women and 173 children. Among those numbers were 17 pregnant women and 56 infants.

The truth of the Mỹ Lai massacre did not come out until a year and a half later when a soldier who’d seen reports on the massacre contacted a journalist.

Finally, the Army launched an inquiry. They interviewed Hugh Thompson and his crew. And they recommended charging 28 officers for the massacre and coverup. 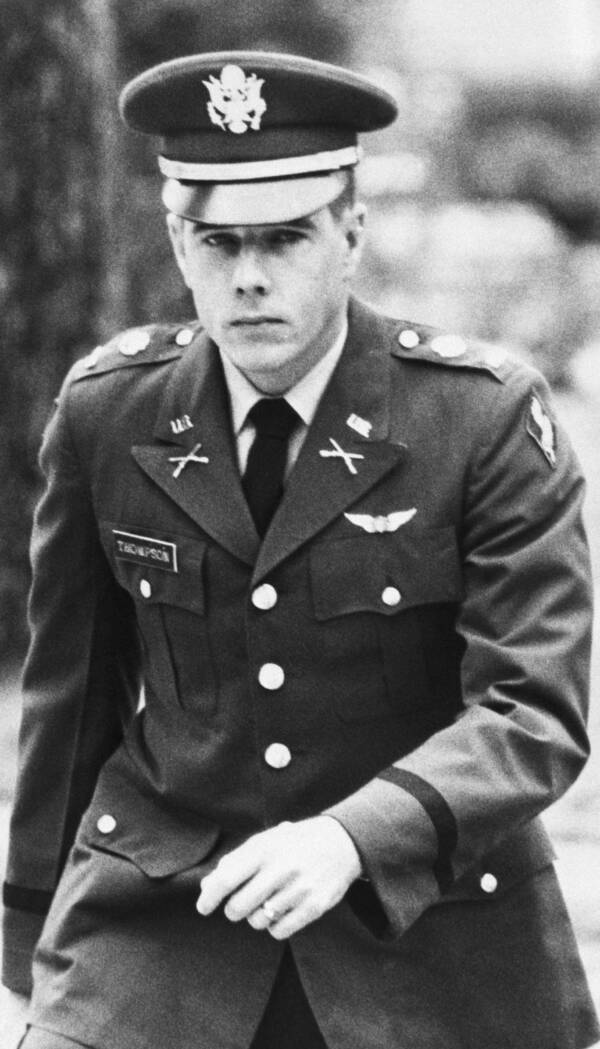 Bettmann/Getty ImagesHugh Thompson on his way to testify against William Calley on November 23, 1970.

In November 1970, the Mỹ Lai trials started and Hugh Thompson testified against William Calley. But many in the Army — and the public — supported Calley over Thompson. The hero received death threats for speaking out about the massacre.

“It was denial on the part of the public,” said Colburn. “Hell, I didn’t want to believe it, either, but I had no choice because I saw it.”

Calley was the only person found guilty out of the 14 charged. He received a life sentence in 1971 for premeditated murder — which was later reduced to 10 years. Calley was paroled just three years later, in 1974, after Richard Nixon commuted his sentence. 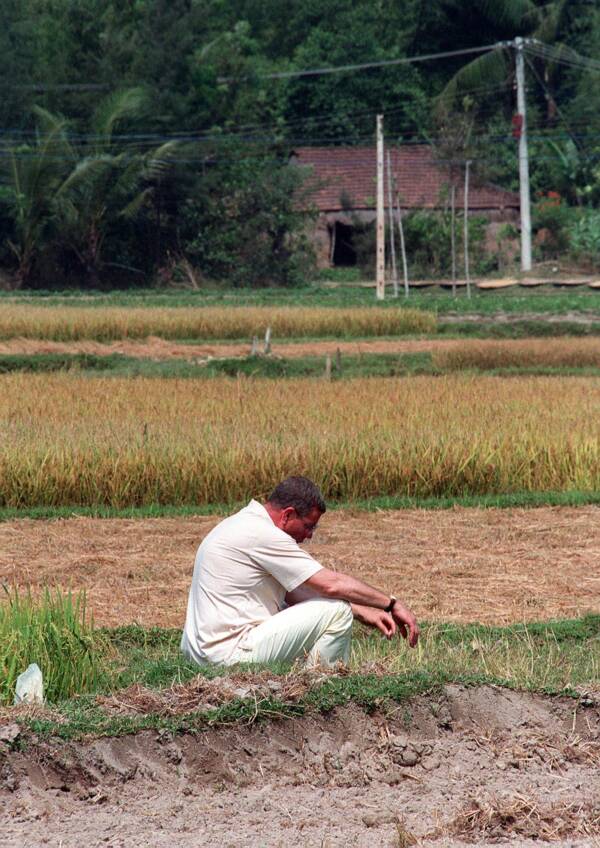 HOANG DINH NAM/AFP via Getty ImagesHugh Thompson returned to Mỹ Lai in 1998 and met some of the people he saved. Thompson spent the rest of his life wondering if he could have saved more lives.

Thompson left the Army in 1983 and became a private helicopter pilot in the South. And although he lived with post-traumatic stress disorder, alcoholism, and nightmare disorder for decades, he eventually became a veterans’ counselor for the Louisiana Department of Veterans Affairs.

Then, in 1998, the Army awarded him the Soldier’s Medal for heroism. And on the 30th anniversary of the massacre, Hugh Thompson returned to Mỹ Lai.

“One of the ladies that we had helped out that day came up to me and asked, ‘Why didn’t the people who committed these acts come back with you?'” Thompson recalled.

“And I was just devastated. And then she finished her sentence: she said, ‘So we could forgive them.'”

After learning about the heroism of Hugh Thompson Jr. during the Mỹ Lai Massacre, read about the Gulf of Tonkin incident that started the Vietnam War. Then, take a look through these declassified Vietnam War photos.