The first ichthyosaur fossil was discovered around 1818 and was thought lost after World War II, but researchers have found two casts in the United States and Germany. 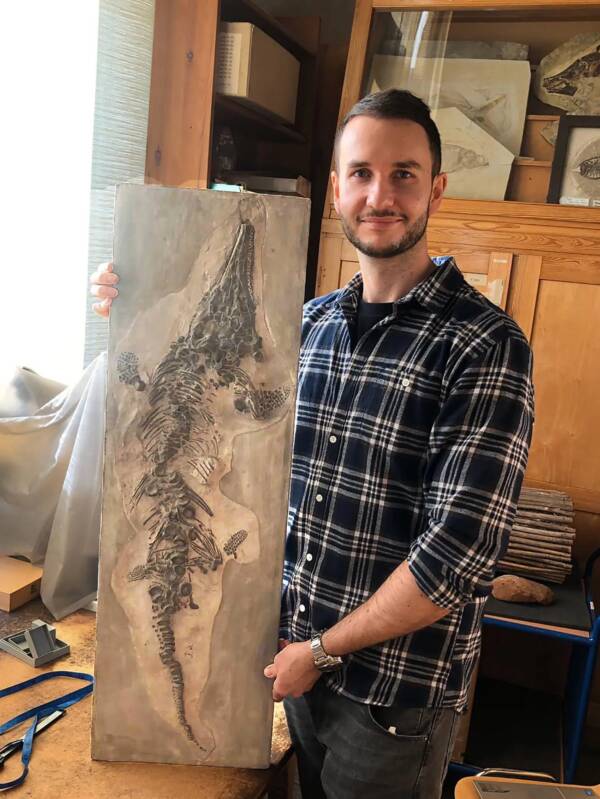 The University of ManchesterDean Lomax, the lead author of the recent study, with the ichthyosaur cast found in Berlin, Germany.

Shortly after midnight on May 11, 1941, a Nazi bomb hit the Royal College of Surgeons in London, England. The explosion severely damaged the building and destroyed thousands of specimens it held in its collection, including the first complete fossil of the extinct ichthyosaur. Though the fossil was thought to be lost to history, researchers have stumbled upon at least two previously unknown casts made from the rare specimen.

According to a study published in the Royal Society Open Science, researchers have unearthed casts made of the fossil at the Yale Peabody Museum in the United States and the Natural History Museum in Berlin, Germany.

“We have discovered two plaster casts of the specimen, although no record exists of casts ever being made,” the researchers explained in their study. “Significantly, these verify the accuracy of the published drawing of the specimen, and clarify morphologies of some of the bones.”

According to The New York Times, the study’s co-authors Dean Lomax, a paleontologist at the University of Manchester, and Judy Massare of the State University of New York, came across the first cast in 2016 while searching for overlooked ichthyosaurs in the Peabody Museum’s collection.

“We both looked at each other, and we’re like, ‘Why does that seem familiar?'” Lomax told The New York Times of their surprise discovery. “There was just something about this cast.”

Indeed, Lomax soon realized that they’d found a copy of the lost ichthyosaur fossil, which was discovered around 1818 — probably by overlooked fossil hunter Mary Anning — and named by Royal College of Surgeons anatomist Everard Home the following year.

Even more thrillingly, Lomax came across a second cast in 2019 while exploring the archives at the Natural History Museum in Berlin, Germany.

“Having spent time studying the Yale cast already, I immediately knew what it was, and I had a huge grin on my face,” Lomax told Live Science. 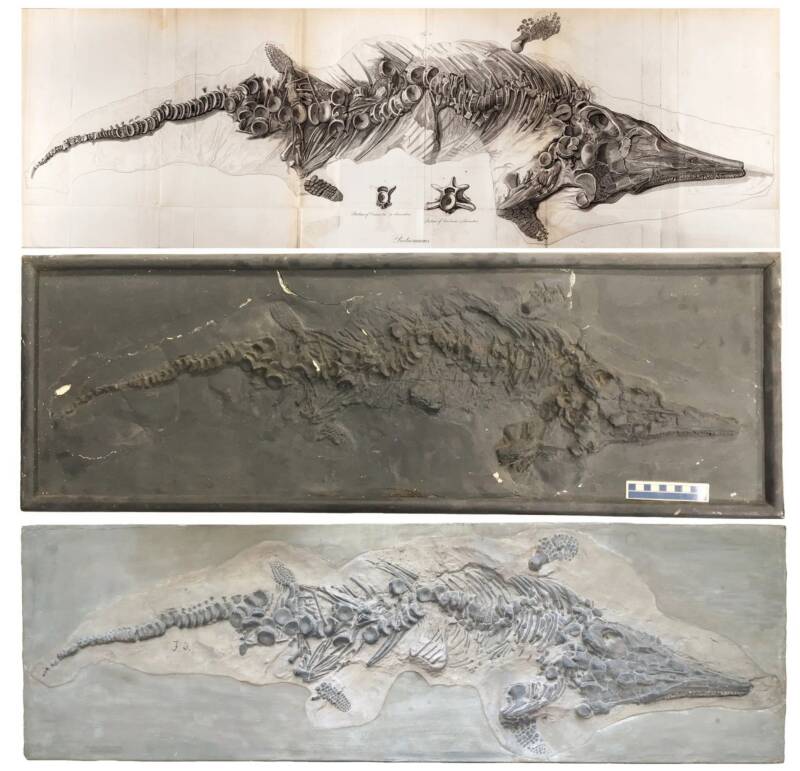 The Royal SocietyFrom top to bottom: an 1819 drawing of the fossil, the Yale cast, and the Berlin cast.

Lomax and Massare discovered that the ichthyosaur cast found in Berlin was in even better shape than the one they’d found in the United States. According to Live Science, it was probably made later than the Yale cast and with modified techniques to better capture the ichthyosaur’s likeness.

“Considering that the original was destroyed during World War II,” Lomax and Massare noted in their study, “it is somewhat ironic that the cast in the best condition is in the Berlin Museum.”

Both casts are significant because they differ slightly from an 1819 drawing made of the original fossil. As The New York Times notes, the illustration depicts the ichthyosaur with four or five tiny bones in the left frontal fin, which researchers have failed to find in any ichthyosaur specimen since. Live Science also reports that the ichthyosaur’s femur looks “more slender” and “more symmetrical” in the drawing than in the Berlin cast. 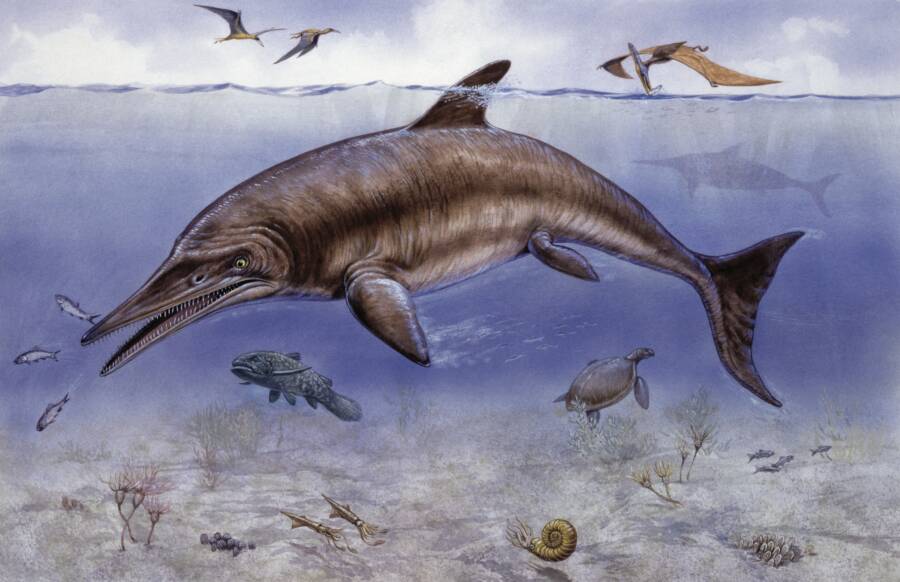 De Agostini via Getty ImagesA depiction of what the ichthyosaur might have looked like before it went extinct.

Finding the forgotten casts in the U.S. and Germany has convinced Lomax and Massare that other copies of the lost ichthyosaur might be out there, hidden in the archives of some museum. Indeed, they’ve already found a possible third cast in Bonn, Germany.

According to The New York Times, a paleontologist named Martin Sander rescued a broken ichthyosaur cast from the garbage while working at the Goldfuss Museum in Bonn 30 years ago. He didn’t think much of it until he was contacted by a reporter to weigh in on Lomax and Massare’s new study. Now, he thinks that the cast he saved might be another copy of the first ichthyosaur fossil — and Lomax agrees.

Indeed, Lomax is hopeful that the discovery of ichthyosaur casts in the U.S. and Germany will encourage museum archivists to take another look at what they have in their collections. Possibly, there are more casts out there waiting to be found.

“This report will have people taking a closer look at some of their casts,” Lomax said.

After reading about the ichthyosaur thought to be lost to Nazi bombs, see how scientists in the Galápagos stumbled upon a Fernandina giant tortoise — which hadn’t been seen since 1906. Or, discover how researchers came across the biggest blue whale fossil ever found.