Jacob's Well Natural Area is a park outside of Austin, Texas, with a water system that goes at least 4,500 feet underground — and has killed at least nine people trying to explore its depths.

Jacob’s Well is a spring located in Central Texas, just outside the town of Wimberley. While it may look like a giant puddle at a glance, it’s actually the mouth of an underwater cave system that can take daring divers more than 130 feet below the surface of the Earth.

This fascinating natural formation has attracted hundreds of people, some of whom have lost their lives daring to explore its dark depths. 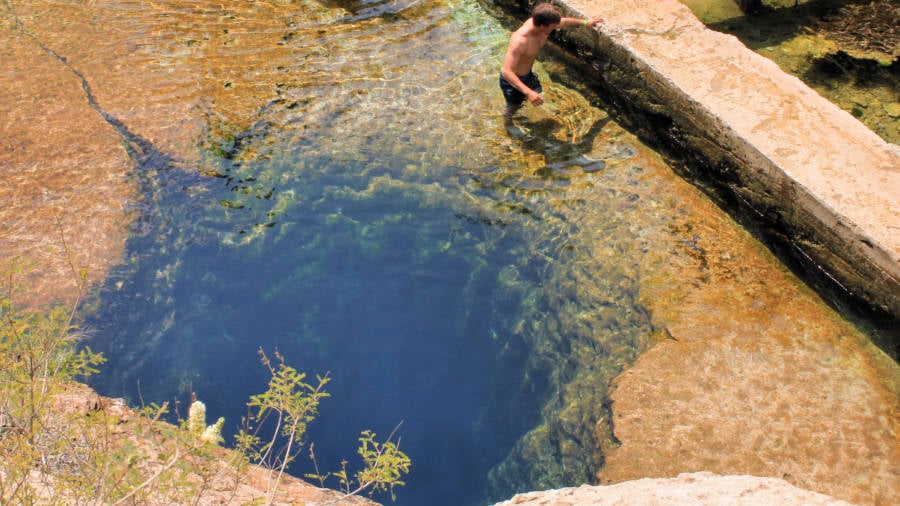 Jacob’s Well is a spring that flows to the Earth’s surface through a 12-foot-wide opening in the creek bed of Cypress Creek in the Texas Hill Country of Central Texas.

Jacob’s Well is what’s known as a karstic spring: one that’s found at the end of an underground cave system, making it a prime opening to enter these underwater caves.

Such caves make karstic springs like the one at Jacob’s Well Natural Area rather interesting, albeit dangerous, places to explore.

With water continually flowing into Jacob’s Well from the surrounding Trinity Aquifer at a consistent temperature of about 68 degrees all year long, it’s a popular spot for locals and tourists alike to come beat the Texas heat.

But the real attraction of Jacob’s Well is the large eerie opening of the spring that leads down into the depths below. 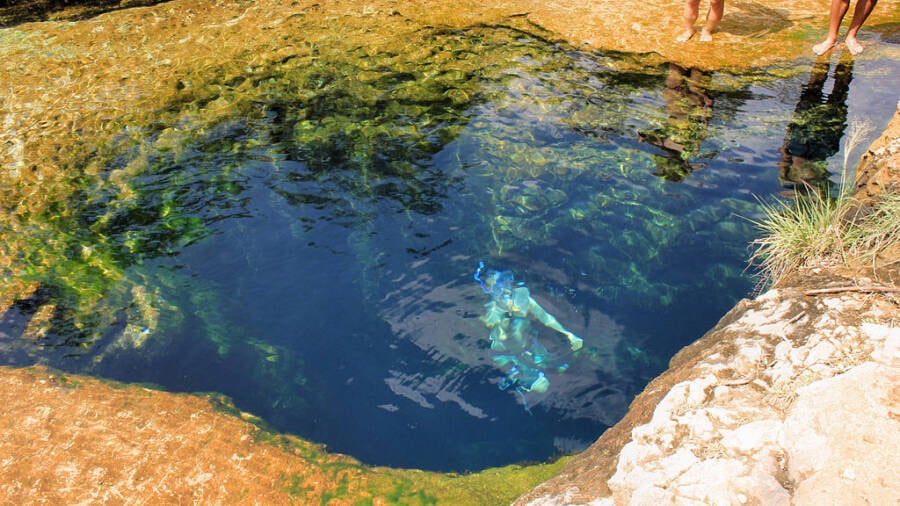 Diver coming up from the depths at Jacob’s Well.

Local thrillseekers leap into the opening from the rocks above, but it takes a real daredevil to dive down into Jacob’s Well. The cave goes down vertically for 30 feet but that’s only what you can see from the surface.

The tunnel then turns at an angle and continues downward for about another 100 feet. And it doesn’t stop there.

Jacob’s Well has been explored by divers since the early parts of the 20th century. There are even reports of divers in the 1930s attempting to use a milk bucket and a rubber hose to create a makeshift diving helmet.

However, it wasn’t until 2000 that professional cave drivers with proper scuba gear began to explore the caves.

Their efforts culminated in 2007 with the creation of the Jacob’s Well Exploration Project. The goal of the project was simple yet ambitious: map the entire cave network underneath the Well.

The project revealed that the central passage of Jacob’s Well eventually breaks off into two main tunnels. One of these branches out for an astonishing 4,500 feet (0.85 miles) away in one direction and the other diverges 1,500 feet.

As the tunnels snake off in either direction, the average depth of Jacob’s Well stays around 120 feet but reaches all the way down to 137 feet at its deepest point. 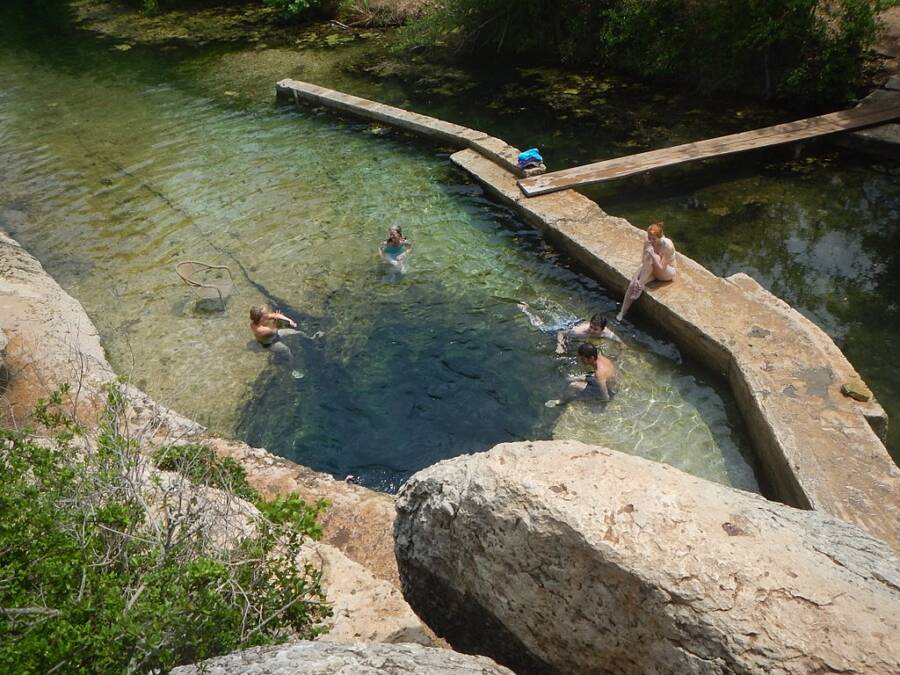 Wikimedia CommonsPeople relaxing in Jacob’s Well next to the cave opening leading 30 feet below.

The Dangers Of This Massive Underground Cave

Combined with ideal water temperatures and visibility, the depth and extensive cave system have made Jacob’s Well a popular diving attraction. In particular, Jacob’s Well is favored among freedivers — people who dive by holding their breath and don’t use any scuba equipment.

Some freedivers have reportedly gone down as far as 100 feet into Jacob’s Well. This type of diving is understandably dangerous, especially in an area where it’s easy to get stuck or lose your way.

That’s certainly the case for Jacob’s Well, where the cave below is tricky to maneuver, with lots of twists and sharp angles that make it difficult to navigate. Furthermore, the cave openings are narrow, making it easy for divers and their equipment to get stuck in the watery depths.

Allegedly, some of the deeper caves in the well have such narrow openings that you have to remove your oxygen tank to get inside.

As a result of these dangers, the caves under Jacob’s Well have claimed the lives of numerous divers since the early 1900s. Despite this, it continues to attract new divers every year.

One recent brush with death at Jacob’s Well happened in 2015, when 21-year old Diego Adame attempted to freedive into the cave.

The Texan thrillseeker caught the whole frightening ordeal on camera:

The video shows Adame diving into Jacob’s Well without any supplemental oxygen. After reaching the bottom of the initial opening, he loses one of his flippers when it slips off his foot at about 100 feet below the surface.

Losing a flipper can make it very difficult to swim back up to the surface, and some divers in that very situation have blacked out while trying. Adame reacts by immediately turning around.

Unfortunately, to make matters worse, he loses his flashlight when pushing off the cave’s walls. “For a split second I thought of death and myself dying that day,” he later recalled.

Luckily, Adame didn’t panic and kept his breaths controlled, not depleting the precious oxygen. He immediately cut off his supply belt to eliminate extra weight and rapidly made his way back to the surface before running out of air.

Despite the near-death experience, Adame’s enthusiasm for risky dives remained. “I don’t have plans on quitting freediving anytime soon,” he said just afterward, “and I’ll be back at Jacob’s Well later this summer.”

Stories such as these highlights the ongoing danger of diving at Jacob’s Well. 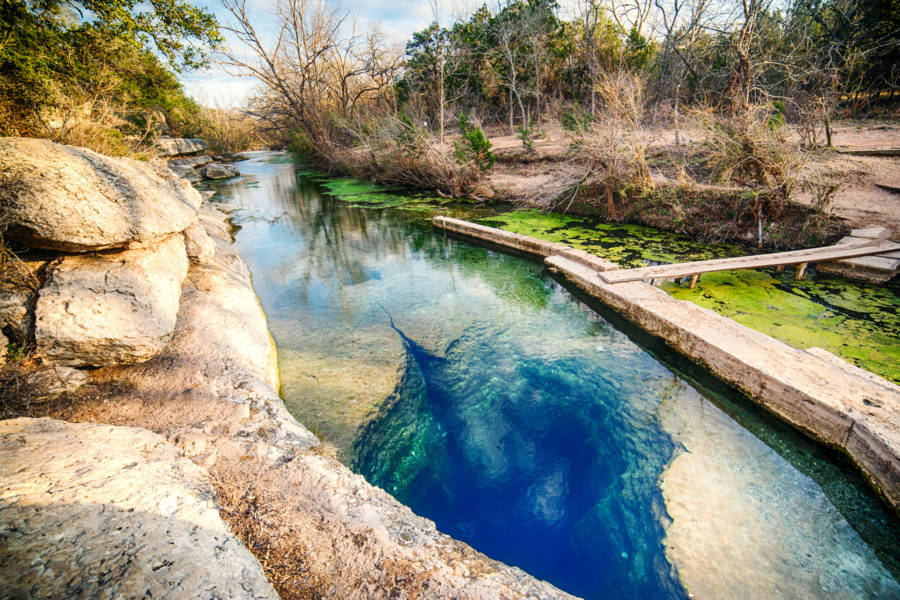 Unfortunately, other divers have not been as lucky as Adame. There are reports of at least a dozen fatalities that have occurred at Jacob’s Well throughout the years, earning it a reputation as one of the world’s most dangerous diving spots.

And because of the depth of the Well, some remains have not been recovered for years. For example, the body of Kent Maupin, a diver who went down into the caves in 1979, was not discovered until two decades later, when divers happened to find his remains during a mapping expedition.

But despite the well-known dangers, Jacob’s Well Natural Area remains a popular diving spot. We don’t see this changing anytime soon as many people prefer to dive precisely because of the thrill associated with the danger.

After this look at Jacob’s Well Natural Area, check out the most dangerous places on planet Earth. Then, take a photographic tour through the days when horses used to dive into the water from great heights for people’s entertainment.