Life In A Camp 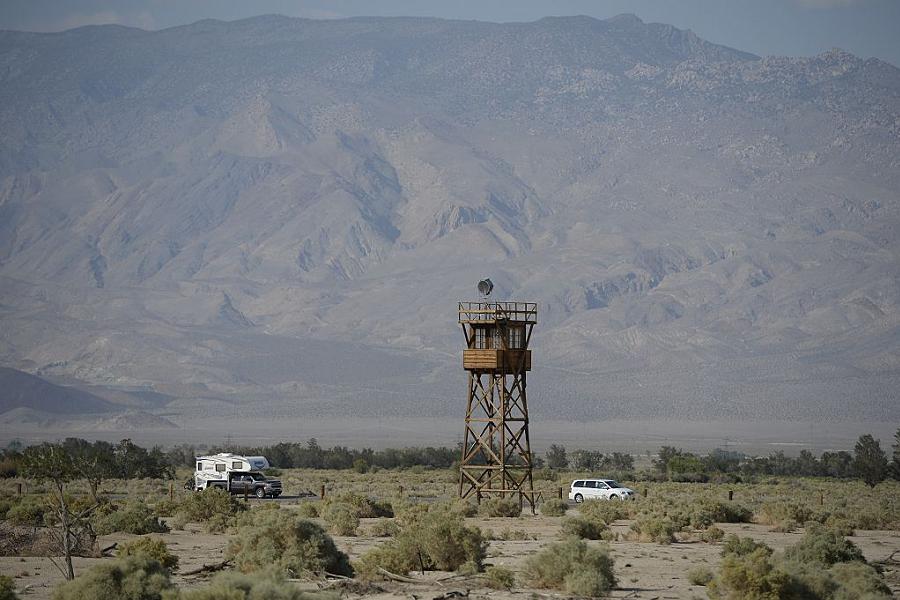 It wasn’t always a smooth transition. Though the prisoners usually arrived at their camps as families, lending an element of stability that was lacking in other countries’ concentration camps, it was inevitable that some inmates would grind against the camp authorities. The camp at Tule Lake, located on California’s remote Lassen Lava Beds, and the camp that housed George Takei‘s family from Los Angeles, was set aside for discipline cases and internees who refused to swear to obscene loyalty oaths in other camps.

It was there that Ben Takashita’s older brother started organizing other inmates to make demands on camp personnel. His activities, coming as they did from a man already suspected of subversion, would not be tolerated. Eventually, camp guards had had enough. According to Ben, one day a squad of military police came to take his brother away. They drove him out into the wilderness under guard, where according to Ben:

“They got to a point where they said, ‘Okay, we’re going to take you out.’ And it was obvious that he was going before a firing squad with MPs ready with rifles. He was asked if he wanted a cigarette; he said no. . . You want a blindfold? No. They said, ‘Stand up here,’ and they went as far as saying, ‘Ready, aim, fire,’ and pulling the trigger, but the rifles had no bullets. They just went click.”

Terror tactics like this brought many of the agitators in the camps under control, but there was definitely a line that camp guards had to observe. That line was crossed at Topaz in March 1943, when a sentry shot a 63-year-old chef named James Wakasa for walking too close to the perimeter fence. Former inmate Ted Nagata remembered the incident:

“Somebody said [Wakasa] was hard of hearing, and the guard told him to stop, and he didn’t understand.”

One month later, another guard fired a warning shot at a couple walking near the fence. These incidents horrified the inmates, who immediately went on strike, refusing to do any war work or cooperate with the authorities. Higher-ups seem to have realized their error, and from that spring they started making changes to how the camps were run.

The changes mostly involved a demilitarization and loosening of control over the camps, as if the camp management had developed a bad conscience their superiors still lacked. According to Nagata, by the end of 1943:

This dropping of the guard created a bizarre disconnect between the illusion of liberty and the real confinement the inmates still had to deal with. Though armed guards were removed and children were allowed to go on field trips outside the wire – and some men in the camps were allowed to work in nearby towns – nobody was really free to go. Reiko Komoto, whose family was sent to Topaz when she was nine years old, described the odd, partly free life after the demilitarization:

“In the beginning, guards with questionable intelligence manned the towers around the fenced camp. However, even if one could escape there was no place to go in the desert, in Utah, on foot, with an Asian face. Eventually, the guards were gone but no one tried to escape. A person could legitimately leave the camp if a person relocated to any place but the West Coast.”

Held By More Than A Fence 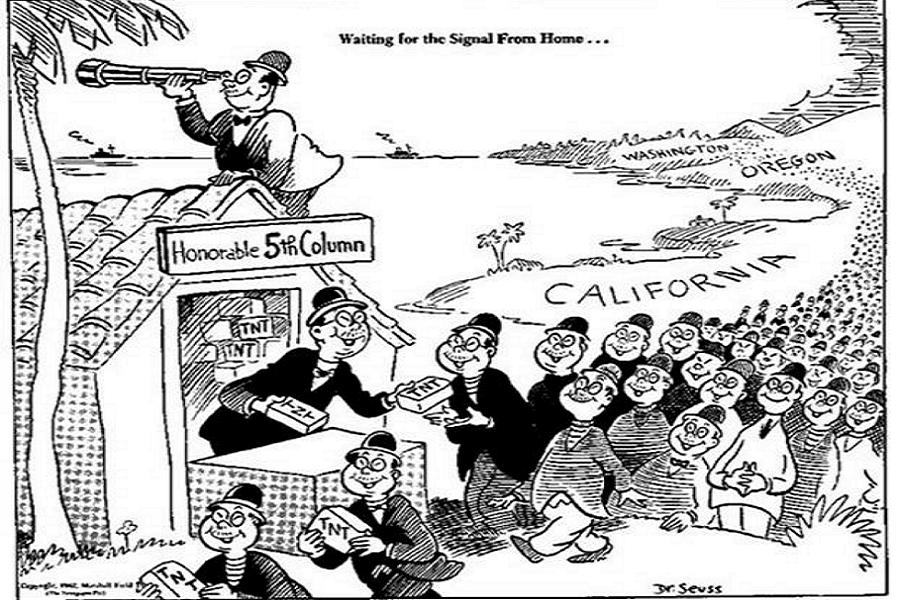 Ken Gilhooly/TwitterEven when the military discipline was loosened, internees were still trapped by the hatred of society at large. Even Dr. Seuss, then an illustrator for PM, published propaganda, such as this image depicting countless Japanese civilians collecting TNT and waiting for orders to attack.

Maybe it would have been nice to leave the camps and “relocate to any place but the West Coast,” but there was nowhere to go. Like the slaves of the Antebellum South, Japanese internees were trapped by more than a fence; there was no city or town where they could move in with family or find work.

The war was still on, and though many of the camp inmates had sons fighting for freedom in Europe, no American law protected their right to earn a living in Chicago or Detroit, even if they had had the means to move there. They were ultimately trapped by reality itself and could only wait until the government said they could go back to the towns they had left in 1942.

By the end of the war, the camps were more like dormitories than Dachau. The people inside them had nothing outside the wire, and it was necessary to house them until some kind of life could be salvaged back in the world. When it was announced that all U.S. citizens were going to be discharged straight back into society – with no money, prospects, or other support – people panicked.

Many actually renounced their citizenship just to stay in what had become their homes long enough to get their lives back on track. Courts later ruled that these renunciations were later ruled by the courts to have been made under duress, and so could be reversed at the former inmate’s request. 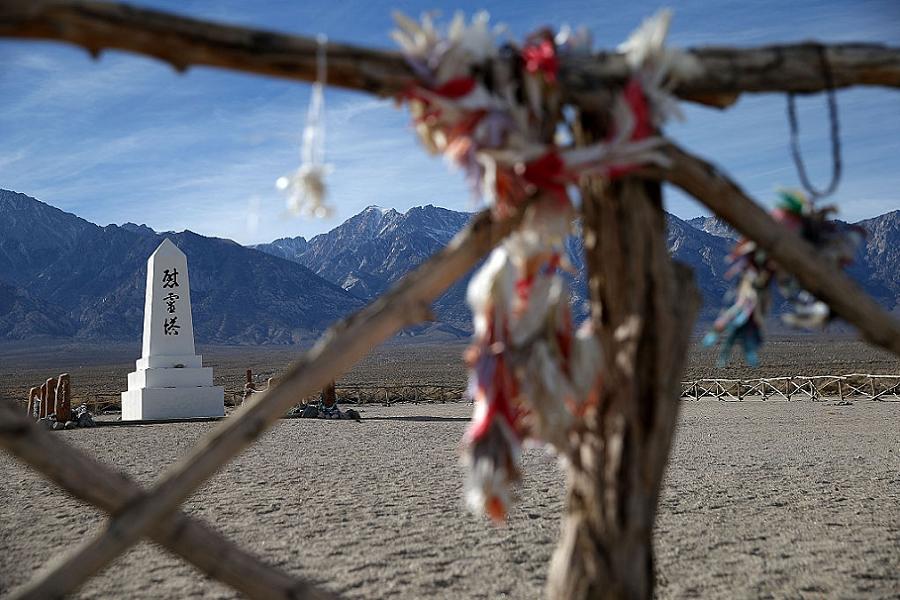 Those who didn’t renounce their citizenship for a brief extension of their stay were mostly hustled up in front of a loyalty board that rubber-stamped their freedom papers and sent them packing. Katsuma Mukaeda, the young man who had been arrested on Pearl Harbor Day, recalled the process:

“I spent four years and one month in internment. . . I was released from the Department of Justice after a hearing in December 1945. The release order came on February 11, 1946. In order to prepare and get the tickets for the train, I left there one week afterward. It was February 19 when I came to Los Angeles.”

Recently released inmates had nothing to fall back on. Their homes were gone, their businesses were sold for whatever they could get at the time, and they usually didn’t have much money. George Takei’s family returned to Los Angeles and went straight to Skid Row, where his father struggled to pick up the pieces of their lives. In time, between intact families and a strong sense of community and the value of work, most displaced Japanese-Americans recovered from their ordeal, even if their sense of security never returned.

In 1980, Congress opened an investigation into the military necessity and fundamental justice of internment. Three years later, the committee issued a report that acknowledged the responsibility of the government for the wrongs of the camps and recommended reparations for surviving victims.

In 1988, President Reagan signed legislation authorizing $1.2 billion in reparations, which was amended in 1992 with an additional $400 million for survivors. Perhaps more importantly, and almost certainly of more satisfaction to the former internees, in 2001 Congress took action to establish the 10 camp locations as historical landmarks and to preserve them as a warning of what frightened, angry people are capable of doing, even and especially in America.

Next, see what the Japanese-American internment camps looked like in these photos, and learn about the ways the time the U.S. intentionally exposed its own citizens to radiation.