Meet The Japanese Spider Crab, The ‘Daddy Long Legs Of The Sea’

With a leg span of 13 feet, the Japanese spider crab is the biggest crab in the world — and the stuff of nightmares in Japanese folklore.

The Japanese spider crab is a giant sea creature that lurks in the waters surrounding Japan. Gaming enthusiasts probably recognize this crustacean from the Animal Crossing: New Horizons video game while bold Japanese foodies might enjoy this crab on their dinner table.

The Japanese spider crab is thought to be the biggest crab in the world, with a leg span of up to 13 feet and an average weight of 40 pounds.

It is also likely the crab with the longest lifespan, living to be up to 100 years old. Perhaps even more impressive, the spider crab is one of the oldest living species on Earth, dating back about 100 million years.

The Prehistoric Origins Of The Japanese Spider Crab, The World’s Biggest Crab 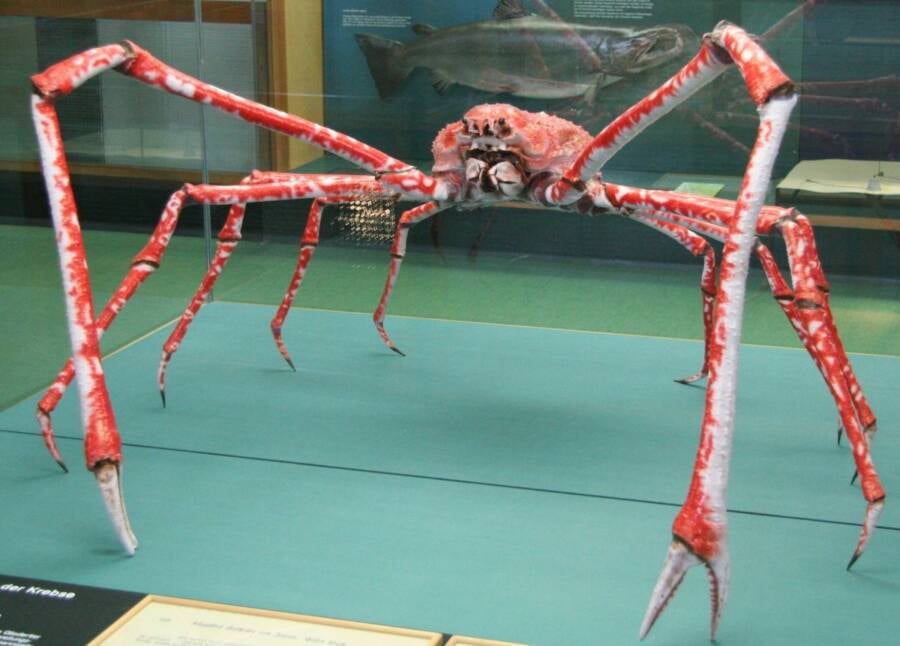 Wikimedia CommonsThe Japanese spider crab is the biggest crab in the world.

The Japanese spider crab’s presence commands attention with its bright orange hue and 10 lengthy limbs. Its legs — which are plentiful enough to lock an enemy in a powerful embrace — are indeed the sea creature’s most striking features.

The Japanese spider crab was first described by Western science in 1836 by Dutch zoologist Coenraad Jacob Temminck, who noted its impressive claws and ability to cause injury. Its scientific name, Machrocheira kaempferi, commemorates Engelbert Kaempfer, a German naturalist and physician who studied plants in Japan during the 17th century.

But the ancestry of spider crabs can be traced all the way back to prehistoric times. In 2013, researchers discovered the oldest known spider crab species in a fossil reef in northern Spain. 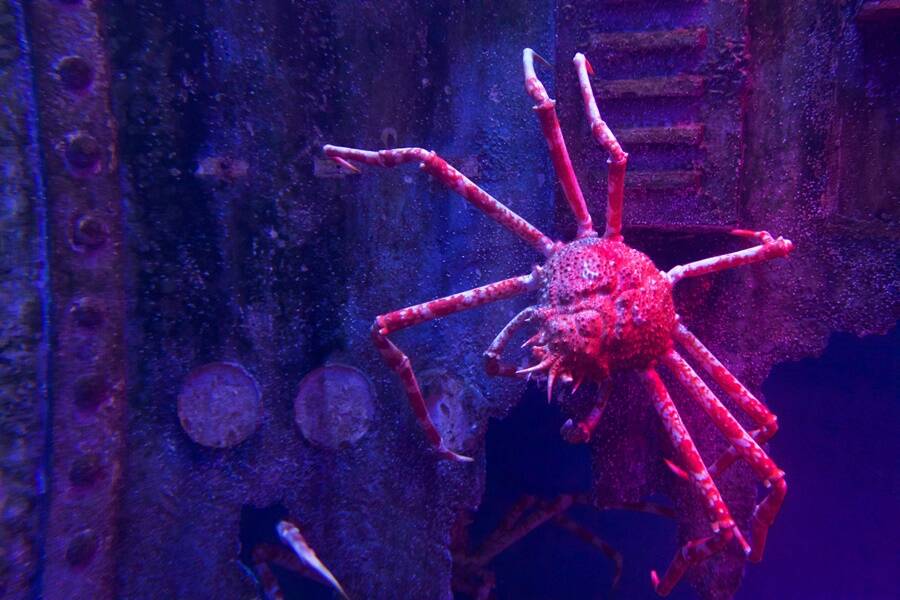 The ancient spider crab species was named Cretamaja granulata and lived 100 million years ago during the Cretaceous period. Unlike its giant descendants, the C. granulata was small, measuring less than an inch. Still, it exhibited physical characteristics that were distinct to spider crabs.

“The previous oldest one was from France and is some millions of years younger,” said study author Adiël Klompmaker. “This discovery in Spain is quite impressive and pushes back the origin of spider crabs as known from fossils.”

The Daddy Long Legs Of The Sea 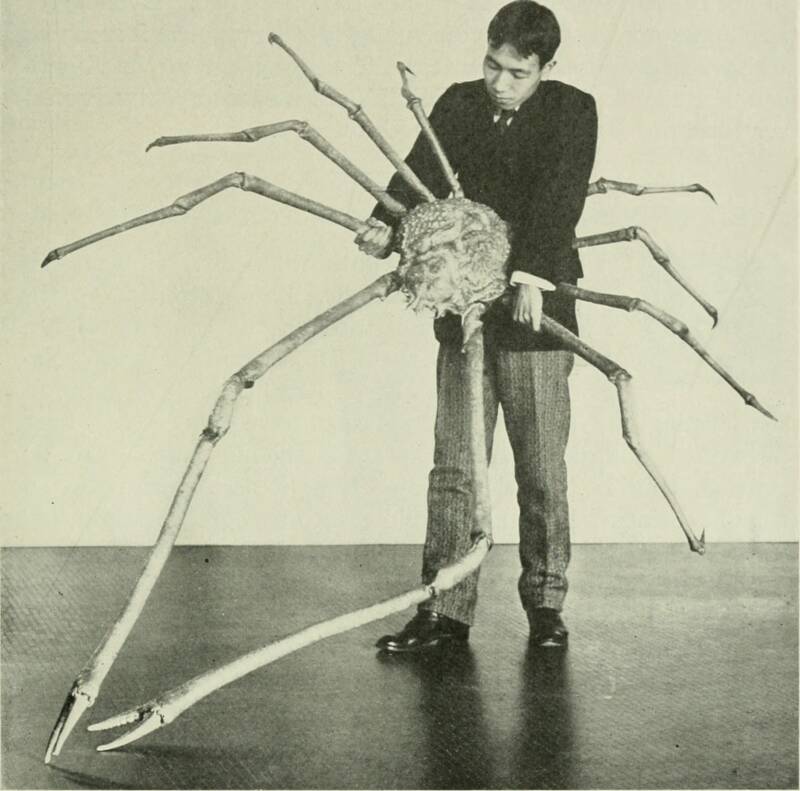 The Japanese spider crab’s limbs can grow up to 13 feet long, making the species the biggest arthropod in terms of length in the world.

However, the world’s largest crab loses its top rank when it comes to weight. While the giant spider crab can weigh 40 pounds, it’s still no match for the American lobster, which can easily tip the scales beyond that.

In 2009, the biggest Japanese spider crab in recent decades was caught. It was a male specimen with a 12-foot-long leg span and a weight of 44 pounds. The 40-year-old giant spider crab was fittingly named Crabzilla and displayed at the Scheveningen Sea Life center in The Hague, Netherlands.

It was later moved to the Sea Life in Paris Val d’Europe Aquarium in France, where visitors can still see the live giant firsthand.

The Japanese spider crab looks much more terrifying than it actually is.

The Japanese spider crab lives in the ocean off the coast of Japan. They can inhabit waters as deep as 1,000 feet, but they move to shallower depths to breed.

In its native Japan, the animal is simply known as taka-ashi-gani (“long legs”) or shinin-gani (“dead man’s crab”). The latter nickname comes from Japanese folklore, which describes the ocean animal as a sea-dwelling monster that preys on unsuspecting sailors or divers and drags them to their watery graves to feast on their decaying corpses.

It’s true that these crabs feed on dead bodies that they scavenge at the bottom of the sea… but they’re mostly dead sea specimens. The crustaceans also prey on clams, mussels, and other shellfish.

The Japanese Spider Crab Is Actually Quite Vulnerable

Despite its monstrous reputation, it’s actually a vulnerable animal. Its legs, though terrifyingly strong, are actually susceptible to breakage since they are so lanky. One study found that nearly 75 percent of all captured spider crabs that were surveyed were missing at least one limb.

These giant crustaceans become even more vulnerable as they mature. Like all crabs, a giant spider crab must molt off its old hard exoskeleton to accommodate its body’s growth. This molting is especially dangerous for them since the total process can take weeks to complete. It’s a complicated process and, if not done carefully, could end up killing the crab. 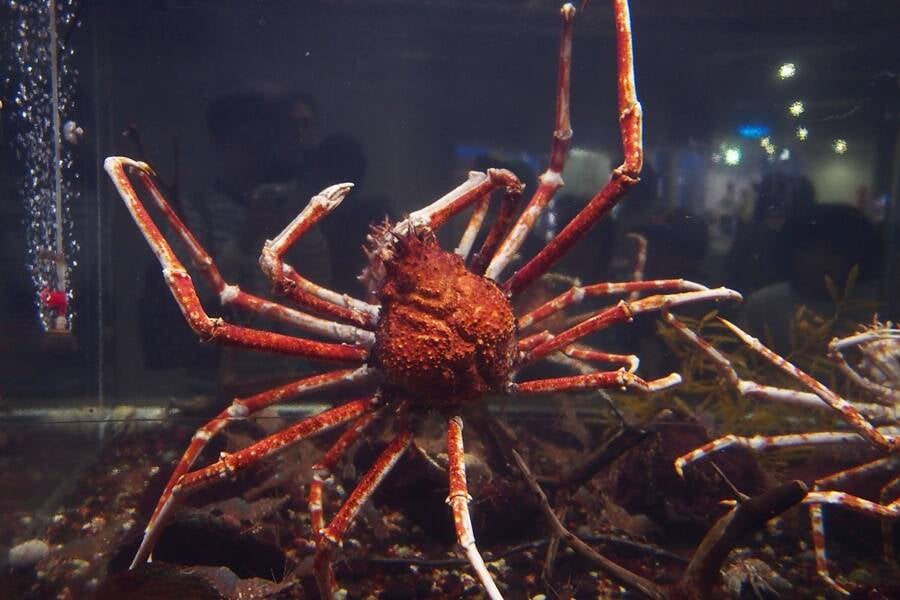 Wikimedia CommonsThe giant spider crab is most vulnerable during its molting period.

The spider crab could get stuck inside their old shell or get cannibalized by other crabs during their molting state. Japanese spider crabs in captivity are usually separated from other crabs while they’re molting — for their own safety — until their new shells have hardened.

In the wild, they protect themselves through camouflage using discarded shells, kelp, and anything else it can find on the floor of the sea. The bumpy exterior of its shell also helps to blend its giant frame into the seabed environment.

Mysterious Giants Of The Sea 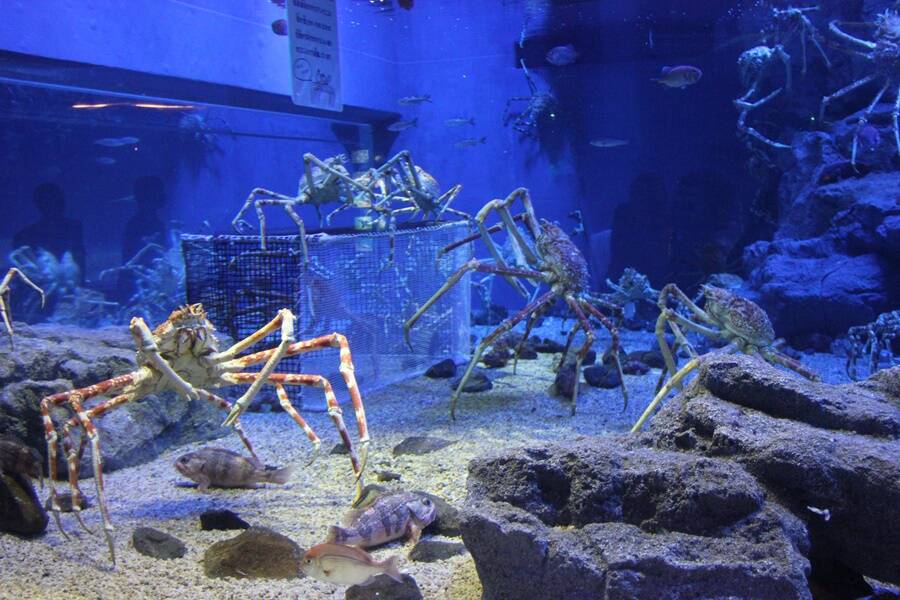 Wikimedia CommonsHarvesting the animal during its breeding season is prohibited in Japan.

There is still much that isn’t known about the species because they live so deep in the sea, making it difficult for experts to study them further.

But researchers have found that Japanese spider crabs are not a very sociable species. These crabs often scavenge for food alone and there is little communication between individuals, even between those kept together in captivity. In addition, experts found that these giant creatures are not overly aggressive despite their intimidating appearance, and can adapt pretty well to enclosed environments. 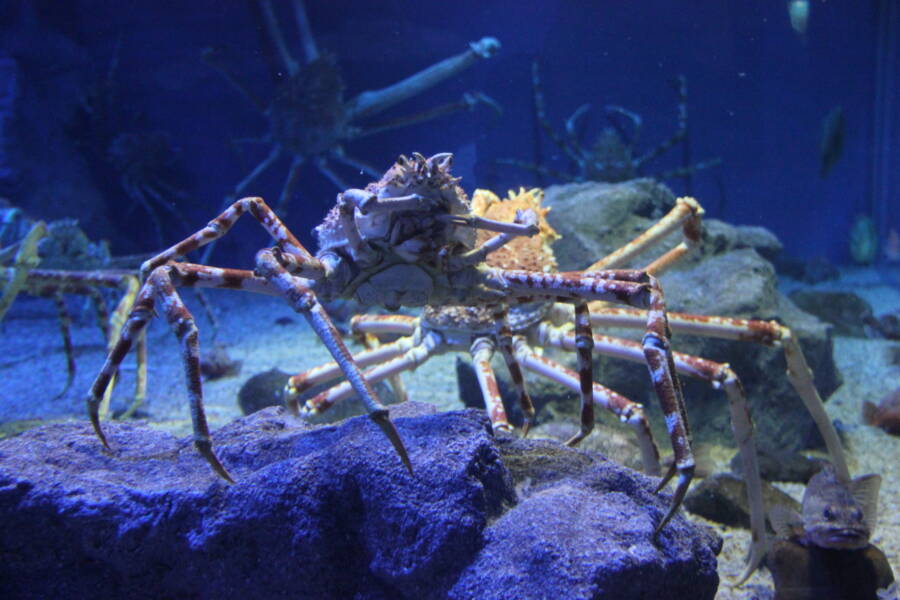 The giant spider crab is still considered a delicious delicacy in some parts of Japan, but the government has kept tight regulations on the harvesting of the species to protect it. Fishing for it is completely prohibited by the government during the animal’s mating season, which falls between January and April.

While their numbers are declining, they are not considered a vulnerable or endangered species. However, the Japanese spider crab’s conservation status has yet to be determined due to the difficulty in studying them in their natural habitat. That’s why it’s important to keep an eye on the well-being of these giants of the sea.

Now that you’ve learned all about the gargantuan Japanese spider crab, the biggest crab in the world, read about how harvesting horseshoe crab blood became a multimillion-dollar industry linked to human health. Then, read about the blue-ringed octopus, one of the world’s deadliest — and cutest — living creatures.