These rock-solid JFK assassination facts are more fascinating than any conspiracy theory ever could be. 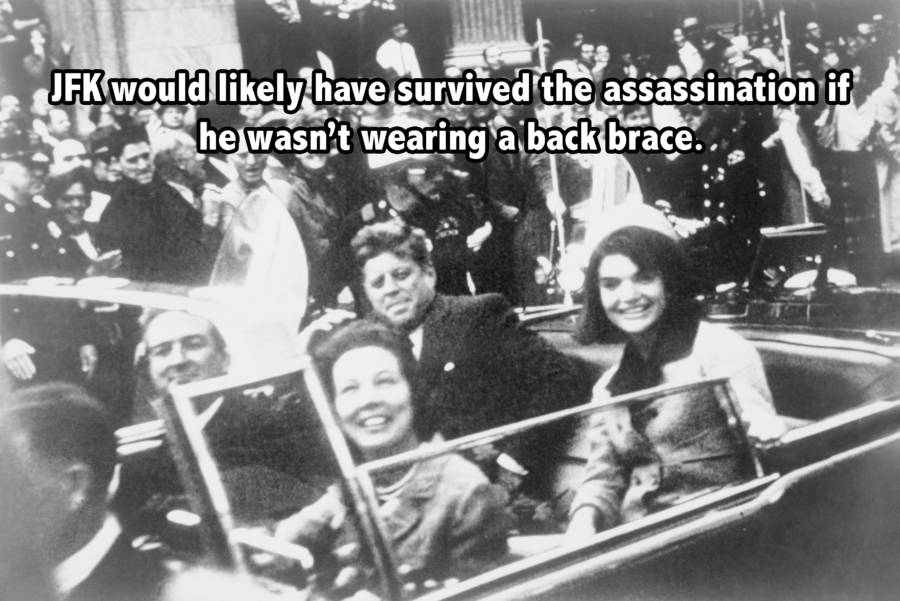 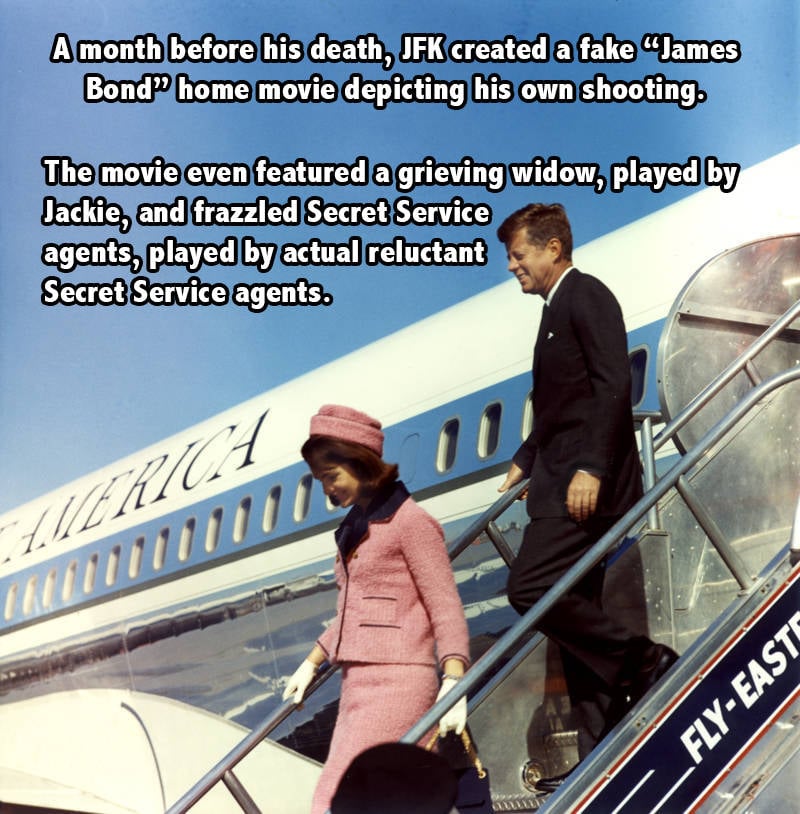 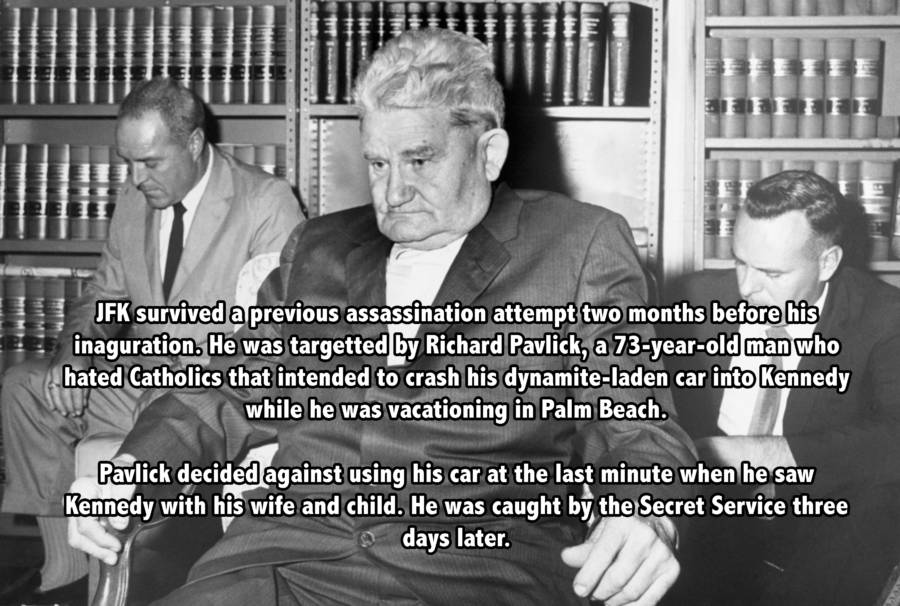 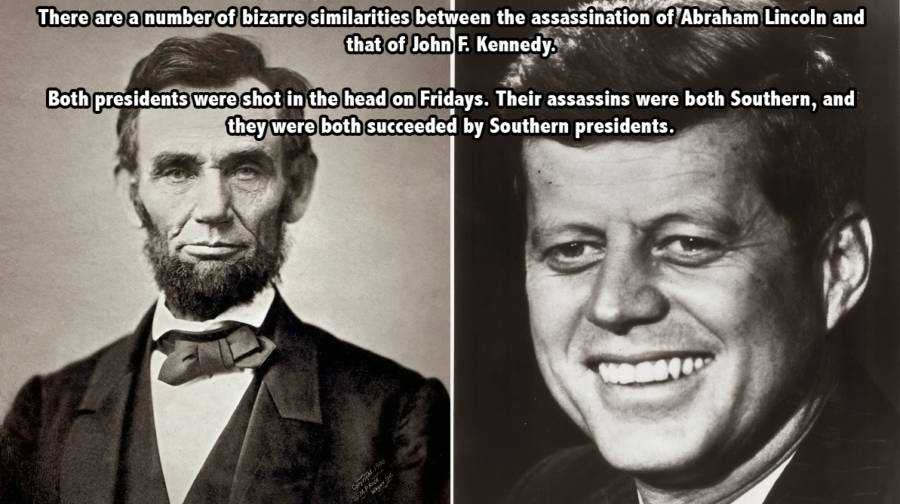 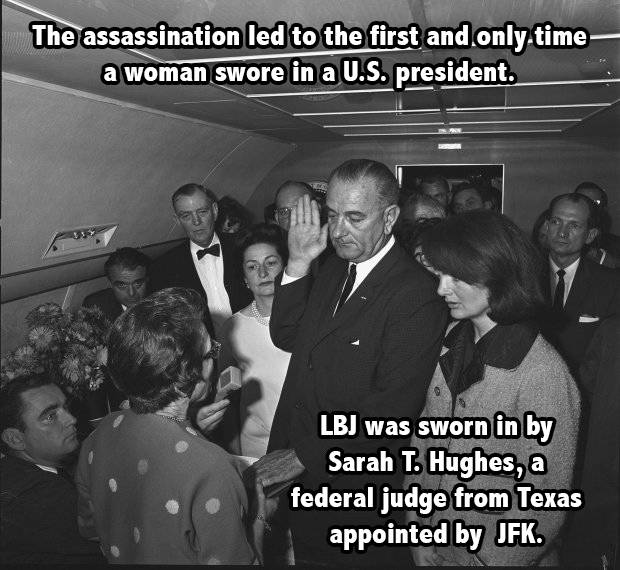 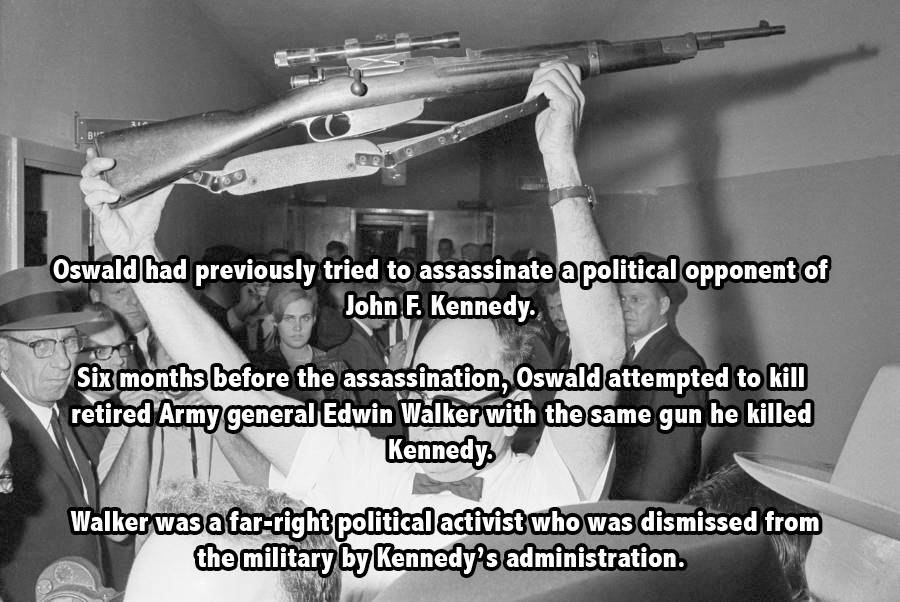 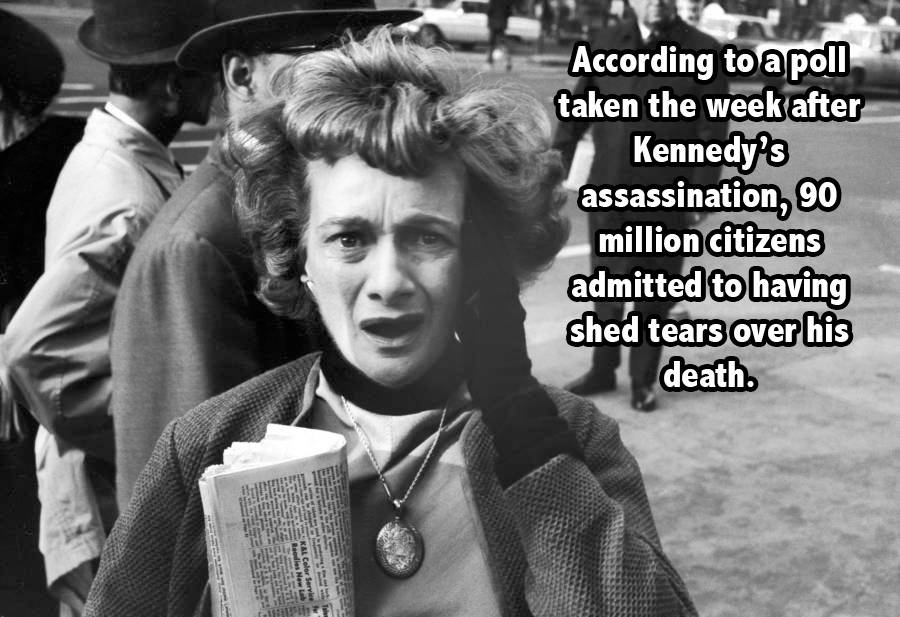 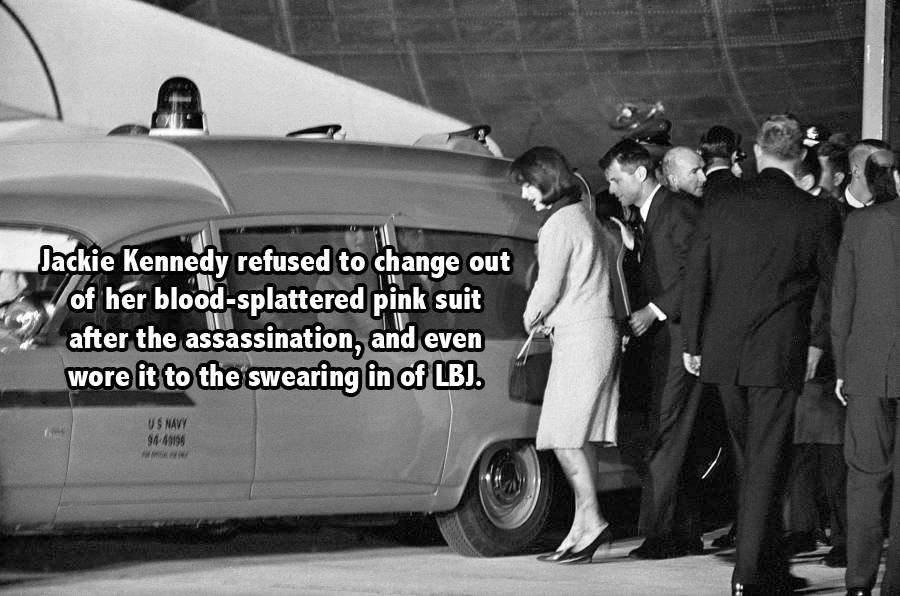 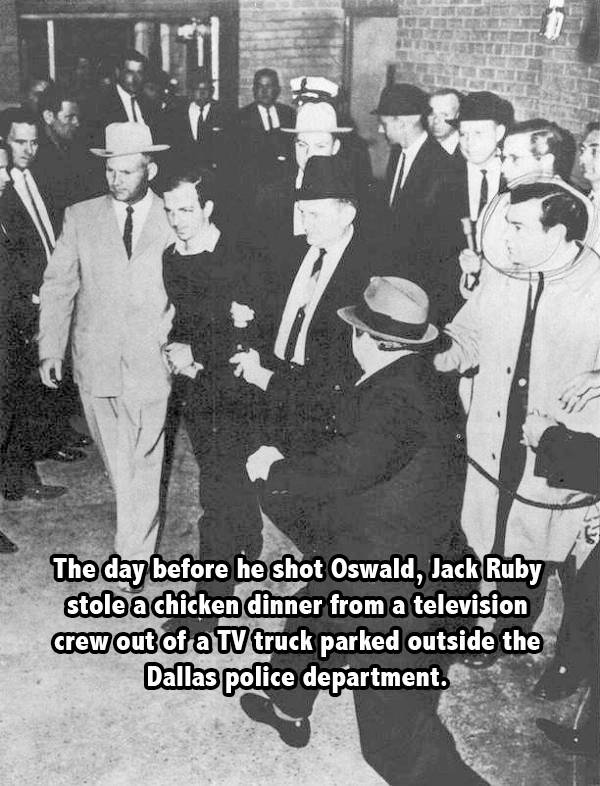 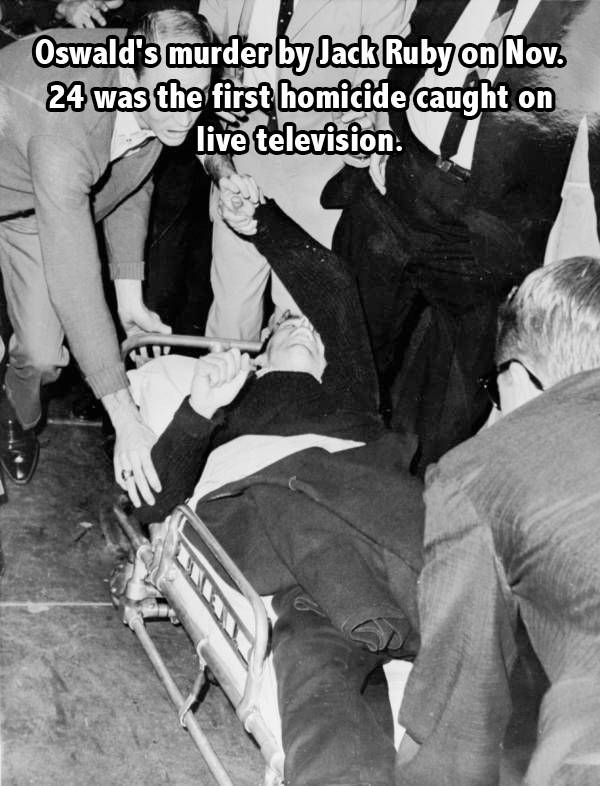 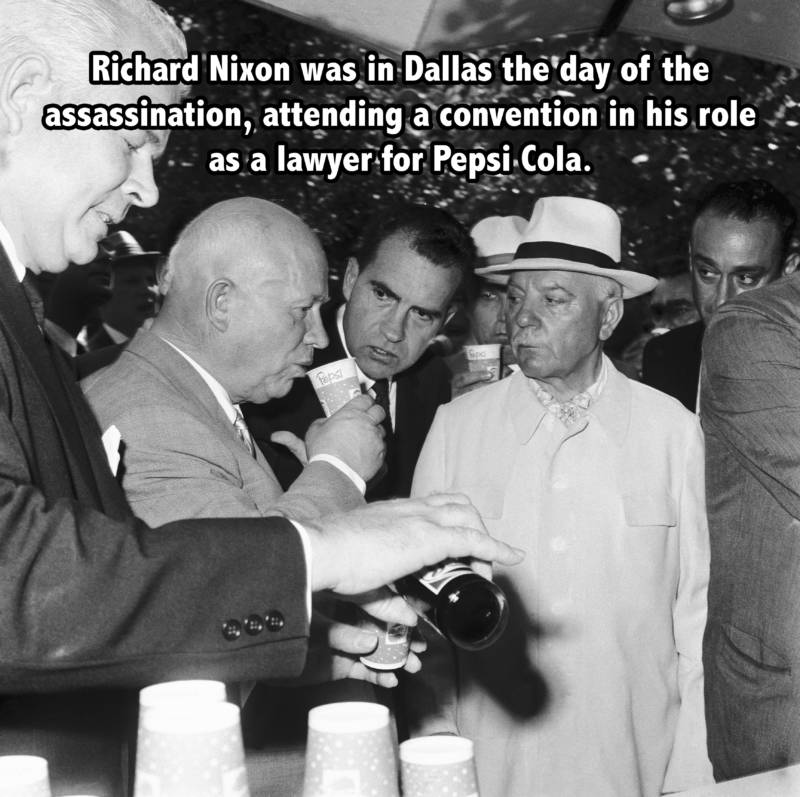 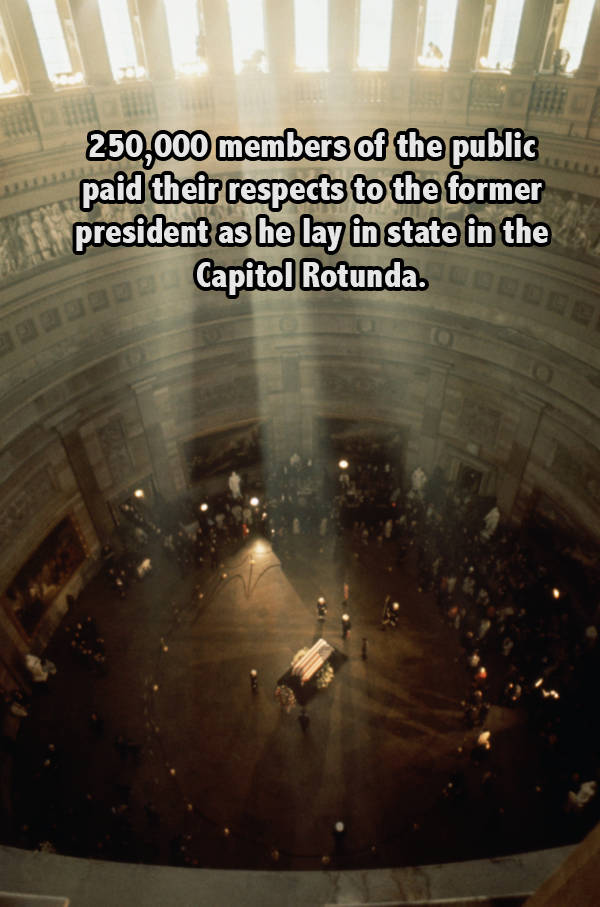 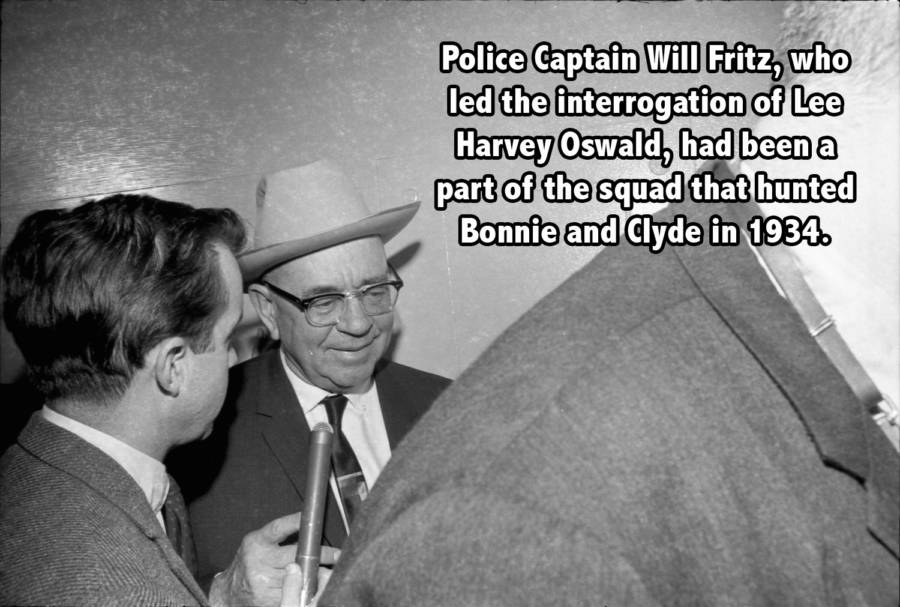 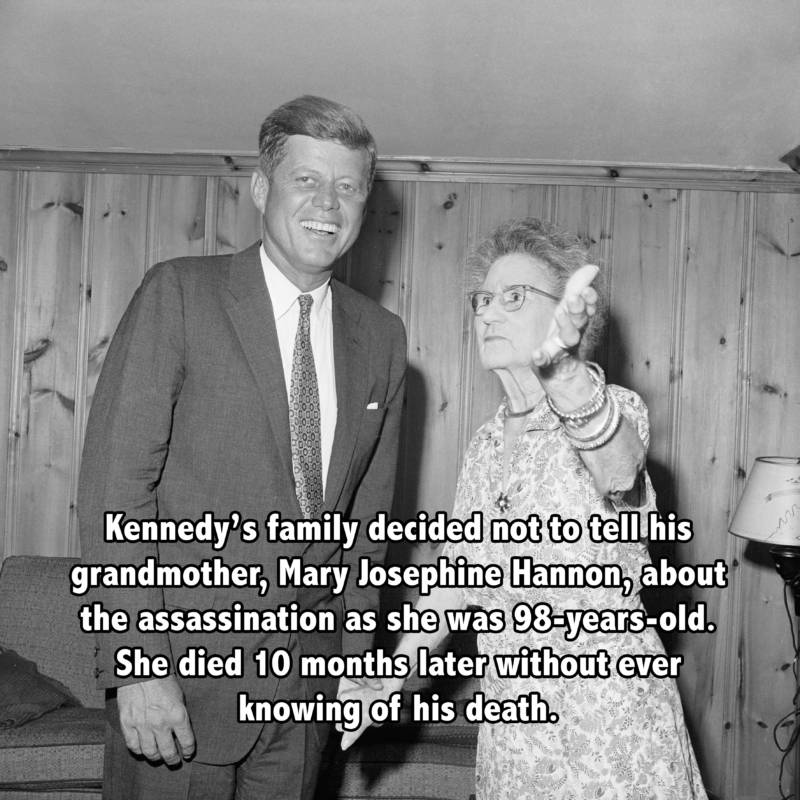 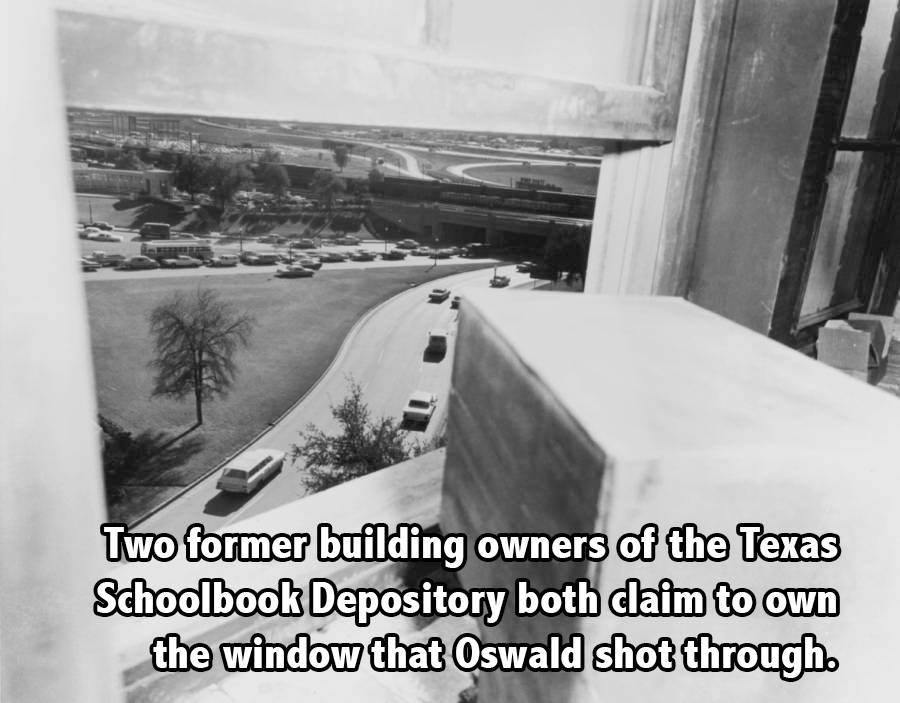 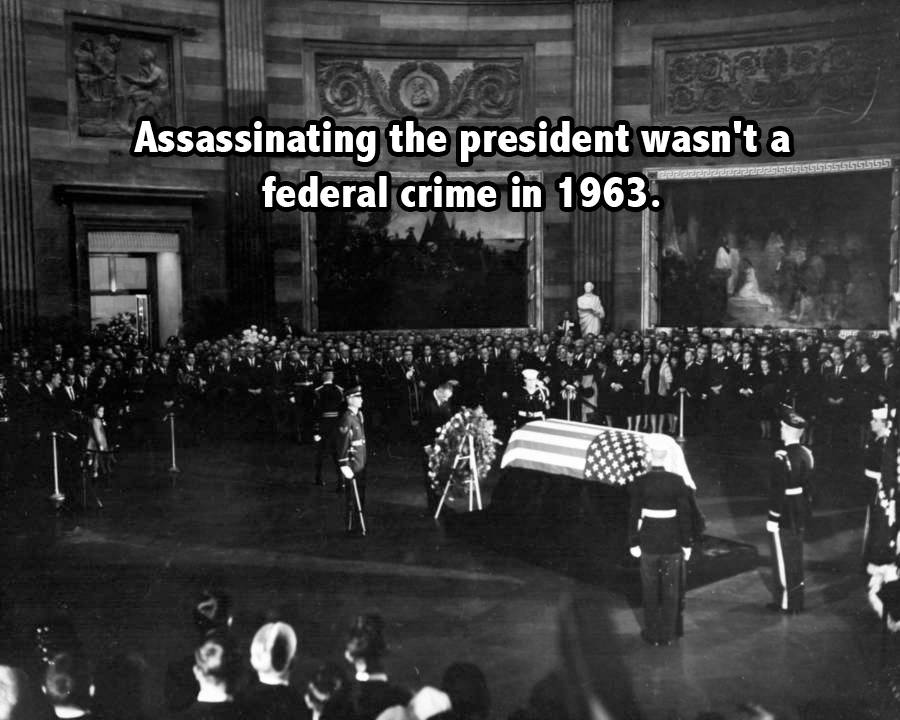 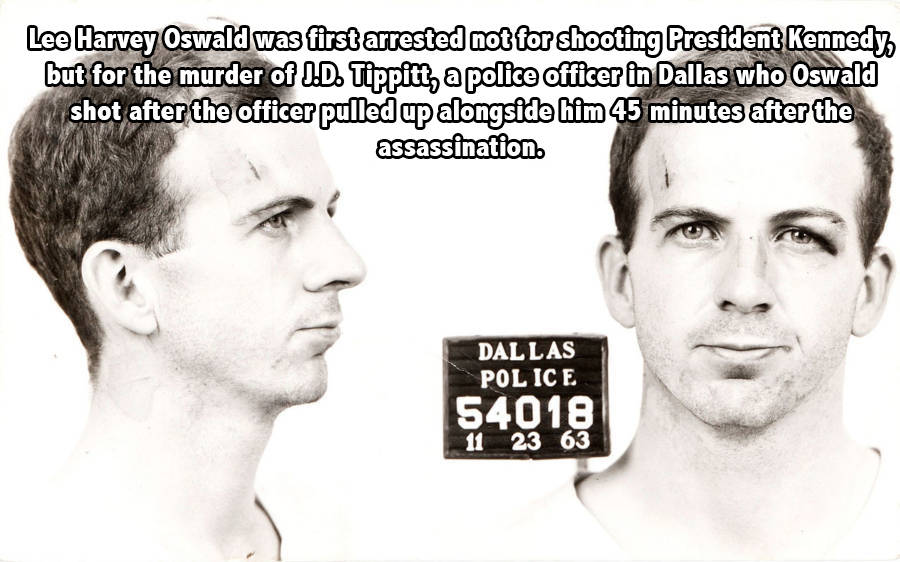 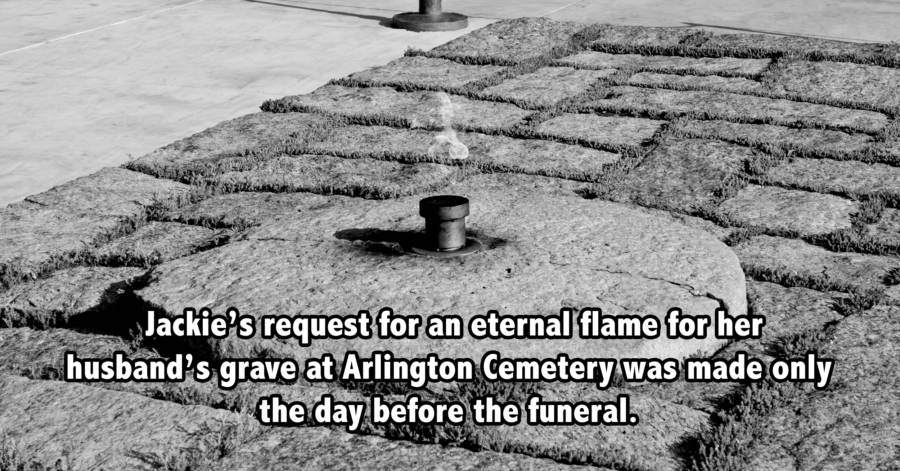 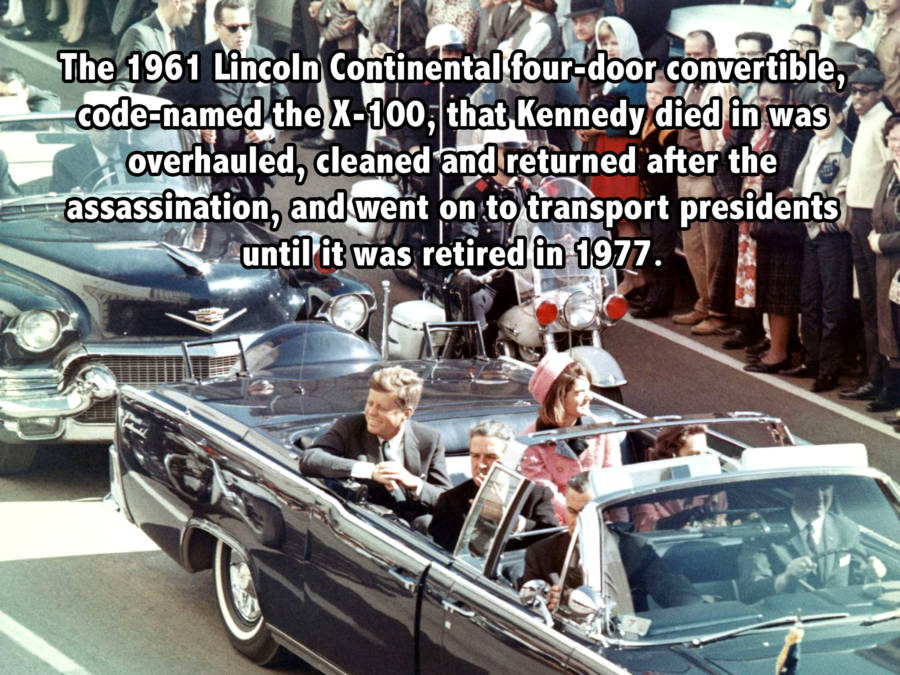 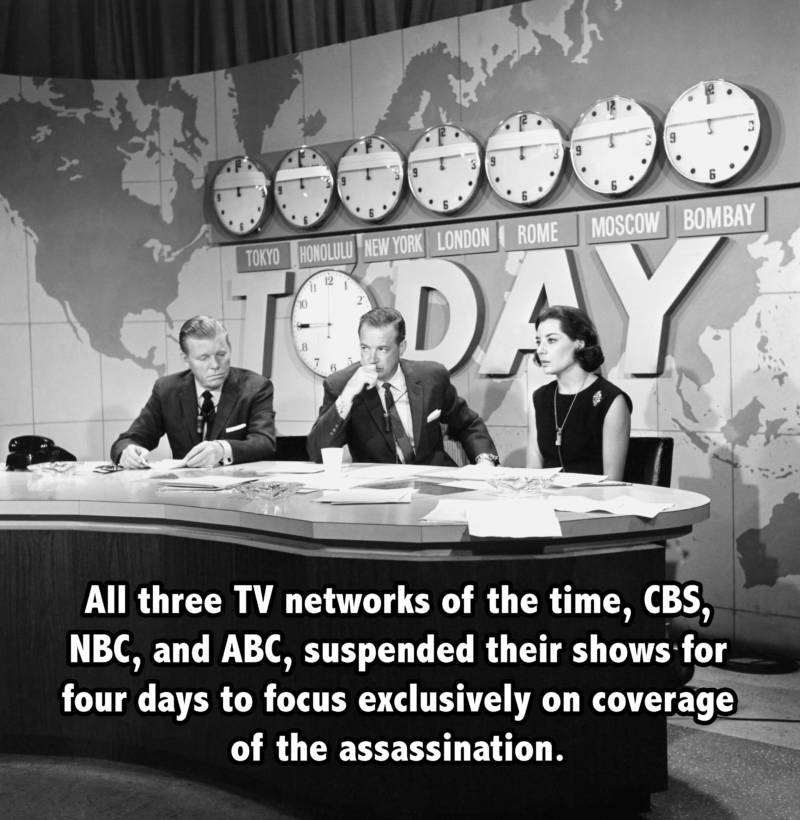 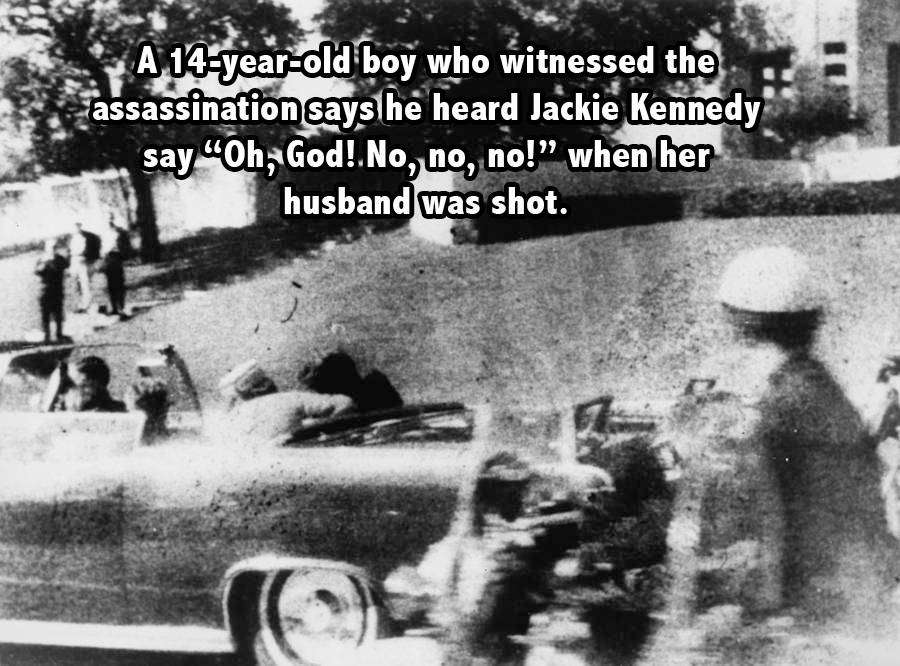 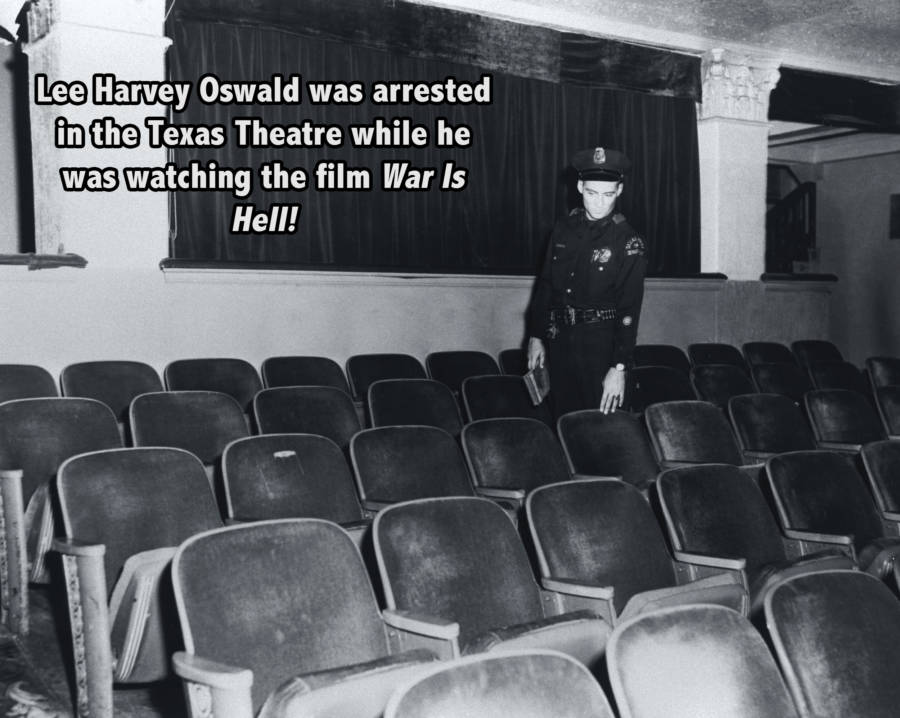 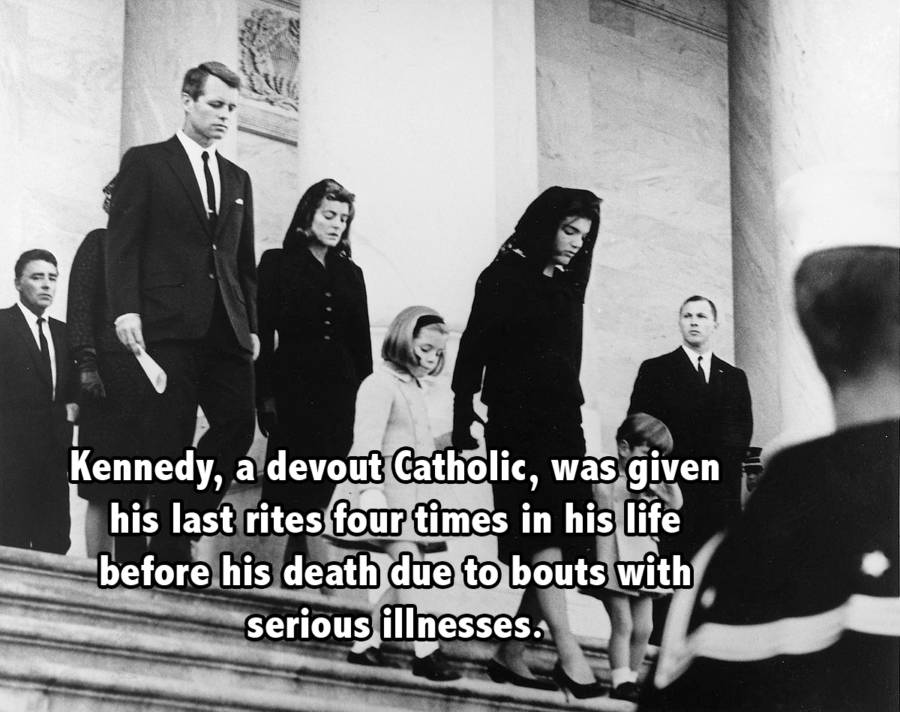 1 of 24
Kennedy would likely have survived the assassination if he wasn’t wearing a back brace.

The back brace, which he wore throughout his presidency due to his bad back, kept him in place after being shot the first time, letting the shooter get the second fatal shot to his head.Wikimedia Commons
2 of 24
A month before his death, Kennedy created a fake “James Bond” home movie depicting his own shooting.

The movie even featured a grieving widow, played by Jackie, and frazzled Secret Service agents, played by actual, reluctant Secret Service agents.Cecil W. Stoughton/National Archives and Records Administration
3 of 24
Kennedy survived a previous assassination attempt two months before his inauguration. He was targeted by Richard Pavlick, a 73-year-old man who hated Catholics and had intended to crash his dynamite-laden car into Kennedy while he was vacationing in Palm Beach.

Pavlick decided against using his car at the last minute when he saw Kennedy with his wife and child. He was caught by the Secret Service three days later.Bettmann/Getty Images
4 of 24
There are a number of bizarre similarities between the assassination of Abraham Lincoln and that of John F. Kennedy.

Lyndon B. Johnson was sworn in by Sarah T. Hughes, a federal judge from Texas who had been appointed by Kennedy.Wikimedia Commons
6 of 24
Oswald had previously tried to assassinate a political opponent of John F. Kennedy.

Six months before the assassination, Oswald attempted to kill retired Army general Edwin Walker with the same gun he used to killed Kennedy.

Walker was a far-right political activist who was dismissed from the military by Kennedy’s administration. Bettmann/Getty Images
7 of 24
According to a poll taken the week after Kennedy’s assassination, 90 million citizens admitted to having shed tears over his death.Stan Wayman/The LIFE Picture Collection/Getty Images
8 of 24
Jackie Kennedy refused to change out of her blood-splattered pink suit after the assassination, and even wore it to the swearing in of Lyndon Johnson.

When one of her aides asked if she wanted to change she said, "No, I'm going to leave these clothes on. I want them to see what they have done."AFP/Getty Images
9 of 24
The day before he shot Oswald, Jack Ruby stole a chicken dinner from a television crew out of a TV truck parked outside the Dallas Police Department.Ira Jefferson "Jack" Beers Jr./The Dallas Morning News/Wikimedia Commons
10 of 24
Oswald's murder by Jack Ruby on Nov. 24 was the first homicide caught on live television.Three Lions/Getty Images
11 of 24
Richard Nixon was in Dallas on the day of the assassination, attending a convention in his role as a lawyer for Pepsi Cola.Bettman/Getty Images
12 of 24
250,000 members of the public paid their respects to the former president as he lay in state in the Capitol Rotunda. Bettmann/Getty Images
13 of 24
Police Captain Will Fritz, who led the interrogation of Lee Harvey Oswald, had been a part of the squad that hunted Bonnie and Clyde in 1934.University of North Texas Libraries/The Portal to Texas History
14 of 24
Kennedy’s family decided not to tell his grandmother, Mary Josephine Hannon, about the assassination as she was 98-years-old. She died 10 months later without ever knowing of his death.

Kennedy was the first U.S. president to have a grandparent outlive them.Bettmann/Getty Images
15 of 24
Two former building owners of the Texas Schoolbook Depository both claim to own the window that Oswald shot through.

Both of them have sold the windows at auction, with one of them going for $3 million despite its disputed status.Hulton Archive/Getty Images
16 of 24
Assassinating the president wasn't a federal crime in 1963.

Up until legislation was passed in 1965, the murder or attempted murder of a president was a crime prosecuted under state law.National Archives and Records Administration
17 of 24
Lee Harvey Oswald was first arrested not for shooting President Kennedy, but for the murder of J.D. Tippitt, a police officer in Dallas who Oswald shot after the officer pulled up alongside him 45 minutes after the assassination.Dallas Police Department/Wikimedia Commons
18 of 24
Jackie’s request for an eternal flame for her husband’s grave at Arlington Cemetery was made only the day before the funeral.

This meant that the Army corp of engineers had to find a gas company to fit the pipes last minute. Rockville Suburban Propane, a small company, was chosen after the Army found them in the White Pages and an employee happened to pick up the phone in between other jobs.Tim Evanson/Wikimedia Commons
19 of 24
The 1961 Lincoln Continental four-door convertible (code-named the X-100) that Kennedy died in was overhauled, cleaned, and returned after the assassination, and went on to transport presidents until it was retired in 1977.Walt Cisco/Dallas Morning News/Wikimedia Commons
20 of 24
All three major TV networks of the time, CBS, NBC, and ABC, suspended their shows for four days to focus exclusively on coverage of the assassination.NBCU Photo Bank/Getty Images
21 of 24
A 14-year-old boy who witnessed the assassination says he heard Jackie Kennedy say “Oh, God! No, no, no!” when her husband was shot.Mary Ann Moorman/Wikimedia Commons
22 of 24
Lee Harvey Oswald was arrested in the nearby Texas Theatre while he was watching the film War Is Hell!Corbis/Getty Images
23 of 24
Kennedy, a devout Catholic, was given his last rites four times in his life before his death due to bouts with serious illnesses.Wikimedia Commons
24 of 24 With thousands of new documents related to the JFK assassination finally released to the public this week, many have realized just how much they don't know about this historic event.

On November 22, 1963, the course of U.S. history changed forever when John F. Kennedy was shot to death in Dallas, Texas by Lee Harvey Oswald (whose role in the assassination remains in dispute among amateur skeptics and conspiracy theorists).

Oswald was soon apprehended in a nearby theater, after shooting and killing police officer J.D. Tippet, who had rolled up alongside Oswald after seeing that he matched the description of the Kennedy shooter.

Then, Oswald himself was shot to death by a local nightclub owner and minor underworld figure named Jack Ruby before he could stand trial for Kennedy's murder. Ruby died of cancer in prison soon after, and with the major players now gone, much of the mystery behind the assassination may have died with them.

Despite, or perhaps because of, this, the assassination has remained one of the most hotly-debated points of interest among conspiracy theorists for decades, with many laying the blame for Kennedy's death on parties including Cuba, the CIA, the Mafia, and even then-Vice President Lyndon B. Johnson.

But while such speculation has held people's interest for decades, little of it is likely grounded in fact. Above are some of the most fascinating JFK assassination facts you'll ever read.

After having a look at these JFK assassination facts, see some of the most powerful Kennedy assassination photos you'll find anywhere. Then, read about the four strangest presidential assassination attempts of all time.