The Little-Known Story Of John Billington, The Mayflower Pilgrim Who Became The First Murderer In American History

Before committing his historic murder, John Billington was punished for a number of other offenses in Plymouth and became a social outcast — but scholars now think there might be more to his story.

In 1620, a ship carrying 102 people left England for the New World. It landed in Plymouth, Massachusetts in November, and its crew was fatally unprepared for what lay ahead.

During the first winter, half of the Pilgrims perished. The survivors slowly added to their numbers until 1630, when the colonists discovered a murderer in their midst: John Billington. 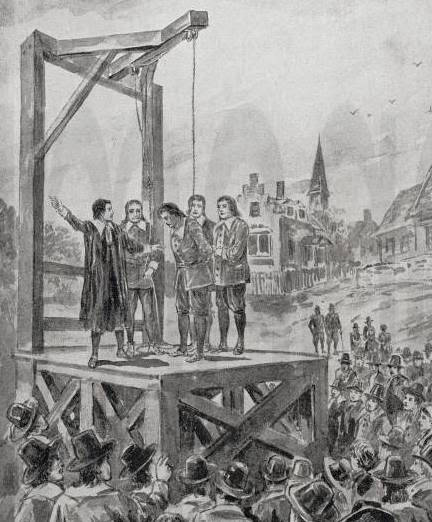 Getty ImagesA depiction of John Billington, who is considered the first murderer in American history, being hung.

Billington had come over on the Mayflower with his wife and two sons but had earned a reputation as a troublemaker. And in 1630, he shot another colonist. The crime made John Billington the first English settler to kill another English settler in the New World and also earned him the name “the Mayflower Murderer.”

But historians now wonder whether Billington’s actions weren’t motivated by his status in his colony — and whether he might have been, ironically, a victim of religious persecution. 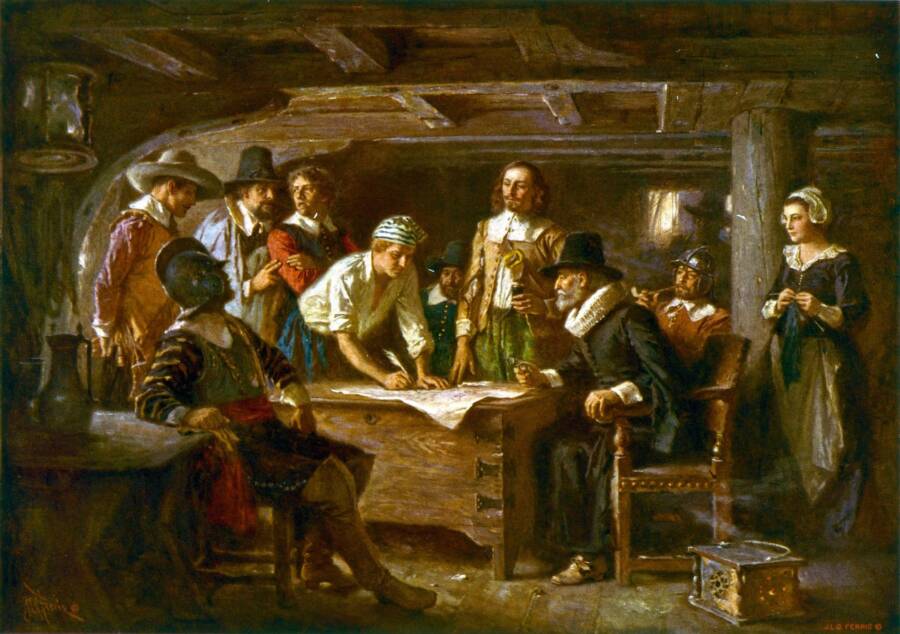 Jean Leon Gerome Ferris/Library of CongressIn 1620, the Pilgrims and “the strangers” signed the Mayflower Compact, which set the new colony on a path toward self-governance.

Born in 1580, John Billington was already in his 40s when he set sail on the Mayflower. Harkening from Lincolnshire, Billington did not number himself among the Pilgrims seeking religious freedom in the new world.

In fact, of the 102 passengers on the ship, only 37 claimed to be fleeing persecution. The other passengers, called “strangers” by the Pilgrims, were simply seeking a better life. John Billington was among them.

The Mayflower planned to land in Virginia, where the Pilgrims could set up their own government and the “strangers” could join the colony at Jamestown. But the ship landed in Massachusetts, a mistake that would cost many of them their lives in the first season.

From the beginning, Billington earned a reputation as a troublemaker. At the end of the 10-week sea voyage, Billington participated in a mutiny attempt. As Plymouth governor William Bradford described it, “several strangers made discontented and mutinous speeches.”

Additionally, Billington’s son Francis nearly sank the ship when he shot off a musket and nearly struck a powder keg. The explosion would have surely destroyed the Mayflower. 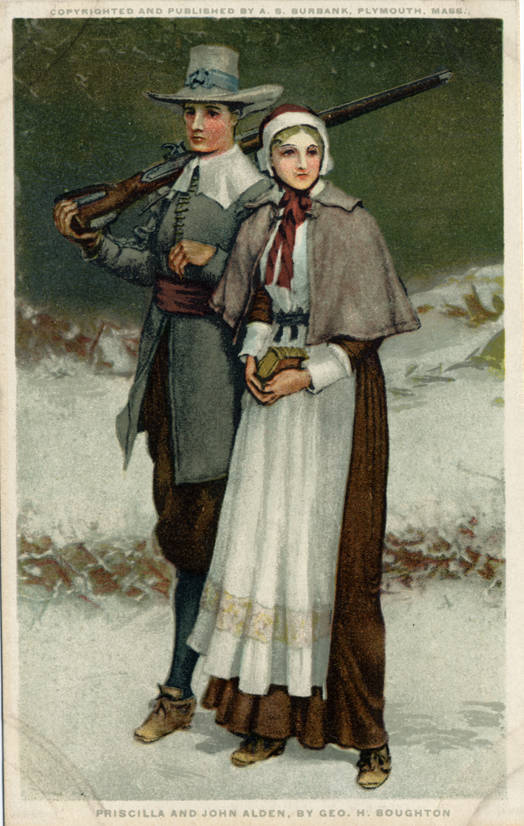 The family’s troublemaking reputation only grew stronger in Plymouth Colony. The “strangers” didn’t want to live under Pilgrim rules, but the Pilgrims quickly wrote the Mayflower Compact to call order.

The document established rules for the already struggling colony, including a declaration that the colonists should create “laws, ordinances, acts, constitutions, and offices.”

John Billington scrawled his name on the Mayflower Compact on Nov. 11, 1620, in a show of good faith. But then, in March 1621, John Billington refused to perform military duty at the colony. He was held in “contempt of the Captain’s lawful command” and tied by his neck and heels for punishment.

Pilgrims described his act of insubordination as “the first offense since arrival” and made Billington the first to commit a crime in Plymouth Colony. 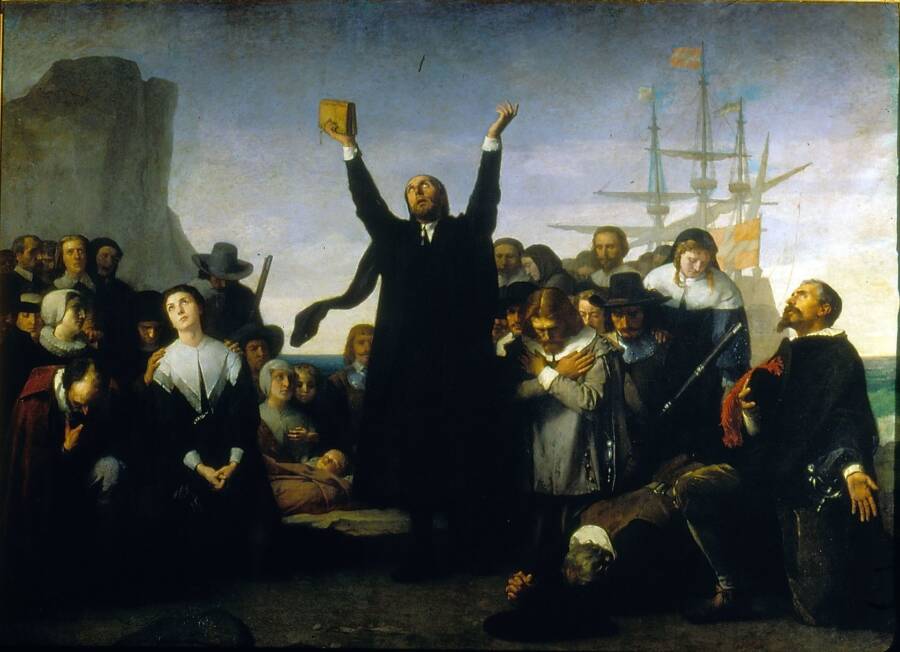 Antonio Gisbert/Wikimedia CommonsThe Pilgrims leaving the Old World for the New World in 1620.

A few years later, in 1624, the Pilgrims expelled two men from the colony for criticizing strict religious policies. Billington apparently fed information to the men, though he denied it as soon as the governor caught wind of the scheme.

William Bradford, Plymouth Colony’s governor, complained to Deacon Robert Cushman back in England, “He is a knave, and so will live and die.”

But Billington’s worst crime was yet to come.

In 1630, John Billington reportedly got into a row with John Newcomen, another member of the colony. William Bradford, who chronicled the early decades of the colony, described it as a “former quarrel,” which then led to Billington arriving on Newcomen’s field with a gun.

Bradford claimed that upon seeing him, Newcomen ran from his “mortal enemy,” but not far enough before Billington shot and killed him.

“When the world was first peopled, and but one family to do that, there was yet too many to live peaceably together,” wrote William Hubbard, one of the first graduates from Harvard, of the crime. “So when this wilderness began first to be peopled by the English, when there was but one poor town, another Cain was found therein, who maliciously slew his neighbor in the field.”

Billington expected to escape without punishment, but as Hubbard explained, “justice otherwise determined.”

Billington Was The First Pilgrim To Be Sentenced To Hanging 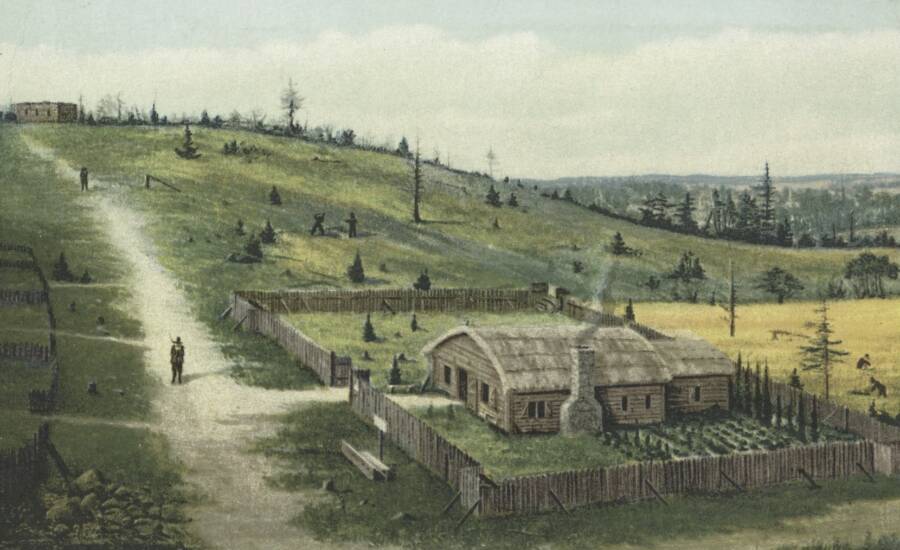 Bradford recorded the trial of John Billington, during which a jury found Billington guilty of “willful murder by plain and notorious evidence.”

For the crime of murder, Plymouth Colony sentenced Billington to death by hanging.

“This as it was the first execution amongst them,” Bradford related, “so was it a matter of great sadness unto them.”

The colonists turned to the leader of the neighboring Massachusetts Bay Colony for advice, John Winthrop, who said Billington “ought to die, and the land be purged from blood.”

Hubbard declared that Billington, “the first murderer of his neighbor,” received “the deserved punishment of death, for a warning to others.” 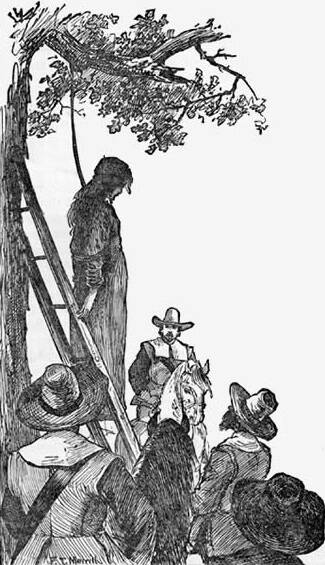 But modern historians see the ordeal differently. Because Billington was “a stranger,” he was excluded from some Plymouth affairs, including holding public office and was given the smallest tract of land in the colony.

John Billington’s descendants also take a different stance. The Billington family “were not in sympathy with the aims and tenants of the Plymouth church,” according to the Society of Mayflower Descendants. As one of the “strangers,” Billington never signed up to live under Pilgrim rule, at least until he signed the Mayflower Compact.

His descendants argue that John Billington “stoutly supported individual independence and freedom of speech, raising the voice of opposition when he disagreed with the rule of government.” However, he did murder another colonist in cold blood.

And although the colony executed Billington to warn others not to kill and to “purge” their ranks of evil, he would be only the first murderer in a New World.