How John Denver Died In A Tragic Plane Crash

After losing control of the experimental aircraft he was piloting, John Denver died when the plane crashed into Monterey Bay on October 12, 1997.

For some two decades before John Denver’s death, he took folk music to new heights with his idyllic lyrics, soaring vocals, and acoustic guitar playing. His unique, spiritual sound invited audiences to see the world in all its natural splendor just as he did. 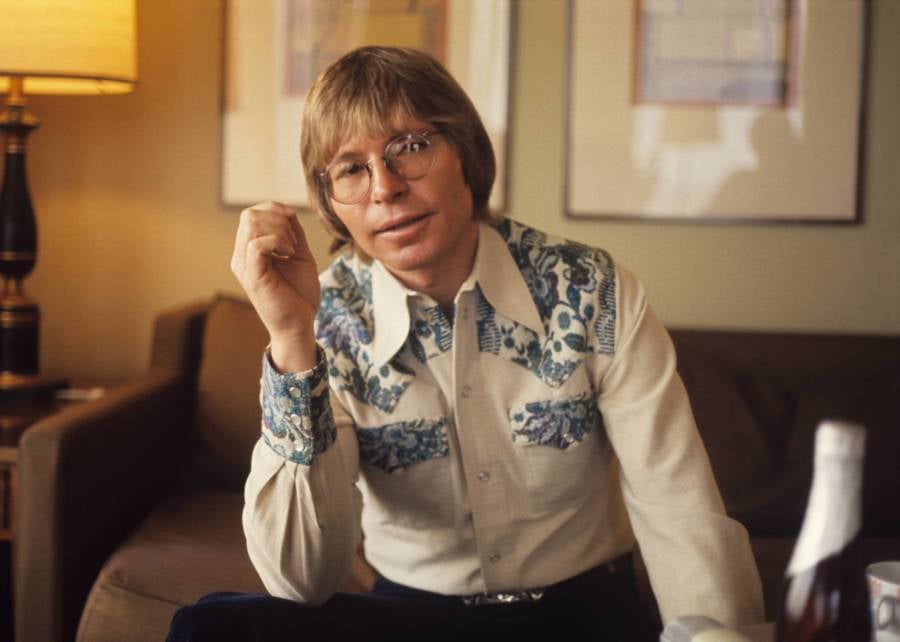 Gijsbert Hanekroot/RedfernsJohn Denver poses for a portrait in his hotel room in 1979 in Amsterdam, Netherlands.

But John Denver’s death would bring a startling and tragic end to his story when an experimental plane he was flying crashed into the Pacific Ocean on October 12, 1997. But ever since then, holes in the story have left many wondering what caused John Denver’s death. We know that there was a harrowing midair accident, but certain facts about John Denver’s plane crash leave the story partially mysterious to this day.

John Denver was born Henry John Deutschendorf Jr. on December 31, 1943, in Roswell, New Mexico. At age 11, Denver received a 1910 Gibson acoustic guitar from his grandmother as a gift, which provided him inspiration throughout his singing-songwriting career.

His father was a U.S. Air Force Officer another aspect of Denver’s early life that would follow him into adulthood. He developed a love of flying. Unfortunately, this would contribute later to John Denver’s death. 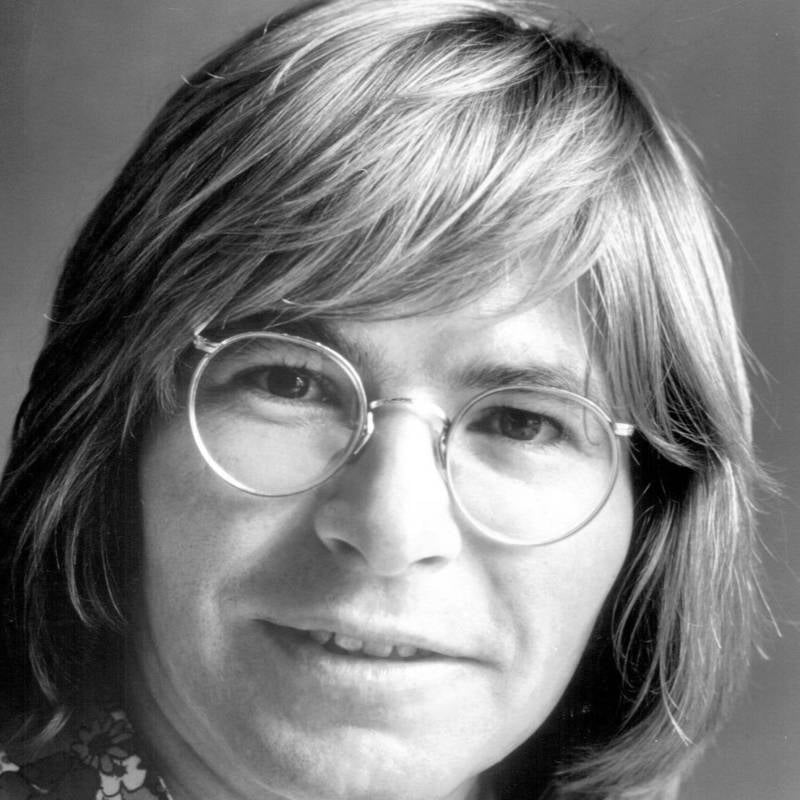 Denver attended Texas Tech University (then known as Texas Technical College) from 1961 to 1964, but his musical wanderings led him to drop out of college and head to New York City in 1965. He won a spot against 250 other auditioners on the Chad Mitchell Trio before catching his big break in 1967.

The folk group Peter, Paul and Mary recorded a song Denver had written, “Leaving on a Jet Plane.” The tune was a hit, which skyrocketed Denver’s appeal to music industry executives.

Studios loved his wholesome image, and recording execs convinced the singer to change his last name for better brand recognition. Denver was enamored with the Rocky Mountains, where his family had settled. Besides borrowing the name, Denver was inspired by the natural environment there to write his greatest hits.

His “Rocky Mountain High” would become the state song of Colorado.

A live performance of ‘Rocky Mountain High’ from 1995.

Denver’s popularity grew to where he was playing before sold-out stadiums across the United States.

Meanwhile, Denver used his music and fame to take a stand for environmental and humanitarian causes. Groups he championed included the National Space Institute, the Cousteau Society, Save the Children Foundation, and Friends of the Earth. 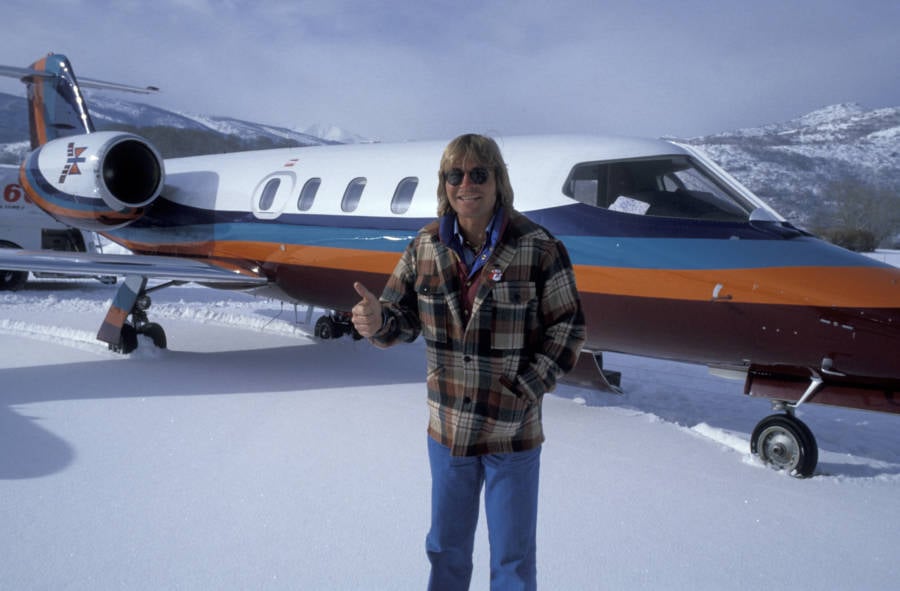 Ron Galella, Ltd./WireImageJohn Denver on December 11, 1977 at the Aspen Airport in Aspen, Colorado.

In 1976, Denver used his financial clout to co-create the Windstar Foundation, a wildlife preservation nonprofit agency. He also founded the World Hunger Project in 1977. Presidents Jimmy Carter and Ronald Reagan both honored Denver with awards for his humanitarian causes.

How Did John Denver Die And What Caused His Plane Crash?

John Denver was also a talented pilot. He loved to be in the air, alone, to commune with the sky.

Tragically, his love of flying helps explain the answer to the question of how John Denver died in 1997 at the age of 53. 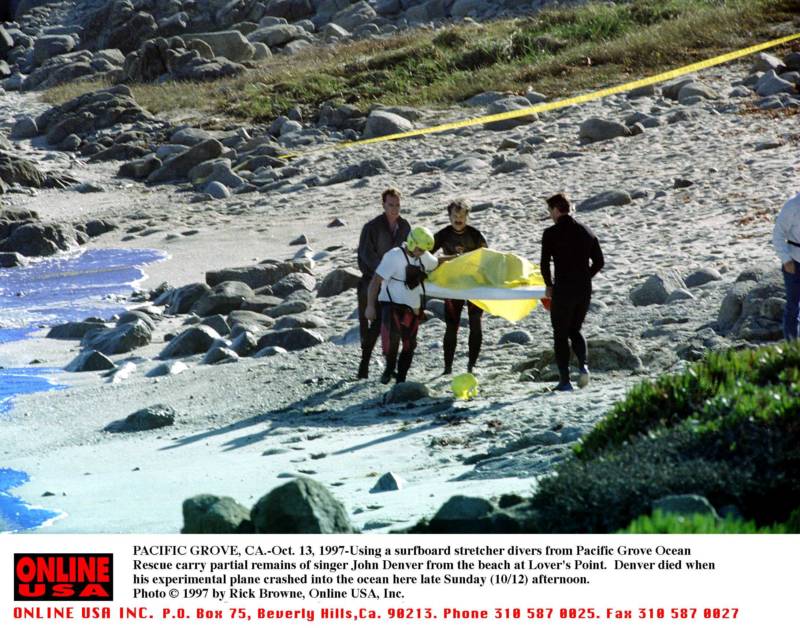 The story of John Denver’s plane crash begins on October 12, 1997, when he took off from Monterey Peninsula Airport, a small regional airport serving the Monterey, California area. He performed three touch-and-go landings before heading out over the Pacific Ocean. However, Denver was flying illegally, as he did not have a pilot’s license at this time.

Also, around the time of his death, the type of plane he was flying was responsible for 61 accidents, 19 of which were fatal.

At 5:28 PM, as many as a dozen witnesses saw Denver’s experimental Adrian Davis Long EZ (which he owned) take a nose-dive into the ocean.

John Denver’s death was instantaneous. But there’s more to the question of how did John Denver die.

The NTSB determined that poor placement of a fuel selector valve diverted Denver’s attention from flying. They speculated that John Denver crashed his plane when he accidentally steered it into a nosedive because he couldn’t reach the handle.

The valve selector switches the fuel intake to the engine from one tank to another so the plane can keep flying without refueling.

Investigators determined later that, even before the flight, Denver knew that handle was trouble. The designer of the plane told him that he would fix the fuel valve selector design flaw before the end of his next tour. The singer never got that chance.

Investigators also figured out that Denver didn’t refuel the plane before taking off. If he had refueled the main tank, he wouldn’t have had to hit the valve to switch fuel tanks in mid-flight. Denver didn’t file a flight plan, but he told a mechanic he didn’t need to add fuel because he would be in the air for only an hour.

But some pilots don’t believe that this strange valve placement would be enough for Denver to steer himself into a nosedive. Here’s where Denver’s death gets darker for some. “To get the nose down like that, you have to be real purposeful,” recreational pilot and father of the ill-fated plane’s designer, George Rutan claimed.

But those who knew Denver don’t believe he would have made himself crash.

Regardless of the cause of John Denver’s plane crash, it would take investigators all evening following his accident to find all of his major body parts in about 25 feet of ocean — including his head.

The Legacy Of John Denver’s Death — And His Music

John Denver’s death could not dim his legacy, which continues more than 20 years later. 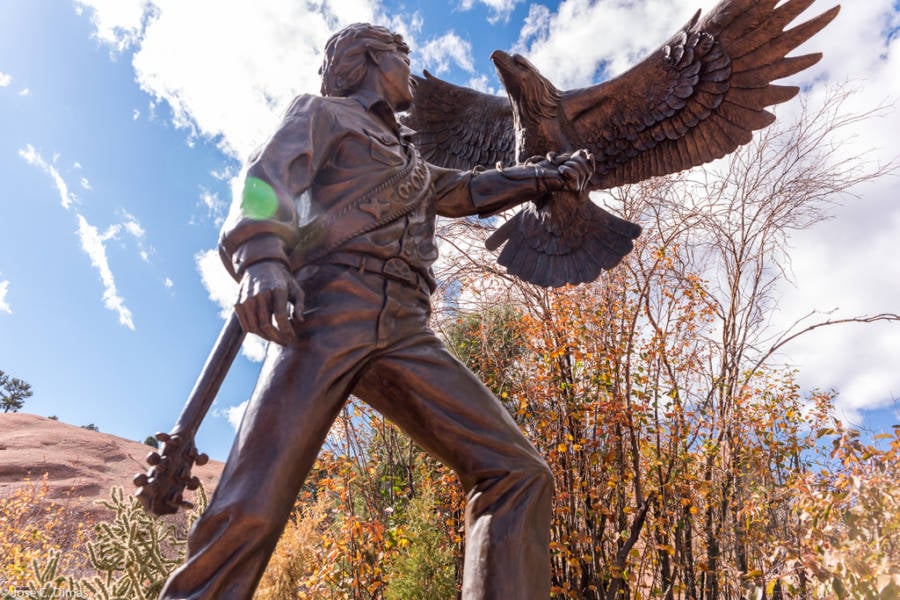 A bronze statue in his honor graces the grounds of Red Rocks Amphitheater outside of Denver, Colorado, home to the Colorado Music Hall of Fame. The statue stands 15 feet tall, and it depicts the conservation activist welcoming a gigantic eagle onto his arm with a guitar strapped to his back. It’s a perfect tribute from Denver’s adoptive home state.

In October of 2014, Denver received a star on the Hollywood Walk of Fame. Two of Denver’s three children, Jesse Belle Denver and Zachary Deutschendorf, were on hand for the star’s premiere unveiling. The placement of the star coincided with the debut of an exhibition in Hollywood called “Sweet Sweet Life: The Photographic Works of John Denver.”

Every October, the city of Aspen spends one week paying tribute to Denver’s legacy. A six-day John Denver Celebration occurs in the middle of the month, usually near the anniversary of his death. Attendees hear tribute bands, listen to live radio broadcasts of Denver’s folk music, and tour the area that the singer once called home.

After this look at John Denver’s death and the answer to the question of how John Denver died, delve deeper into American folk music with this archive of photos from the Lomax Family. Then, if you’re into the blues, check out these vintage images that showcase the birth of the blues.