Johnny Cash And The Infamous 1968 Performance ‘At Folsom Prison’

Johnny Cash's 'At Folsom Prison' is undoubtedly the most significant prison album ever recorded. Here's how the guy who shot a man in Reno found his way to Folsom.

Johnny Cash’s performance at California’s Folsom Prison has been immortalized as the stuff of legends, both through the success of its recorded album and by its depiction on the silver screen by Joaquin Phoenix. At the time, though, Cash was on his way out — making this a make-or-break moment in his waning career. 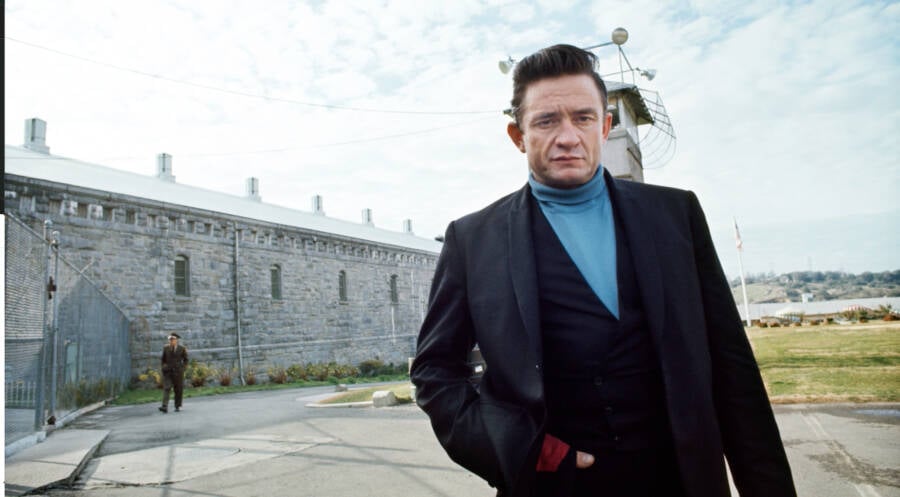 Jim Marshall ArchiveOne of Johnny Cash’s band members forgot he was carrying a gun into Folsom, while another forgot he had hash on him. Fortunately neither of them got in trouble.

Before recording the January 13, 1968 performance, the “Man in Black” had ruined his relationship with the press, the law, and his fans. From career-damaging headlines about his drug-smuggling pills across the Mexico border, an affair with June Carter that left a portion of fans upset, and an increasing hatred of reporters, Cash was on a downturn.

It didn’t help matters that he hadn’t had a No. 1 hit in years.

According to History, newspapers despised the 35-year-old country singer by this point. Fortunately for him, this empathetic gamble of choosing to play for felons and making a record out of it pulled Cash out of the depths of looming irrelevance.

At Folsom Prison became a No. 1 hit on Billboard’s pop and country charts the following year, firmly cemented Cash as an icon of “cool,” and introduced the singer’s talent to a whole new audience. According to Johnny Cash at Folsom Prison documentary director Bestor Cram, the timing couldn’t have been more synchronicity-laden.

“He was desperate to change his own relationship to his audience,” Cram told The Washington Post, “to find himself amongst all the demons he was fighting on a very personal level, which also kind of represented the stress that the nation was enduring.”

Cash symbolized the anger and aimlessness, frustration and rage that so many Americans felt at the time — during the chaos of assassinations, Vietnam, and civil rights movement — with an audience of penitentiary prisoners being an ingenious method of highlighting that unspoken theme.

The road to Folsom, however, was riddled with problems, controversy, and proverbial potholes that nearly hindered Johnny Cash from getting back on track.

The Road To Folsom

It was Reverend Floyd Gressett who put forth the idea of Cash meeting prisoners. As one of his closest friends, the minister counseled state inmates and asked the singer if he’d be interested in talking to some of these cast out men.

“John had a real feeling for the down and out, for the prisoners,” Tennessee Three member Marshall Grant told Rolling Stone. “For anybody like that. He came from very humble beginnings in Arkansas.”

“So even though he acquired a lot of things in life, he still felt for these people and he made it very obvious, too. He was so real with it. And that’s what brought him to prisons. And a lot of them turned their lives around because of our willingness to go entertain them that told them that we cared.” 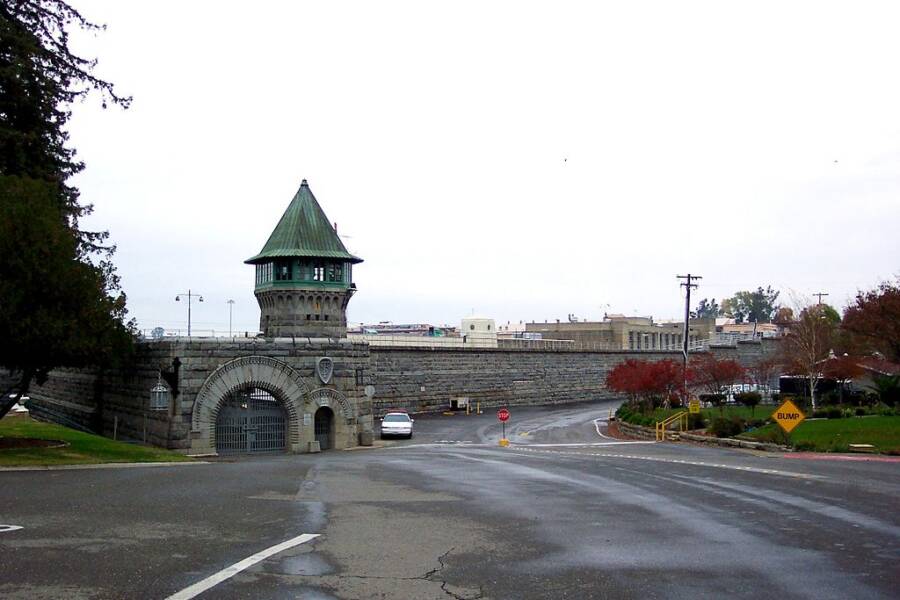 It may come as a surprise to most that the legendary At Folsom Prison wasn’t Cash’s first time performing there. Reverend Gressett placed the notion of connecting with these prisoners in Cash’s head years earlier.

The singer became intrigued, wrote “Folsom Prison Blues” in 1953, and performed the song there in November 1966 — two whole years before recording the famous album at the titular prison.

Two years later, of course, he returned to record the album. Nonetheless, Cash had been so uninspired and drug-addled throughout the mid-1960s that the process of getting him to record something wasn’t easy — to say the least.

“This was a way to get something out of him to release, because we couldn’t get him in the studio,” said Grant. “And when we got him in the studio, he’d come completely unprepared…So it came up through conversation, ‘Let’s do an album at Folsom Prison.'”

Columbia Records was hesitant to pay for the recordings and required plenty of convincing to finally relent. The album would be compiled from two live tapings — one in the morning and one in the afternoon.

The whole gang — Cash, his band, their entourage, and girlfriend June Carter — settled in the local El Rancho motel that night to prepare. Then-governor Ronald Reagan was in town for a fundraiser and decided to drop by for a casual hangout. 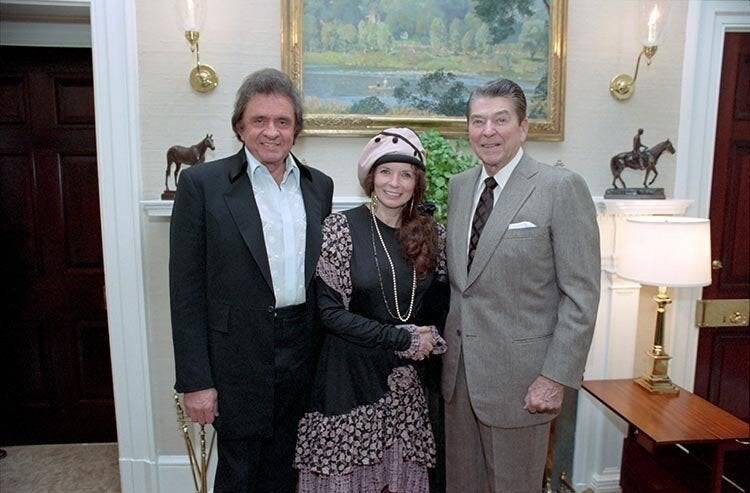 TwitterGovernor Reagan dropped in for a chat the night before Johnny Cash performed at Folsom Prison. They’d meet again, years later, when the former became President (as pictured here).

That night, Gressett played his famous friend a song called “Greystone Chapel.” It was written by a Folsom Prison convict named Glen Sherley, and revolved around finding God in the prison’s chapel.

Cash loved it so much that he wrote down the lyrics and burned the midnight oil to rehearse the song with this band.

He promised to play the song as part of his set the next day — without Sherley’s knowledge.

“When we got to Folsom, it was so quiet and so desolate and you could only see a few prisoners around,” said Grant. “Jim Marshall took pictures of John and June on the bus and of them getting off of the bus and we were all in there and it was a rolling jail cell.”

“And so even from the time we left the little motel, which was two or three miles away, it was a very somber atmosphere for everybody. It was hard to explain. There was just no joy there.”

Grant accidentally carried a gun into prison. It was a real pistol that Cash and co. would use as a gag on stage — they’d pull the trigger and a loud bang would jolt the audience into laughter, as smoke wafted out of the barrel. That morning, of course, it didn’t occur to him that he was walking into a maximum-security prison with a handgun.

Fortunately, he calmly told the guards about and made sure to say, “I don’t want any problem,” which led to a peaceable confiscation until the show was over. Jim Marshall, arguably the most prolific and important photographer in rock & roll, forgot about the clumps of hash in his camera bag. Thankfully, nobody was the wiser.

The stage was set up right behind death row, in the cafeteria. Author Robert Hillburn was freelancing for The Los Angeles Times and was fortunate enough to be there that day. The writer had a palpable sense that everything had fit in place — that this was exactly what Cash was supposed to do.

“He really felt that he had made the right decision that he had something that audience wanted,” said Hillburn of Cash. “He didn’t just do a greatest-hits show that day; he designed every song for that audience and their emotional needs.”

Hillburn described the scene as vibrant and wild, a combination of nervous tension and sheer desire on behalf of the inmates to let loose.

“There were guards walking around with guns on ramps above the audience,” he said. “It was tense.”

Marshall, meanwhile, couldn’t help but notice how Cash had the prisoners in the palm of his hands for the entire duration of the show.

“If Johnny would have said, ‘Come on, let’s crash out of here right now,’ they would have done it,” he said. “They’d have followed him. He had that presence.” 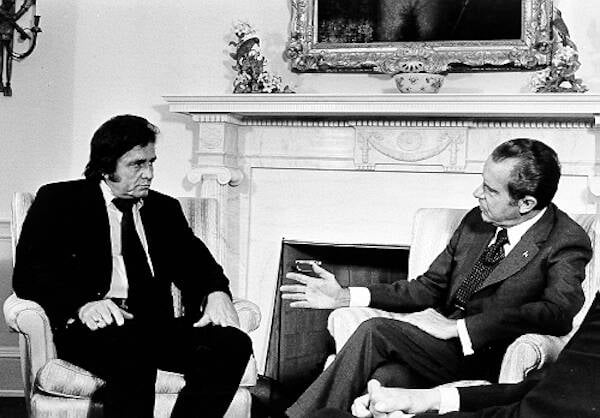 Wikimedia CommonsJohnny Cash was so vehemently in favor of fundamental prison reform that he met with President Nixon to discuss policy. July 1972.

The show had turned a room full of criminals into a hot, sweaty party full of smoke, whooping, and endorphins. Everyone was well behaved, but visibly overjoyed. Many of the prisoners likely had one of the best days of their lives that day.

Before the show officially wrapped, though, Cash announced that he had one more song to play — written by Glen Sherley.

“He jumped out of his chair,” said Gene Beley, a Ventura Star-Free Press reporter in attendance. “I thought his eyes were going to bolt out of his head. I don’t think I’ve ever seen a happier man alive.”

At Folsom Prison changed Sherley’s life. Seeing Johnny Cash perform his song on stage and receive his proper credit in front of his fellow inmates seemed to give him a boost of confidence thereafter. He recorded an album in prison, and when he was released, Cash welcomed him into the band.

Unfortunately, Sherley was fired when he threatened to kill one of his bandmates. He killed himself a few years later. Johnny Cash paid for the funeral.

The Legacy Of The Man In Black

Even though Johnny Cash had never spent more than a few nights in jail (mainly in the drunk tank), his “Folsom Prison Blues” became a rallying cry for prisoners across the country — one that ingratiated the singer to those behind bars. His image, too, was that of an outlaw who always sided with the underdog.

But this was more than just an act — Cash was profusely sympathetic to the plight of incarcerated Americans. He particularly disliked that first-time offenders were treated just as harshly as career criminals, not to mention how ineffective the supposed rehabilitation of U.S. prisons really was.

A KPIX CBS SF Bay Area segment on the 50th anniversary of the performance.

“He thought the prison system was broken, because it wasn’t fixing anybody,” said friend and family historian Mark Stielper. “The population was mixed, kids and killers. This was his thing; he was really bothered by that.”

Ultimately, the show wasn’t just a universally praised performance that turned out a hit record. Cash also “made mainstream society aware of the need for prison reform,” said Michael Streissguth, author of Johnny Cash: The Biography. “There was nobody at his level of prominence who was doing the same thing.”

“Even today, when we listen to Johnny Cash, we know of him as a friend of the prisoner,” said Cram. “He continues to move the needle as we question how our society continues to lock people up.”

After learning about Johnny Cash and his performance at Folsom Prison, read about the rock and roll groupies who changed music history. Then, take a look at 36 Johnny Cash photos that show the Man in Black in action.