Joseph Bonanno: The Mafia Boss Who Led A Family Before Retiring To Write A Book 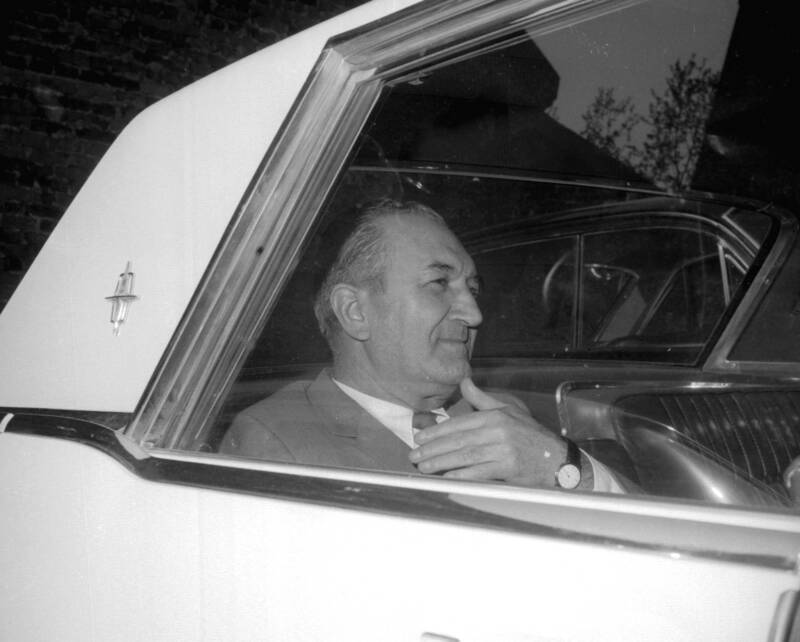 NY Daily News Archive via Getty ImagesJoseph Bonanno leaves a U.S. Federal Court after battling an indictment for failing to appear before a grand jury investigation in 1966. May 18, 1968. New York, New York.

When he released his autobiography in 1983, at the age of 78, Joseph Bonanno had lived the kind of life you’d want to read about. While still in his 20s, Bonanno built up a criminal empire that became one of the Mafia’s most enduring factions in America.

Then, remarkably, he was allowed to walk away and retire.

Joseph Bonanno was born on Jan. 18, 1905 in Castellammare del Golfo, Sicily, the same town that spawned the Don of the Genovese crime family, Joe Masseria, and the Cosa Nostra boss Salvatore Maranzano.

Although the Bonannos left Sicily for the United States while Joseph Bonanno was still a child, they only spent about 10 years in Brooklyn before the family returned to Italy.

It was back in Sicily that he was first introduced to the Mafia and it was, according to Selwyn Raab’s Five Families, Benito Mussolini’s crackdown on organized crime that motivated Bonanno to return to America without a visa in 1924. 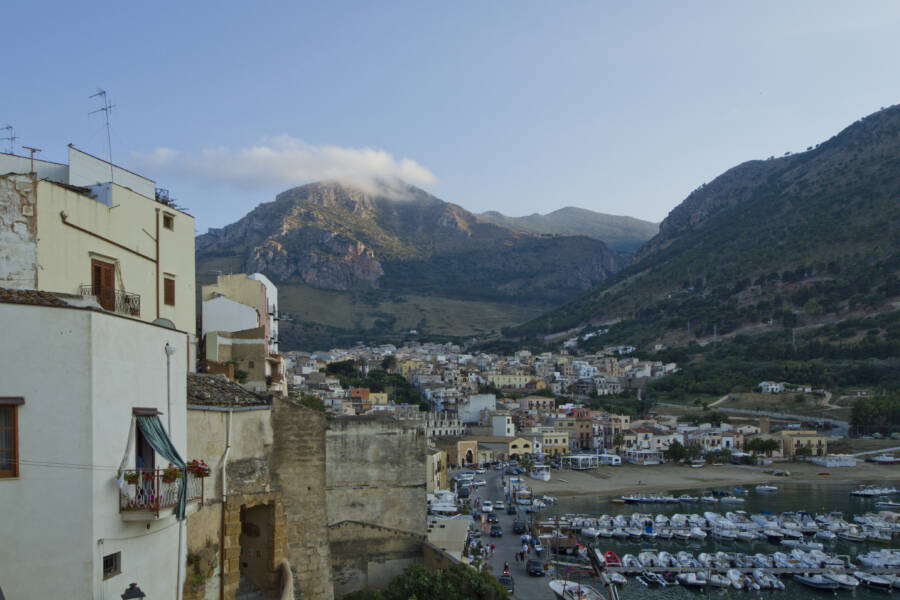 Wikimedia CommonsCastellammare roughly translates to castle or fortress by the sea. Bonanno left for the U.S. when Mussolini began cracking down on Mafia activity.

With Prohibition providing opportunities for up-and-comers of all stripes, Bonanno joined the Maranzano crew when he was just 19 years old, but was very well-read in contrast to his criminal colleagues.

“Among my Sicilian friends, in America, I was always singled out as a man of learning, if for no other reason than my ability to recite from The Divine Comedy or to expound on a few passages from The Prince. Most of the men I knew in the New World were not what you would call bookish.” — Joseph Bonanno.

According to former New York Police Department detective Ralph Salerno, Bonanno was “one of the people present at the creation of the whole thing — the American Mafia.”

The Castellammarese War was a year-long power struggle for dominance of the Italian-American Mafia between 1930 and 1931. The two warring factions were led by Joe “The Boss” Masseria and Salvatore Maranzano — Joseph Bonanno’s countrymen from Sicily.

Bonanno had been hired as Maranzano’s enforcer, protecting his distilleries and doling out punishment wherever needed. He called Prohibition “the golden goose,” and considered his time under Maranzano as an apprenticeship. 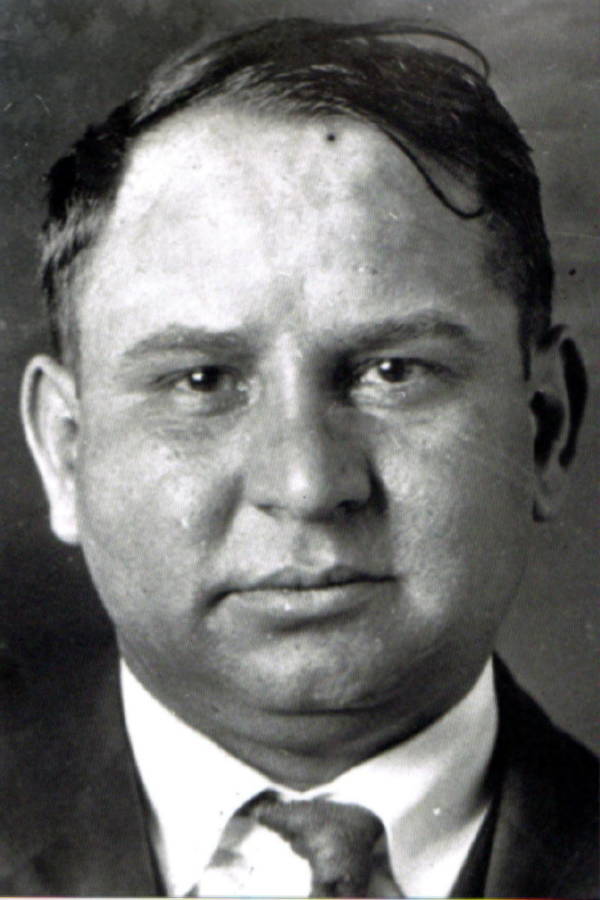 Wikimedia CommonsJoe “The Boss” Masseria was murdered while eating dinner and playing cards at a Coney Island restaurant. His death ended the year-long Castellammarese War. Aug. 10, 1922.

According to Carl Sifakis’ The Mafia Encyclopedia, the fight was between the old guard and the young bloods. The old timers held to traditional views of old-world organized crime, including strict fealty to more senior Dons and the prohibition against doing business with non-Italians.

This was what Masseria was protecting. He had notable mob figures like Charles “Lucky” Luciano, Vito Genovese, Joe Adonis, Carlo Gambino, Albert Anastasia, and Frank Costello (future mentor of Harlem’s Bumpy Johnson) fighting for him.

The other side saw younger, up-and-coming crews like Maranzano’s look to the future. They didn’t care what nationality a promising business partner held, and felt it unwarranted to pay fealty simply for seniority’s sake.

Though Luciano was part of the former guard, he found the war unnecessary and wanted to end its impingement on business. Nonetheless, violence between (and among) these factions spilled into the streets — usually in the form of hijacking each other’s alcohol trucks throughout the 1920s.

A Year Of Violence

The year 1930 was littered with bodies. Masseria first sent Vito Genovese to kill an ally, Gaetano Reina, with a shotgun. The Reinas then put their support behind the Castellammarese family.

Over the next few months, enforcers like Giuseppe Morello, Joseph Pinzolo, and Castellammarese ally Joe Aiello were murdered. Shootings spanned from Pinzolo’s Times Square office to the streets of Chicago. 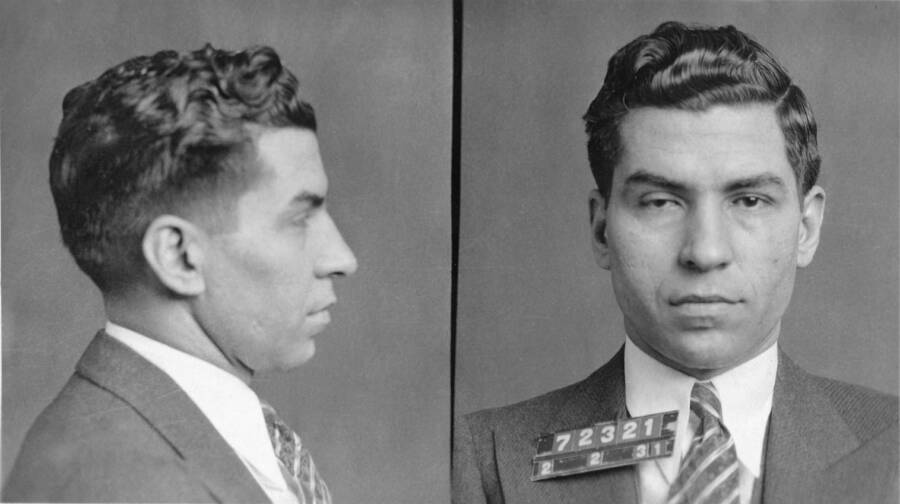 Wikimedia CommonsLucky Luciano eventually agreed to murder his own boss, Joe Masseria, to put an end to the bloody Castellamare War of 1930-1931.

After Aiello’s death, Maranzano struck back and ordered the murder of a vital member of Masseria’s crew, Steve Ferrigno. This led to numerous defectors to Maranzano’s side.

When Masseria top lieutenant Joseph Catania was killed, the losing team became very diplomatic. Luciano and Genovese reached out to Maranzano and struck a deal: Luciano would kill Masseria, and Maranzano would end the war.

Masseria was murdered while eating dinner at Coney Island’s Villa Tammaro restaurant on April 15, 1931. According to Critchley, The New York Times reported that Masseria was “seated at a table playing cards with two or three unknown men” when he was shot in the back, head, and chest.

The autopsy showed that he died with an empty stomach. Nobody was convicted, nobody saw a thing, and Luciano had a rock-solid alibi.

Restructuring The Mafia: The Five Families

With the war won, Maranzano reorganized the Italian-American mob. The Five Families of New York were to be headed by Luciano, Joseph Profaci, Thomas Gagliano, Vincent Mangano, and Maranzano. All would owe tribute to Maranzano, who was now capo di tutti capi — boss of all bosses.

This new structure established the now-familiar hierarchy of boss, underboss, crews, caporegime (or capo), and soldiers (or wise guys). Maranzano’s reign didn’t last long, however, as he was shot and stabbed to death in his office on Sept. 10, 1931.

This is when Joseph Bonanno inherited his boss’s stake, and became one of the youngest bosses of a crime family at 26. 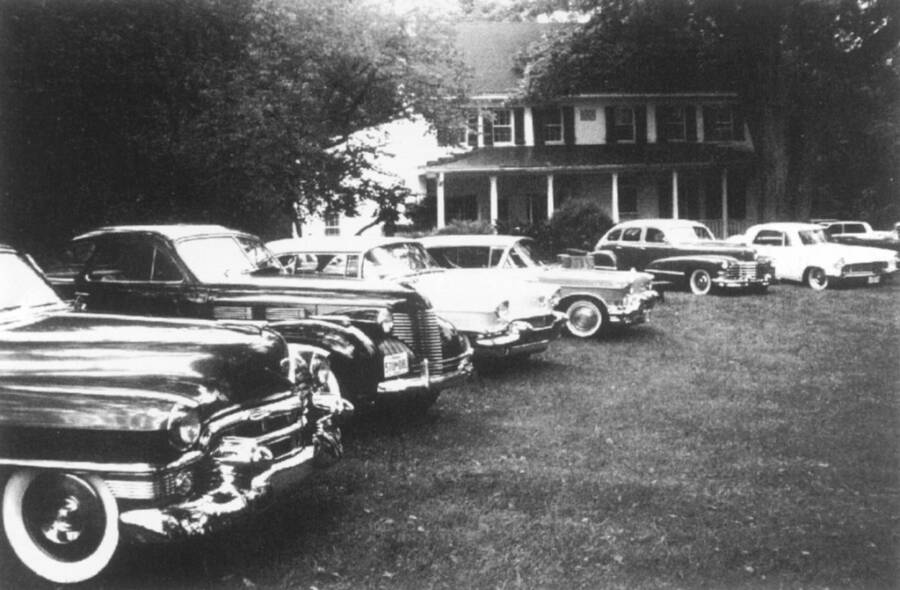 Wikimedia CommonsAll the major mob bosses attended the Apalachin Meeting of 1957 to discuss narcotics trafficking and more. The FBI raided it and arrested several members. The vehicles parked outside weren’t exactly subtle for the time.

Luciano, leader of the Young Turks, assumed control, but decided to keep Maranzano’s new blueprint intact. He aimed to regulate the modern Mafia like a corporation, calling it The Commission.

This council allowed family bosses to discuss affairs and vote on disputes before they turned into violence.

He allowed for all ethnicities to participate — as long as they raked in profit. According to Bonanno, this led to decades of semi-peaceful organized crime.

“For nearly a thirty-year period after the Castellammarese War no internal squabbles marred the unity of our Family and no outside interference threatened the Family or me,” he wrote.

The Bonanno crime family was small, but effective. With Frank Garofalo and John Bonventre as underbosses, Bonanno’s faction ran the gamut from loan-sharking and bookmaking to numbers running, prostitution, and real estate.

Since Joseph Bonanno’s secretive 1924 entry into the U.S. made him an undocumented immigrant, he left the country in 1938 in order to re-enter legally and apply for citizenship. It was granted years later in 1945 when he was already a multi-millionaire.

To his credit, Bonanno was never convicted, charged, or arrested–not even once–during his criminal career. Even during the upstate Apalachin Meeting of 1957 — a summit of the American Mafia where issues like drug trafficking were discussed — he avoided being arrested by the FBI. 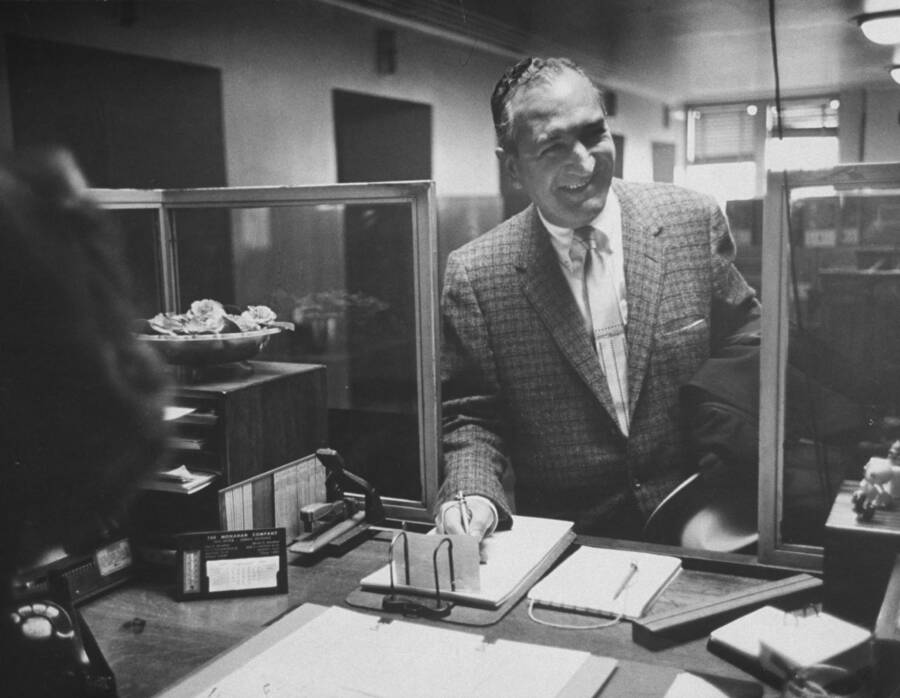 It was a failed hit that led to real trouble for Bonanno. When his friend Joe Profaci died, the Profaci Crime Family was handed over to Joe Magliocco. He was soon pressured by Tommy Luchese and Carlo Gambino, which led Bonanno to meet with Magliocco to plan their murder.

Joe Colombo was hired for the hit, but instead, told his targets that Magliocco sent him. They knew instinctively Magliocco wasn’t working alone, and identified Bonanno as his partner. When The Commission demanded the two to be questioned, Bonanno didn’t show.

Unfortunately for him, U.S. Attorney Robert Morgenthau subpoenaed him to testify before a grand jury investigating organized crime. Faced with two uncomfortable appointments on either side of the law, Bonanno fled and went into hiding in October 1964. Leaderless, control of the Bonanno Crime Family was handed over to Gaspar DiGregorio.

When Joseph Bonanno resurfaced in May 1966, he claimed to have been kidnapped by the Buffalo Crime Family’s Peter and Antonino Maggadino — almost certainly a lie. 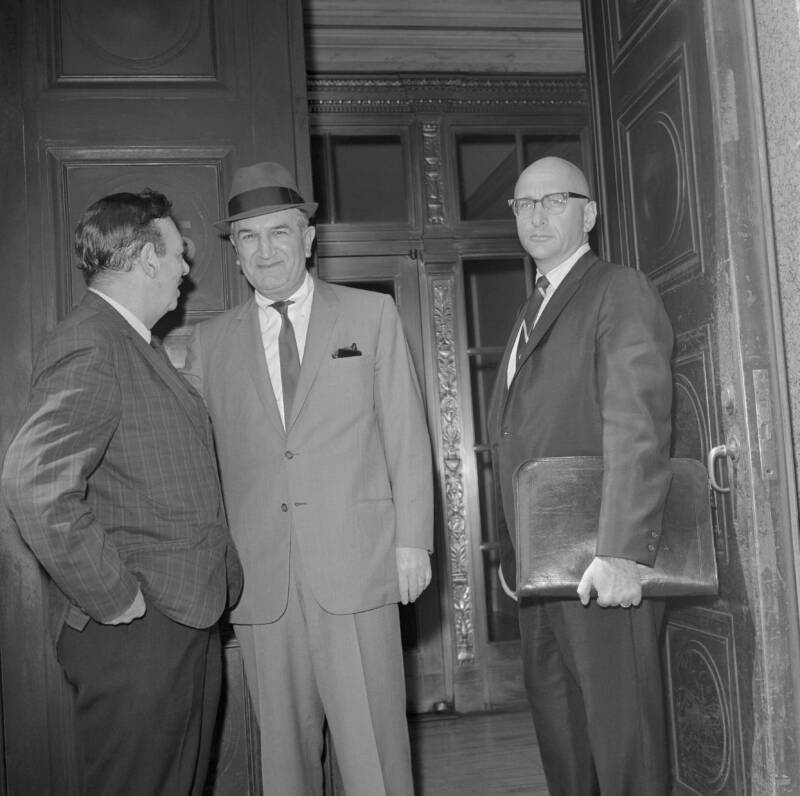 He was then indicted for his failure to appear before a grand jury, but he challenged the indictment for five years until it’s dismissal in 1971.

With the Bonanno family split apart — with DiGregorio loyalists on one side and faithful Bonanno devotees on the other — Bonanno struggled to rally a crew that was as tight as it once was.

Nonetheless, he tried, with violence erupting at a sit-down in Brooklyn in 1966. Nobody died at that meeting, but the warring continued — then Bonanno did the unthinkable. He announced his retirement in 1968. 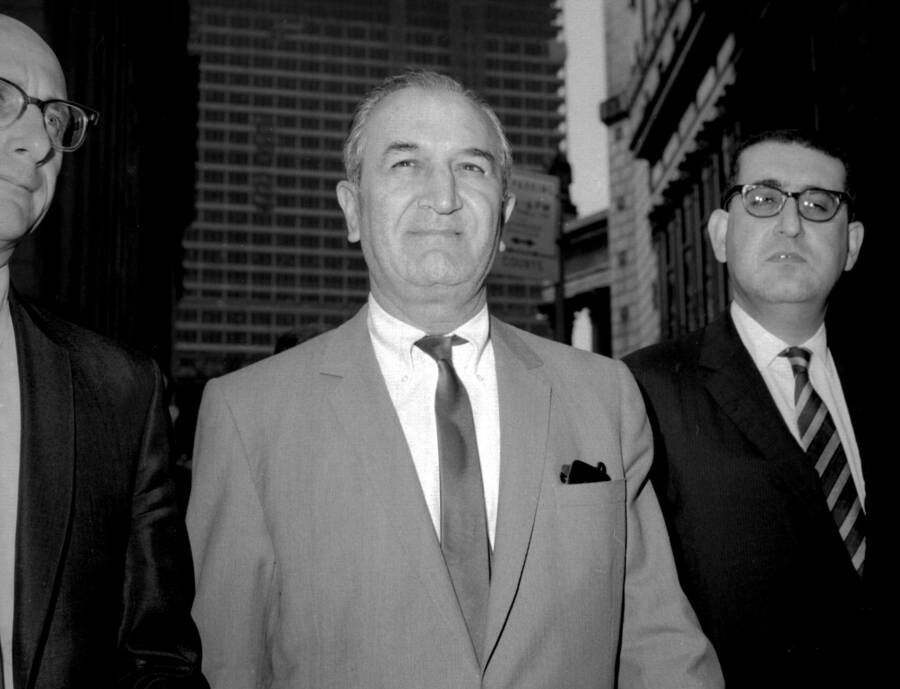 This usually doesn’t go over well — once you’re in the mob, you don’t just get to walk away — but with Bonanno’s status as a former boss and his promise never to involve himself in the mafia again, The Commission accepted his terms. They stipulated, however, that should he break them he would be killed on sight.

Retirement As A Mobster

According to The New York Times, Joseph Bonanno was convicted for the first time in his life at the age of 75 in 1980. Charged with conspiracy to obstruct justice, the jury found him guilty attempting to block a grand jury investigation into alleged money laundering through companies owned by his sons. 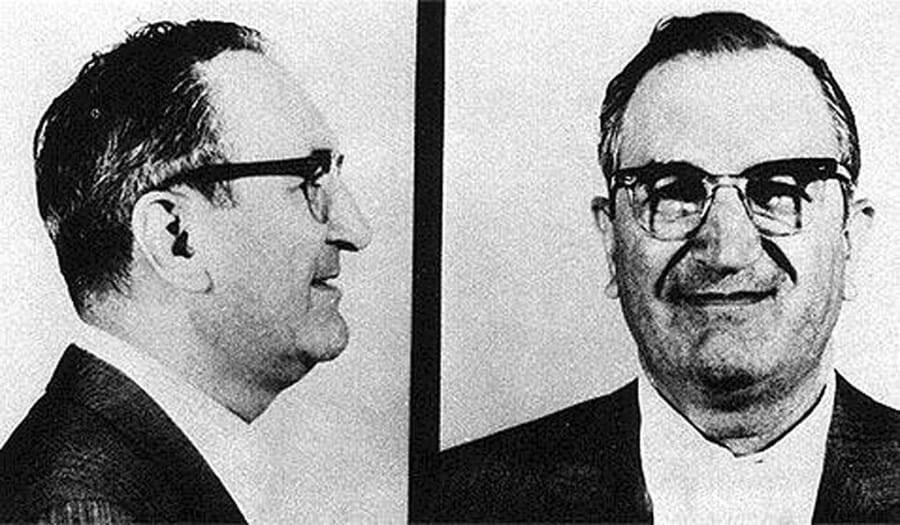 Wikimedia CommonsBonanno was charged with conspiracy to obstruct justice and convicted at the age of 71 in 1980. It was his first arrest.

He spent a year in prison, and was then imprisoned again for 14 months in 1985, this time for refusing to testify in a New York racketeering case against leaders of the Five Families.

Rudy Giuliani, then-U.S. Attorney in Manhattan, pressed Bonanno about statements he had made in his autobiography — namely about the existence of The Commission — but he told the government nothing during the trial.

Although Bonanno’s literary career violated the Mafia’s code of secrecy, or omertà, perhaps more flagrant to the mob was Bonanno’s appearance on 60 Minutes with Mike Wallace in April 1983. By then, however, he was a civilian, and his work was out in the open for all to see.

Bonanno’s life of crime, as well as Bumpy Johnson and Frank Costello’s, is currently being dramatized in the Epix series Godfather of Harlem. It’s his book, however, that is truly a tantalizing first-hand history of the American mob.

“In a world where most of the players were, at best, semi-literate, Bonanno read poetry, boasted of his knowledge of the classics, and gave advice to his cohorts in the form of quotes from Thucydides or Machiavelli.”

Joseph Bonanno passed away of heart failure on May 11, 2002 — leaving behind one hell of a story of the rise of the American Mafia.

After learning about Joseph Bonanno, the Sicilian immigrant who became the boss of one of New York’s Five Families of organized crime before safely retiring, read about Paul Castellano’s brazen assassination and the rise of John Gotti. Then, learn the true story of “Donnie Brasco” and Joseph Pistone’s undercover fight against the Mafia.