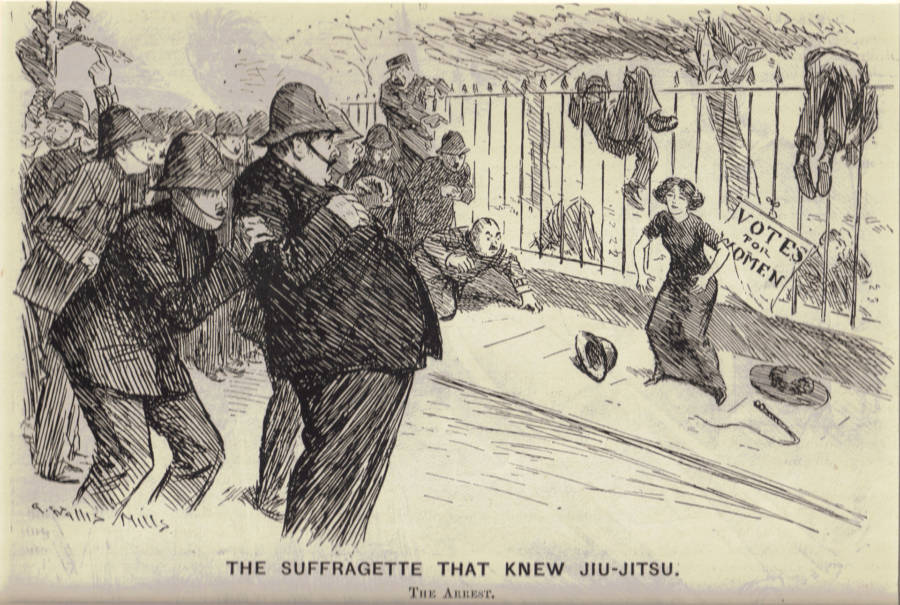 Wikimedia Commons“The Suffragette that Knew Jiu-Jitsu. The Arrest.” By Arthur Wallis Mills, originally published in 1910 in Punch and The Wanganui Chronicle.

It was less humorous in practice, though. And as the government became more and more desperate to shut the resistance down, self-defense became a key component of the movement.

In 1913, the “Cat and Mouse Act” further escalated the need for protection.

“This Act allowed for the early release of prisoners who were so weakened by hunger striking that they were at risk of death,” the UK Parliament site explains. “They were to be recalled to prison once their health was recovered, where the process would begin again.”

Organizers realized Pankhurst couldn’t afford to be captured again. She was too important to the movement to spend years being shuttled back and forth between jail cells.

They needed to protect her, so Edith Margaret Garrud and fellow suffragette Gertrude Harding created the Bodyguard.

Nicknamed “The Amazons” by the media, this group of 30 young and fit suffragettes acted as a line of defense around Pankhurst.

They hid bowling-pin shaped clubs, flower pots, and other makeshift weapons in the folds of their dresses. They created subtle armor with cardboard and cotton padding.

The Bodyguard was constantly prepared for any call to action — sometimes receiving no more warning or explanation than a phone call instructing them to follow a certain car.

Other times, the strategy was more planned. In 1914, for example, the women formed a semicircle around a podium where Pankhurst — who had snuck past the police surrounding the event by posing as a spectator — was scheduled to speak.

Pankhurst emerged from the crowd and got about 30 seconds of words out before officers charged the stage.

The Bodyguard caught the police in barbed wire they had hidden in their bouquets. They then engaged in an all-out brawl onstage in front of 4,000 people before Pankhurst was finally carted away.

Later that same year, Pankhurst was speaking from a balcony in Camden Square. Following Garrud’s instructions, she wore a veil and spoke with the Bodyguard at her side.

Once again, the police swooped in, batons waving. They beat the women and hauled an unconscious Pankhurst out of the fight — only to discover that it wasn’t her.

A decoy from the security team had also worn a veil so that she could take the fall while Pankhurst snuck away.