The Tragic Story Of Kamiyah Mobley, The Girl Who Was Abducted As A Baby And Raised By Her Kidnapper

In 1998, Gloria Williams stole newborn Kamiyah Mobley from a Jacksonville, Florida hospital and raised her under the name Alexis Manigo. Then, Mobley learned the truth 16 years later. 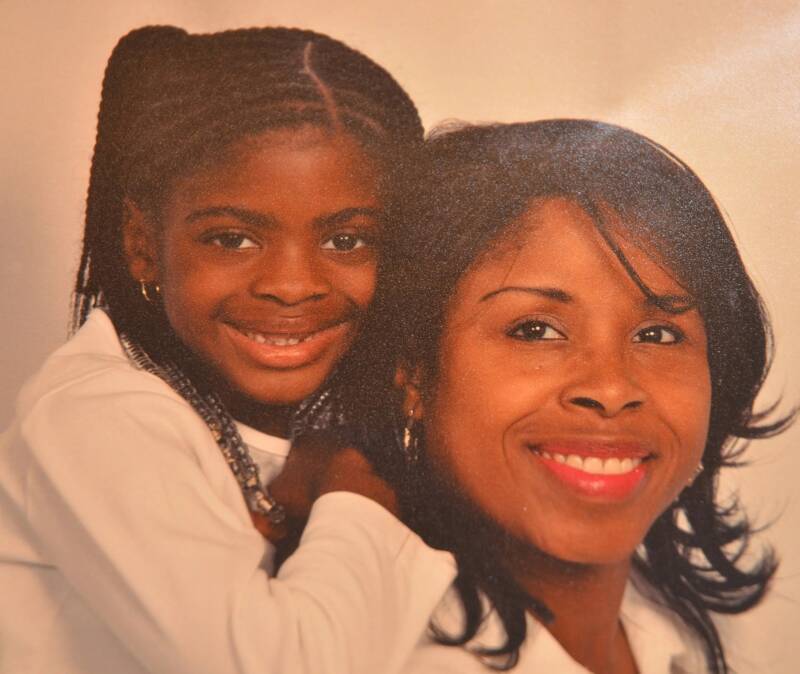 Florida State Attorney’s OfficeKamiyah Mobley and her kidnapper, Gloria Williams, who raised her as her own child.

Until she was 16 years old, Alexis Manigo led a normal life. Growing up in Walterboro, South Carolina, Manigo went to school, attended church, and spent time with her mother, Gloria Williams. But when she tried to get a Social Security number, she learned that her life was a lie. Williams had abducted her as a baby — and her real name was Kamiyah Mobley.

Unbeknownst to Mobley, she’d been abducted in 1998 from a Florida hospital just hours after she was born. For 16 years, her biological parents – Shanara Mobley and Craig Aiken — had hoped for her safe return.

Though Mobley declined Williams’ offer to turn herself in to law enforcement, the truth eventually came out. But the relationship between Kamiyah Mobley, her kidnapper, and her birth parents, is anything but simple today.

The Audacious Abduction Of Kamiyah Mobley 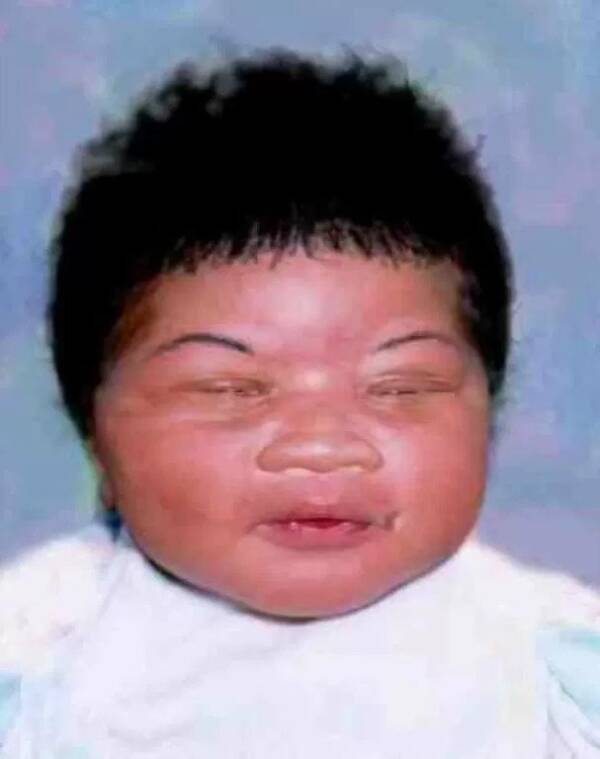 National Center For Missing And Exploited ChildrenKamiyah Mobley was just hours old when she was abducted from her mother’s hospital room.

On July 10, 1998, 16-year-old Shanara Mobley gave birth to a healthy, eight-pound baby girl in Jacksonville, Florida. According to USA Today, Shanara had had a tough life, and she saw her new baby as a chance to get things right.

Just a few hours after Mobley’ birth, a woman wearing scrubs walked into Room 328 at the University Medical Center where Shanara and her daughter were resting. Her name was Gloria Williams, and though she presented herself as a nurse, the truth was much more complicated.

According to the Post and Courier, Williams had left her job at a Charleston nursing home that afternoon in a fog of despair. She was in an abusive relationship, she’d recently lost custody of her two sons, and, worst of all, she’d suffered from a miscarriage that she kept from her loved ones.

Struggling with postpartum depression, Williams didn’t go home to South Carolina but instead drove for four hours to Florida’s University Medical Center. For a while, she stood and looked at the babies in the nursery. Then, she walked into Shanara’s room and found her with her infant daughter.

For hours, the two women talked. Presenting herself as a hospital nurse, Gloria offered Shanara comfort and support and even fetched her a new hospital gown. But at around 3 p.m., she told the 16-year-old that she had to take the baby out of the room to check her temperature.

Instead, Williams put Mobley in a bag, walked to her car, and drove home to South Carolina. She told her family that she’d gone into labor at work and given birth to a daughter. Meanwhile, back in Florida, Shanara Mobley screamed frantically for her missing baby.

The Jacksonville Sheriff’s Office followed over 2,000 leads during the next two-and-a-half years in hopes of bringing Kamiyah Mobley home. But no one would know what happened to her for 18 years. 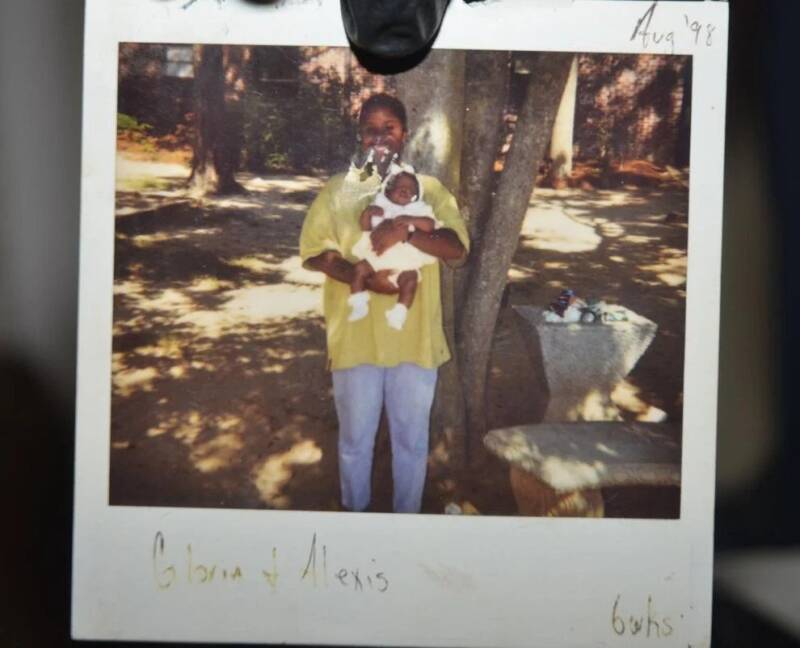 Florida State Attorney’s OfficeGloria Williams with “Alexis Manigo,” about a month after she’d kidnapped the infant in Florida.

As Shanara Mobley struggled to put her life back together following Mobley’s kidnapping, everything in Gloria Williams’s life seemed to fall into place. She left her abusive relationship, regained custody of her sons, remarried, and raised Mobley as her own daughter — though now renamed Alexis Manigo.

Growing up in Walterboro, South Carolina, Mobley had a normal, happy life. She went to school, attended church, hung out with her brothers, and invited friends to her house, which Williams made warm and welcoming.

“She was very open to all my friends I brought through that door,” Mobley later said. “She was one of those mothers, she was like open to sleepovers, open to company. Always smiling, always upbeat, up-tempo about everything. Very hard-working, very hard-working.”

When Mobley was 16, however, she discovered that that her mother had a dark secret. Then, according to AETV, Mobley found out that she didn’t have a Social Security number, which she needed to get a job or drive a car. To her shock, her mother confessed that she’d abducted her as a baby.

Though Williams offered to turn herself in, Mobley demurred. She didn’t want to lose her mother. But in January 2017, the National Center for Missing and Exploited Children received two tips about Gloria Williams. They showed up in Walterboro, conducted DNA tests, and confirmed the secret that Williams had tried to hide. Alexis Manigo was really Kamiyah Mobley.

Back in Florida, Shanara was ecstatic. Though she’d since had more children, she’d never forgotten her firstborn baby. Ever year, on Mobley’s birthday, Shanara had started a tradition of buying a cake and putting it in the freezer — just in case Kamiyah showed up.

“It was one of the happiest days of my life,” Shanara told USA Today of learning about Mobley’s recovery and Gloria Williams’ arrest.

But it wasn’t exactly the happy reunion she’d always imagined. Kamiyah Mobley, after all, saw Gloria Williams as her mother. 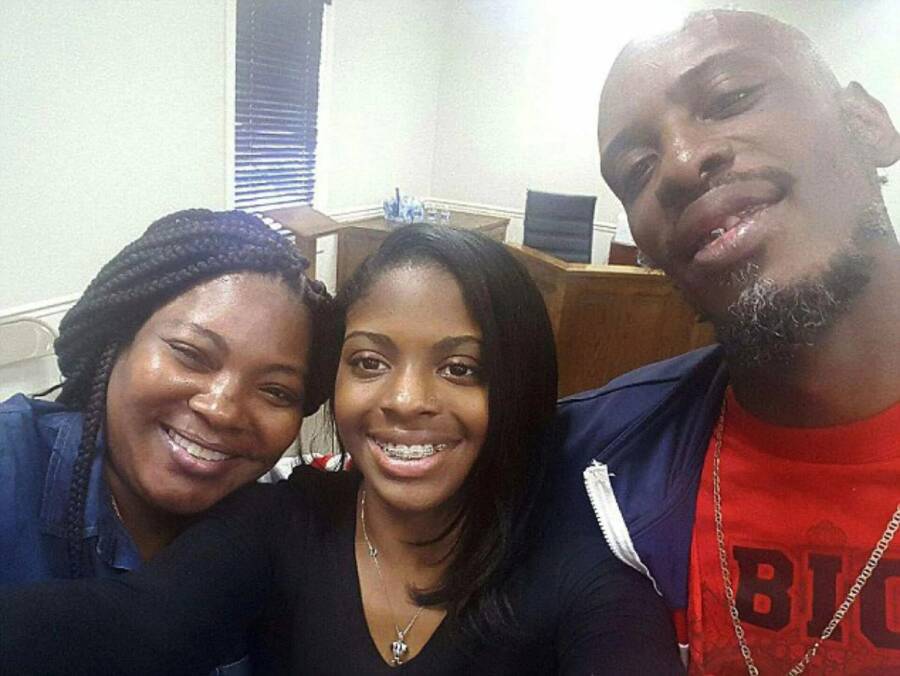 FacebookKamiyah Mobley with her biological parents.

Shortly after police tracked Kamiyah Mobley down, she met her biological parents, Shanara and Craig Aiken, for the first time.

“First meeting was beautiful, it was wonderful, couldn’t have gone any better… she was glad to meet us,” Aiken said, as reported by the Independent. “It’s a feeling that you can’t explain; it’s hard to put it in words right now. It’s hard to deal with this here right now.”

But though Shanara and Aiken had gained their daughter back, Kamiyah Mobley had lost the woman she saw as her mother. And Gloria Williams’ trial revealed the tension and deep pain that existed across the two families.

In February 2018, Williams pleaded guilty to kidnapping and interfering with state custody. At trial, as 19-year-old Mobley quietly listened, both Williams and Shanara described the effect of the kidnapping on their lives.

For her part, Shanara described her elation at giving birth, and deep grief at having her baby stolen away from her. According to the Post and Courier, she screamed at Williams to leave her family alone at one point and told the judge she wanted the death penalty for her daughter’s kidnapper.

Williams, for her part, expressed regret for what she had done.

“I know I wronged you and I’m so sorry,” she told Shanara and Aiken, insisting that she hadn’t gone to the hospital meaning to kidnap a baby. “So many days — so many days — so many days I just wanted to pick that child up and say, ‘Come on, let’s get in this car and go.’ I just couldn’t. When I left Jacksonville, I didn’t look back. I didn’t know what you went through.”

In the end, the judge found Williams guilty and sentenced her to 18 years in prison. But her imprisonment didn’t heal Shanara’s wounds. According to USA Today, Mobley’s continued loyalty to Williams caused tension with her birth mother, who even blocked her daughter’s number at one point.

“As long as she can call her and go see [Williams], that’s her momma,” Mobley told USA Today in 2018, even saying that she wished Kamiyah had never been found. “I’m about to start calling her Alexis so I won’t be hurt. I’m serious. I’m serious. I have to start doing things where I don’t hurt no more.”

Indeed, Kamiyah Mobley has stuck by Williams’s side. In March 2022, she even wrote a letter asking for Williams’ early release.

“I would like to make it very clear that she is my mother,” Kamiyah wrote, as reported by WCSC. “She raised me, and not only provided for my needs, but she loved me unconditionally… I am fully aware of how our lives came to be, what they are and how my mom came to be my mom.”

Mobley added: “However, at the end of the day, I love my mother and I wholeheartedly support her! I ask for the court’s grace and mercy, as I need my mother home.”

To date, Gloria Williams remains in prison, her plea for an early release denied by a judge. And though Kamiyah Mobley and her birth mother haven’t made any recent news, they appear to have slowly reconciled over the years.

“We bump heads so much cause we so much alike,” Mobley wrote on Facebook with a photo of Shanara in 2021. “But she’s so perfect to me.”

After reading about Kamiyah Mobley, look through these mysterious disappearances that remain puzzling to this day. Or, learn how Natascha Kampusch survived eight years in her kidnapper’s cellar.