While some of the octopuses appeared to throw objects to clean their dens or discard food, more than half were recorded throwing objects after fighting, mating, or grappling with another octopus. 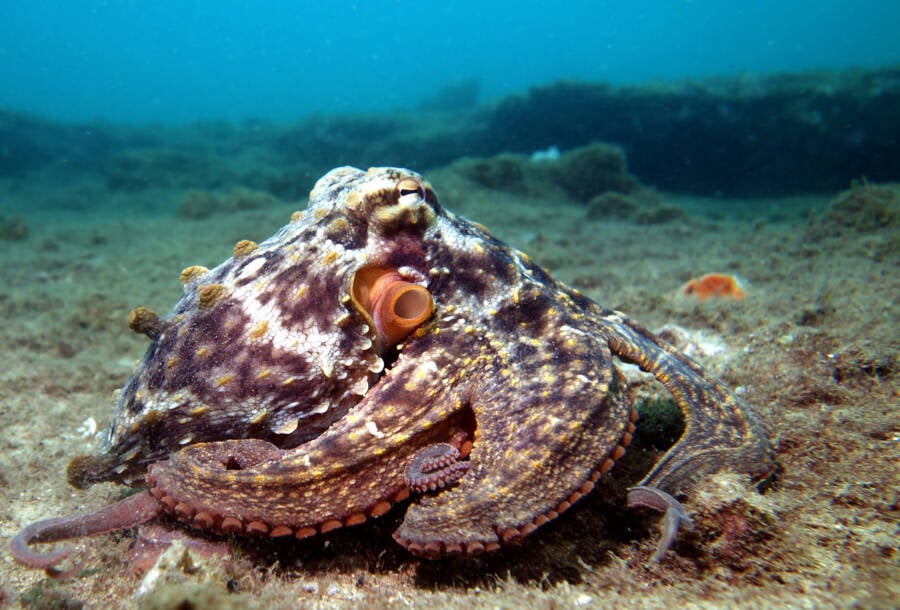 While observing hours of video taken near octopus dens in Jervis Bay, Australia, scientists noted a strange phenomenon: Sometimes, the octopuses gathered objects and flung them at other octopuses.

According to a study published in the journal Plos One, this surprising behavior was recorded over 21 hours at two sites nicknamed Octopolis and Octlantis, home to the gloomy octopus (Octopus tetricus).

The researchers observed several of the octopuses gathering silt, shells, or algae, then using their siphons to expel the objects at octopuses nearby.

The researchers noted that these throws happened within two minutes of the creatures fighting, mating, or grappling with each other. But why?

After studying the footage, the researchers aren’t entirely sure.

“The throwing – or propelling, or projecting – of objects that have been gathered and held is rare in the animal kingdom,” study lead author Peter Godfrey-Smith of the University of Sydney told The Guardian, calling the octopus behavior “surprising.” He added: “To propel an object, even for a short distance, underwater is especially unusual, and also quite hard to do.”

“We weren’t able to try and assess what the reasons might be,” David Scheel, the study co-author and a behavioral ecologist at Alaska Pacific University in Anchorage, additionally told Nature. But he noted that throwing, “might help these animals deal with the fact that there are so many octopuses around.”

Indeed, Jervis Bay is home to unusually high concentrations of octopuses. As The New York Times explains, octopuses are generally solitary creatures. But multiple octopuses live in dens in resource-rich Octopolis and Octlantis, bringing them in unusually close contact with each other.

Often, the octopus throws did seem aggressive. According to The Guardian, the octopuses prepared for some throws by using an unusual number of legs, throwing things forcibly, and turning a dark color. The researchers noted that earlier octopus research in Jervis Bay has suggested that “darker colors are associated with more aggressive behaviors.”

“They had dens right next to each other,” Godfrey-Smith explained to The New York Times, “and I think they didn’t like to be in each other’s faces as much as they were.”

In fact, many of the throwing interactions that the researchers observed seemed to reflect the octopuses’ annoyance at each other.

“I think quite a lot of it is a bit like an assertion of ‘personal space’,” Godfrey-Smith told The Guardian. “In quite a few cases, females have thrown material at male octopuses who have been attempting to mate with them… But in other cases, females throw and hit other females.”

Regardless of why the octopuses throw things, the discovery is significant. As The New York Times notes, other animals like elephants (and humans) have been known to toss objects, often at each other, but this is the first time that the octopuses have been recorded exhibiting the same behavior.

“Even if no intention to hit other octopuses lies behind these throws, they do have social effects in interactions between individuals at this site,” the researchers explained. “Octopuses can thus definitely be added to the short list of animals who throw or propel objects, and provisionally added to the shorter list of those who direct their throws on other animals.”

After reading about how octopuses were recorded throwing things at each other, discover the story of the blue-ringed octopus, the adorable — but very deadly — deep-sea creature. Or, see how octopuses on MDMA acted a lot like humans do while high.