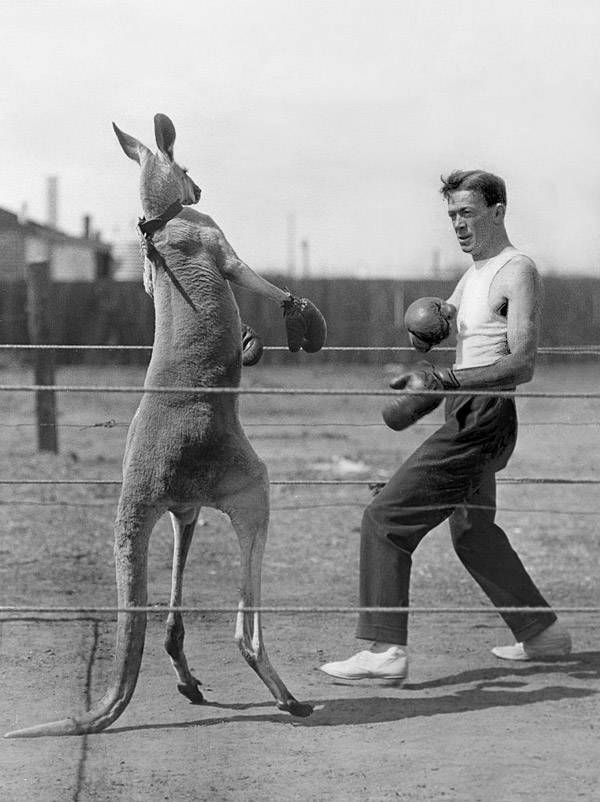 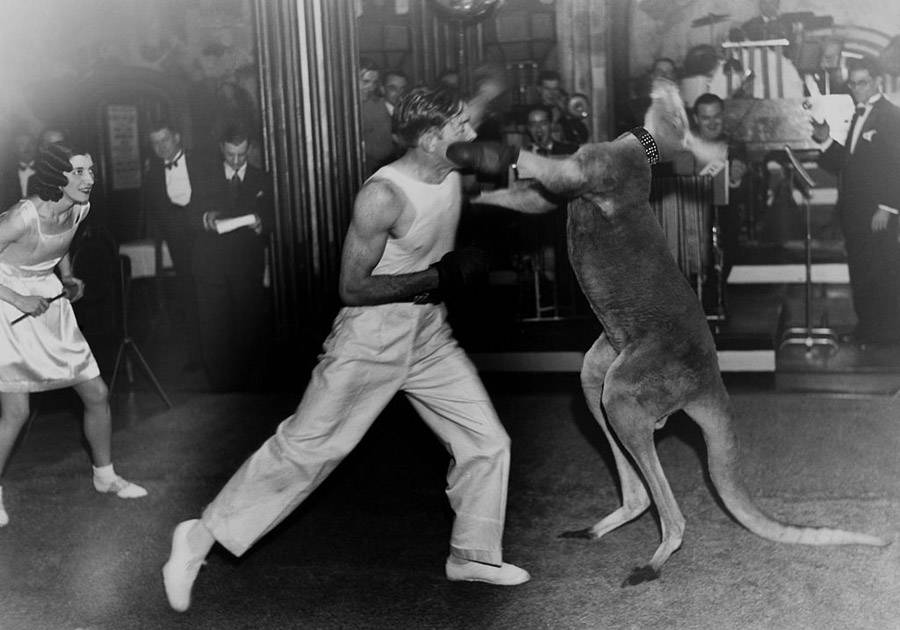 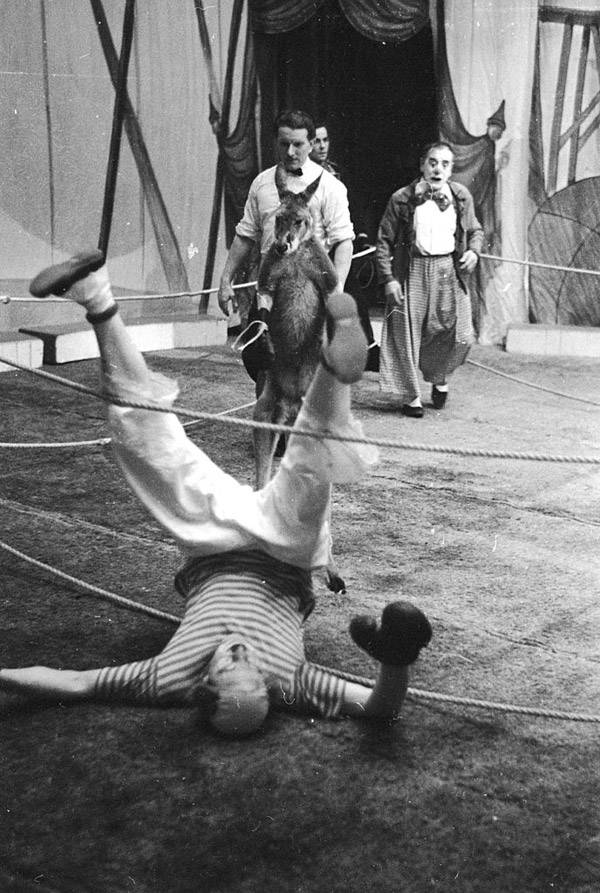 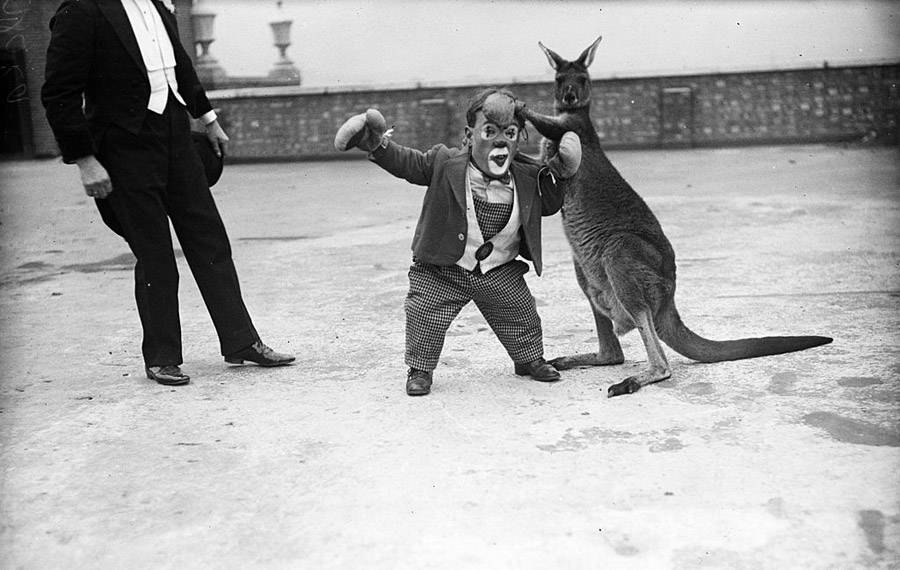 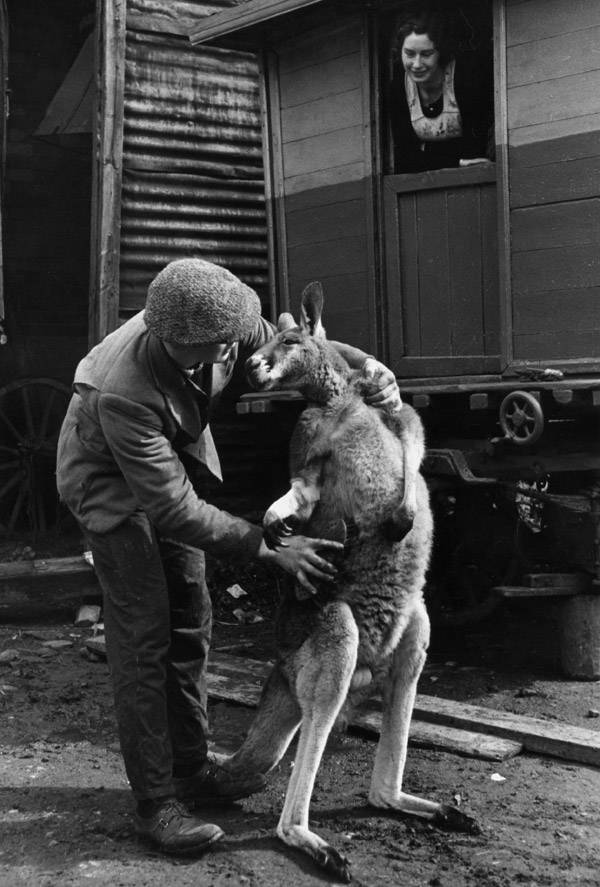 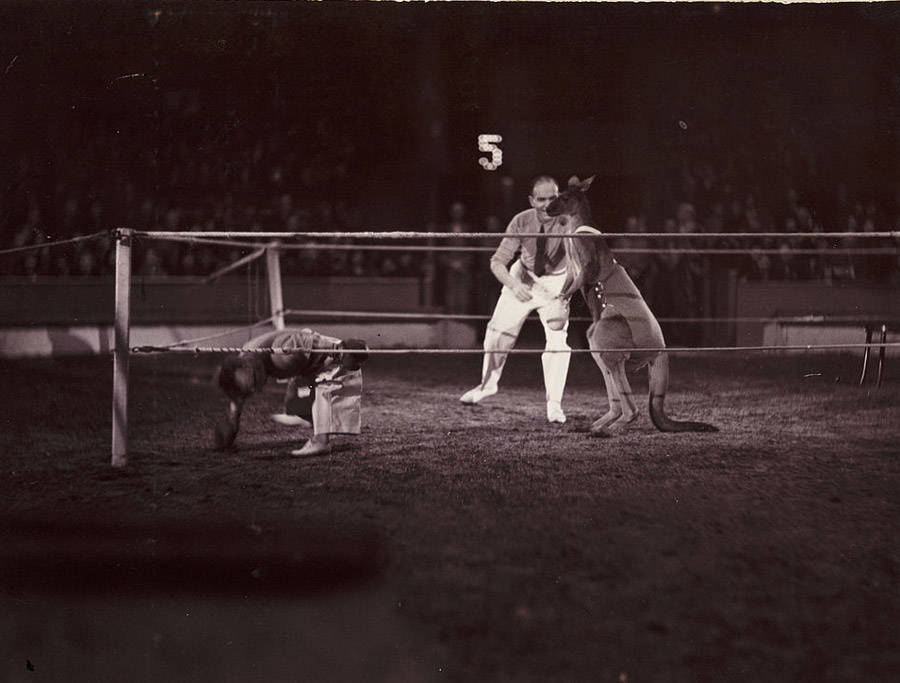 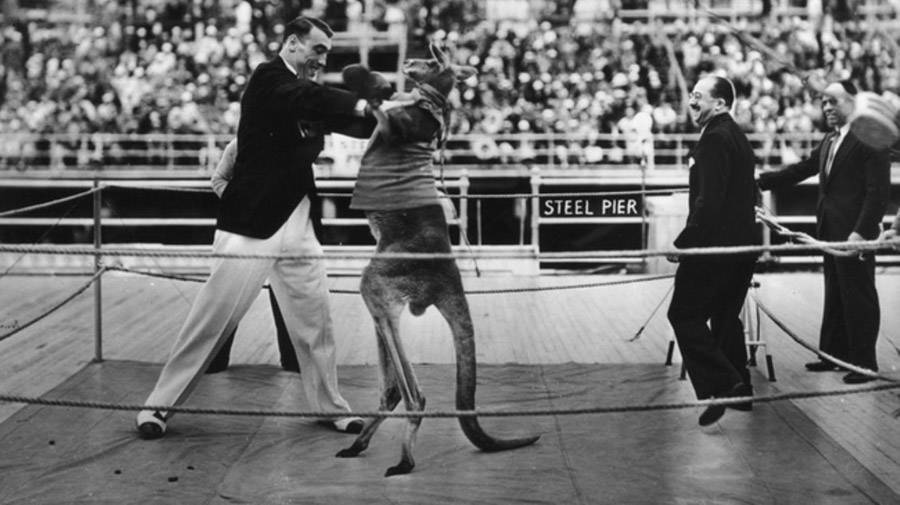 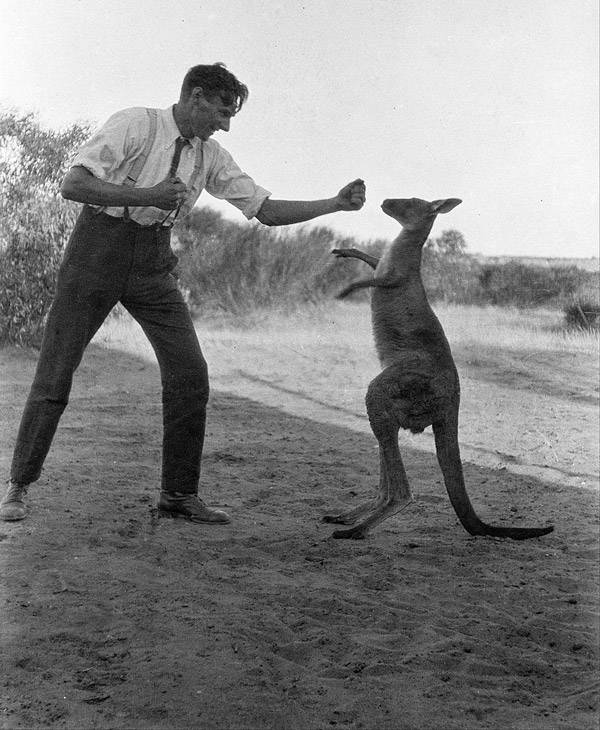 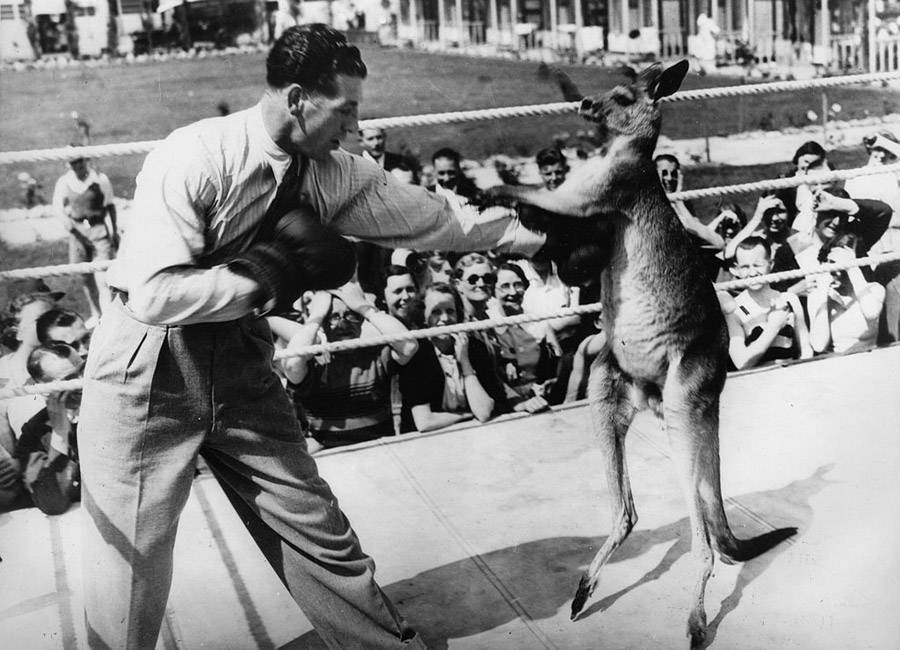 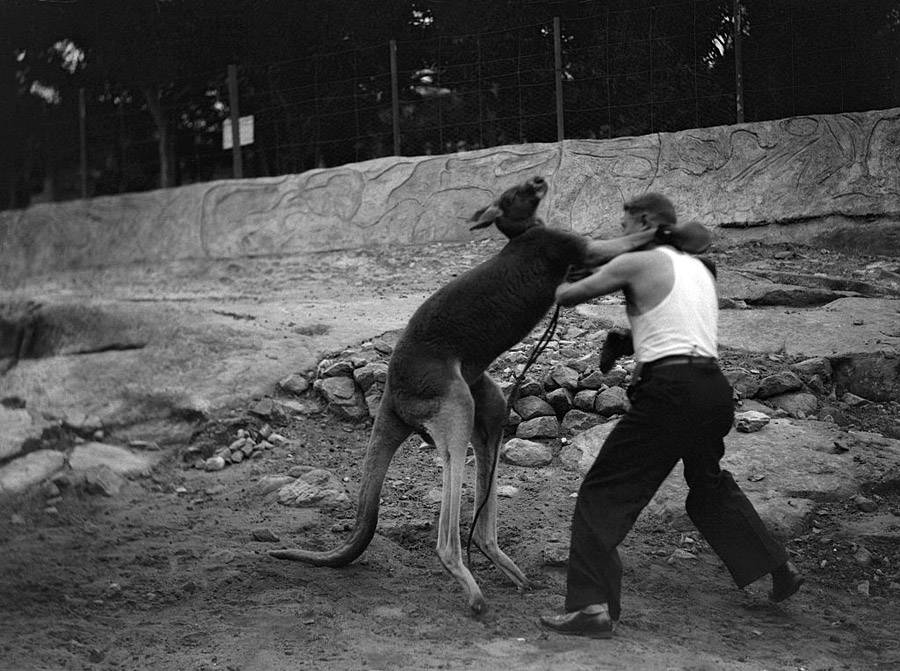 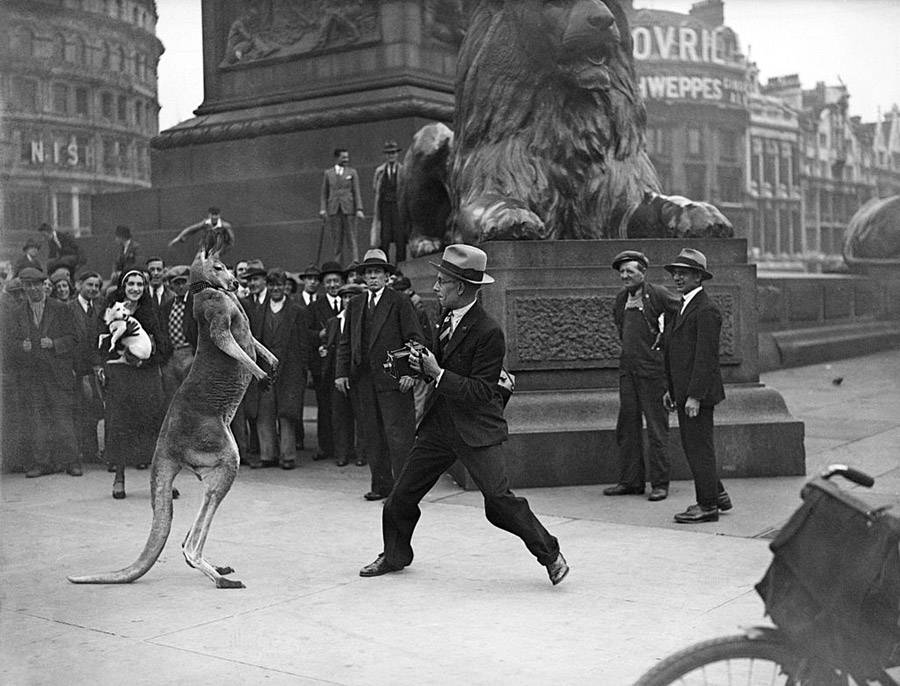 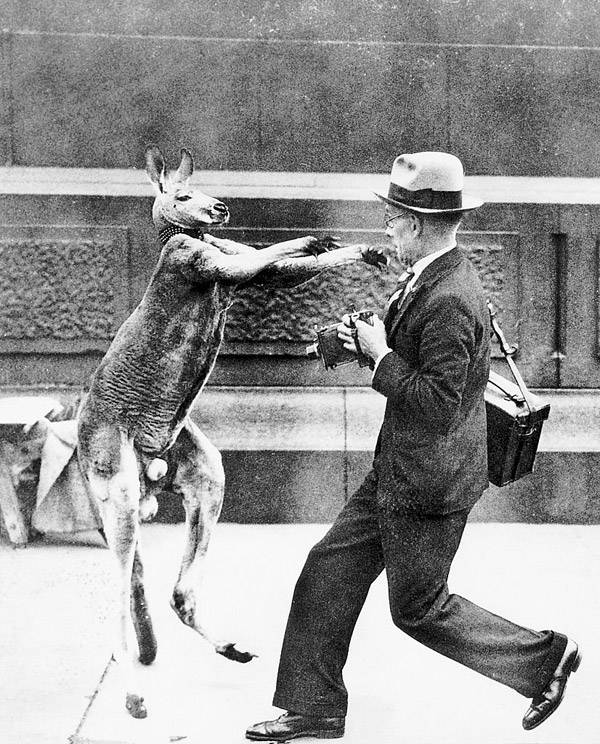 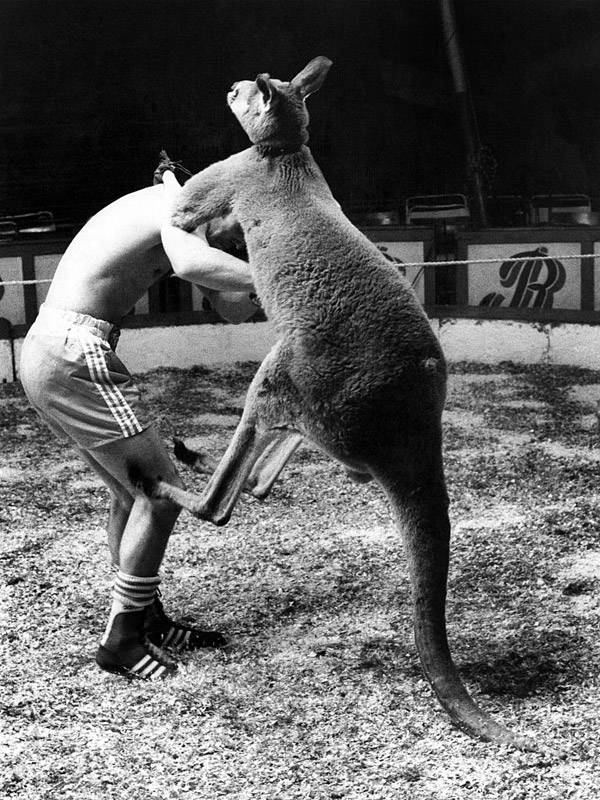 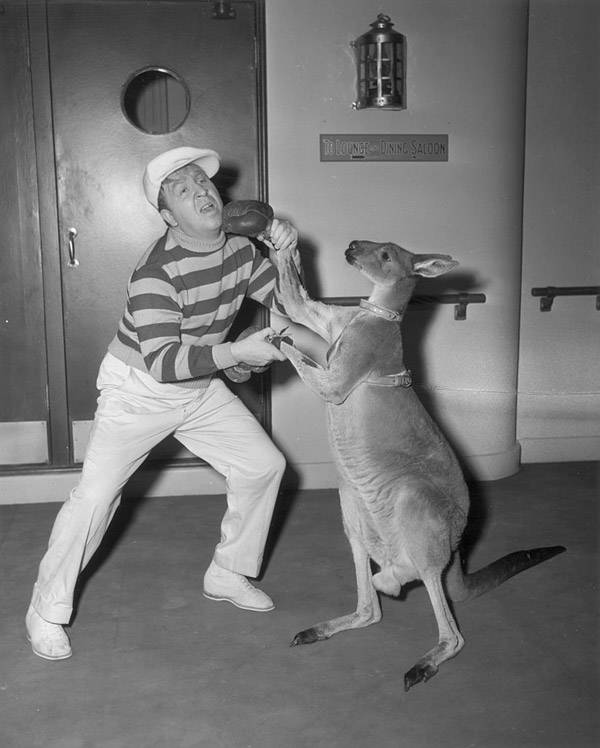 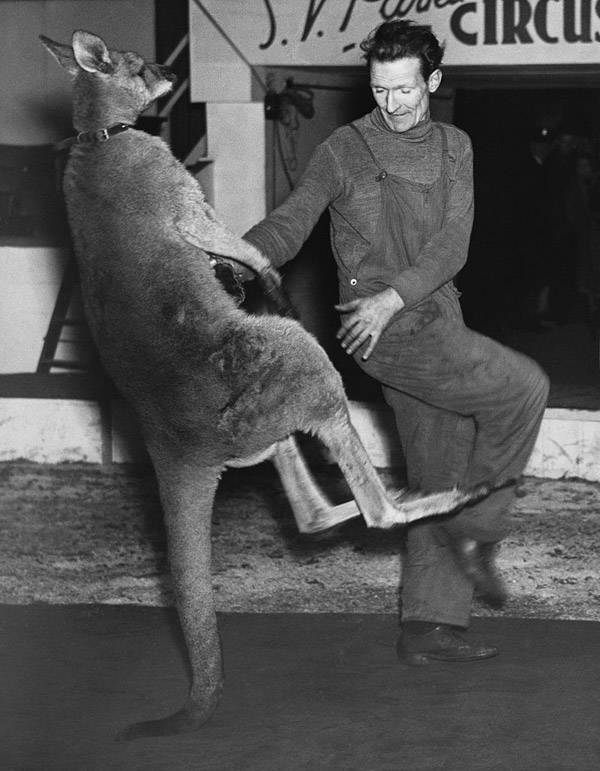 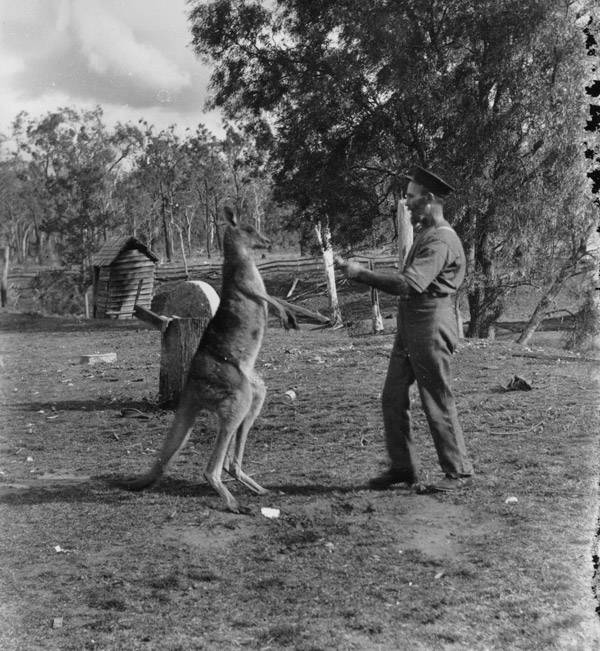 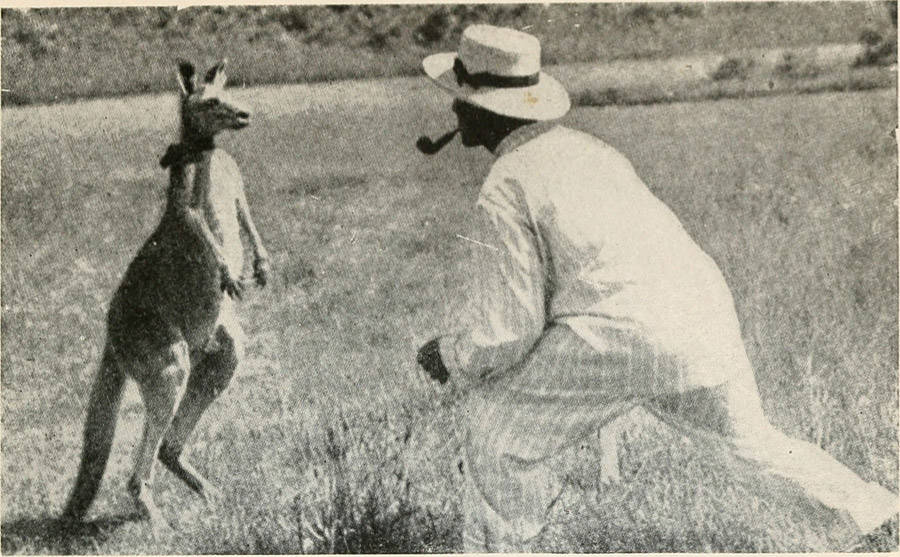 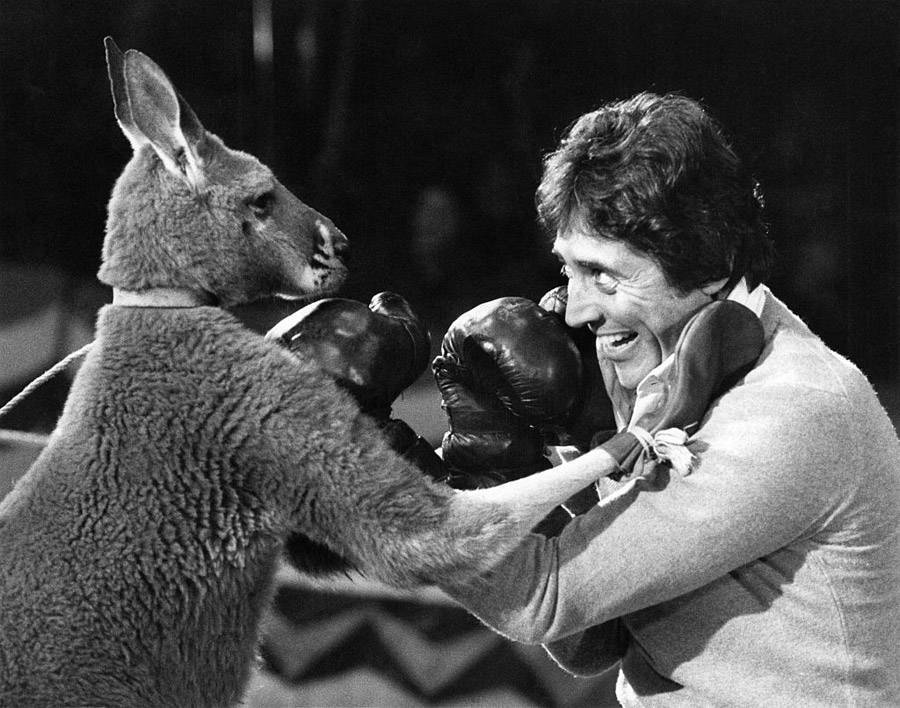 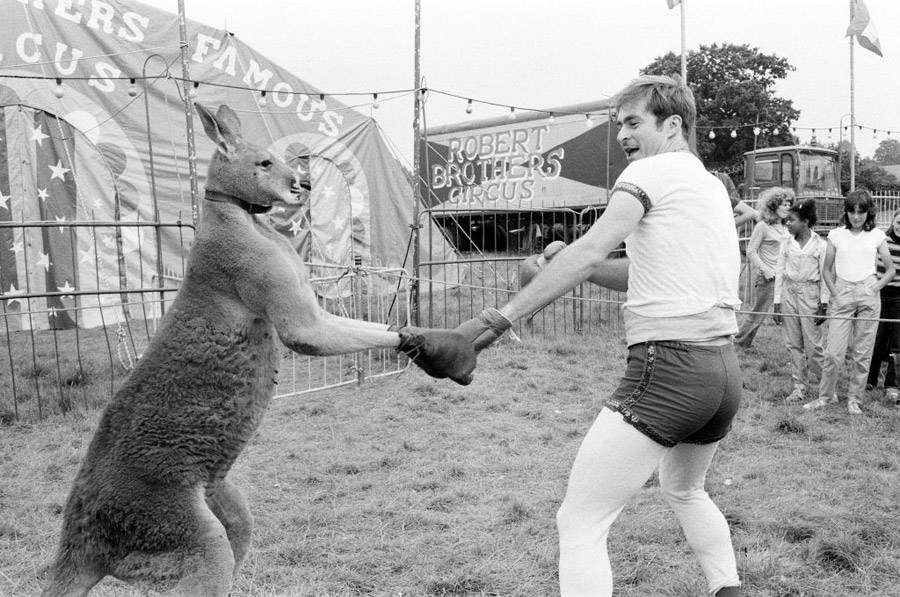 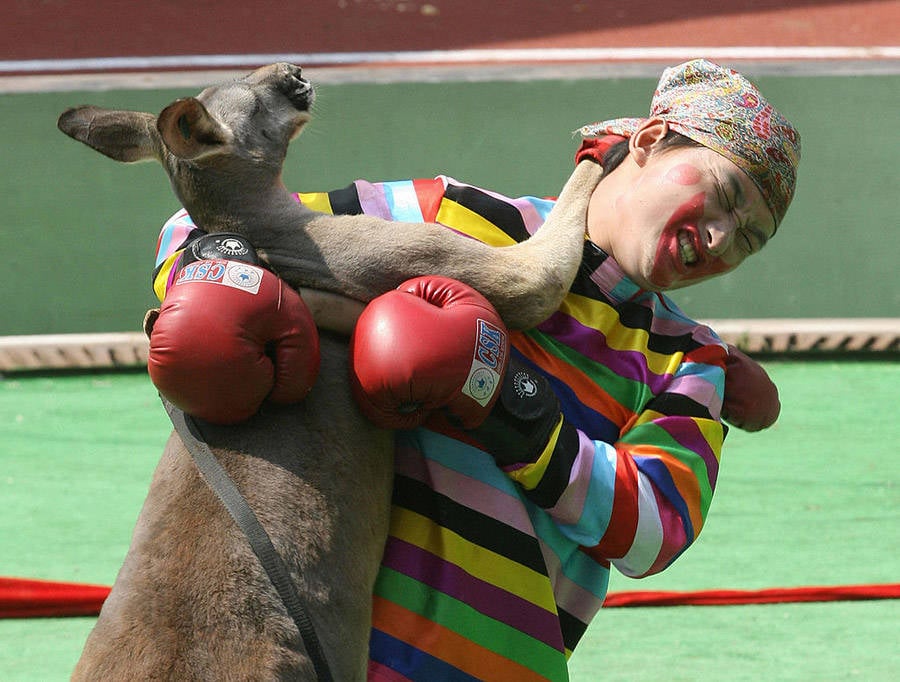 1 of 21
A man spars with an equally tall kangaroo outfitted with boxing gloves. Berlin, Germany. 1924. Ullstein Bild via Getty Images
2 of 21
A man slugs a kangaroo with a left hook as bystanders look on during a match in Paris. 1932. Keystone-France/Gamma-Keystone via Getty Images
3 of 21
A circus clown falls backwards after taking a kick during a boxing match with a kangaroo. Location unspecified. 1955. Tracey/BIPs/Getty Images
4 of 21
A circus dwarf known as Six-Foot poses with a young kangaroo before a boxing match in London. 1932. Fox Photos/Stringer/Getty Images
5 of 21
A member of Sir Robert Fossett's family circus grooms the show's boxing kangaroo. Location unspecified. 1940.Felix Man/Picture Post/Getty Images
6 of 21
A kangaroo's human opponent is doubled over in pain in this UK circus match from 1936. SSPL/Getty Images
7 of 21
Heavyweight boxing legend Primo Carnera spars with Jo-Jo the kangaroo at a publicity event in Atlantic City, New Jersey. 1933. FPG/Getty Images
8 of 21
Australian artist Bill Boyd poses for a sparring match with his pet kangaroo, Kanga Joe. 1923.Wikimedia Commons
9 of 21
British boxing champion Jean Harvey spars with a kangaroo to the delight of a crowd. Location unspecified. Circa 1930. Imagno/Getty Images
10 of 21
A man boxes with a kangaroo at Australia's Taronga Park Zoo. Circa 1930.

Disturbingly enough, some zoos encouraged kangaroo boxing. Fairfax Media/Fairfax Media via Getty Images
11 of 21
A photographer takes his chances with a kangaroo named Aussie in London's Trafalgar Square. 1931. Fox Photos/Hulton Archive/Getty Images
12 of 21
This kangaroo was somebody's pet and got loose.

He broke the photographer's camera lens when the man got too close. Bettmann/Contributor/Getty Images
13 of 21
Skippy the kangaroo tries to get a leg kick in during a match with boxer Alan Minter. Location unspecified. 1978. Mirrorpix via Getty Images
14 of 21
American actor Jesse White strikes a boxing pose with a kangaroo while filming a scene for the movie The Million Dollar Mermaid. 1952.Hulton Archive/Getty Images
15 of 21
Rabbit the kangaroo aims for a powerful kick at his trainer's legs during a sparring round at a circus held in the Earl's Court. London. 1940.Hulton-Deutsch Collection/CORBIS/Corbis via Getty Images
16 of 21
A man boxes with a kangaroo in the Helidon area of Queensland, Australia. 1910. State Library of Queensland
17 of 21
A photo from the book The Babyhood of Wild Beasts, depicting a man antagonizing a kangaroo to box, 1917. Flickr/Internet Archive
18 of 21
French singer Sacha Distel spars with a kangaroo during a publicity stunt. 1978. WATFORD/Mirrorpix/Mirrorpix via Getty Images
19 of 21
Radio disc jockey Paul Gambaccini boxes a kangaroo as part of a radio show stunt with the Robert Brothers Circus. Eastbourne, England. 1980. Day/Mirrorpix/Getty Images
20 of 21
A clown boxes with a kangaroo at the Shanghai Wild Animal Park as part of their Animal Olympics event in 2006. Mark Ralston/Getty Images
21 of 21 If you've been to any sort of Australian sporting event, there's a good chance that you've seen the boxing kangaroo. Whether pictured on a flag being waved in the crowd or sold as a plush toy in the gift shop, the image of the boxing kangaroo has become a national symbol.

This image has been around since the latter part of the 19th century and while it's now a beloved symbol of Aussie pride, its origins aren't exactly the sort of thing to boast about. The "boxing kangaroo" is exactly what it sounds like, a kangaroo wearing boxing gloves, hopping around, and throwing jabs -- all while in the ring with a human male boxer nonetheless.

The idea of a kangaroo boxing with a man grew out of little more than humans seeing the kangaroo's natural defense posture against other male kangaroos and finding a way to capitalize on it. While in the wild the kangaroo uses the claws at the end of its legs to inflict powerful kicks, the animal first grapples with and jabs at its opponent, much like a boxer would. Thus, somebody once thought, "Hey, let's put boxing gloves on this creature."

The earliest reports of kangaroo boxing date back to the early 1890s with a kangaroo named Jack being forced to wear a pair of boxing gloves and spar with a man known as Professor Lindermann at the Melbourne Waxworks in Australia. The stunt soon became a regular event at traveling shows around the country and it wasn't long before it gained popularity in the United States.

In what is possibly now a sore spot for the Philadelphia Zoo, the first reports of kangaroo boxing in the U.S., which broke right around the time they did in Australia speak of a kangaroo named John L. who would spar with his trainer. While an 1891 article describes the spectacle as simply play between the kangaroo and its handler, more exploitative matches soon followed.

Kangaroo boxing soon became a popular form of entertainment in circuses and traveling sideshows both in the United States and Europe. Clowns and even professional boxers would go toe-to-toe with the kangaroos, at times throwing actual punches that would indeed connect. While the "sport" eventually waned in popularity, it hung around long enough to find its way into pop culture, such as 1978's Matilda -- a movie wholly about kangaroo boxing.

While there are still occasional instances of kangaroos squaring off with humans in the boxing ring, thankfully, the practice has for the most part been laid to rest.

Now that you've learned all about kangaroo boxing, take a look back at the odd, forgotten sport of diving horses. Then, read up on the some of the most truly weird Olympic sports of decades past.