The Unexpected And Brutal History Behind Women’s Boxing 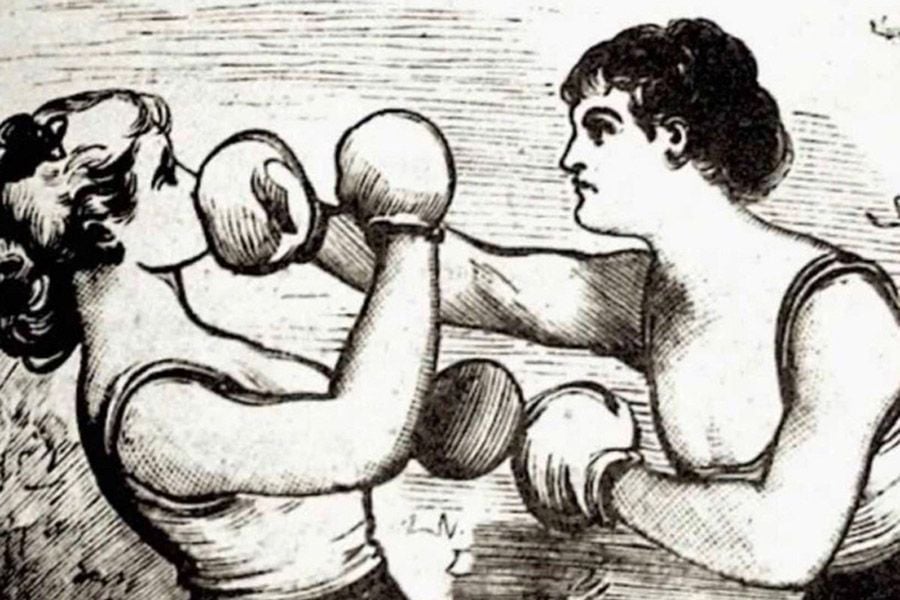 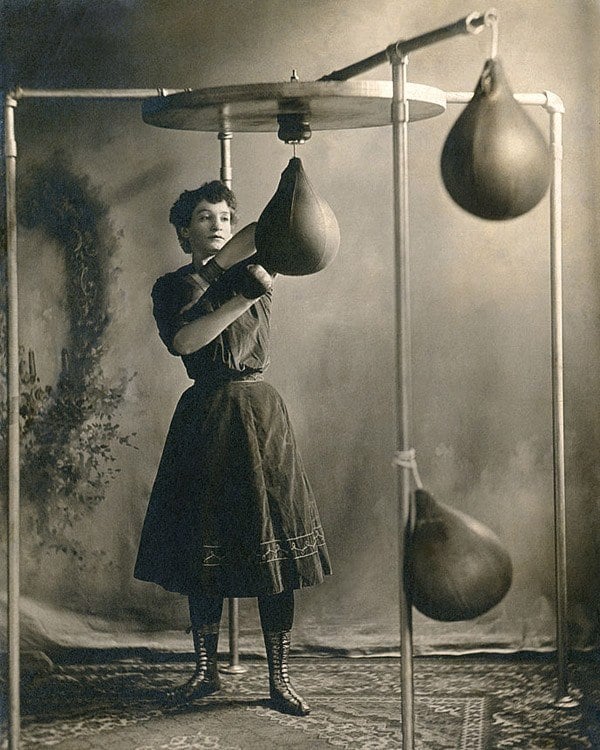 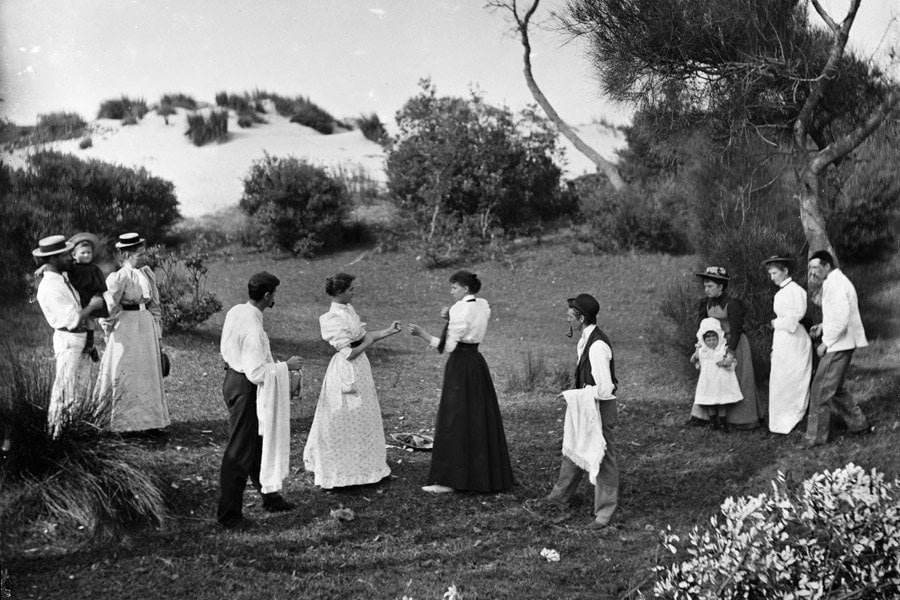 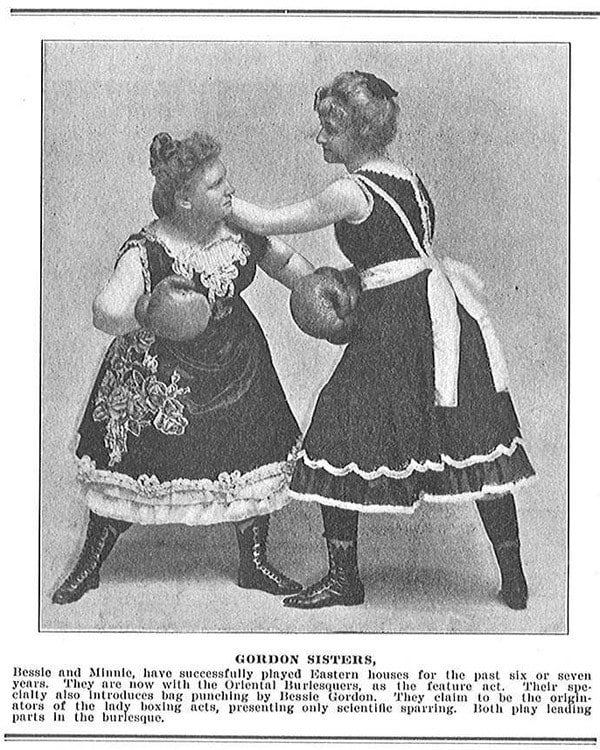 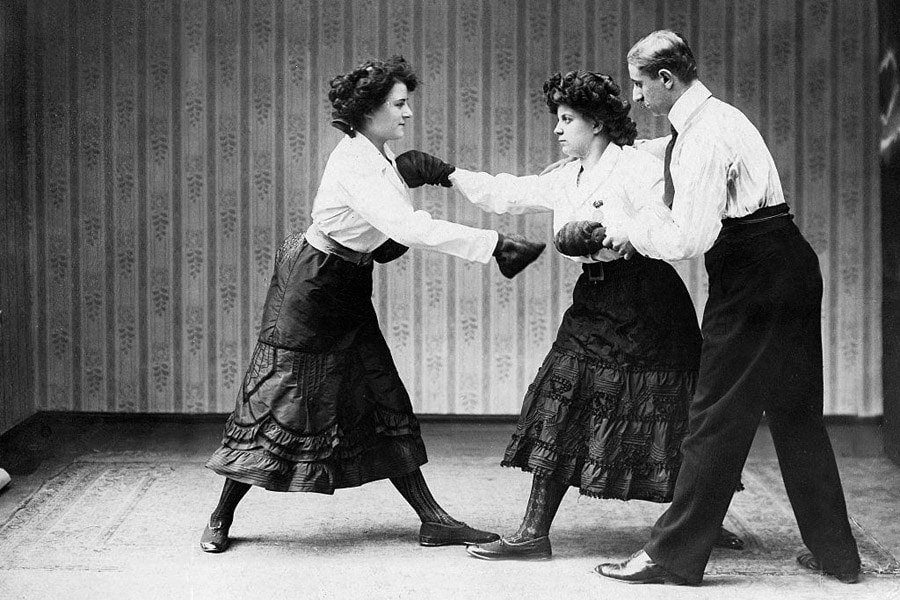 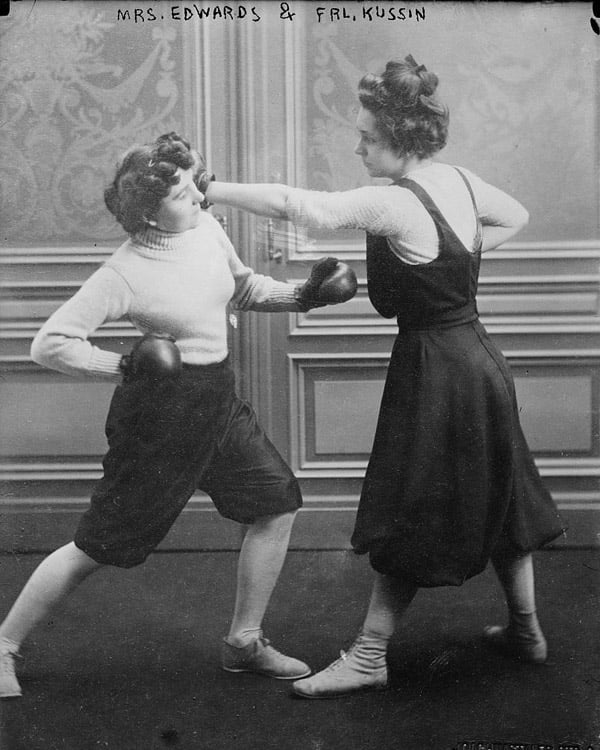 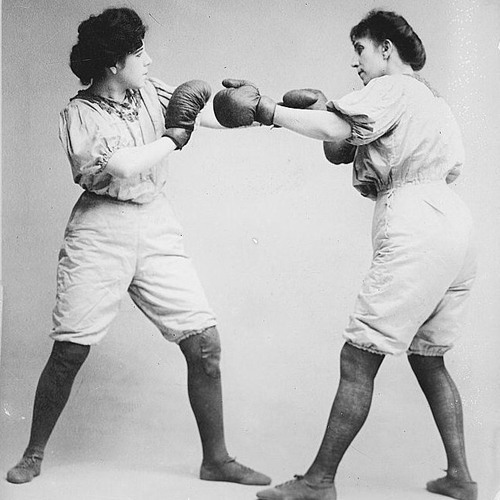 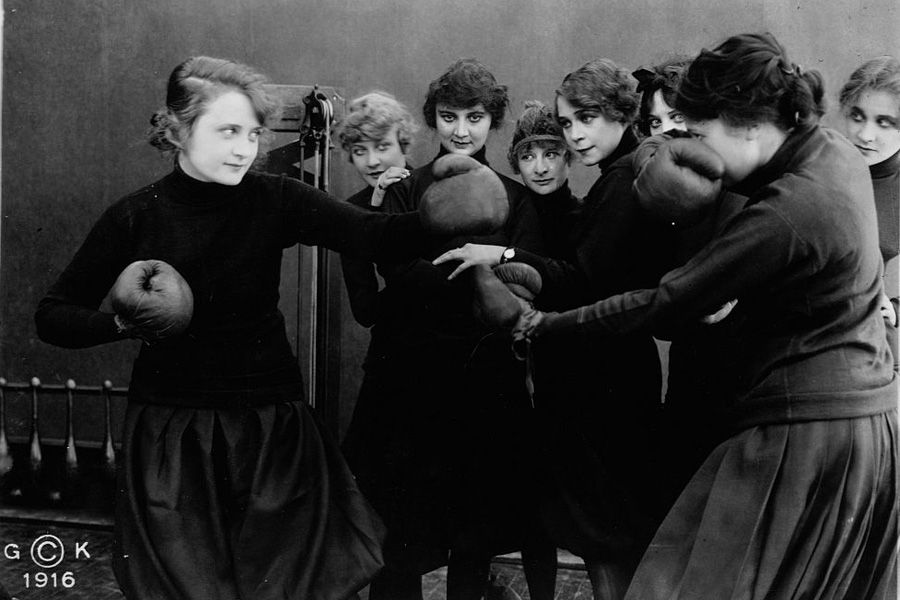 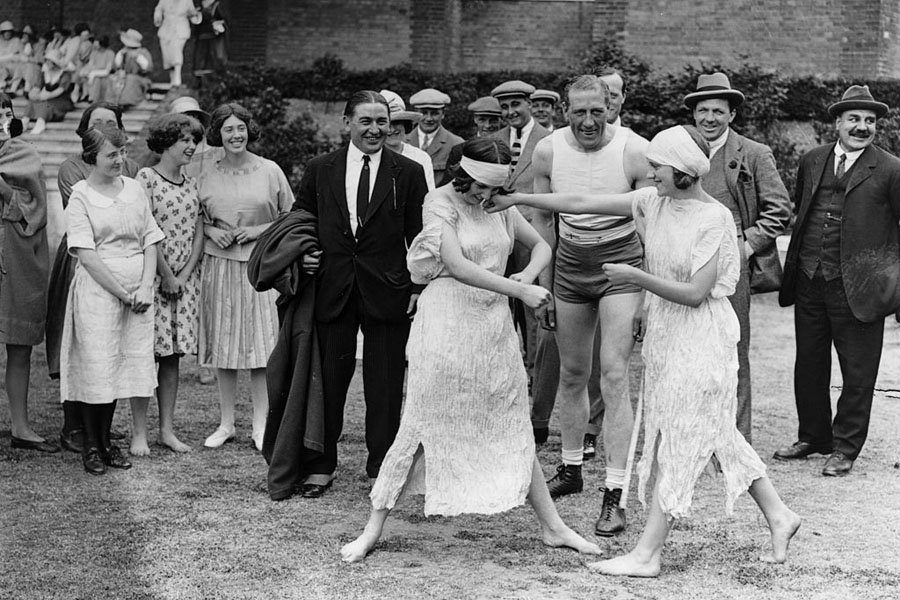 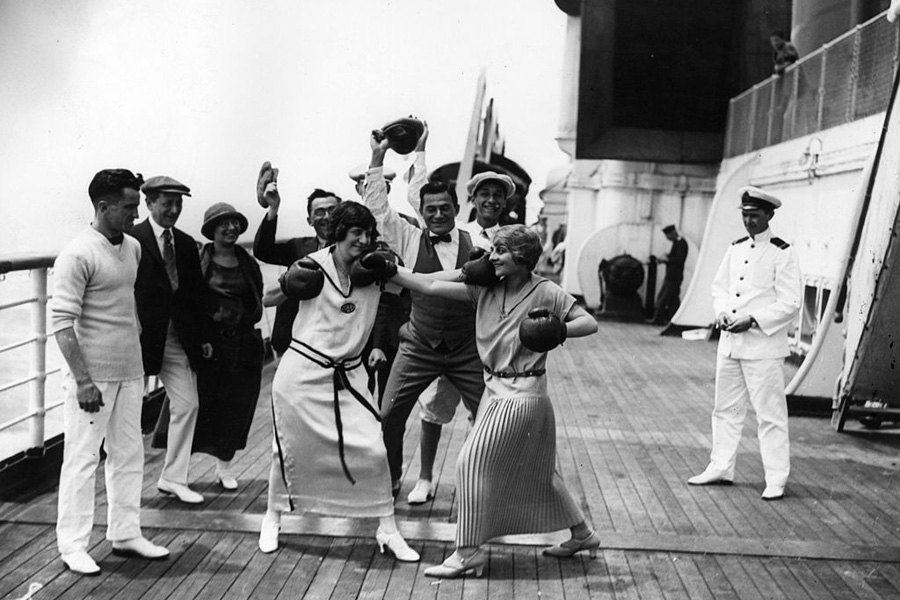 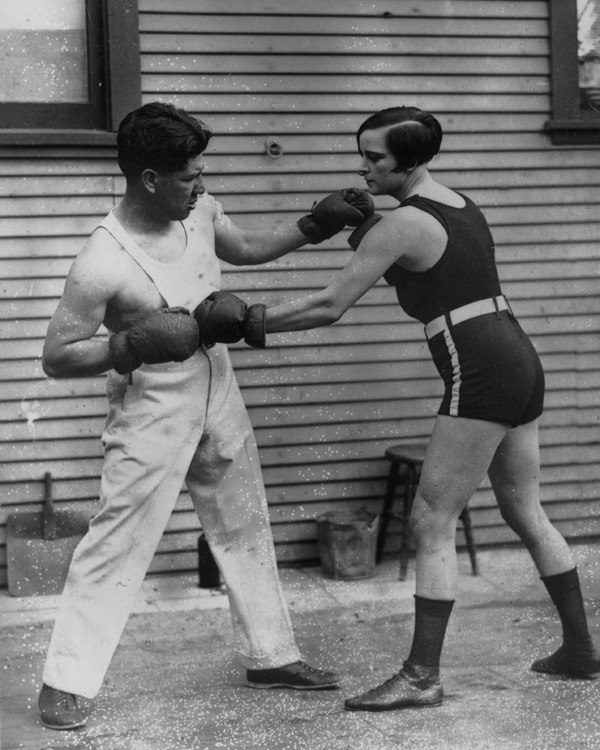 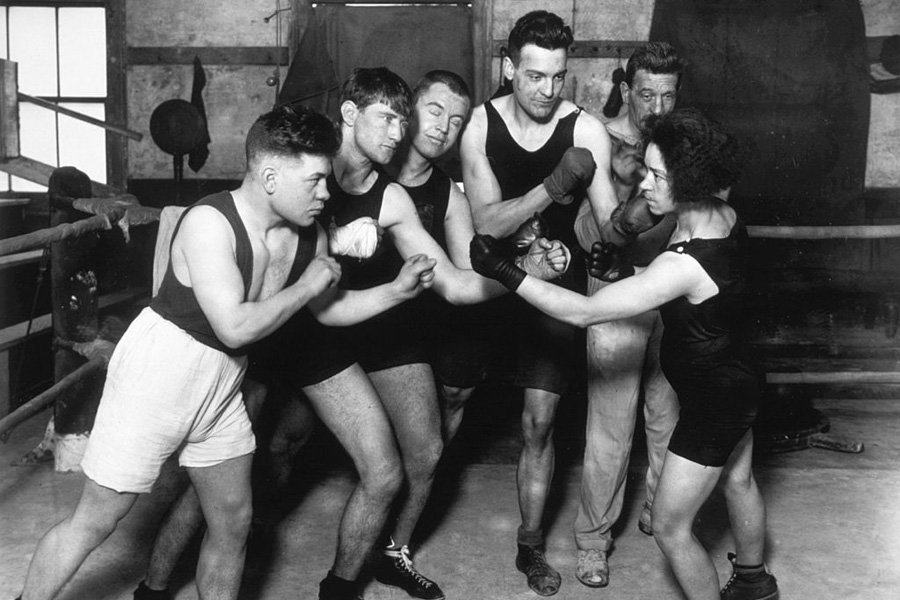 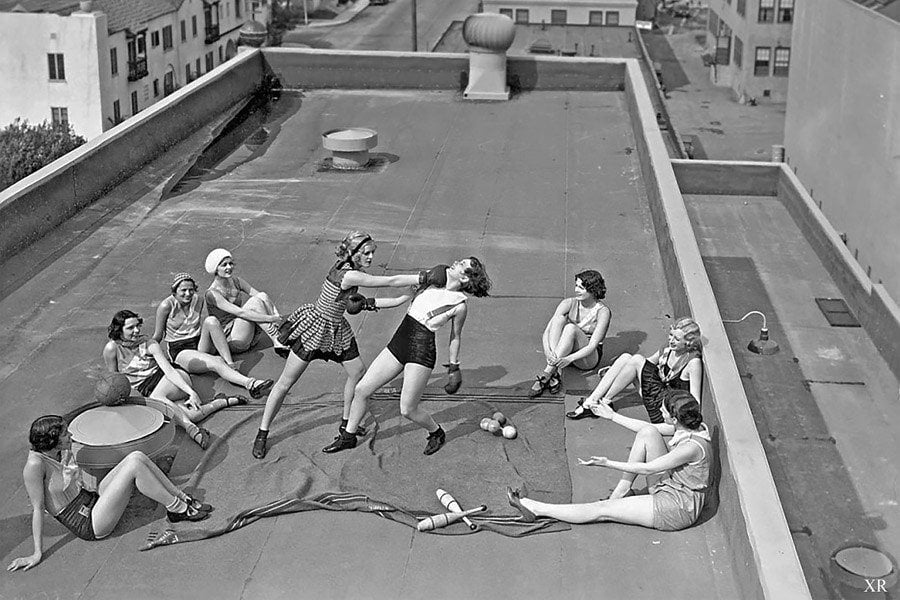 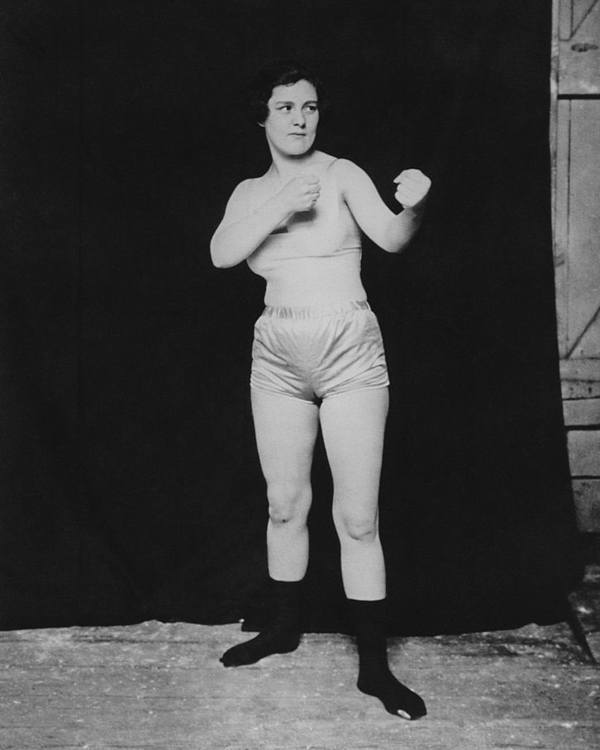 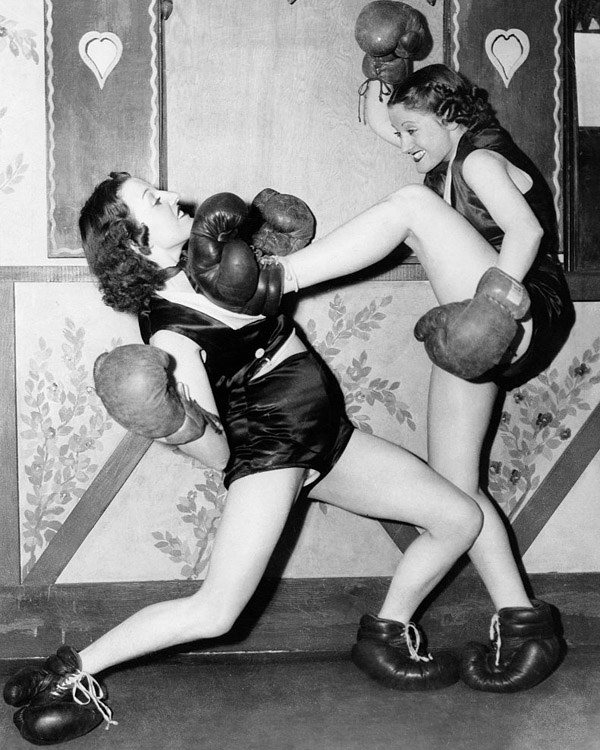 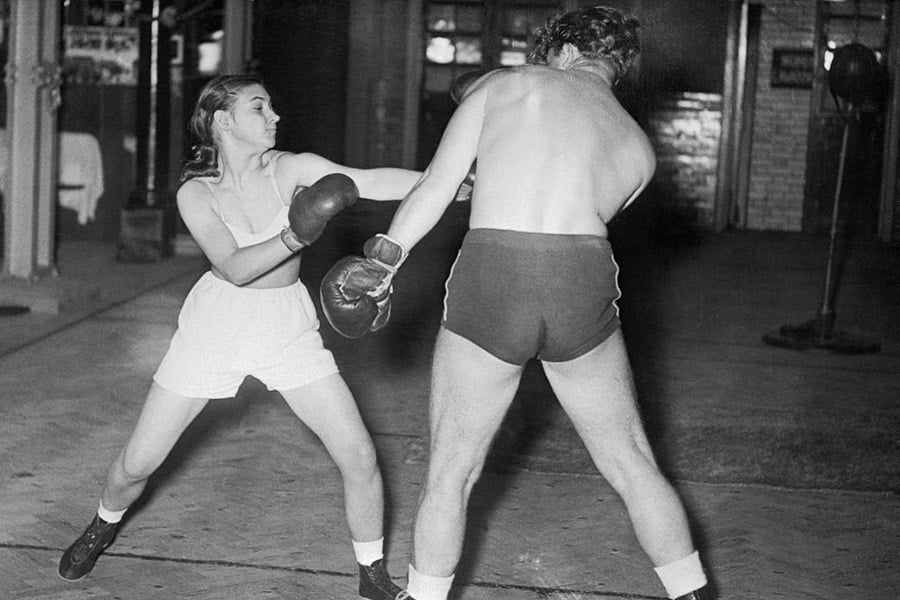 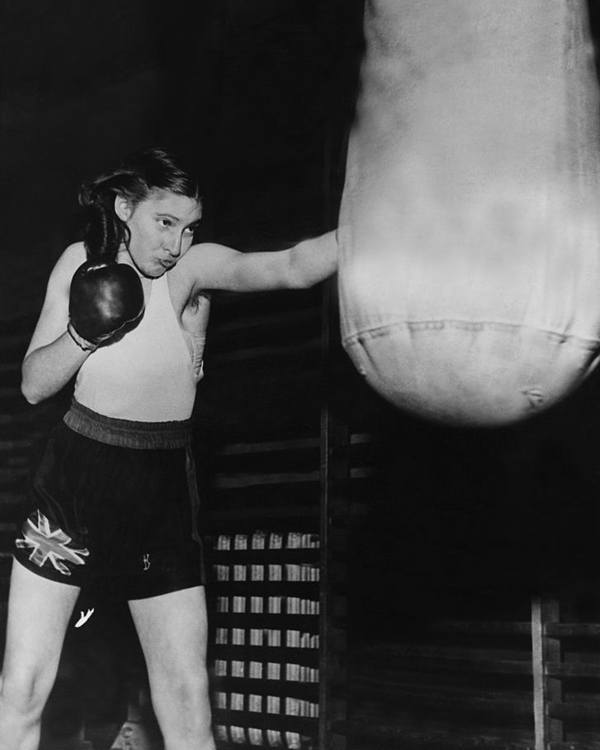 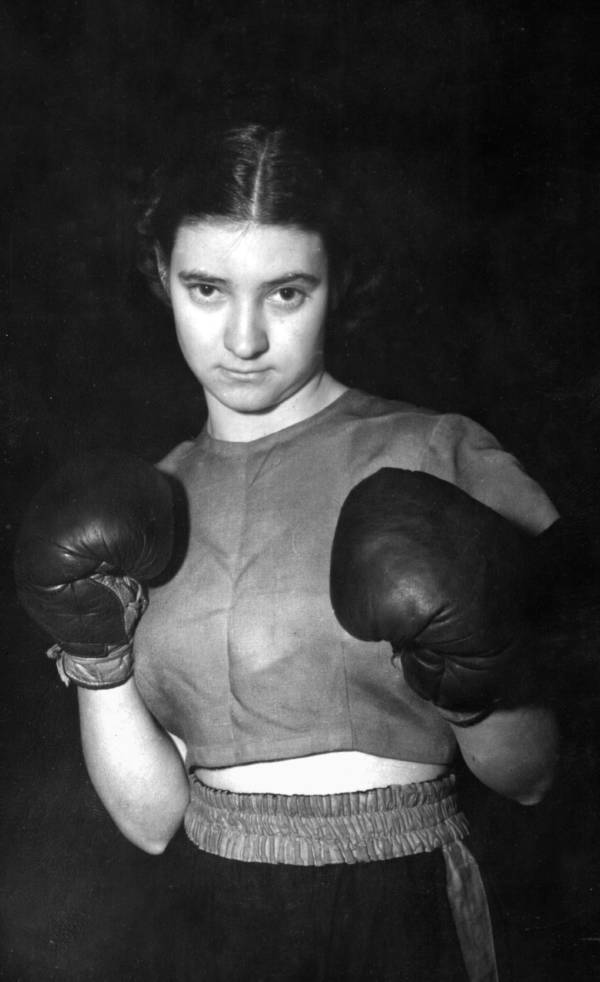 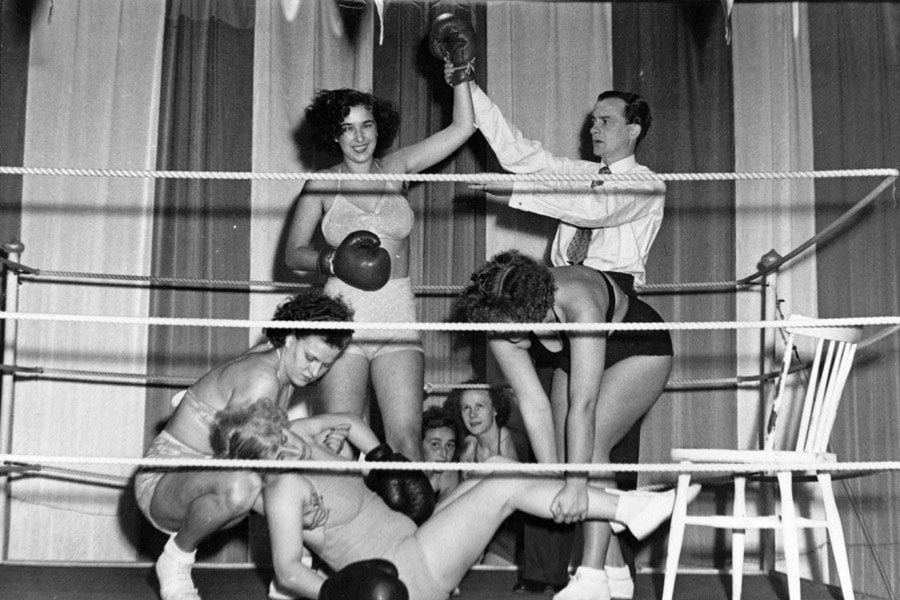 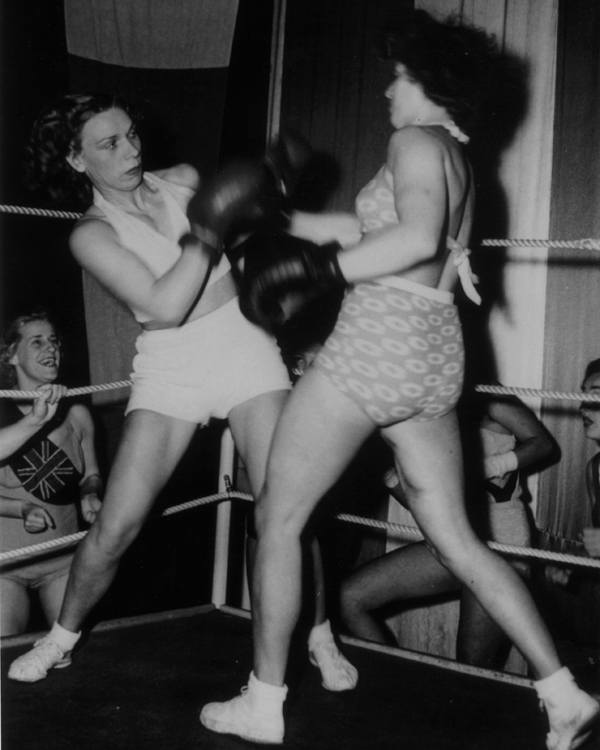 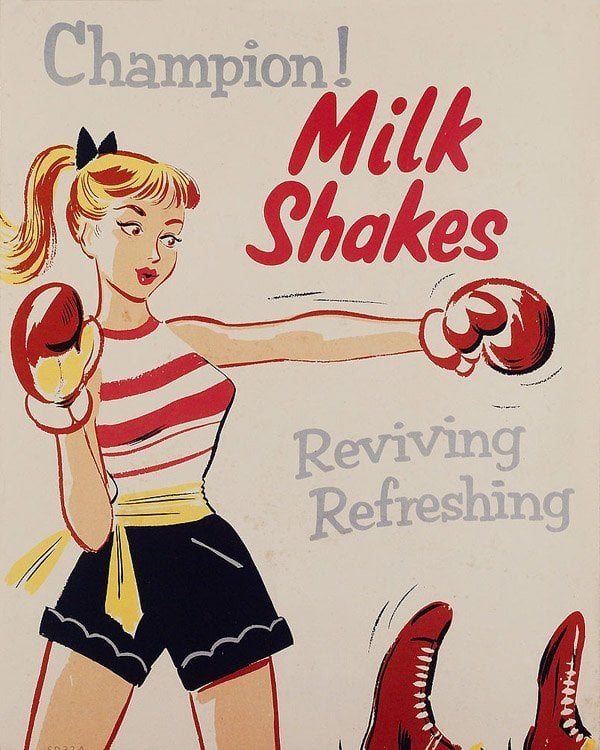 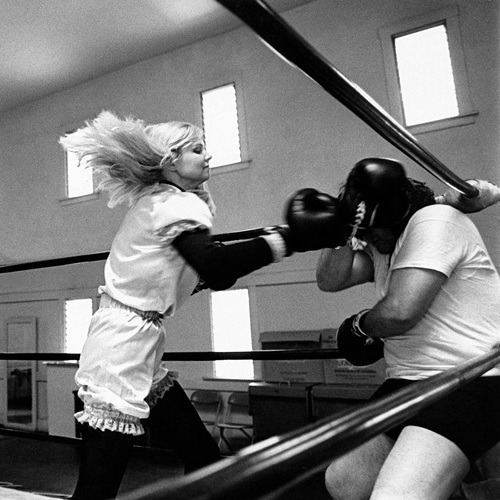 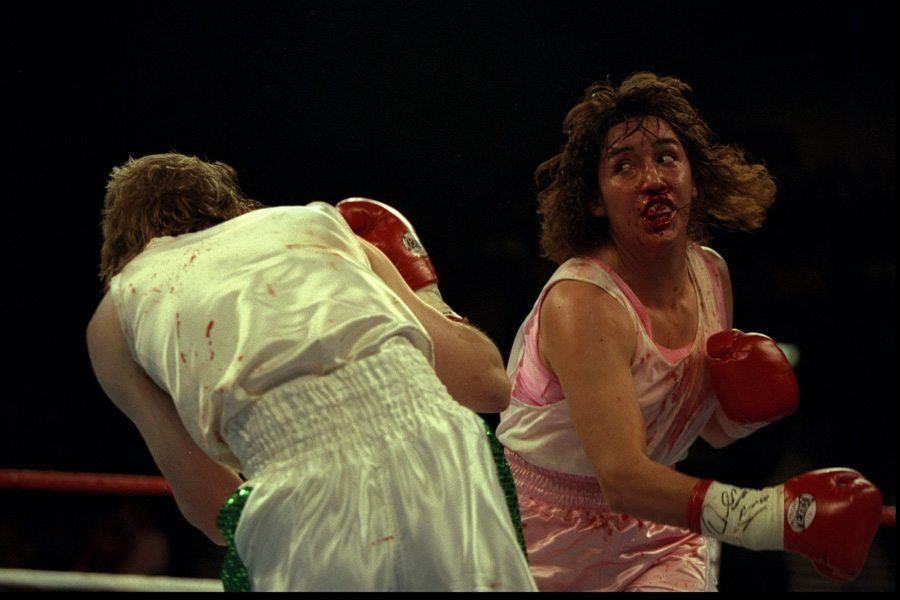 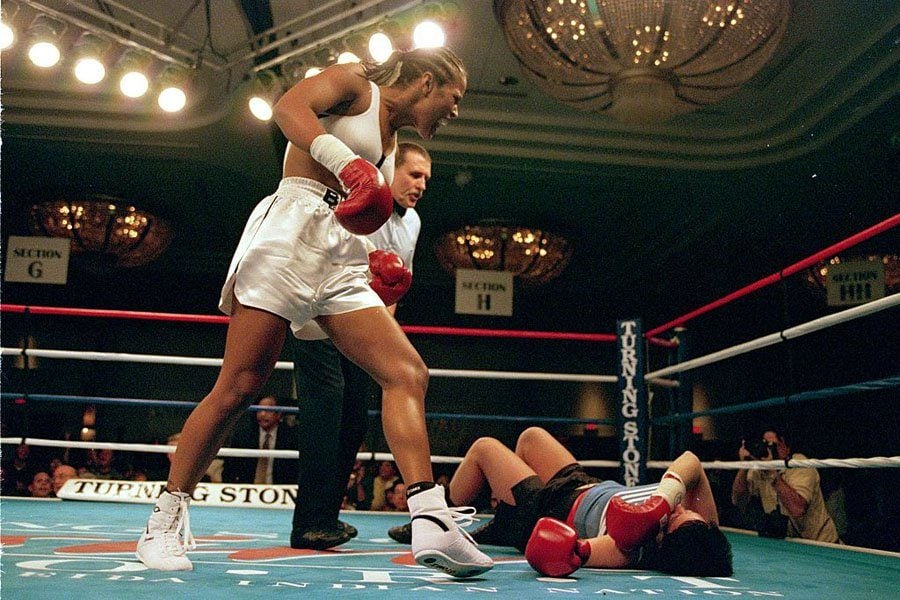 1 of 25
Known as the "European Championess," Elizabeth Wilkinson enjoyed a six-year career as boxer. For her final bout, she was paid ten pounds, a healthy sum in 1728.VICE
2 of 25
A woman trains with gloves and bags in 1890.Underwood Archives/Getty Images
3 of 25
Two women pose in a boxing stance, circa 1900. Women's boxing at this time was more a choreographed affair featuring only some light punches — to better align it with Victorian sensibilities.Flickr/Powerhouse_museum
4 of 25
A photo of the Gordon sisters from The New York Clipper, November 15, 1902. The fighting sisters were featured in a short silent film directed by Thomas Edison called The Gordon Sisters Boxing.Library of Congress
5 of 25
Two women train at a boxing school in Berlin, Germany, circa 1909.ullstein bild/ullstein bild via Getty Images
6 of 25
Boxers Rose Edwards (left) and Fraulein Kussin (right) trade punches on March 7, 1912.PhotoQuest/Getty Images
7 of 25
The Bennett sisters were both boxers and wrestlers. This photo is thought to be from their vaudeville act, circa 1910-1915.Wikimedia Commons
8 of 25
In this still from the film Gloria's Romance, actress Billie Burke (left) boxes with several other woman in a gymnasium, circa 1916.Library of Congress/Corbis/VCG via Getty Images
9 of 25
A crowd of onlookers, including English boxer Bombardier Billy Wells (between the two contestants), watch two women box at a garden fete in Hampstead, north London, 1922. Topical Press Agency/Getty Images
10 of 25
Two women passengers box aboard the Cunard liner Berengaria, watched by fellow passengers and an officer. 1923. Topical Press Agency/Getty Images
11 of 25
American boxer Joe Rivers spars with Louise Adler, the women's lightweight champion of the world, during a training session before she defends her title. 1926. Topical Press Agency/Getty Images
12 of 25
Female boxer Annie Newton poses in a face-off with five men. In 1925, Newton took part in a boxing tournament in Edmonton in which she sparred with three different men, giving them two rounds each.Fox Photos/Getty Images
13 of 25
This photo from Sports Illustrated depicts women's rooftop boxing, popular in California in the 1930s.Flickr/x-ray_delta_one
14 of 25
A young female boxer poses in the upright stance, circa 1935. General Photographic Agency/Hulton Archive/Getty Images
15 of 25
Two women spar with boxing gloves on their hands and feet in a New York nightclub, circa 1938. ullstein bild/ullstein bild via Getty Images
16 of 25
[Original Caption] "A shorthand typist by day, Barbara Buttrick is a short jab artist by night when she takes her lessons. Blonde 19 year old Barbara came to London from Hull, full of the ambition to be a boxer. She went to Wally May, famed trainer of professionals, and told him her problem. He was skeptical, but he tried her out with the mitts. Now he's enthusiastic about the 'lady leather-pusher.' She intends to start a boxing club for women and is drawing up a special set of rules." 1948.Bettmann/Getty Images
17 of 25
Barbara Buttrick trains with a sand bag in 1948. Keystone-France/Gamma-Keystone via Getty Images
18 of 25
Barbara Buttrick poses during training at London's Mayfair Gym on February 4, 1949.Allsport Hulton/Archive/Getty Images
19 of 25
The Italian women's boxing champion celebrates after knocking out the London champion during an international match in Stockholm, Sweden, 1952. Keystone/Getty Images
20 of 25
Two women boxing circa 1955. Three Lions/Getty Images
21 of 25
Poster promoting milk for energy and health, showing a young woman who has just knocked out her adversary. Circa 1955-1960.SSPL/Getty Images
22 of 25
A female boxer pummels her sparring partner, who she has backed into a corner, circa 1969.Underwood Archives/Getty Images
23 of 25
Christy Martin (right) lands a blow on Deidre Gogarty during a bout in Las Vegas, Nevada on March 16, 1996. This fight was shown on cable TV, prior to a Mike Tyson bout. Martin won the fight with a decision in the sixth round, and appeared on the cover of Sports Illustrated shortly after.Al Bello/Allsport/Getty Images
24 of 25
Laila Ali, daughter of professional boxer Muhammed Ali, dances over April Fowler as she lays on the canvas during a fight at Turning Stone Casino in Verona, New York on Oct. 8, 1999. Ali defeated Fowler by a KO in the first round. Al Bello/Allsport/Getty Images
25 of 25 The Unexpected And Brutal History Behind Women’s Boxing
View Gallery

Though women’s boxing still struggles to break into the mainstream, there is a long and storied history of female involvement in the sport.

The evolution of gender equality in boxing went way backward before its slow climb forward. The early 1700s had raw British female fighters like Elizabeth Wilkinson boxing other women (and even men) in bare-chested, bare-knuckle style brawls. There were no “rounds," weight classes, or low blows. There were essentially no rules at all. Women engaged in bloody prize fights, mixed pair boxing, and even matches involving cudgels or small swords.

It wasn’t until the early 1800s that boxing — though illegal through most of the 19th century — gained respectability and popularity in Europe. Unfortunately, this coincided with the British Evangelical Christian movement, which labeled women’s involvement in the sport an abomination. Relegated to sideshow “performances” and nightclub acts, the female athletes now existed to entertain men on a sensationalist level.

Women’s boxing as a sport thus continued under the radar — to a point. In the United States, the first women’s world championship match occurred in 1888 in New York. Fighters Hattie Leslie and Alice Leary endured a brutal fight that ended in black eyes. They also endured limitless disdain and ridicule from the press. The New York Herald vilified and objectified the boxers in the coverage of the event.

Such uproar occurred that both Leary and Leslie (the champion), Leslie's husband, and several other men involved were arrested and indicted. The charges included “aiding and abetting a prize fight” — though a fight like this between men was commonplace.

Not long after, women's boxing did appear at the 1904 Olympic Games in St. Louis — but only as a demonstration bout.

Women fighters battled for equality in the sport for years. It wasn't until 1975 that Caroline Svendsen became the first woman to receive a boxing license in the United States.

Even now, however, women’s boxing does not enjoy the respect that the men’s division receives or the popularity of modern MMA matches. The Olympic committee didn't reinstate women's boxing as an Olympic sport again until 2012.

Here’s to the women — past and present — who continue to step into the ring.

Next, meet the suffragettes who defended women’s rights with jujutsu. Then, discover the five most bad ass women of the Civil War.