"These babies are from a really important point in the evolutionary tree. They had a lot of features similar to modern mammals, features that are relevant in understanding mammalian evolution."

Eva Hoffman / The University of Texas at AustinA drawing of the cynodont with her babies.

Roughly 185 million years ago an ancient mammal relative gave birth to dozens of babies. Now the discovery of their bones is helping scientists to unlock the mysteries that surround mammal evolution.

When the fossils were first discovered in a rock formation more than 18 years ago in Arizona, the team originally thought there was only one specimen embedded inside. Luckily, one graduate student noticed a speck of tooth enamel in the rock a decade later.

A CT scan was performed on the slab and revealed that it contained a handful of bones. A few years later, advances in CT technology allowed the researchers to discover the full scope of what was truly inside: the skulls of 38 mammal-related babies.

According to a recent study published in the journal Nature, the fossils of the beagle-sized, Jurassic-era mom and her 38 babies are shedding light on the transition between reptiles and mammals in evolution.

The animal, known as Kayentatherium wellesi, was a species of Jurassic-era mammal relative which are called cynodonts. According to a news release, these are the only fossils of babies belonging to a mammal precursor ever discovered. 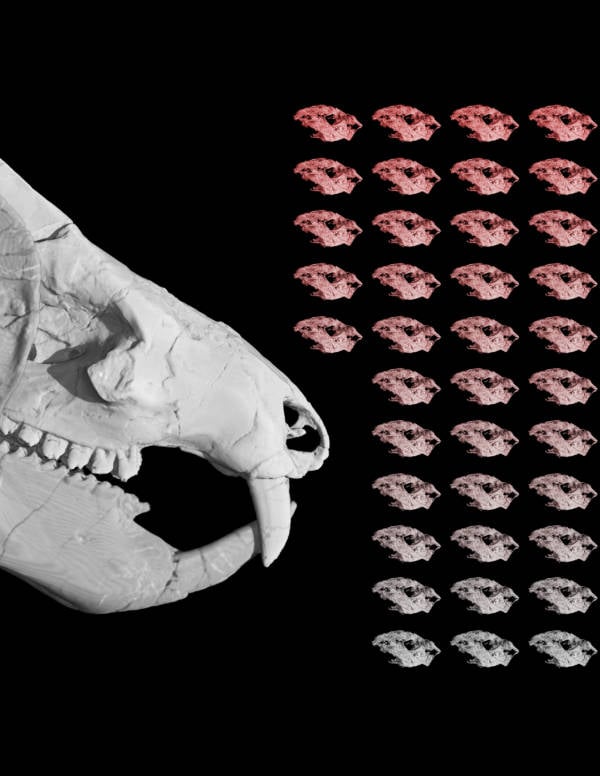 Eva Hoffman / The University of Texas at AustinA figure representing the 38 Kayentatherium babies found with an adult specimen.

This discovery is particularly important in regards to understanding the evolution of mammals. The mother had an impressive litter of 38 babies, which is twice the average litter size of any living mammal. This led researchers to believe that the Kayentatherium reproduced in a way more similar to reptiles, despite being a mammal predecessor.

“These babies are from a really important point in the evolutionary tree,” Eva Hoffman, the research lead on the project and a graduate student at the University of Texas’ School of Geosciences said in the release. “They had a lot of features similar to modern mammals, features that are relevant in understanding mammalian evolution.”

Each of the babies had very small brains, their skulls were only one centimeter long, and that fact coupled with their mother’s large litter size supports the idea that as mammals evolved, they gave up large litter sizes in favor of larger brains.

No eggshells were found amongst the babies’ bones, but the researchers believe that they were either developing inside of eggs when they died or had just hatched. 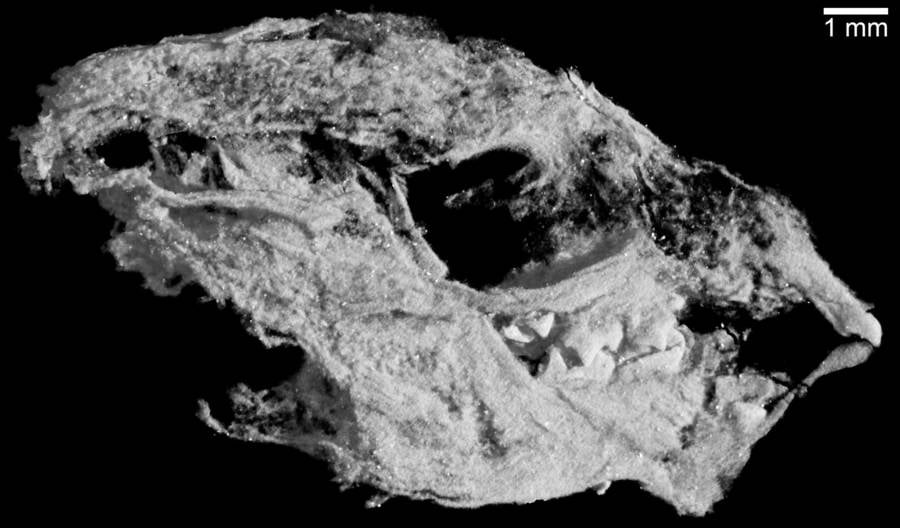 Eva Hoffman / The University of Texas at AustinThe skull of a baby Kayentatherium. It is about 1 centimeter long.

The discovery has consequently helped researchers to construct a more accurate timeline of mammal evolution.

Because this cynodont had such a large litter and her babies had tiny brains, the researchers could conclude that mammals in the Jurassic period had not yet evolved into mammals as we now know them— with smaller litters and larger brains. It can be surmised then, that this evolution did not take place until a few million years later.

“Our reproductive biology is such a central component to being mammal,” Greg Wilson, an associate professor of biology and curator of vertebrate paleontology at the Burke Museum of Natural History and Culture reported. “This fossil gives us a snapshot of the reproductive biology of an animal that was not quite mammalian yet. It gives us a window into the transition from what it means to be reptile to what it means to be mammalian.”

In essence, the find provides a missing link between mammalian and reptilian evolution. What’s more, from these mammalian ancestors we can also get a better picture of our own human evolution.

Next, check out this human-sized dinosaur footprint which is the largest ever found. Then read the story of how the scientist who inspired Jurassic Park found a 30-million-year-old tick with monkey blood inside.