Photo Of The Day: How 41 Ku Klux Klan Members Ended Up On A Ferris Wheel

The Ku Klux Klan lived a much different life in the 1920s, apparently a life that involved riding Colorado's amusement park Ferris wheels. 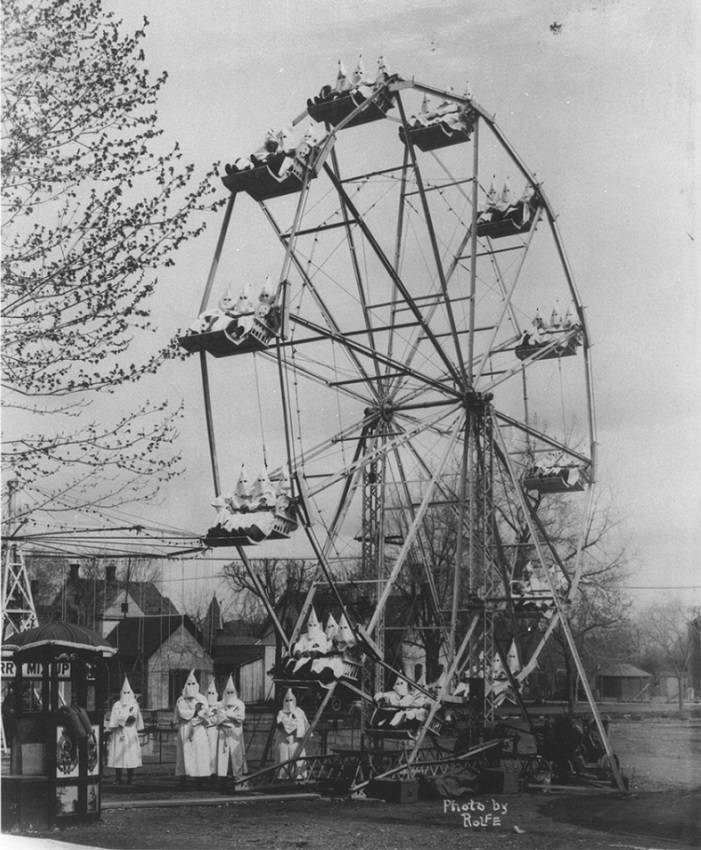 Although practically an underground movement these days, America’s most infamous hate group was surprisingly open and widespread during the group’s peak in the early and mid-20th century. More than 4 million people across the country were KKK members in the 1920s, and the 1924 Democratic National Convention very nearly chose a known Klansman as their presidential candidate.

So it wasn’t much of a surprise to the people of Cañon City, Colorado, when the local paper ran a headline declaring “Klansmen pose for picture on merry-go-round” in 1926. However, that photo (above) wasn’t actually printed along with the headline (the photographer didn’t share it). But when the photo came to light more than 65 years later, it served as a stark reminder of a history many people would like to forget.

To understand how a picture of 41 blasé Klansmen on a Ferris wheel came to be, you first have to understand the background of the KKK in Colorado. Cañon City was the Klan capital of the State from 1924 to 1928: Colorado Governor Clarence Morley was a Klansman, Colorado Senator Rice Means was endorsed by the KKK, Denver Mayor Benjamin Stapleton was connected with the Klan, and the Grand Dragon of the Colorado Klan, Reverend Fred Arnold, was the minister of Cañon City’s First Baptist Church.

Therefore, when the Klansmen of Cañon City Local Chapter 21 were asked to publicly pose at the local amusement park, no one thought much about it. Both William Forsythe, the owner of the park, and Clinton Rolfe, the photographer, were Klan sympathizers.

Although Rolfe didn’t distribute the photo to the hometown newspaper, it is likely that he gave a copy to the men seen in the photo. The picture stayed with those men alone until one of their families donated a copy to the Royal Gorge Museum & History Center in 1991.

By the time the photo started making rounds on the internet in 2003, the power of the KKK was dramatically reduced from its heyday in the 1920s. Today, membership estimates are as low as 3,000 to 5,000, and most members are relegated to the Deep South. Photos like this, however, remind people that hate groups in the United States have a frustratingly long history.

For more information about the KKK’s position in American history, find out which famous KKK members once helped lead this country and see the Ku Klux Klan march on Washington that brought 60,000 members to the White House.