At one point, over 1,000 people called Kolmanskop home, and participated in its booming industry – until everyone left. 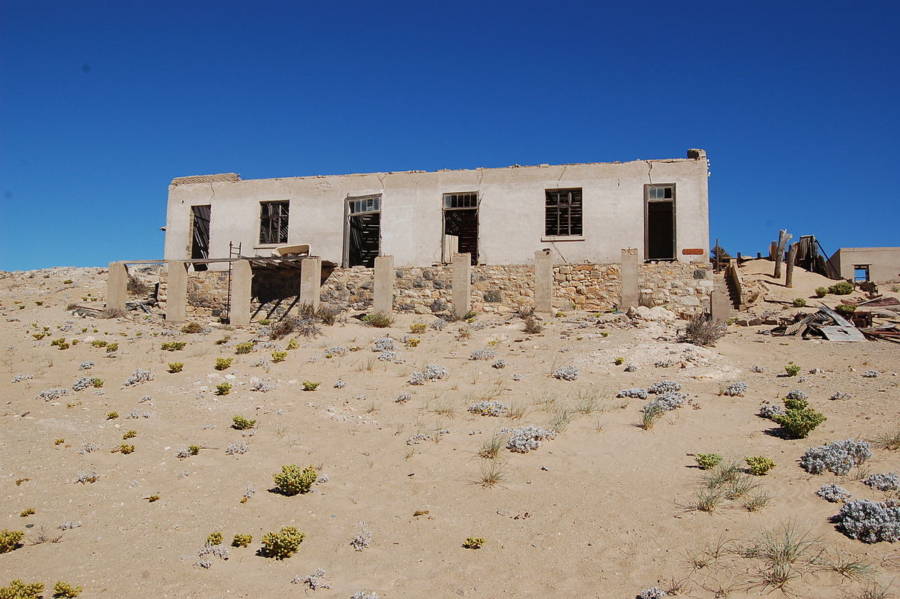 WikimediaThe town of Kolmanskop is hardly recognizable after the desert swept in.

Zacharias Lewala was working as a railway laborer in the harsh edges of the Namib desert in South-Western Africa. The region was 530 miles southwest of Windhoek, the capital of Namibia, in a harsh and arid desert area that is now known as the “Sperrgebiet”, or Forbidden Zone.

In 1908, while digging on the railway’s tracks, Lewala stumbled upon a shiny object, which he brought to his boss, the former De Beers head named August Stauch. He recognized it for what it was: a diamond. The news that diamonds could be found in this lonely, desolate region that was then known as German South West Africa sparked a mad frenzy towards the area, as miners and laborers rushed to claim their spot and make their fortune. 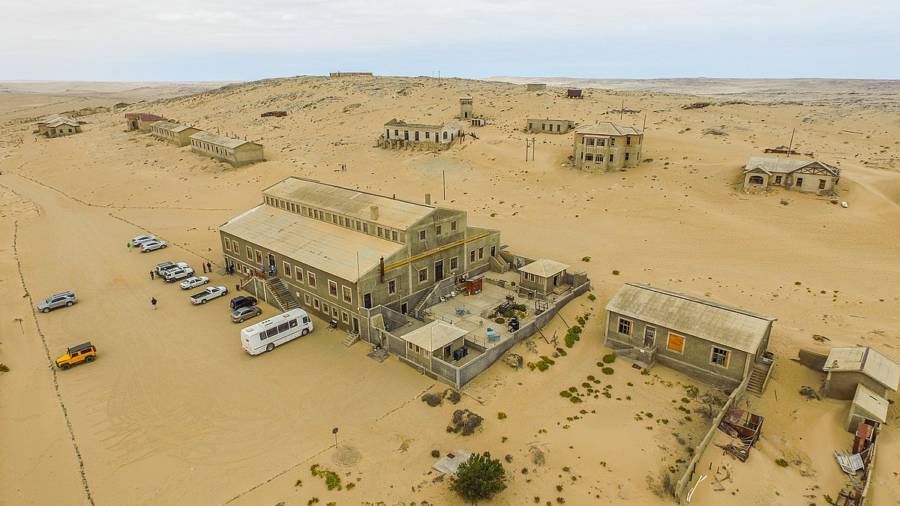 WikimediaAn aerial view of the town of Kolmanskop.

The town’s new inhabitants were not deterred by the inhospitable climate. Rather, motivated by their newly discovered wealth, they were determined to give this town every comfort and luxury they were accustomed to having in their hometowns.

They built up a pub, German-style homes, a hospital, theatre, and school, adding all of the amenities that made it an almost exact replica of a traditional German town in the middle of the Namib Desert. But they went even further, also building a magnificent concert hall, where they flew in opera singers and orchestras to perform from all over the world, in addition to a movie theater, skittle hall, and casino.

It had the first X-Ray machine in the entirety of the southern hemisphere, although it was not just used for medical purposes. It was also used to help detect diamond theft. By all accounts, it was a thriving town for the next twenty years, the diamond industry flourished in the area.

Prospectors discovered over one million carats of diamonds, making Kolmanskop the richest diamond producer in the world. When it reached its peak diamond production in the 1920s, the town produced 11.7 percent of the world’s diamonds and had 1,300 inhabitants. 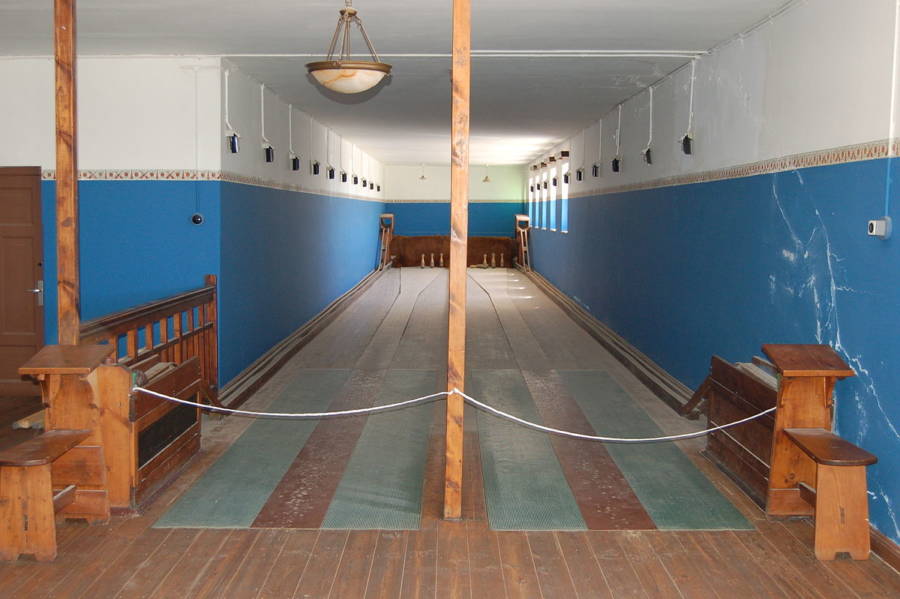 WikimediaA bowling alley, in one of the abandoned buildings.

The Town Goes Under

However, World War I brought diamond production to a halt, as prices of diamonds fell in the wake of the war. Even after the war, the town was never able to return to its former glory. In the 1930s, once mining resumed, the rich diamond deposits in the area began to deplete. The number of occupants dwindled, as families left one by one to seek their fortunes elsewhere.

The final nail in the coffin of the town was the discovery of another diamond deposit on the coastal of the Orange River, over 160 miles south of the Kolmanskop, which would soon surpass it as the world’s richest. The miners abandoned Kolmanskop in favor of the rich mining on the coast. The town was dwindling, but it hung on throughout the 30s and 40s serving as a supply depot for a diamond mine on the Orange River and others in the surrounding area. 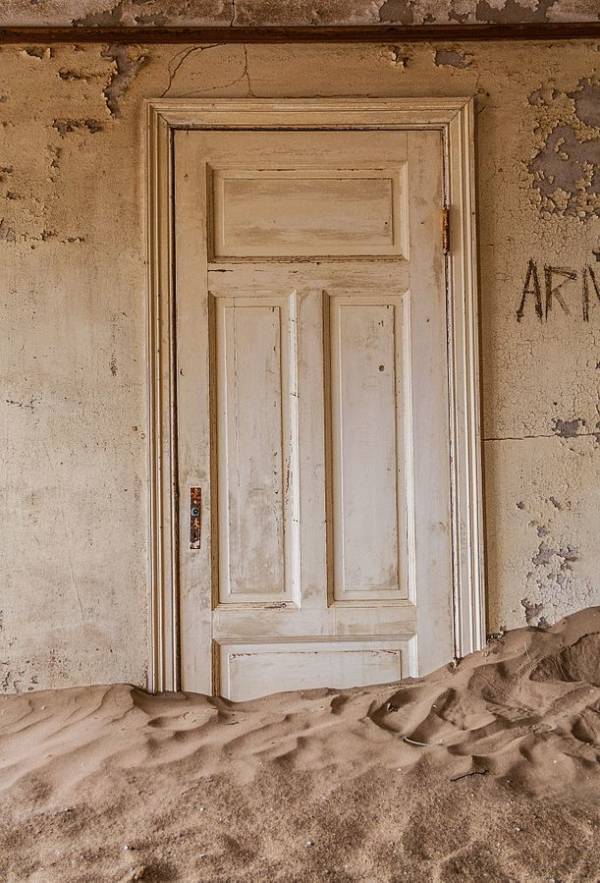 WikimediaSand blocks a doorway in one of the homes in Kolmanskop.

However, even that wasn’t enough to keep the town alive, and even the inhabitants that had hung on for that long began to depart the area. The very last family left Kolmanskop in 1956, leaving the town completely abandoned.

Now, the town sits empty, with the exception of the few tourists that come through the Namib desert to see what happens when nature totally reclaims a town that has long been abandoned by its inhabitants. Even the tourists are few and far between since the abandoned town sits in the Sperrgebiet, which requires all visitors to obtain a permit before they are able to visit the abandoned town.

With very few humans passing through, the desert has almost completely taken over the area. Piles of desert sand sit in the now-abandoned buildings, leaving little indication that this was once the home of a wealthy, thriving town.

After learning about Kolmanskop, the abandoned Nambian diamond town, check out the Aral Sea, which was once a desert oasis, and is now just a desert. Then, take a look at these photos of Salton Sea, California’s ghost town.