Unraveling The Deadly Legend Of The Pacific’s Own Bermuda Triangle

The sea is basically the Pacific version of the Bermuda Triangle, complete with mysterious disappearances, sea monster sightings, and ship sinkings. 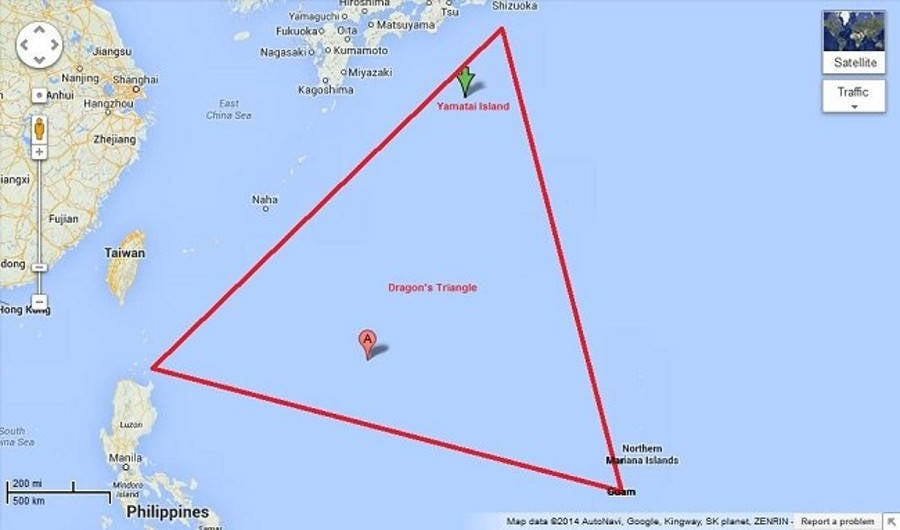 MarineInsight.com A map of the Dragon’s Triangle, also known as the Devil’s Sea, south of Japan.

Kublai Khan never saw it coming, but two storms in 1281 supposedly protected Japan from being conquered by Mongol hordes.

The Japanese legend says that kamikaze, or “divine winds” called upon by the emperor of Japan, sank a fleet of 900 Mongol ships carrying 40,000 soldiers. The fleet left from mainland China, and it was supposed to meet a southern fleet of 100,000 troops to overwhelm Japanese defenders.

Instead, Kublai Khan’s forces fought to a stalemate after 50 days, and the Japanese repelled the invaders when Khan’s forces retreated and many soldiers deserted.

Recent scientific studies show that a typhoon wiped out Khan’s northern fleet before it entered Japanese waters. The invasion centered on Kyushu, the southernmost of Japan’s major islands and the western edge of what is known as the Dragon’s Triangle, Devil’s Triangle or the Devil’s Sea. 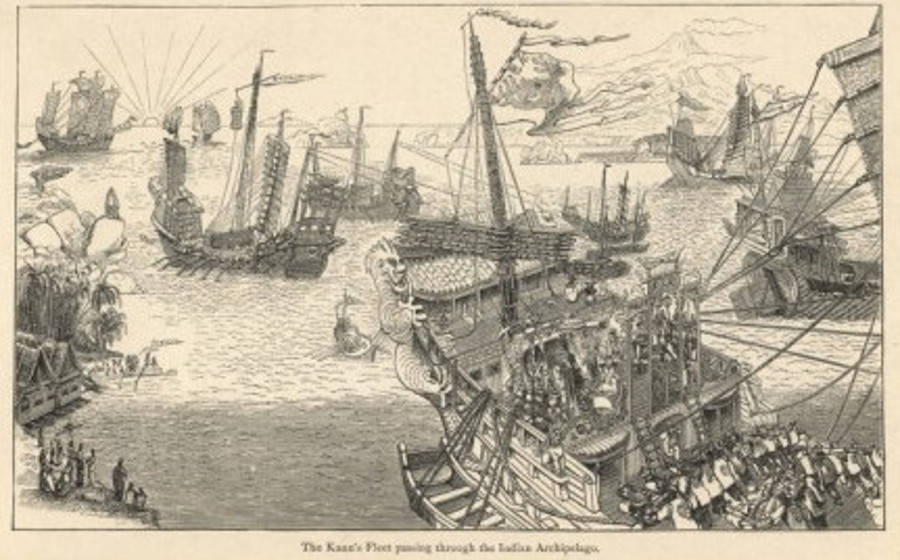 Wikimedia Commons An illustration of Kublai Khan’s fleet on its way to Japan.

The area stretches from the Japanese island of Miyake to the Bonin Islands to the south-southeast. The western portion of the Devil’s Sea goes from Taiwan up to Miyake. Much of the triangle encompasses the Philippine Sea south of Japan.

Many people compare the Devil’s Sea to the Bermuda Triangle in terms of strange occurrences that happen there.

Kublai Khan’s typhoon likely came from Philippine Sea; the loss of the Khan’s fleet remains a Japanese legend to this day. Had Khan succeeded, Japan might be a very different place today.

The legend of the Dragon’s Triangle continued into the 1800s. Sailors supposedly saw a lady sailing a ship in the Devil’s Sea, a ship looked like a traditional Japanese vessel for burning incense. No one found the origin of the ship or why it dogged Japanese sailors for years.

In 1944, a Japanese pilot had a weird experience in the midst of heavy combat against U.S. forces.

Toshiaki Lang claims that he caught sight of a huge sea monster as he traversed the Devil’s Sea during an aerial battle. He said the serpent-like monster swam through the waters quickly and held its head aloft. The serpent had two huge triangular wings that helped it navigate through the churning waters. The creature was, supposedly about 150 feet long.

Without other witnesses, Lang’s story sounds like a fantastic tale.

Investigations Into The Dragon’s Triangle Tales

Then, in 1952, the Japanese sent a vessel into the Dragon’s Triangle to investigate disappearances of ships near the Bonin Islands, also known as the Ogasawara Islands. They form the southeastern tip of the triangle.

The ship, Kaiyo-Maru No. 5, with a crew of 31, was dispatched by Japan’s Hydrographic Office to check on the area surrounding the Bonin Islands. It sank on Sept. 24, 1952 with all hands lost.

At first, scientists offered no explanation as to why the ship suddenly vanished. The legend of the Devil’s Sea continued to gain prominence. 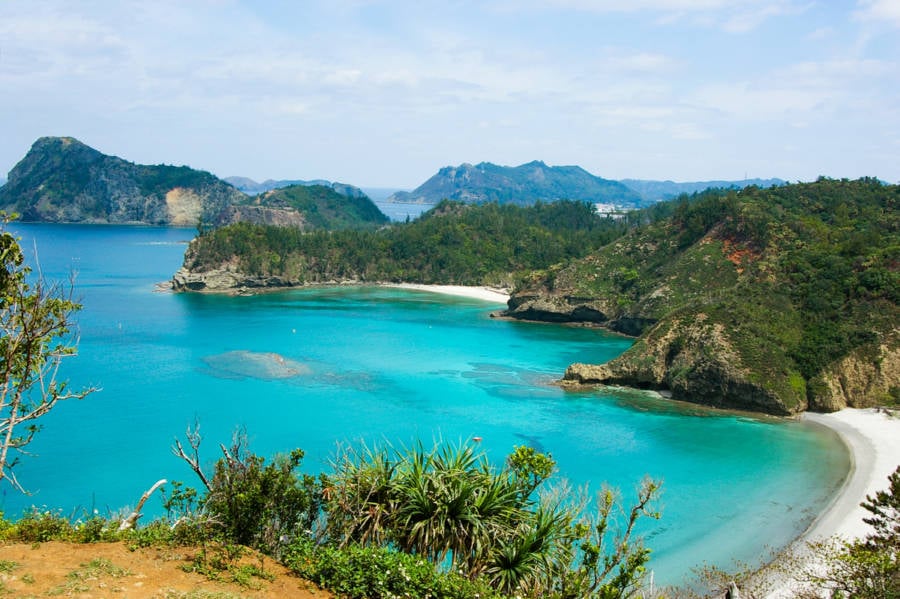 Japanese authorities quarantined the area to ship traffic. It turns out that an underwater volcano exploded just as the research vessel reached the site. The water became too hot, lost its buoyancy, and the ship sank suddenly. The crew never had a chance to escape. The area remained quarantined to ship traffic for decades following the sinking.

The legend of the Devil’s Sea has some truth to it, even though many of the legends associated with this area of water have scientific explanations. Kublai Khan’s invasion happened to occur at the time a typhoon entered Japanese waters. That was in 1281 – long before satellite imagery or advanced airplanes that could scout out an incoming hurricane. Back in 1952, volcanologists didn’t yet understand how an undersea volcano could sink vessels almost instantly.

Author Charles Berlitz claimed in a book published in 1989 that as many as 700 people lost their lives in the Devil’s Sea between 1952 and 1954. In 1995, author Larry Kusche rebutted Berlitz by saying that deep sea fishing is a risky business. Weather, underwater volcanoes and simply not paying attention at sea can lead to danger and death.

The truth is, the Devil’s Sea is part of an active region of the Earth. This area experiences a lot of weather and tectonic phenomena. Chinese legends dating back to 1000 B.C. claim a giant dragon inhabits that part of the world. However, it’s just a pure coincidence that this area of the Pacific is a dangerous sea crossing.

Modern ships, weather forecasting and monitoring of tectonic forces can make the area much safer for air and sea traffic. It’s time to slay this ancient dragon once and for all, and call it what it is as mere tall tales from people who didn’t have rational explanations for what they saw.

Next, check out the guy who got stranded atop Wyoming’s Devil’s Tower for six days. Then, read about Ubasute, the Japanese legend that involves abandoning the elderly in the woods.