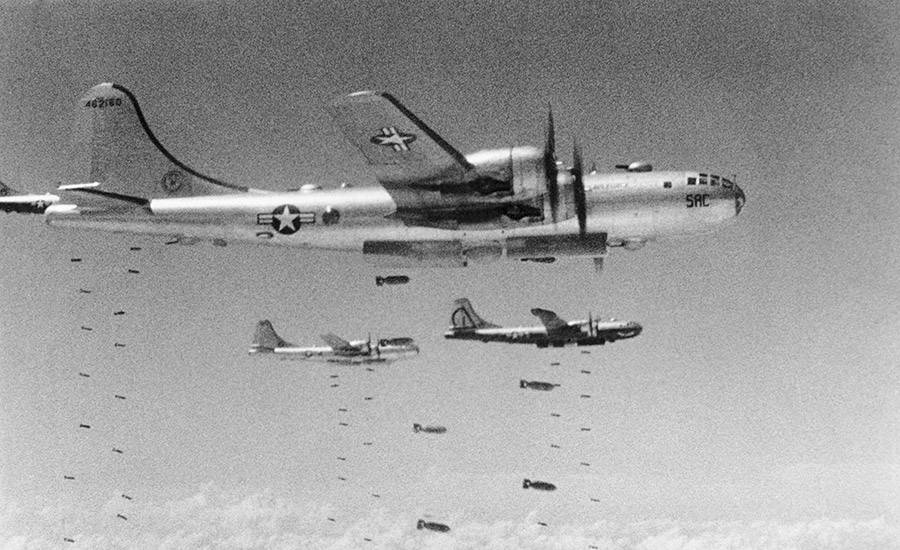 Underwood Archives/Contributor/Getty ImagesBoeing B-29 Superfortresses drop bombs during a raid on a chemical plant in Koman-dong, Korea. August 14, 1950.

At the outbreak of the war, notorious U.S. Air Force General Curtis LeMay approached his colleagues at the Pentagon about the prospects of launching a carpet bombing campaign against the North.

Given his experience in overseeing the firebombing campaign against Japan during World War II, LeMay figured that the sooner that America deployed overwhelming lethal force against the whole enemy population, the less total force would be needed to ultimately win the war.

LeMay thus saw the massive scorched-earth bombing of civilians as a humane gesture to shorten the war and save lives in the long run. To his dismay, however, the general found his colleagues squeamish. According to an interview he gave decades later:

“Right at the start of the war, unofficially I slipped a message in ‘under the carpet’ in the Pentagon that we ought to turn SAC loose with incendiaries on some North Korean towns. The answer came back, under the carpet again, that there would be too many civilian casualties; we couldn’t do anything like that. So we went over there and fought the war and eventually burned down every town in North Korea anyway, some way or another, and some in South Korea, too. We even burned down Pusan. . . an accident, but we burned it down anyway. . . Over a period of three years or so, we killed off – what? – twenty percent of the population of Korea as direct casualties of war, or from starvation and exposure? Over a period of three years, this seemed to be acceptable to everybody, but to kill a few people at the start right away, no, we can’t seem to stomach that.”