This Is What Spain’s “Versailles”, La Granja De San Ildefonso, Looks Like In Fall

After visiting Spain for the commemoration of the nation’s 60-year membership with the United Nations on October 30th, U.N. Secretary General Ban Ki Moon took a private tour of the city of Segovia.

Located in central Spain, the small, walled city makes for a wonderful trip for history lovers, with its medieval castles and the best-preserved Roman aqueduct in the world.

One of its villages, La Granja de San Ildefonso, is home to a fantastic Royal Palace that was used as the king’s summer residence for 200 years. The leaves of the sprawling royal gardens are now changing, and the Secretary General and his wife did not want to miss it. After visiting ourselves, we can see why: 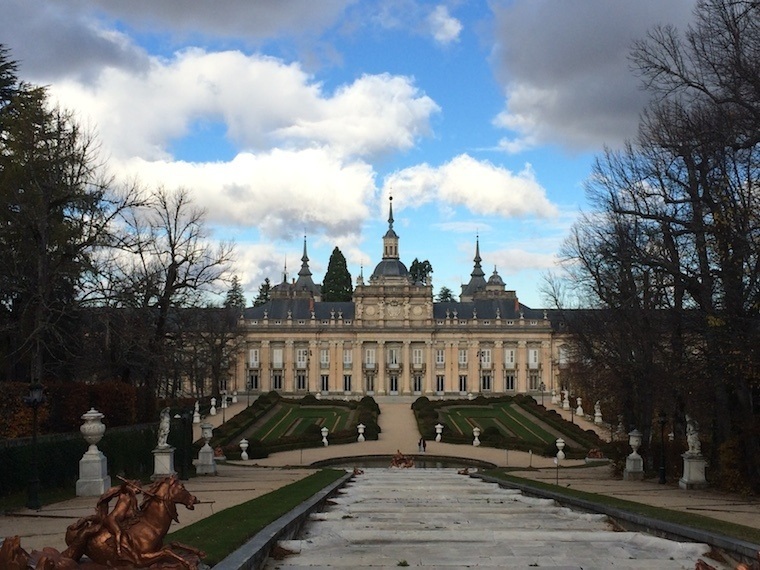 A view of the palace from the entry. King Felipe V developed the grounds toward the beginning of the 18th century, modeling them after Versailles, the French palace which Felipe's great-grandfather, Louis XIV, had built. 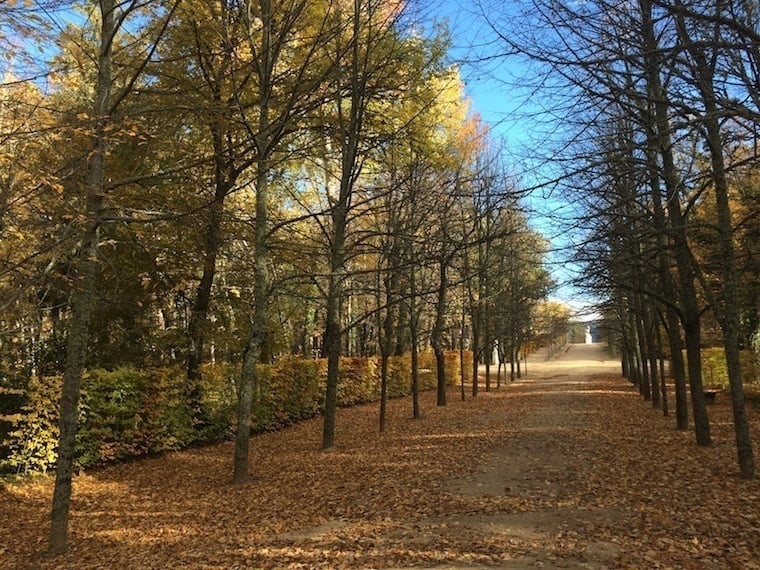 Another of the avenues in the Royal Gardens of La Granja de San Ildefonso. The grounds are only 50 miles from Madrid and not even 7 miles from the city of Segovia. 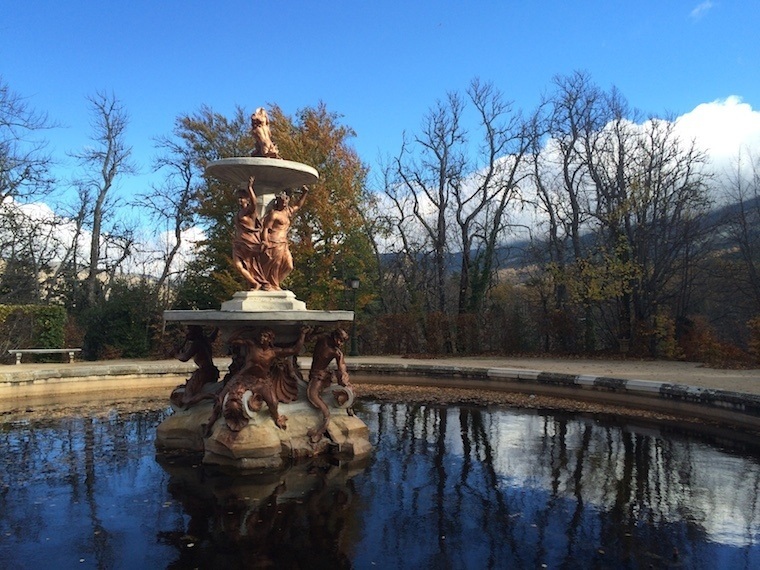 In front of the Royal Palace, on top of a marble fountain called The Fall, rests the Fountain of the Three Graces. It is possibly the most photogenic view of the mansion. 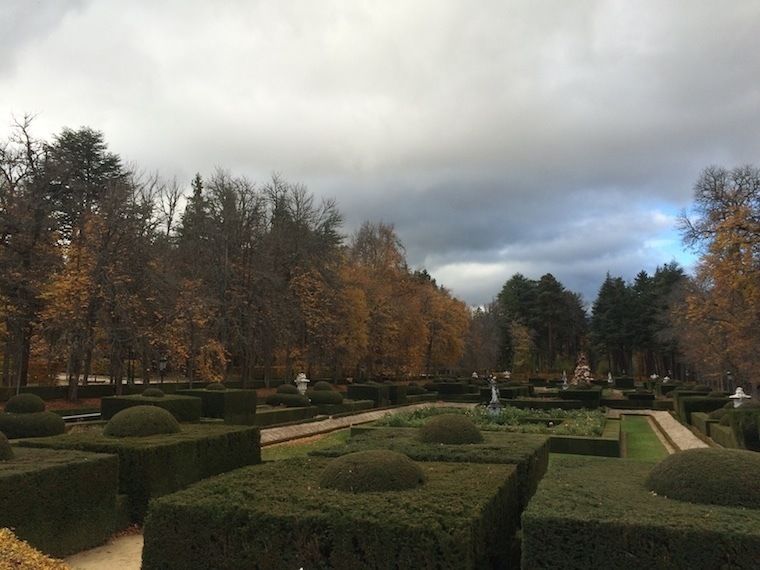 Right at the entrance of the Royal Palace, one can find the organized beauty of the Royal Gardens, which are modeled after Versailles in Paris. 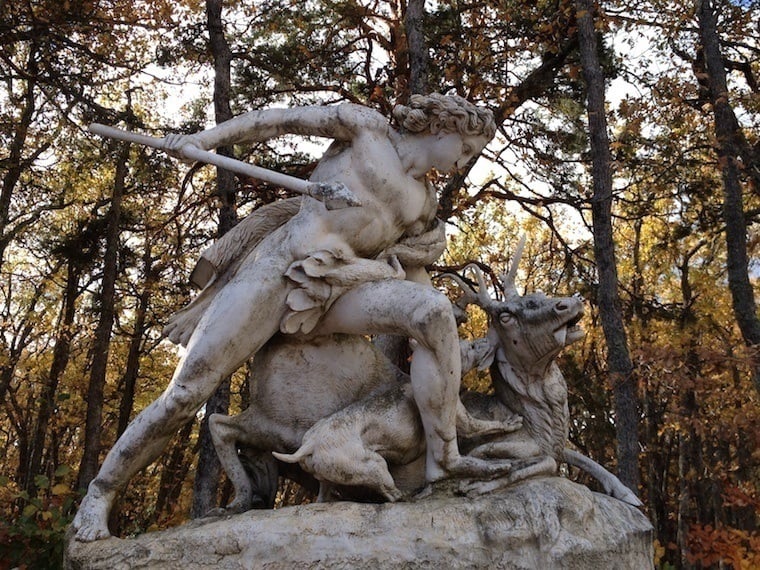 A sculpture of a hunter and deer. 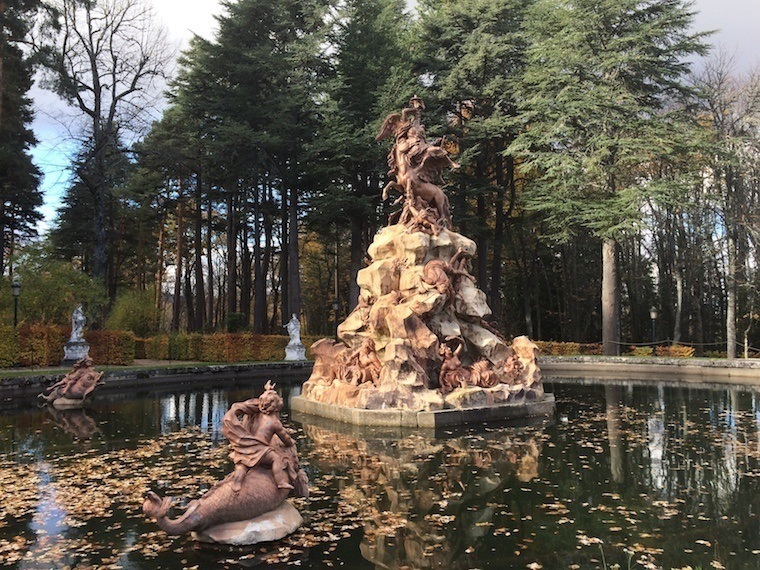 All 21 fountains in the La Granja gardens tell mythological stories. In this one, called "The Fame" (La Fama), Pegasus is carrying Fame while she plays a trumpet. The winged horse is stepping on four soldiers, which represent envy, pettiness, malice and ignorance. When functioning, the water stream reaches 137 feet. 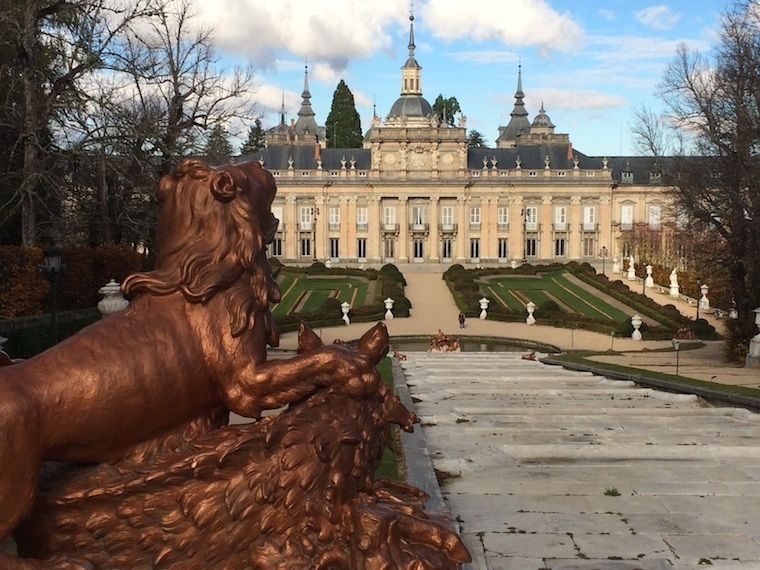 A view of the palace from behind an imitation bronze lion sculpture. 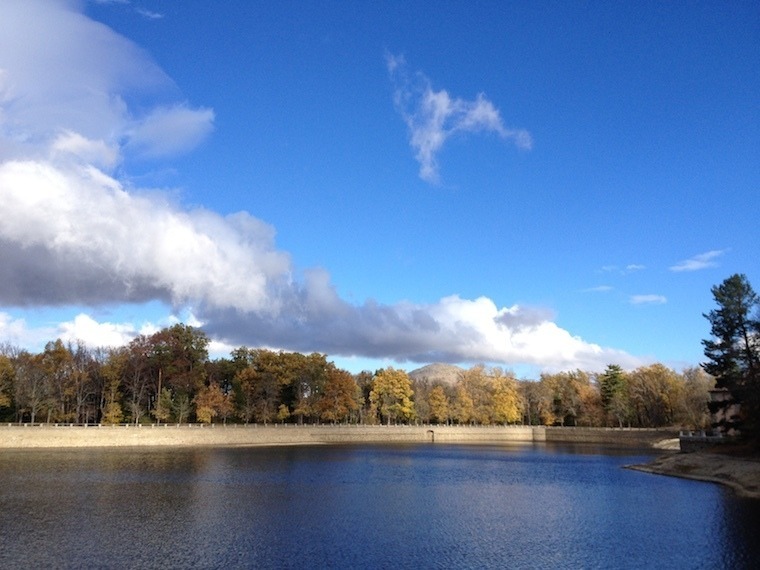 Visitors can find a fishing pond that provides water to some of the fountains. 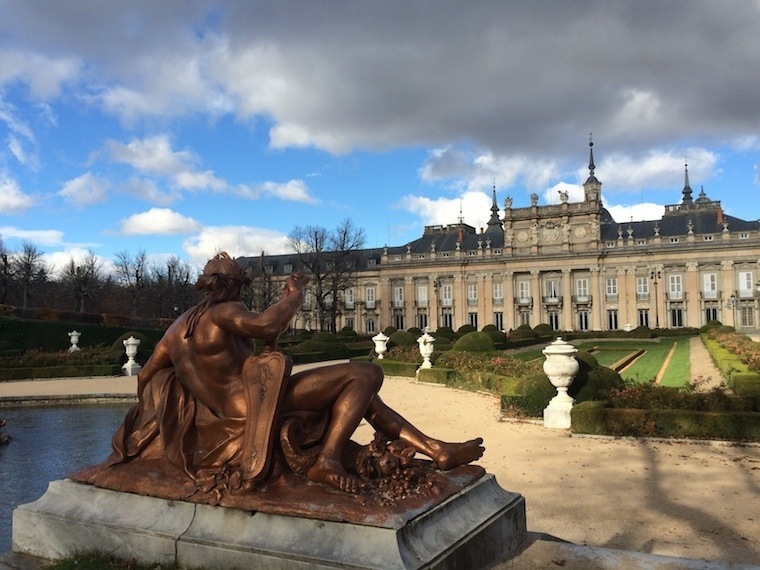 The late days of October and the month of November are perhaps the most beautiful time of the year to visit this old farm. The grounds used to belong to a group of monks, but transferred ownership when Felipe purchased the grounds in 1719. 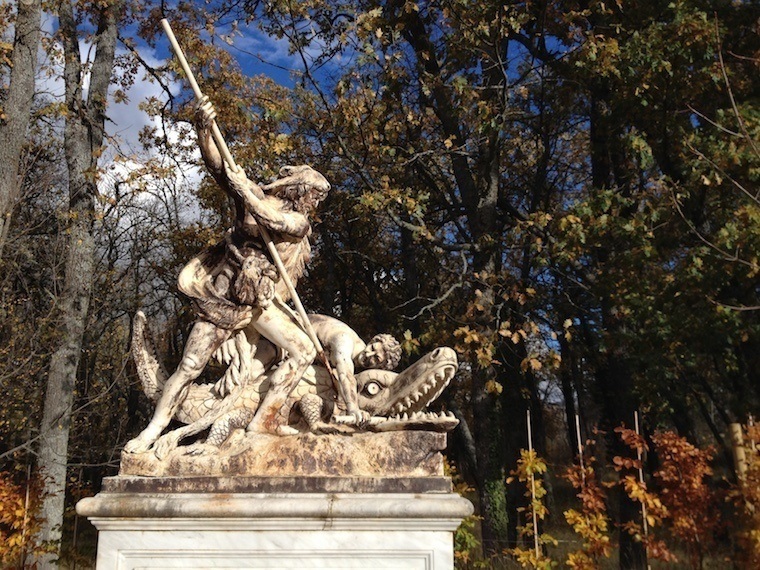 Across the 360-acre property visitors can find mythological representations, not only on fountains, but also on the dozens of sculptures scattered throughout the grounds. 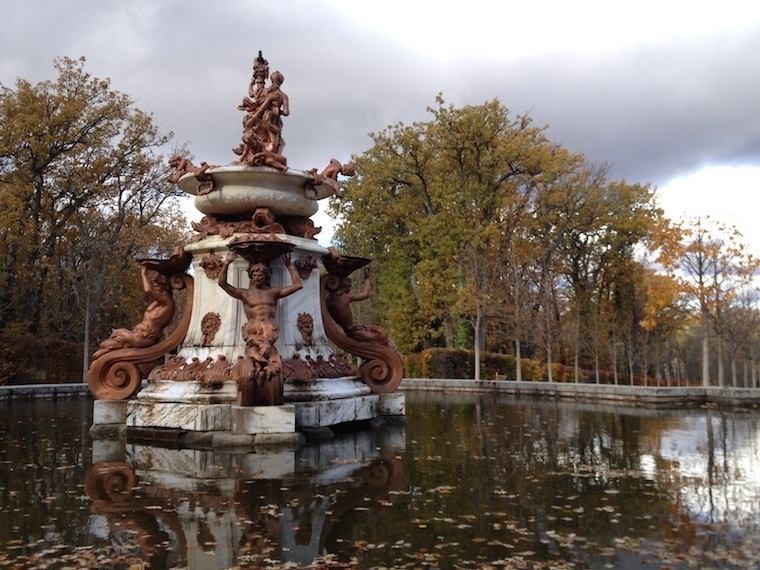 Another view of one of the grounds' 21 fountains. 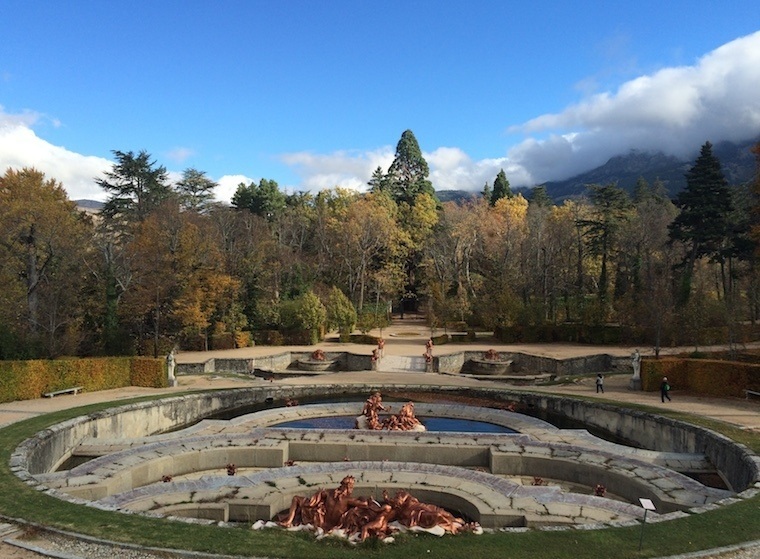 La Granja de San Ildefonso is located at the foot of the mountains that split the region of Madrid and the region of Castilla y León. 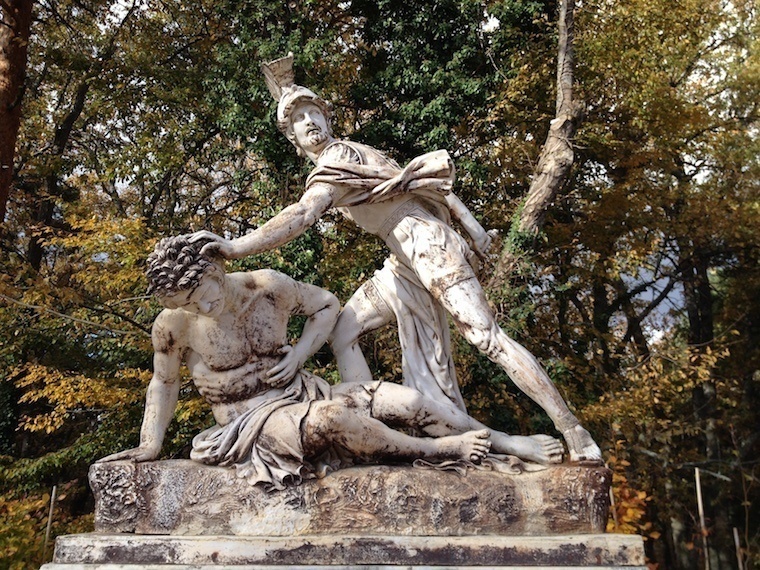 A statue of a soldier. 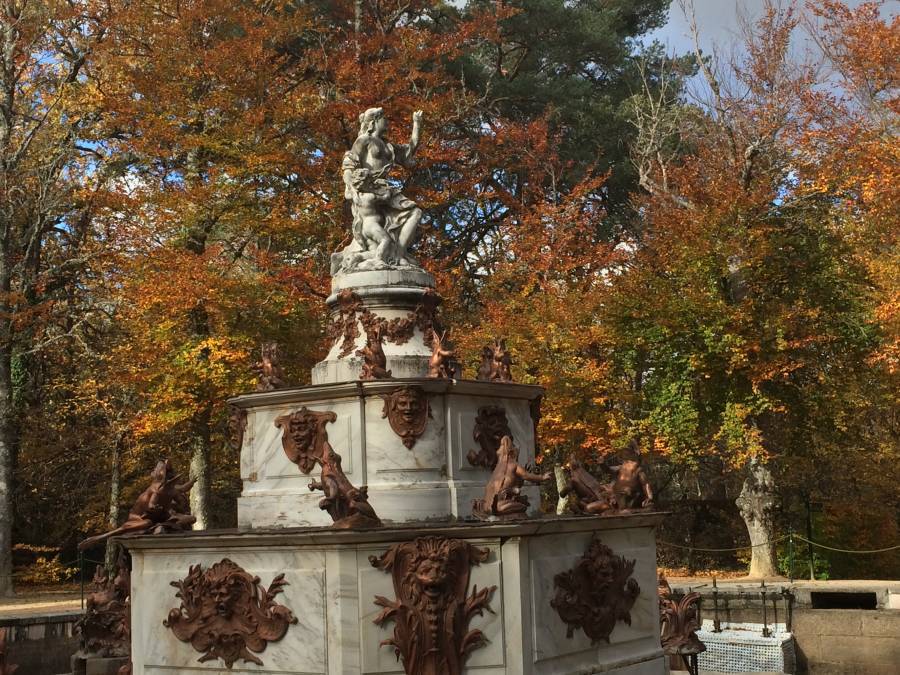 This fountain tells the story of Latona, the mother of Roman goddess Diana. Latona was thirsty and asked some farmers to give her water. Because they refused her mother's request, Diana converted them into frogs. 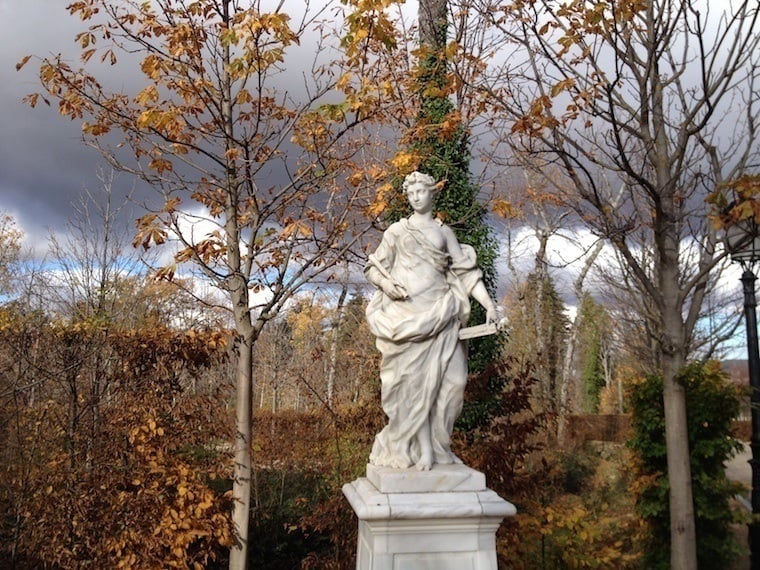 A view of a Greek statue at La Granja. 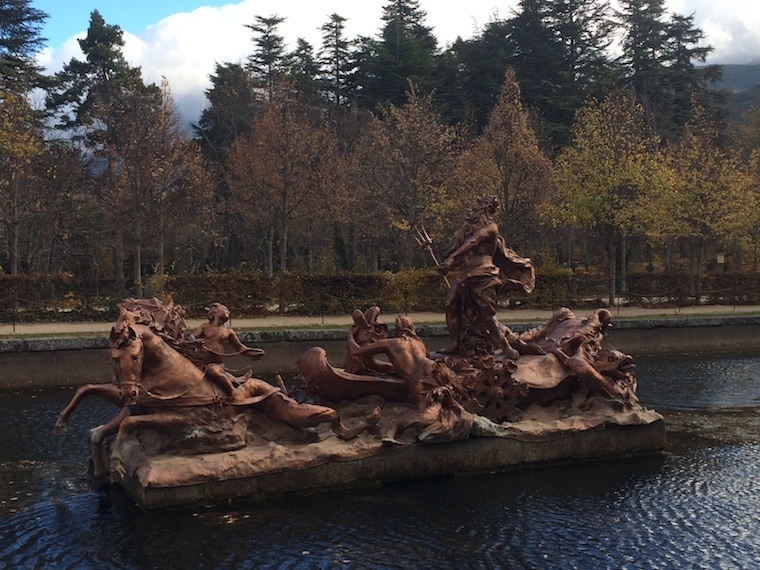 The Neptune Fountain is part of a ‘horse ride’ between three of the fountains, whose plumbing system works together for dramatic waterwork displays in the summer. 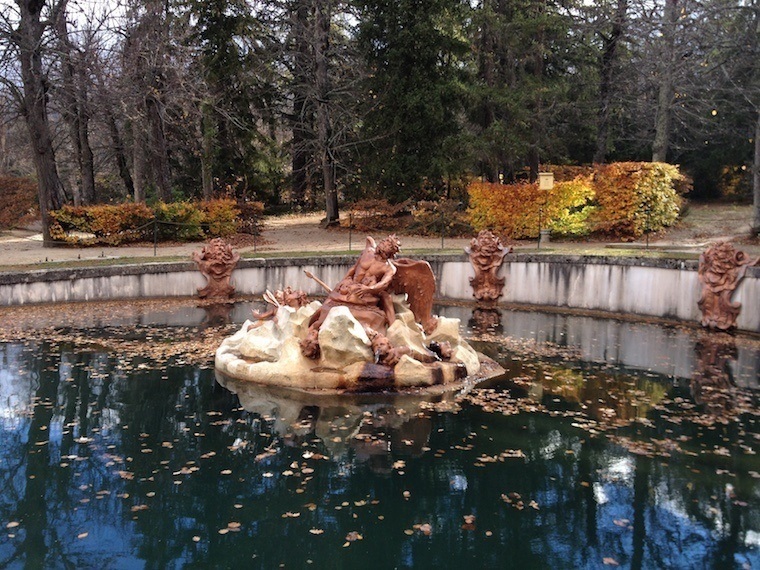 Another view of the fountains. 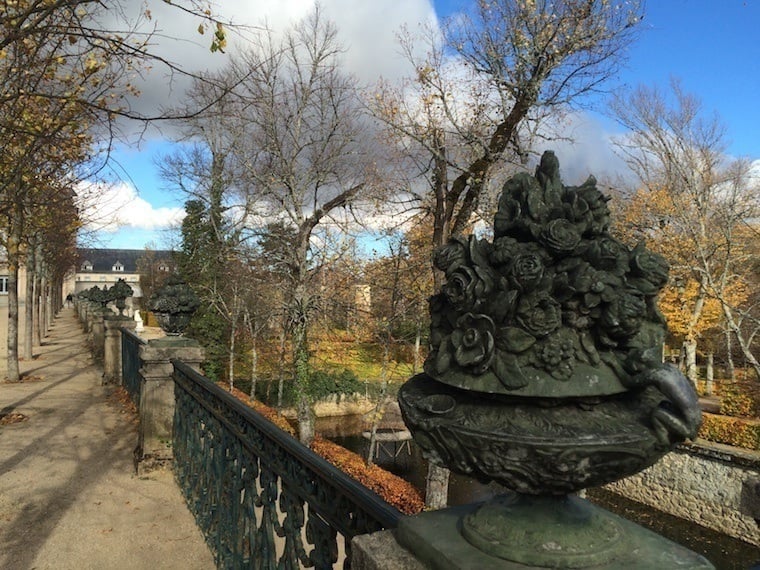 A large urn in the La Granja grounds. 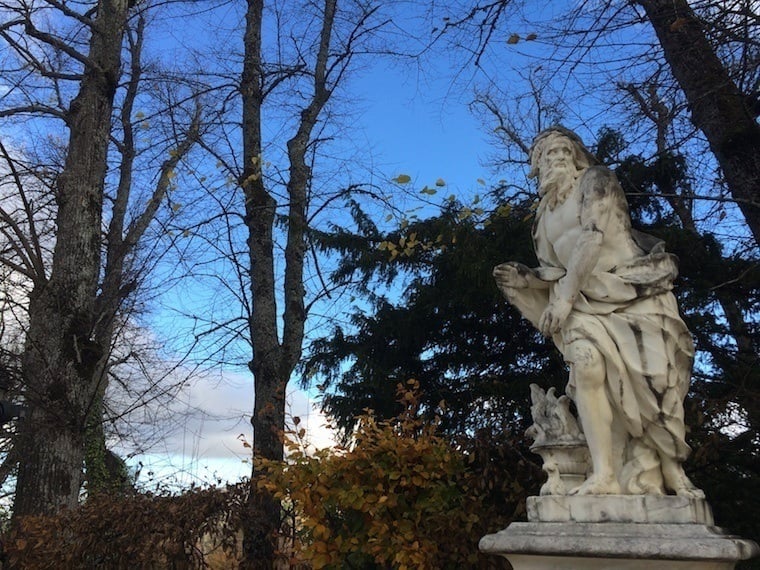 Another statue in the La Granja grounds. 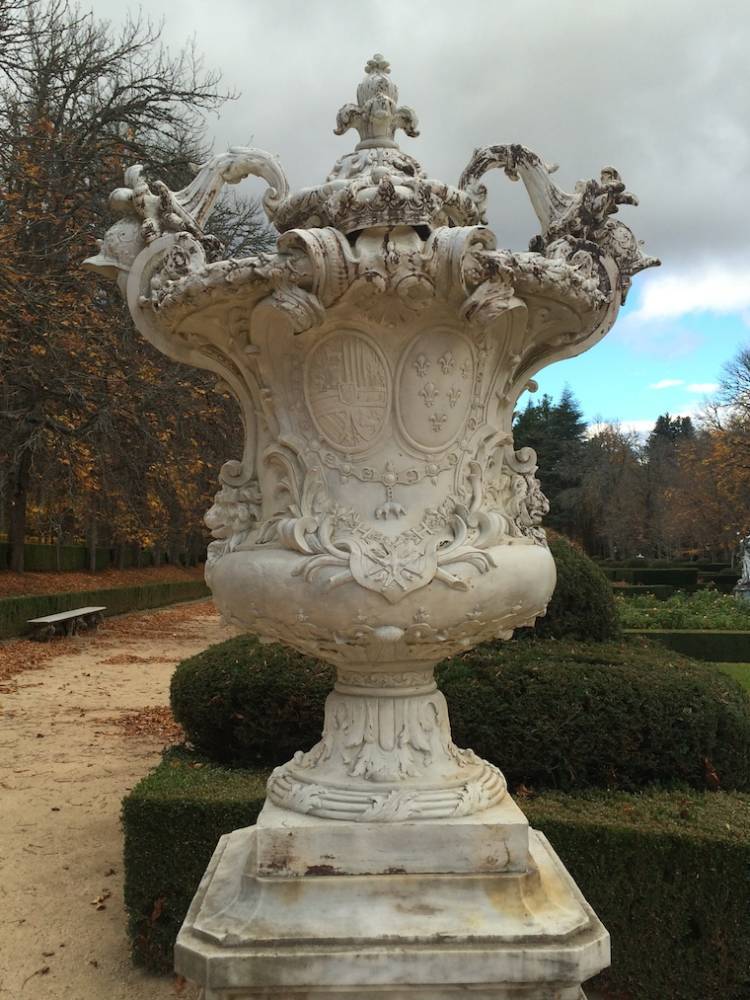 The Royal Gardens of La Granja tell us the history of the country. This vase portrays the ‘Fleur de Lis’ (the French symbol, the Lily Flower) and the Spanish old coat d’arms. 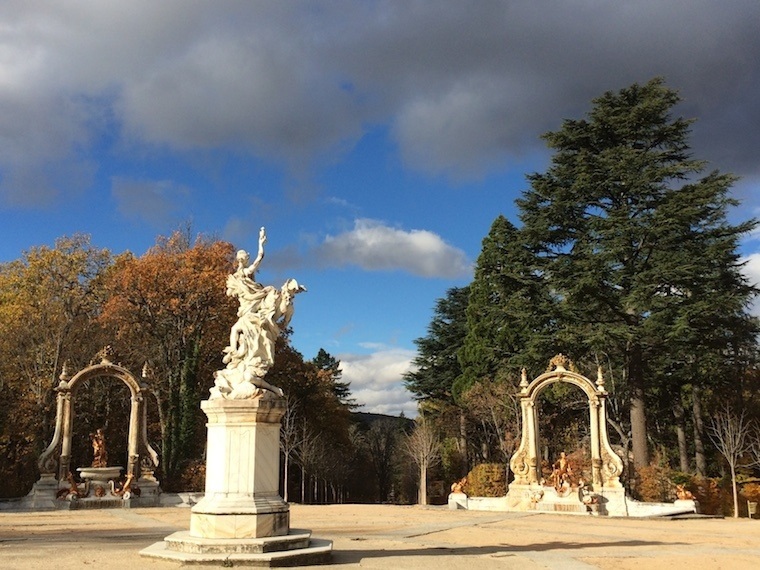 Detail of “The Fountains of the Eight Streets,” a crossroad of eight gardened avenues, with eight different fountains that represent eight different Greek gods. In the center, a statue represents the god Mercury. 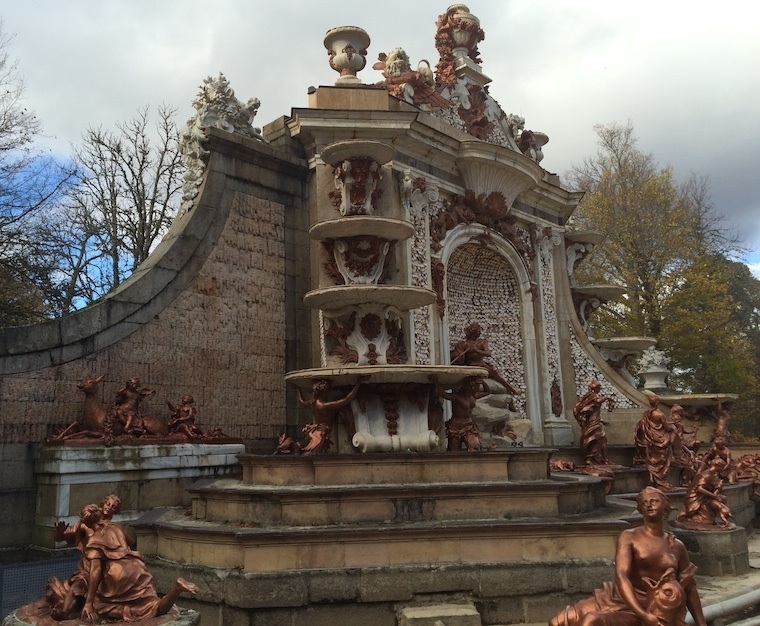 One of the most beautiful fountains is Los Baños de Diana (Diana’s Baths). It is also the biggest fountain and the last to be built. In it, the haunting goddess, Diana, is taking a bath when she is accidentally discovered by a shepherd, Acteon.

In the myth, Acteon becomes a deer by Diana’s wishes and is eaten by his own dogs. 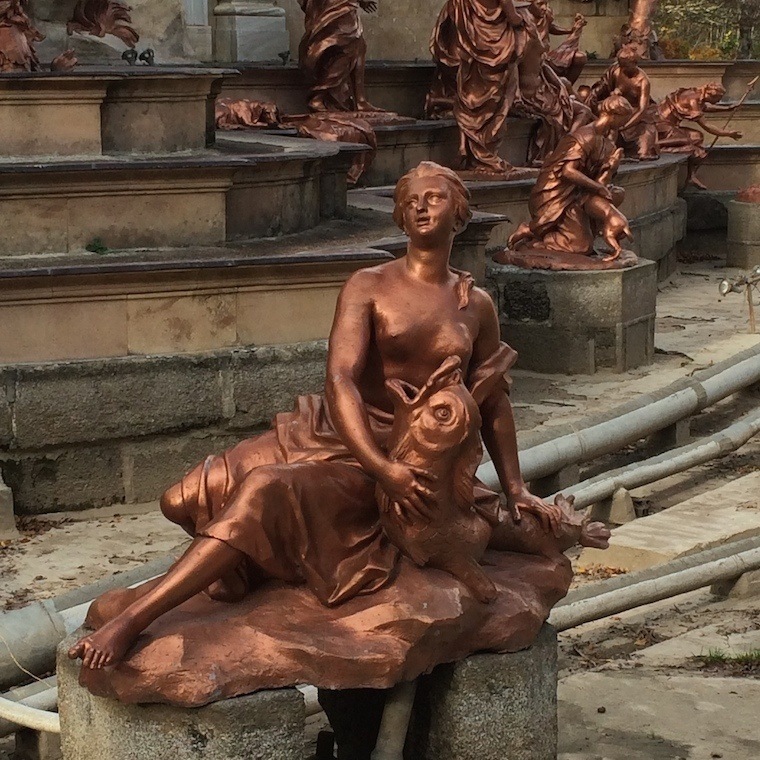 Detail of Diana’s Baths. The fountains are only turned on during the summer to commemorate national and regional festivities.undefined 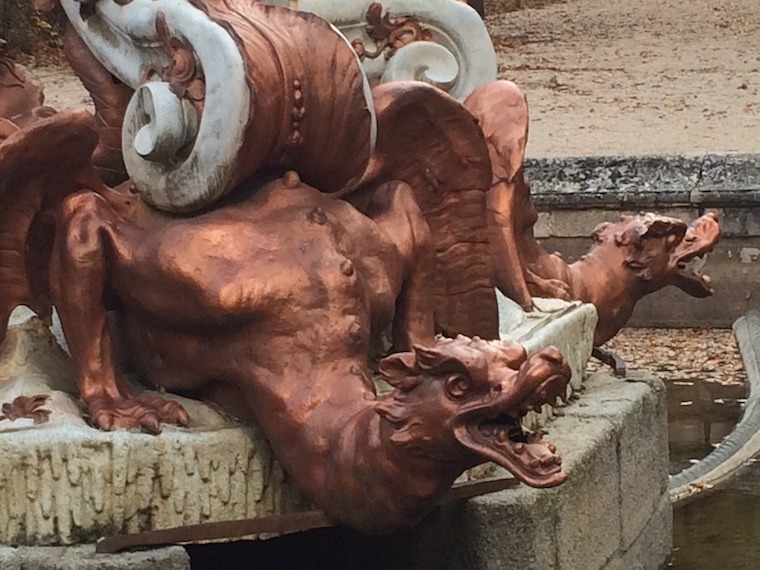 A detail of one of the fountains, called “Of the Dragons Below.” The fountains in La Granja are made of lead, with a layer of imitation bronze paint. 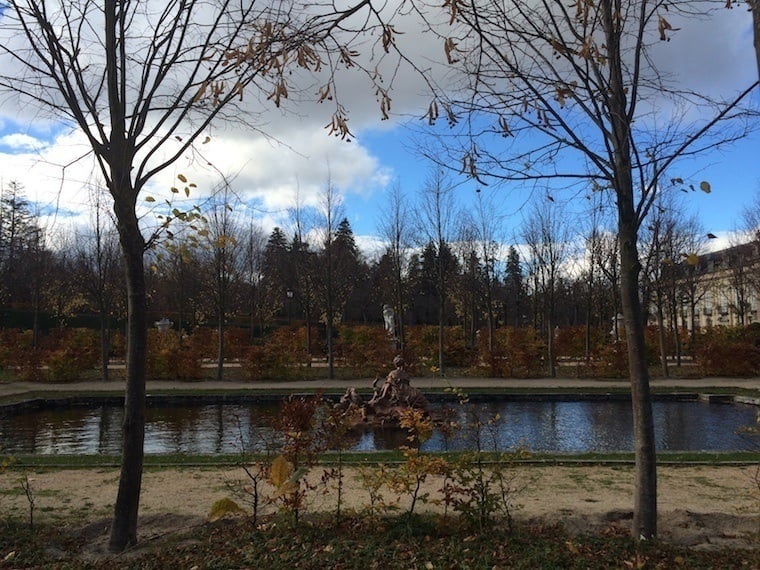 A view of the La Granja pond.