The telescope's 3,200 megapixel camera is so powerful that it could spot a golfball from 15 miles away. 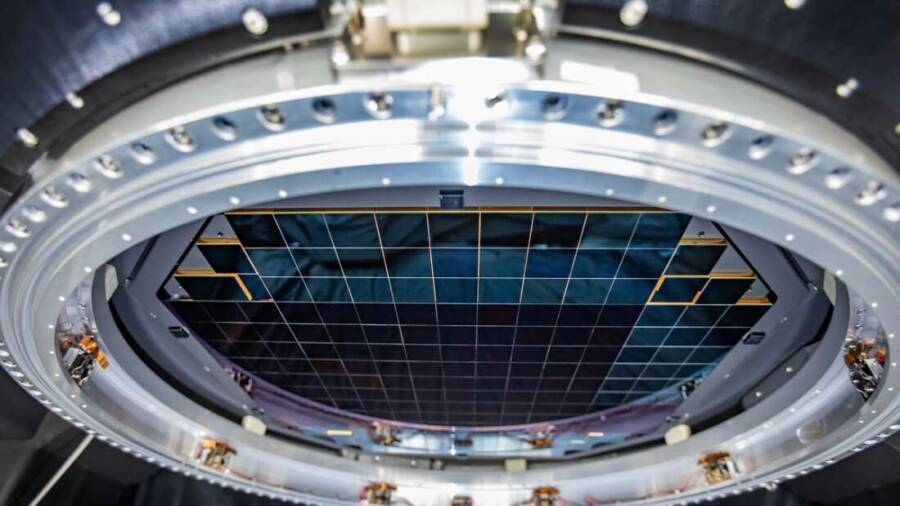 The Vera C. Rubin Observatory Telescope in Chile, which is currently under construction, will let scientists peer into space farther than ever before. Crucial to that effort is its 3,200 megapixel camera, which scientists have just tested on a piece of Romanesco broccoli — and that image is now considered the largest single photograph ever taken.

The sensor array on this telescope makes it the largest digital camera in the world. Its resolution is so remarkable that it could spot a single golfball from 15 miles away. 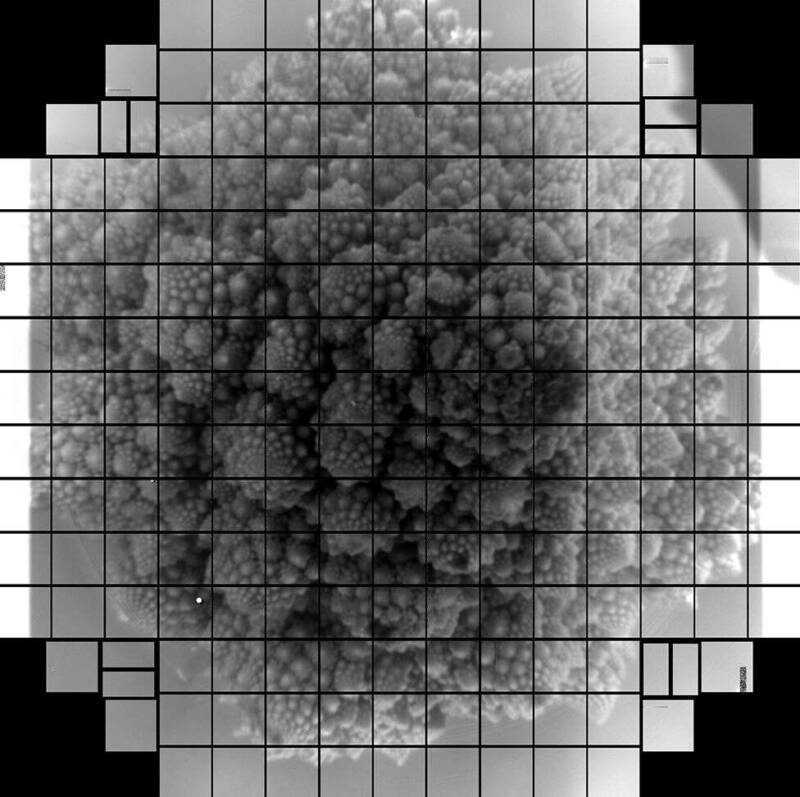 SLAC National Accelerator LaboratoryTo display each one of these images in their full size would require 378 4K ultra-high-definition TVs.

Vera Rubin’s Legacy Survey of Space and Time (LSST) Camera is about the size of an SUV. The photos it has taken while under construction at the Department of Energy’s (DOE) Stanford Linear Accelerator Center (SLAC) in California are considered the largest single-shot images ever taken.

These images are so huge that displaying just one of them in their full size would require 378 4K ultra-high-definition TVs.

“Taking these images is a major accomplishment,” said scientist Aaron Roodman. “With the tight specifications, we really pushed the limits of what’s possible to take advantage of every square millimeter of the focal plane and maximize the science we can do with it.”

The camera works just like the imaging sensor on a smartphone: the focal plane converts the light it receives into a series of electrical signals that generate a digital photo. The LSST Camera, however, has a far bigger and more complex imaging core than anything commercially available.

The focal plane at hand here is more than two feet wide and has 189 individual sensors, which are also known as charge-coupled devices (CCDs). These are housed in 21 separate “rafts,” which are two feet tall, weigh around 20 pounds apiece, and each cost up to $3 million. 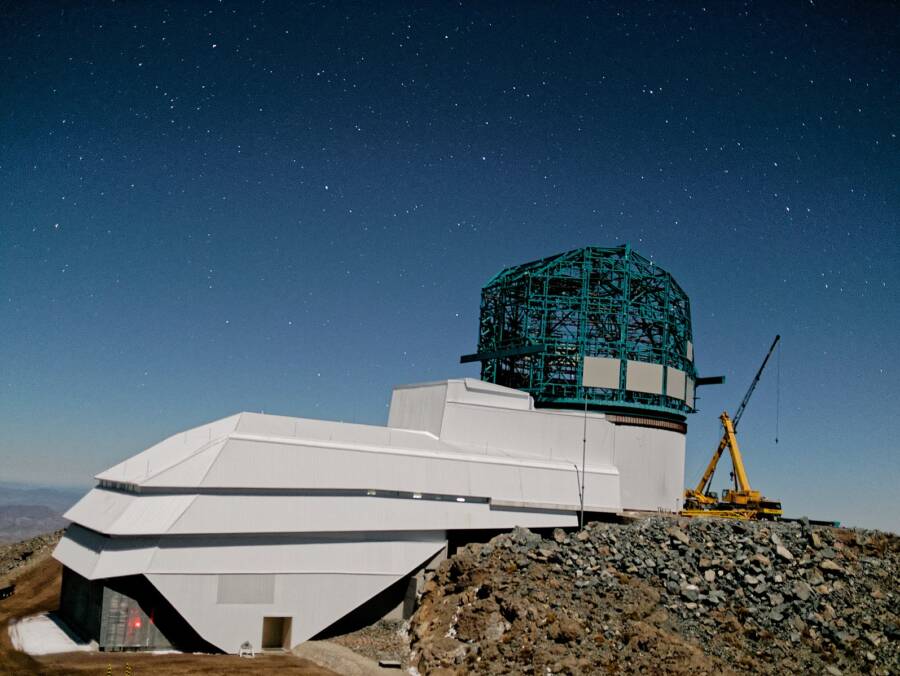 Wikimedia CommonsConstruction at Chile’s Vera Rubin Observatory in September 2019 in preparation for the new LSST Camera.

“The whole camera is about 13 feet from the front lens to the back where we have all our support equipment, and then five feet in diameter — so massive,” said Roodman.

Within this 13-foot behemoth are camera lenses, filters, cables, the nearly-200 CCDs, and refrigeration equipment. The latter is essential in cooling the detectors to a temperature of negative 150 degrees Fahrenheit. When fully assembled, the camera will be focused on the stars. Roodman said he wanted to test the camera beforehand, however, by projecting an image onto the detectors before the lenses are installed.

“So I invented a little thing I call a pinhole projector,” he said. “Basically a metal box with a tiny pinhole at the top of it, and lights inside the box. So kind of the opposite of a pinhole camera.”

Roodman’s resourceful gadget essentially allowed an image of whatever was inside this box to be projected onto the camera’s detectors. There’s a mesmerizing reason why Roodman decided that object would be broccoli.

From sea shells to snowflakes, self-repeating structures known as fractal patterns are ubiquitous in nature. Dividing these structures into parts creates smaller but nearly identical versions of the whole. And so the detailed surface of broccoli is a perfect test for the sensor’s capabilities.

According to NPR, the experts actually initially tried out a variety of subjects before opting for broccoli. Roodman even used a photo of eponymous astronomer Vera Rubin to test the telescope’s new camera at first.

“Mostly for fun,” he added. “It has an interesting fractal structure, and we thought it would look cool, which I think it does.” 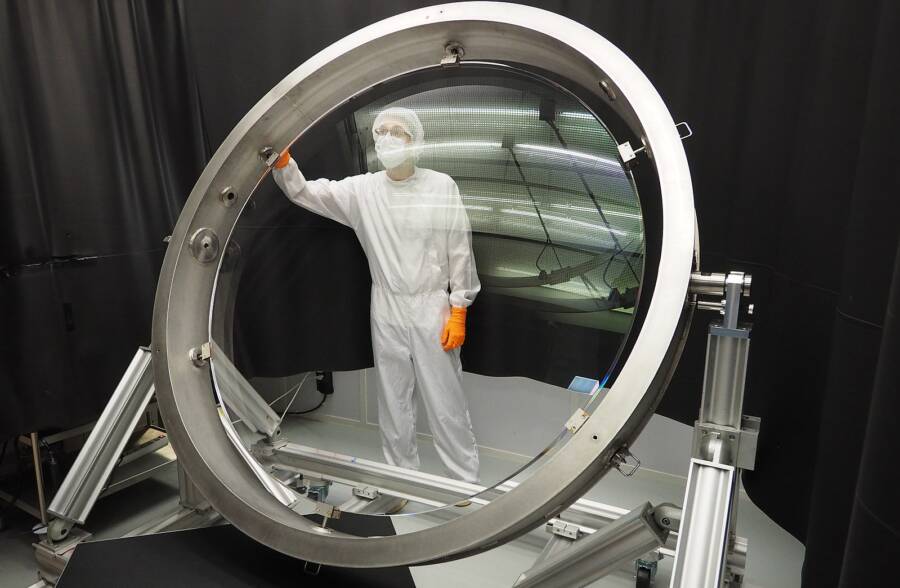 Wikimedia CommonsOne of the lenses for the upcoming camera being polished and coated with antireflective material in December 2018.

The camera is named for the landmark study that the device was built for in the first place. The 10-year Legacy Survey of Space and Time project hopes to take nightly photographs of the southern sky to generate a panorama that includes 20 billion galaxies.

The scientists involved cleverly made sure that the telescope’s new name matched the acronym of its former title, the Large Synoptic Survey Telescope.

“These data will improve our knowledge of how galaxies have evolved over time and will let us test our models of dark matter and dark energy more deeply and precisely than ever,” said Steven Ritz, project scientists for the LSST Camera at the University of California, Santa Cruz.

“The observatory will be a wonderful facility for a broad range of science — from detailed studies of our solar system to studies of faraway objects toward the edge of the visible universe.”

As it stands, the COVID-19 pandemic has halted completion of the camera’s assembly. Roodman explained that he and his colleagues aim to finish and transport it to Chile to install it into the telescope by fall 2022.

For now, the team is more than satisfied with having taken the largest single photograph in history, which will itself be considered a mere blip when the LSST Camera can finally photograph the cosmos in the same detail.

After learning about the the Vera Rubin Observatory telescope taking the largest single photograph in history, read about the highest-resolution image of the sun ever taken. Then, learn about how the alien-hunting Arecibo Telescope was mysteriously damaged over night.