Larry Walters, a.k.a., "Lawnchair Larry," once took a journey 16,000 feet into the air with nothing but a lawnchair and some weather balloons.

Born in 1949 in Los Angeles, Calif., Larry Walters had originally wanted to be a pilot in the United States Air Force, but poor eyesight prevented him from reaching his goal. Instead, he became a truck driver and was living a quiet life in San Pedro when he saw his chance to achieve his dream of flying. With the help of his then-girlfriend, he attached 45 helium-filled weather balloons to an aluminum lawnchair, which he christened “Inspiration I.”

On July 2, 1982, he strapped on a parachute, packed up his lawnchair with sandwiches; a bottle of soda, a camera, a CB radio, and a pellet gun, and settled in for the ride. He intended to fly into the Mojave Desert, and then use the pellet gun to shoot out the balloons, allowing him to come safely back to land.

Instead, he ended up flying much higher than he intended, shooting up 16,000 feet in the sky and drifting into controlled airspace over the Los Angeles International Airport. Walters became nervous, and used his CB radio to call into air traffic control and warn them of his presence. He was spotted by at least two commercial pilots, who also alerted air traffic controllers and the Federal Aviation Administration.

Larry Walters was fearful that if he popped the balloons, he would become unbalanced and fall out of the chair. However, after flying for 45 minutes, he eventually got up the courage to shoot out some of the balloons. He descended slowly, and, after a total of 90 minutes in the air, safely reached the ground.

His balloons had become tangled on the power lines in Long Beach on the way down, causing a 20-minute power outage in the surrounding areas. When he finally came back to Earth, he was arrested and briefly held by the Long Beach authorities, and eventually slapped with a $4,000 fine for violating Federal Aviation regulations. The fine was later dropped to $1,500, and Larry became something of a minor celebrity. He told the press the flight “was something I had to do. I had this dream for 20 years, and if I hadn’t done it, I would have ended up in the funny farm.” 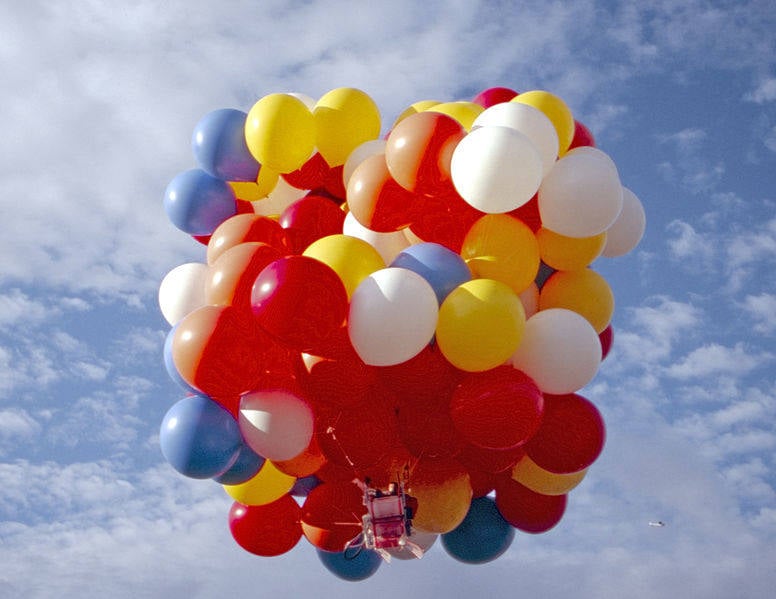 He earned the nickname “Lawnchair Larry” and was invited to appear on the Tonight Show and Late Night With David Letterman. In a less complimentary acknowledgement, he was also granted the 1982 honorable mention from the Darwin Awards and the first place award from The Bonehead Club of Dallas.

Lawnchair Larry tried to capitalize on his fame, and quit his job as a truck driver to become a motivational speaker.

Unfortunately, he was never able to successfully get his speaking career off the ground, and struggled in his later life to make money from the lecture circuit. He gifted the famous lawnchair to a neighborhood boy named Jerry, although he is said to have later regretted giving it away after the Smithsonian Institution asked him to donate it. However, Jerry kept the chair, and later loaned it to the San Diego Air and Space Museum for an exhibit in 2014.

Sadly, Lawnchair Larry committed suicide in 1993. But his legacy lives on, and many others have followed in his footsteps. His legendary flight gave rise to the extreme sport of cluster ballooning, in which participants are strapped in a harness and attached to rubber helium-filled balloons.

Inspired by Larry Walters, others have made similar flights, including Mike Howard and Steve Davis, two men who now hold the Guinness World Record for the highest altitude ever reached while cluster ballooning, as well as Jonathan Trappe. In true Larry Walters fashion, Trappe flew 50 miles in his unmodified office chair, before landing safely and returning the chair to his workplace.

After reading about how Larry Walters became “Lawnchair Larry”, see these 33 images from the wild early days of human flight. Then check out these 24 fascinating Amelia Earhart facts.