Aftershocks of the 1755 Lisbon earthquake were felt as far away as Finland — and people were so traumatized that they questioned their faith and turned toward science. 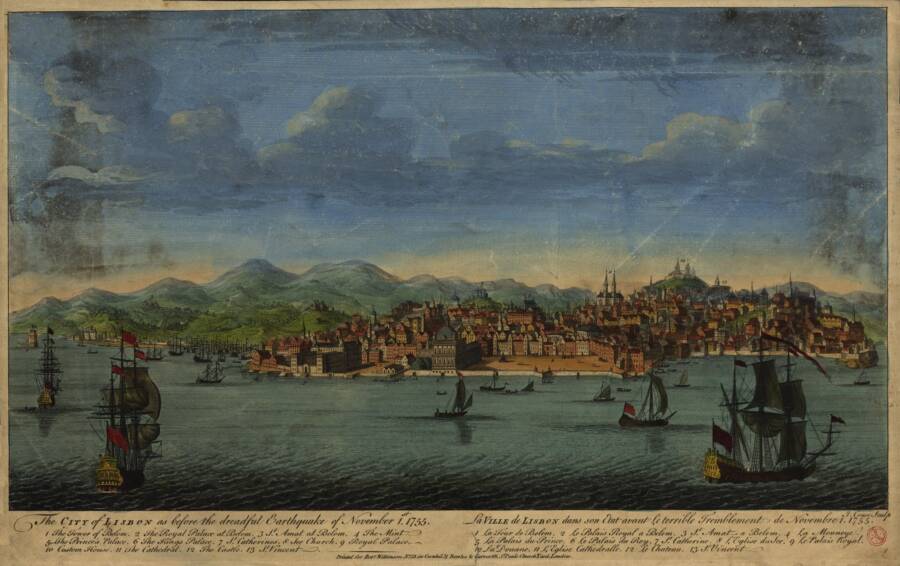 Wikimedia CommonsLisbon before the fateful 1755 earthquake was a glittering capital of significant wealth and culture.

In the mid-18th century, Lisbon was the throbbing heart of a global empire, famed for its grandeur and intrepid explorers. But by 1755, the empire was in a precarious place. Wracked by venomous power struggles, the empire’s territory shrank and became less competitive.

Against this fraught background struck the Great Lisbon earthquake. It was the worst natural disaster ever to affect Portugal and one of the worst earthquakes in recorded history.

By the time the dust had settled, the earthquake had changed the nature of an imperial power, taken the lives of over 100,000 citizens, and even altered the answers to some of the most profound philosophical and scientific questions ever asked.

Lisbon, The Jewel Of The Portuguese Empire 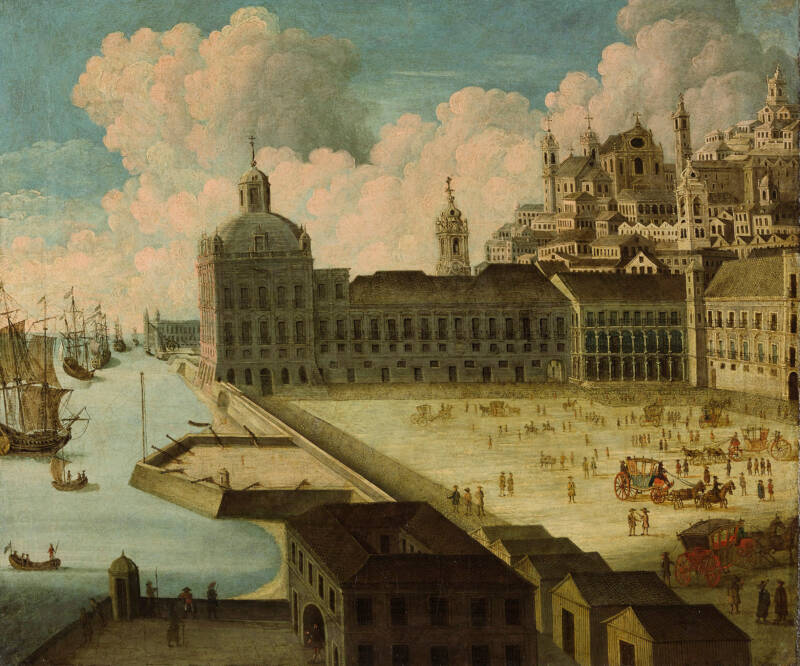 Wikimedia CommonsThe Ribeira Royal Palace was the residence of King Joseph I of Portugal before it was decimated by the earthquake.

According to This Gulf of Fire: The Great Lisbon Earthquake, or Apocalypse in the Age of Science and Reason, In 1755, Lisbon was one of the great cities of Europe with nearly 250,000 inhabitants and a fortune built on spices, gold, and slavery.

It boasted some of the grandest buildings in existence, including the magnificent Ribeira Palace, the Lisbon Cathedral, and the Convent of Our Lady of Mount Carmel, a prized example of High Gothic religious architecture. The convent was also stocked with silver, gold, rare books, and paintings by Titian, Caravaggio, and Rubens.

Every day, dozens of trade ships sailed in and out of Lisbon’s ideal natural harbor at the mouth of the Tagus River, bringing valuable commodities and taking finished goods.

Reigning over this writhing capital was King Joseph I, but the real power lay with his prime minister, Sebastião José de Carvalho e Melo, the Marquis de Pombal. The king and Pombal were both eager admirers of the Enlightenment, but they were challenged by the nation’s ancient aristocracy which feared irrelevance and the loss of their traditional privileges.

But more frightening than the strained political atmosphere was Lisbon’s position on one of the most lethal underwater fault lines in the world.

Soon, the petty political squabbles of a few wigged nobles would seem insignificant.

The Lisbon Earthquake, The Tsunami, And The Fire 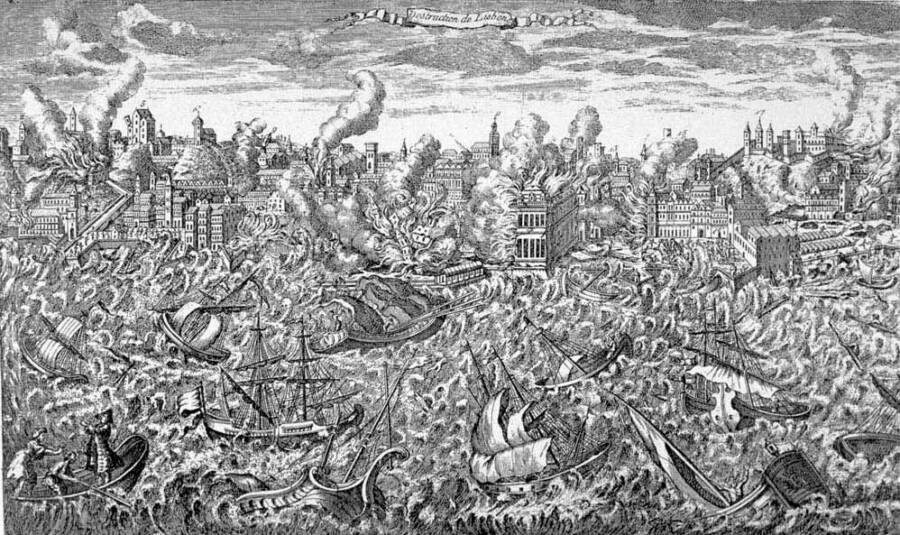 Wikimedia CommonsDesperate citizens rushed to the open seaside when the earthquake hit to avoid the rubble. But moments later, a tsunami hit.

It was the morning of Saturday, Nov. 1, 1755, and Lisbon’s inhabitants were celebrating the festival of All Saints’ Day. The skies were blue.

Then, an earthquake registering somewhere between an 8.5 and a solid 9 on the Richter scale shot suddenly along the floor of the Atlantic Ocean and slammed into Lisbon. For as long as six minutes the city teetered on the edge of the ocean as 16-foot cracks opened in the earth.

Many of the city’s elaborate churches, university buildings, and mansions were immediately toppled, and many more were extensively damaged. Countless pedestrians and workers were instantly crushed in falling rubble. But those who had the wherewithal rushed to the open seaside to avoid being squashed.

But less than an hour later, they watched in horror as the ocean receded.

The tsunami pummeled downtown immediately. Waves dozens of feet high smashed harborside buildings to pieces. Water rushed inland so fast that residents forced their horses into gallops to get to higher ground.

Elsewhere in the city, candles lit for the religious holiday sparked into a raging fire that caused still more damage, spitting flames 100 feet into the air. 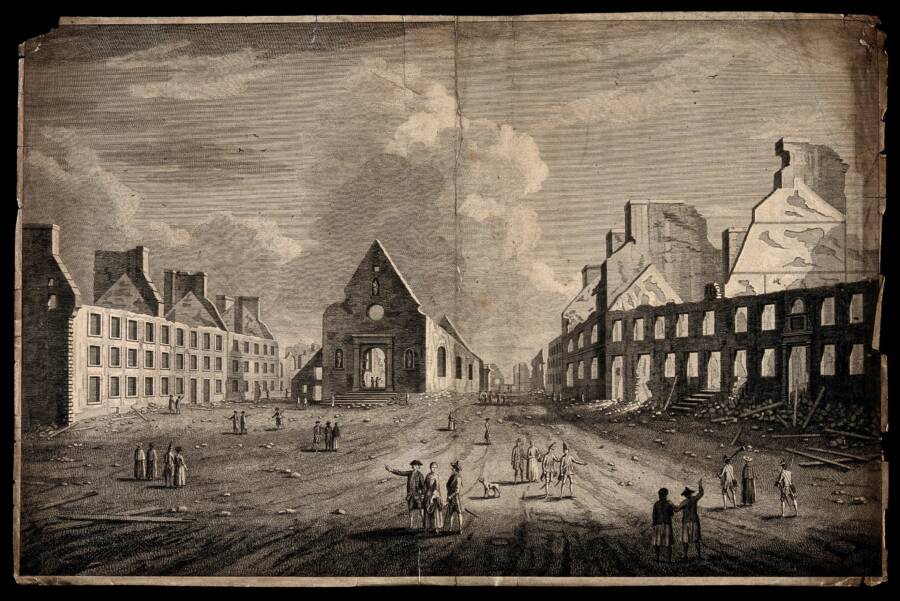 By the end of the day, anywhere from 10,000 to 100,000 people had died, in part due to the rudimentary medical and mortuary services the city had to help them.

Dazed and choked by the noxious fumes from the still-gaping fissures left by the Lisbon earthquake, the city’s stricken people huddled together and collected their wits.

The destruction wrought by the Lisbon earthquake wasn’t limited to the capital. Towns and cities throughout southern Portugal were rocked by the impact. Settlements as far away as Morocco were battered by 66-foot waves instigated by the shockwaves along the ocean floor.

On the other side of the Atlantic, Portugal’s prized colony, Brazil, was struck by minor quakes and waves in a pale imitation of the ruin felt in the mother country.

The true extent of the catastrophe may never be known. Over the centuries, many of the documents related to the impact of the event have been lost, if they ever existed at all. However, if the fate of Lisbon is any indication, then it seems certain that All Saints’ Day, 1755, was a terrible tragedy for many millions on the Atlantic rim. 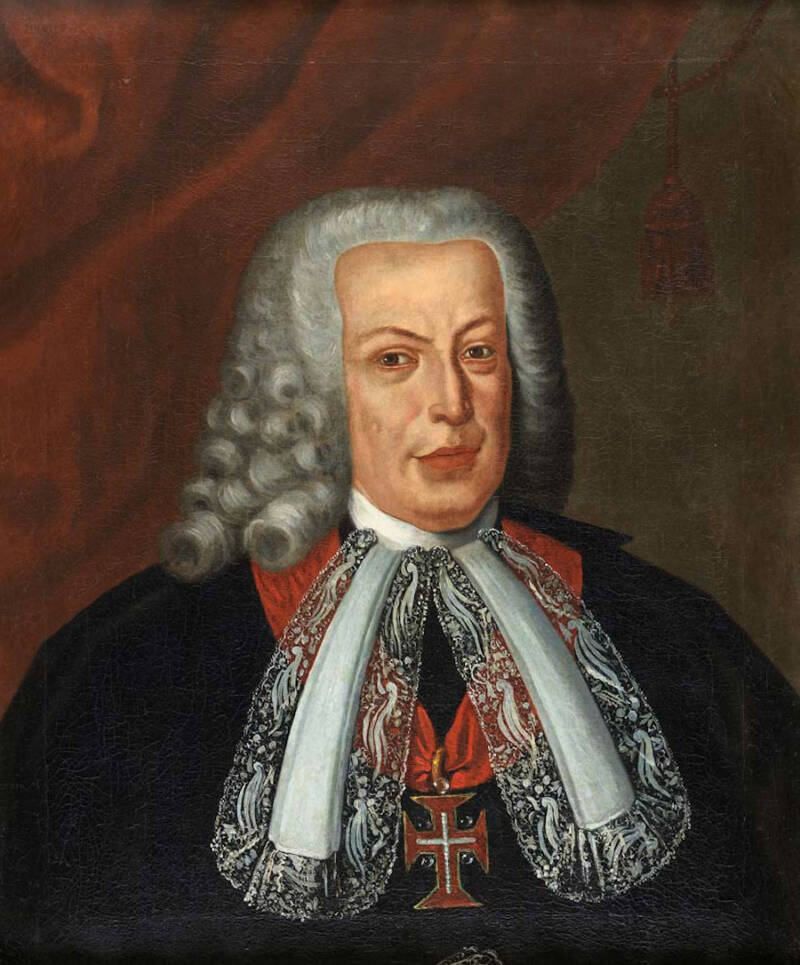 Wikimedia CommonsThe Marquis de Pombal, prime minister of Portugal, whose resolve in the aftermath of the earthquake may well have saved the city from even greater destruction.

Among the smoking, sodden ruins of Lisbon, survivors were at a loss as to how to recover. One apocryphal account holds that when the Marquis de Pombal was asked what to do, he said simply “Bury the dead and heal the living.”

The king had managed to escape the disaster merely by luck. The royal family had spent the day in the countryside after morning mass, luckily putting the head of state out of reach of the destruction. 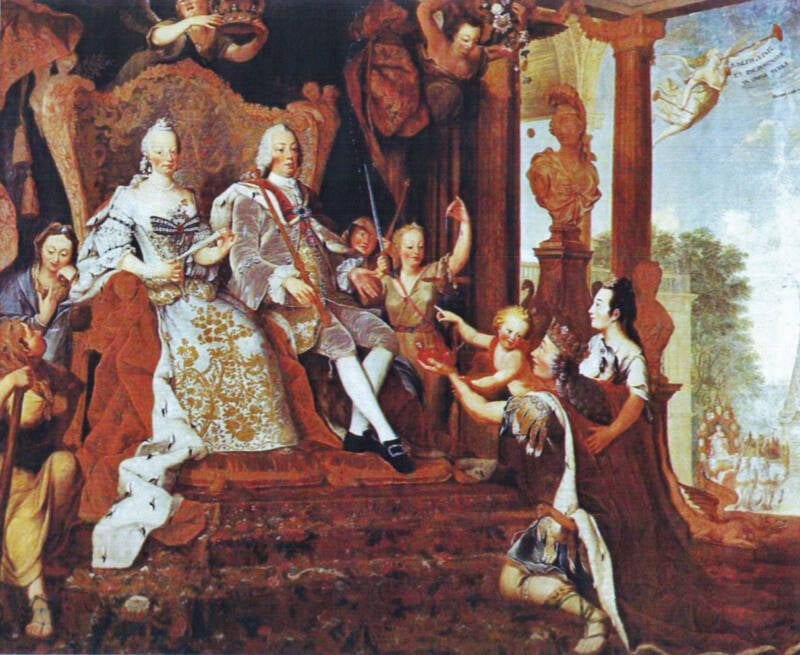 Wikimedia CommonsJoseph I of Portugal with his family. The king’s survival prevented a succession crisis and ensured that the Marquis de Pombal would receive support for his reforms.

Back in town, Pombal deployed troops to keep order, organized groups of volunteer firefighters, and had barges loaded with bodies to be buried at sea. Although the Catholic authorities were disgusted by this violation of burial customs, it likely spared the city even further destruction from a plague outbreak.

The king and his favorite minister then ordered that the old city be destroyed and replaced with new, reinforced buildings that would be able to absorb the impact of further tremors.

This section of modern-day Lisbon is today known as Baixa. Tourists happily stroll these streets observing the buildings of yore on the ground which was once shredded by the Great Lisbon earthquake.

Aftershocks In The Empire, Economy, And Beliefs 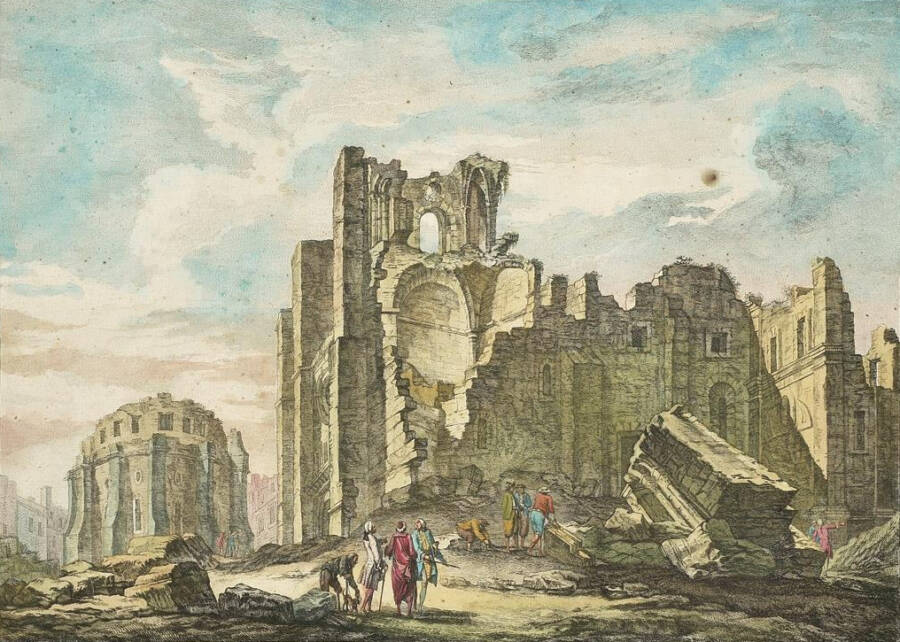 Wikimedia CommonsLisbon’s medieval cathedral was shattered in the disaster with little left for reconstruction.

The 1755 Lisbon earthquake was not only felt underfoot, but it was also felt in the belief systems of those it had affected.

Devout Catholics could no longer accept divine retribution as the reason why so many innocent people had died so suddenly. To writer and philosopher Voltaire, for example, the Lisbon earthquake was proof that the Catholic Church had no more claim to understand the universe than anyone else and to philosopher Immanuel Kant, the earthquake was a demonstration that the planet was indifferent to humans. These ideas were significant in an age that still clung to the divine and wrestled with the notions of science.

After brutally subduing the aristocrats with the public execution of every member of the most prominent noble family, the prime minister set about introducing reforms in nearly every aspect of Portuguese life, sparking a second golden age and preparing the empire for renewed expansion into the 19th century.

But perhaps the most enduring legacy of the 1755 earthquake was the development of seismology. Indeed, many geologists believe that the study of earthquakes began in Lisbon following the disaster when Pombal sent a questionnaire across the kingdom to evaluate the damage in each region.

By carefully collecting data and compiling eyewitness reports, European scientists began to create a study of earthquakes in the hope that understanding these catastrophes as scientific phenomena, rather than mysterious events, might someday help cities to avoid the awful fate of Lisbon.

What Pombal had done, in effect, was what the Enlightenment espoused: to use science and reason to better understand the world in order to survive the gruesome and inexplicable.

Now that you’ve learned about the Great Lisbon earthquake, learn about the bizarre case of Herbert Mullin, the man who tried to prevent an earthquake by murdering 13 people. Then, have a look at the destruction wrought by the Galveston Hurricane of 1900, the deadliest natural disaster in United States history.