Algae, bacteria, and coronavirus lockdowns have all been cited as possible reasons why the Lonar Crater Lake turned pink. 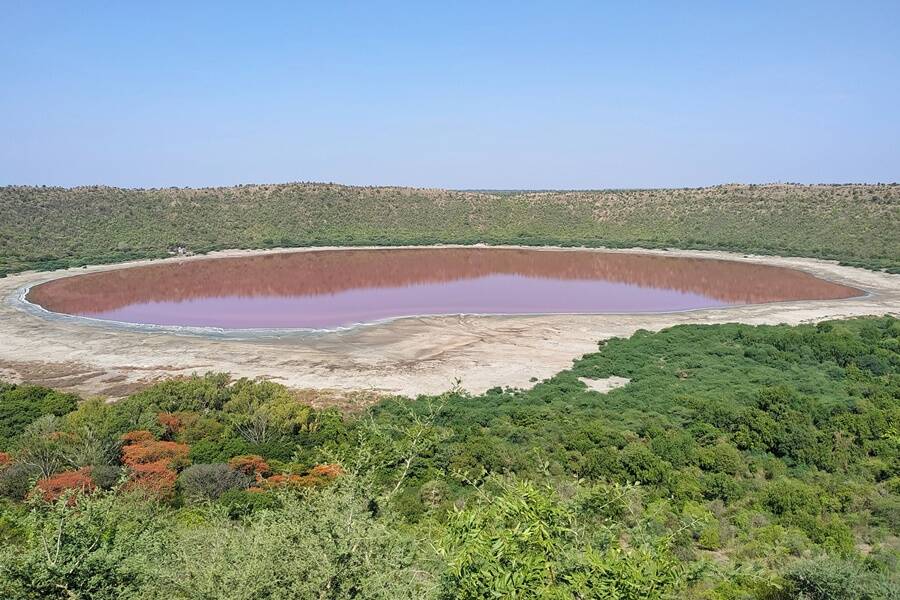 A 50,000-year-old crater lake in India stunned scientists after its normally green-hued water suddenly turned pink. Experts believe the bizarre color change was likely spawned by the changing salinity of the lake though others suspect alternative explanations behind the change.

According to the Times of India, the Lonar Crater Lake’s abrupt color change which occurred overnight in mid-June 2020 has prompted investigations by government agencies and conservation organizations.

Experts noted that the lake’s water had changed color before but never in such a drastic manner.

“We are observing the phenomenon to such an extent for the first time,” MN Khairnar, deputy conservator of the Maharashtra Forest Department in Akola, said. “We will collect samples of the lake water for testing to find the reason behind the occurrence. These samples will be sent to Neeri, Nagpur, and Agarkar Research Institute, Pune.”

Located inside the Deccan Plateau, part of the Lonar sanctuary stretching over 1.4 square miles of protected land in Maharashtra some 310 miles away from Mumbai, the Lonar Crater Lake has an impressive history that dates back millenniums ago.

The crater lake was first formed following a meteorite impact at a speed of nearly 56,000 miles per hour about 50,000 years ago. Since then, the Lonar Crater Lake has gained notoriety as the world’s largest impact crater in basaltic, or volcanic, rock. It also holds the title as the third largest crater of any kind formed less than a million years ago.

So what prompted the famous lake’s color change from army green to a pinkish-red hue? There are a few working theories that have been suggested by experts. The first theory is that the dry season could be affecting the lake’s water level, increasing the levels of salinity as water levels shrink, and, thus, triggering a bloom of red algae.

Principal chief conservator of forests MS Reddy explained that high salinity in bodies of water can encourage the growth of Dunaliella algae which is typically green.

However, the Lonar Crater Lake possesses a unique geochemistry of both naturally occurring saline and alkaline in its water, which enables the growth of specific types of microorganisms not found anywhere else.

Intense levels of the Lonar Lake’s salinity combined with warming temperatures could trigger the production of protective carotenoids which are responsible for pigmentation in bright-colored vegetables like carrots. 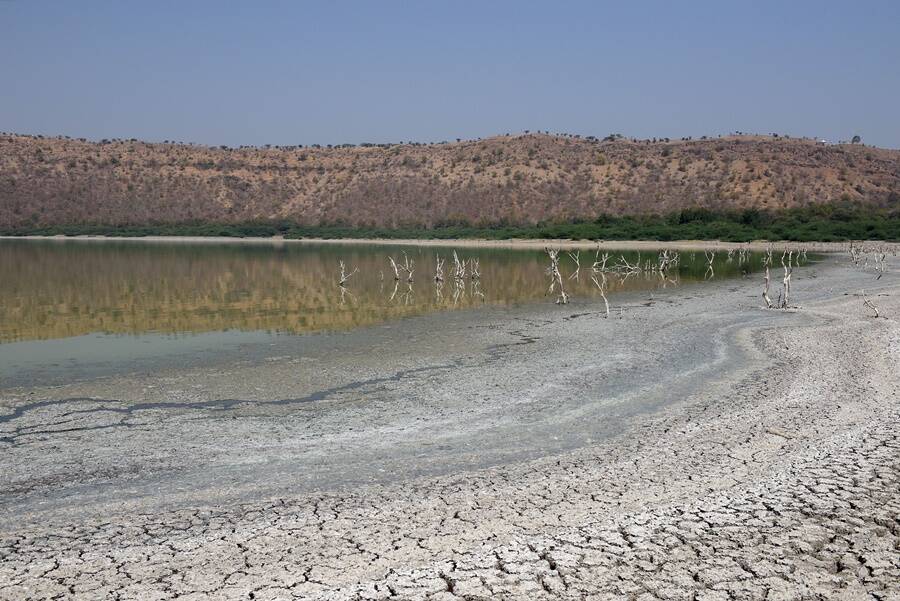 Alex Ogle/AFP via Getty ImagesAn upclose look of the Lonar Crater’s shrinking shoreline due to drought during the dry season.

“This [Dunaliella] algae, under such circumstance, turns red in color,” he said. Reddy likened the phenomenon at Lonar Crater Lake, which has a pH of 10.5, to the appearance of pink water documented at Iran’s Umria lake.

Another theory behind the lake’s pink water is the high alkaline — due to high concentrations of carbonate salt — inside the lake which is typically related to the growth of a bacteria called Halobacteriaceae.

“The halobacteria also uses a red pigment to absorb the sunlight and convert it into energy. This also turns the water red,” Reddy said. Although these explanations are certainly scientifically sound, a third theory to the pink lake has been propped up by experts: human inactivity.

Worlwide reports of drastically improved air and water quality due to the global lockdown during the COVID-19 pandemic have circulated in recent months. Madan Suryavashi, head of the geography department at Maharashtra’s Babasaheb Ambedkar University, said that the loss of human activity in a country with a population of 1.3 billion people could have an influence on the lake’s ecosystem.

“There wasn’t much human activity due to lockdown which could also have accelerated the change,” Suryavashi told EcoWatch. Still, experts have cautioned to wait for the results of the investigations before they can draw any definitive conclusions.

“We will only know the exact causes once our scientific analysis is complete in a few days,” Suryavashi said. In the meantime, such inexplicable phenomena in nature will continue to fascinate both scientists and the public.

Next, learn about the toxic foam that washed up on Indian beaches then take a look at 23 disturbing photos of toxic black snowfall in Siberia.