Meet Lope De Aguirre, The 16th-Century Conquistador Who Stabbed His Daughter To Death While Searching For El Dorado

Lope de Aguirre called himself the "Wrath of God, Prince of Freedom, King of Tierra Firme." But his fellow explorers just called him a madman.

In a wild quest for the legendary El Dorado, Lope de Aguirre murdered his commander, declared himself the enemy of Spain, and sought to build his own empire deep in the heart of South America. 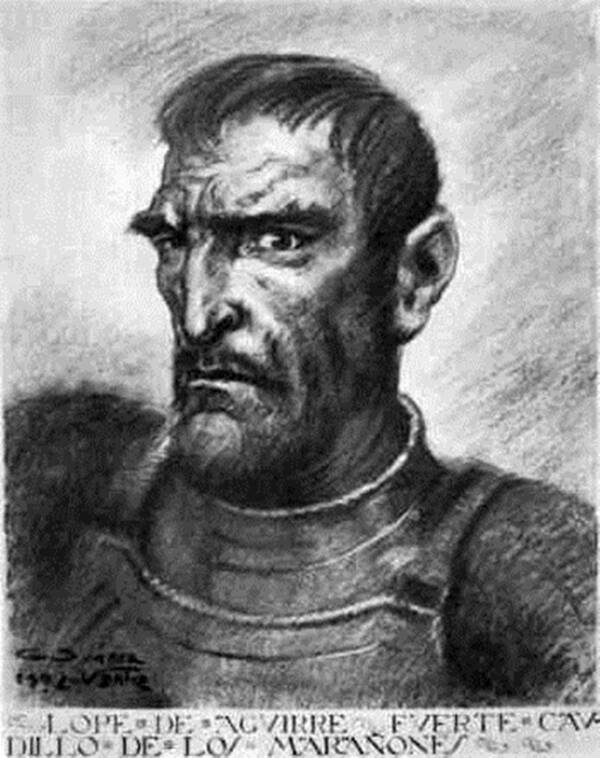 Instead, he became infamous as one of the most bloodthirsty and eccentric conquistadors in the history of the Spanish Empire.

On November 8, 1510, Lope de Aguirre was born to an impoverished noble family in Spain’s Basque Country soon after its conquest by the Kingdom of Castile. Decades of warfare between competing territories, ethnicities, and religions had left the region violent and full of young men accustomed to fighting.

When he heard tales of the riches and fame acquired by the conquerors of the Inca Empire, Aguirre decided that he would make his fortune on another continent. 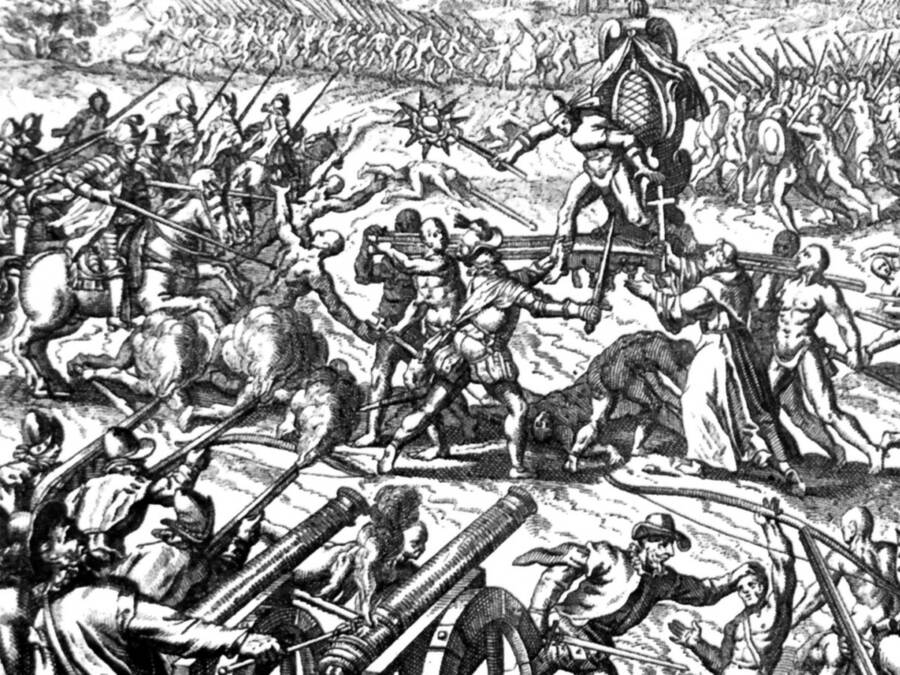 Wikimedia CommonsThe Battle of Cajamarca ended Incan resistance, but sparked decades of infighting among the conquistadores, which nearly resulted in the formation of a separate kingdom.

Arriving in Peru in the 1530s, Aguirre was too late to share in the enormous wealth gained by the veterans of Francisco Pizarro’s conquest of the Inca Empire.

These soldiers were rewarded with the encomienda system, a form of feudal slavery that permanently granted them large estates and control of entire populations of enslaved natives, mostly women and children. But Aguirre made a living breaking horses and working as a mercenary for warring rival factions in the new colony of Nuevo Toledo.

The Maddening Search For El Dorado

Even for the bloody-minded Europeans of the 16th century, the abuses endemic to this system were too much.

When King Charles V sent Blasco Núñez Vela as his new viceroy to enforce laws to end the encomiendas, Aguirre took his side against the wealthy encomenderos. Over the following decade, control of the colony passed back and forth between the rebels and the royalists.

When the royalists finally won in 1559, viceroy Andrés Hurtado de Mendoza had hundreds of bloodthirsty and desperate warriors on his hands with no war to fight.

He soon struck upon the idea of sending these unwanted soldiers to search for El Dorado, which translated to “the Golden One.” This legend had stuck in Spanish minds for decades, growing from a story about a chieftain who covered himself in gold dust to a mythical empire built entirely from gold in the Amazon jungle. 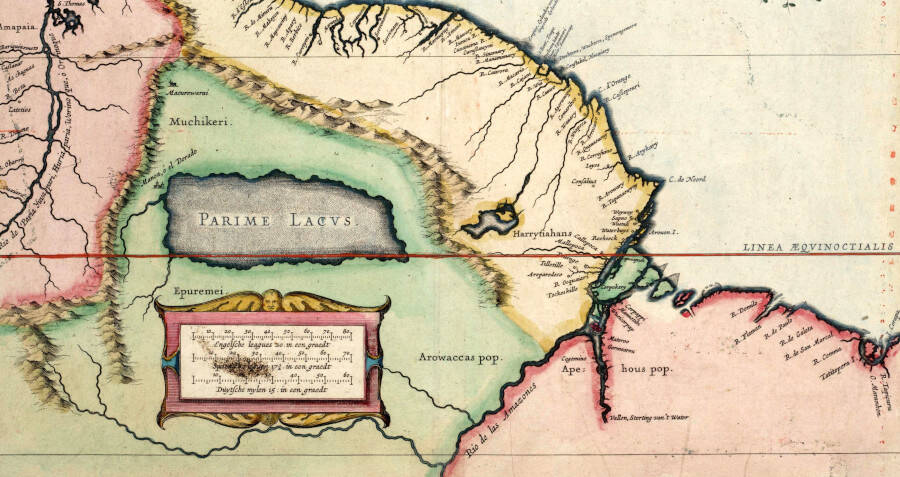 Wikimedia CommonsThis map from 1625 shows a possible location of the mythical El Dorado.

Hurtado appointed a favored officer, 34-year-old Pedro de Ursúa, to lead 300 Spaniards and hundreds of Peruvian slaves into the interior. Ursúa was, in reality, simply emptying Peru of the most violent and dangerous members of the Spanish population, including Lope de Aguirre, accompanied by his young daughter, Elvira.

In his late 50s and just as empty-handed as he’d been when he left Spain, Aguirre was a bitter and broke old man when he signed on for the most fateful journey of his life.

Ursúa’s expedition was troubled from the start, and he’d been warned against trusting many of his men, including Aguirre, who was resentful of his low rank and being denied the right to bring his mistress on the trip.

The expedition traveled hundreds of miles up the Marañón River in canoes stolen from local tribespeople, finding no golden cities. Aguirre began quietly arguing that they should turn back to Peru and seize the riches they knew were there rather than carry on looking for a fantasy.

By the time they reached the territory of the Machiparo tribe, Aguirre had gathered a small band of mutineers together to overthrow Ursúa and replace him with the easily-controlled Don Fernando de Guzmán. On Jan. 1, 1561, the conspirators, who’d taken to calling themselves Marañones after the river they traveled upon, stormed into Ursúa’s tent and stabbed him to death. 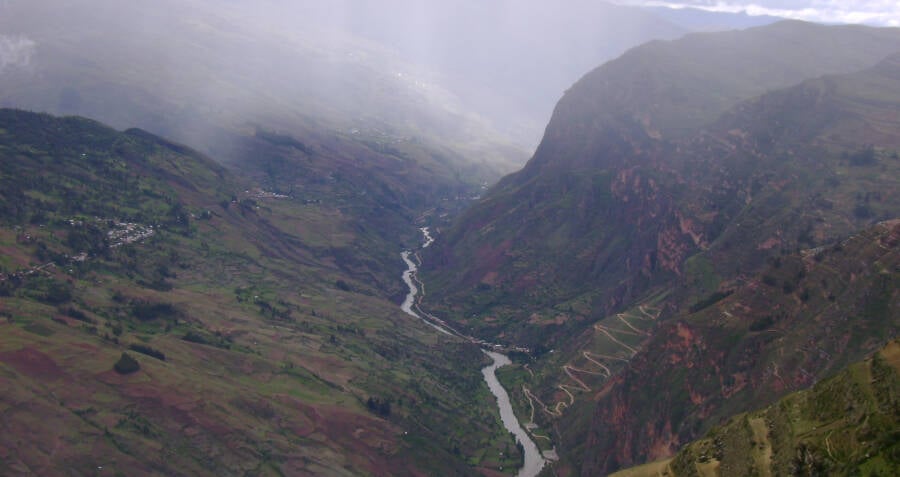 Wikimedia CommonsAguirre traveled down the River Marañón into the Amazon Basin in search of El Dorado.

Guzman had a document drawn up justifying their actions to royal authorities, but Aguirre, now second-in-command of the expedition, signed it “Lope de Aguirre, the Traitor.” To his shocked companions, he explained:

“You have killed one who represented the King’s royal person, clothed with royal powers. Do you think that with documents concocted by ourselves we shall be held blameless?”

Guzman, whom Aguirre had proclaimed “Prince of Peru and Chile,” argued that they should continue the search for El Dorado. While Aguirre wanted to return to Peru, he had no intention of returning the way they’d come, with the anger of the various tribes they’d encountered fresh in his mind.

Instead, they would travel on to the Atlantic, sail north, walk across Panama, and sail south to Lima. When Guzman objected, Aguirre had him killed.

Murdering anyone who got in his way, including priests and Inés de Atienza, Ursúa’s mistress, Aguirre eventually purged the expedition of anyone with noble blood and even left the remaining native Peruvians to die in the jungle.

A King In The Wilderness

In March 1561, Aguirre declared himself the “Wrath of God, Prince of Freedom, King of Tierra Firma,” claiming sovereignty over Peru and Chile. He and the remaining 150 expeditionaries reached the Atlantic by way of the Orinoco River, taking over Isla Margarita and staging raids into Spanish territory.

Then, in July, he sent an astonishing letter to King Phillip II of Spain, declaring his independence from the motherland with the words:

“Denaturalizing ourselves from our land, Spain, we make the most cruel war against you that our power can sustain and endure… I am certain there are few kings in hell because there are few kings, but if there were many none would go to heaven. Even in hell you would be worse than Lucifer, because you all thirst after human blood. But I don’t marvel nor make much of you.”

But the end was nigh for El Loco, translated to “the Madman,” as Aguirre was now known. Tired of his treason and violence, Spanish forces surrounded him in the town of Barquisimeto, Venezuela. His men deserted him en masse, leaving him alone with his daughter.

Deciding that she should be spared the torture reserved for the families of traitors, he stabbed her to death before he was captured.

Finally, on October 27, Lope de Aguirre was shot to death and cut into quarters, with most pieces sent to nearby towns as a warning and his skull kept as a curiosity.

Klaus Kinski in Werner Herzog’s Aguirre, The Wrath Of God.

In the 500 years since his death, Lope De Aguirre has become a kind of demonic antihero in South America. Renowned for his viciousness and irrationality, he’s been the focus of numerous examinations of the conquest mentality and human arrogance.

Perhaps the most famous of these stories is Werner Herzog’s 1972 film Aguirre, the Wrath of God, starring Klaus Kinski as Aguirre.

Ironically enough, Kinski himself turned out to be another kind of madman. Herzog recalls that during fight scenes, actors on set took pleasure in punching and kicking Kinski to vent their frustrations against him. In 2013, Kinski’s eldest daughter stated in an autobiography that her father had repeatedly raped her from ages 5 to 19.

A loose allegorical adaptation of the story of the nightmarish expedition, the film’s production was almost as harrowing as the expedition itself, with filming taking place on rafts floating down the Peruvian Amazon.

At one point, after the notoriously difficult Kinski threatened to abandon the production, Herzog declared that he would shoot Kinski and then himself if Kinski left. Kinski stayed.

In this story and others, Lope De Aguirre has secured a place in history as an example of the cruelty and insanity of imperialism and conquest, becoming the archetypal tyrannical conquistador.

After learning about the cruel exploits of Lope de Aguirre, read up on La Noche Triste, the last effort by the Aztecs to overthrow Hernán Cortés. Then, find out more about Catalina de Erauso, the cross-dressing warrior nun whose adventures took her all over Spain’s vast empire.