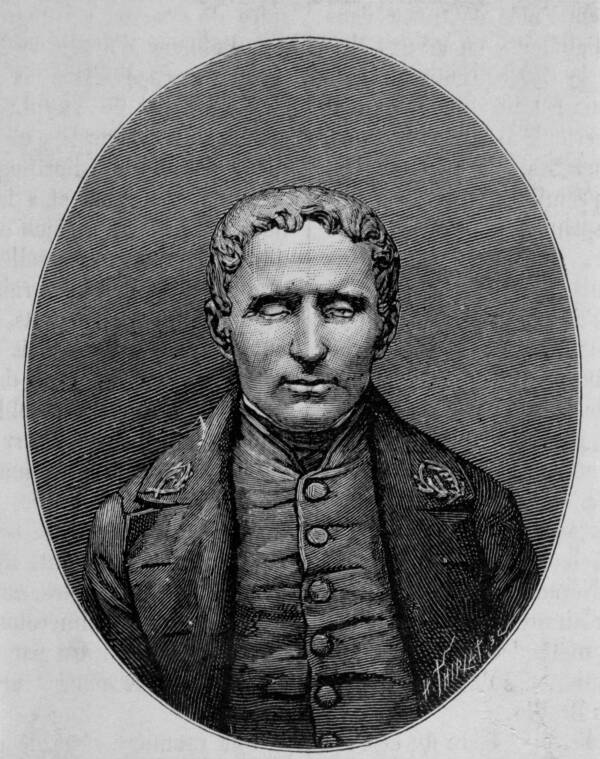 Today, millions of people around the world use Braille to read and write. But before Braille, visually impaired people struggled to learn complicated systems that had major drawbacks. Until a 19th-century French teenager named Louis Braille changed everything.

Who was Louis Braille, the person who invented the Braille system?

Born with sight, Louis Braille became blind at 3 years old. And as a teenager, he created a revolutionary system of reading and writing for the visually impaired.

But Louis Braille’s battle didn’t end when he created Braille. First, he had to convince Paris’s Royal Institute for Blind Children to adopt his system.

Who Was Louis Braille?

Born in 1809 in a small village outside Paris, Louis Braille was named after the king of France. Braille’s mother and father, a saddle and harness maker, gave all four of their children royal names.

When he was 3 years old, an accident in the family workshop left young Louis blind. The boy had been playing with an awl, a tool to punch holes in leather, when he injured one eye. An infection spread to both eyes and took Braille’s sight.

At 10, Braille left home for the Royal Institute for Blind Youth in Paris. He received a scholarship to study at the school, where he learned Greek and Latin while working on his algebra skills. 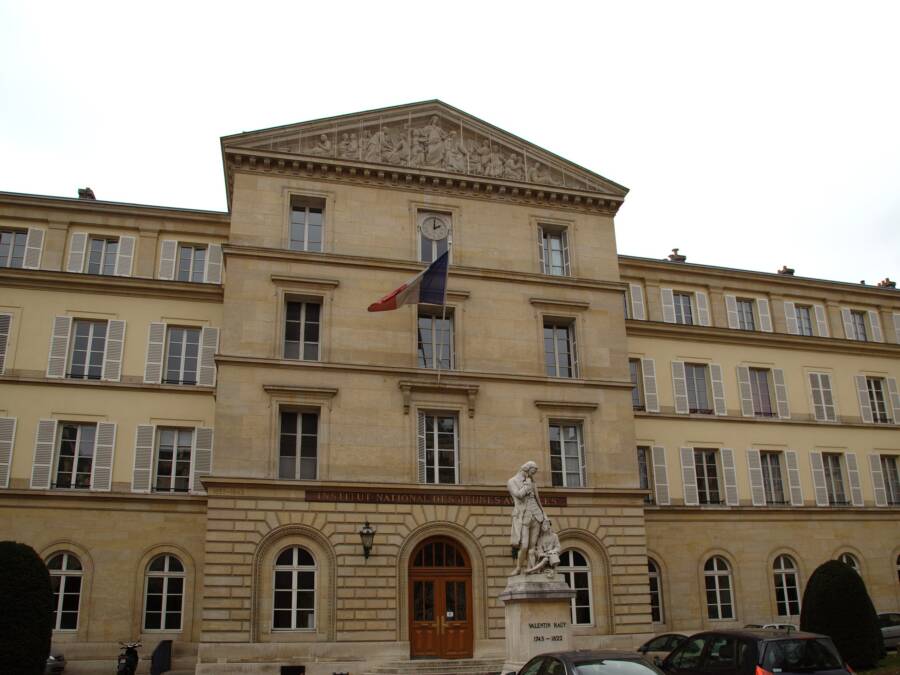 Wikimedia CommonsEstablished in 1786, France’s National Institute for the Blind moved to a stately building in 1843.

The institute had few resources for its students. They learned the shape of letters using twigs, and some nights went to bed hungry.

Louis Braille thrived at the institute, however. He even joined the school orchestra, where he excelled in playing the cello and organ.

His education there helped Braille invent a revolutionary communication system for the visually impaired.

Night Writing And Other Ways To Read By Touch

Braille wasn’t the first writing system for the blind. In fact, Louis Braille based his system on something called “night writing.”

Developed by Charles Barbier, night writing was meant to give France an edge in the Napoleonic Wars. Thanks to Barbier’s system of raised dots, officers could read messages on the front lines even at night.

In the 1760s, Melanie de Salignac learned to read by feeling pinpricks made in paper. She used a similar system to write. The Viennese pianist Maria Theresa von Paradis also read by touch. But costly pinprick methods were largely restricted to the wealthy. 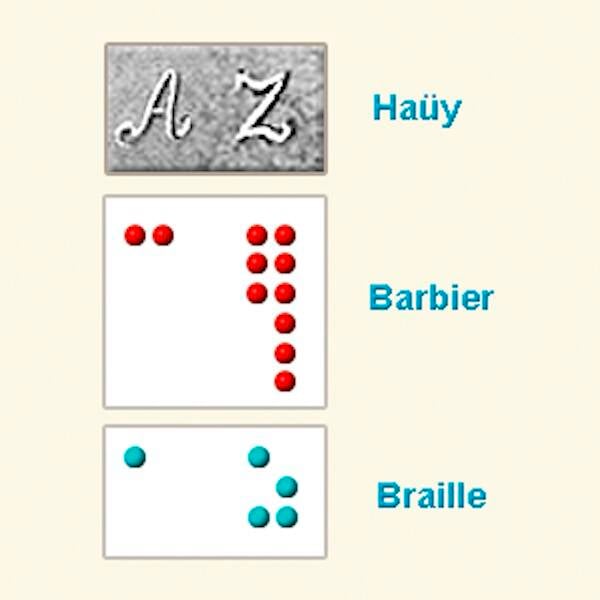 Von Paradis inspired Valentin Haüy to open the first school for the blind in 1786. Haüy used an embossed alphabet to instruct students. But the breakthrough would come thanks to a young student at Haüy’s school: Louis Braille.

The Invention Of The Braille System

In 1821, Charles Barbier visited the Royal Institute for Blind Youth. He spoke to the students about night writing, which used 12 dots. And Louis Braille was in the audience.

After meeting Barbier, Braille decided to develop his own system.

First, the teenager identified a problem in Barbier’s system: It was too complex. Different combinations of dots represented sounds rather than letters, which required 36 unique shapes determined not by the position of dots but by the number in each of the two columns. It also did not have punctuation.

Even worse, the grid of 12 dots was too large to read with one finger.

Starting at 13 years old, Louis Braille created his own dot writing system. Instead of 12 dots, his would include six. Each six-dot cell contained two rows of three dots. Braille used different combinations to represent letters, numbers, and punctuation. 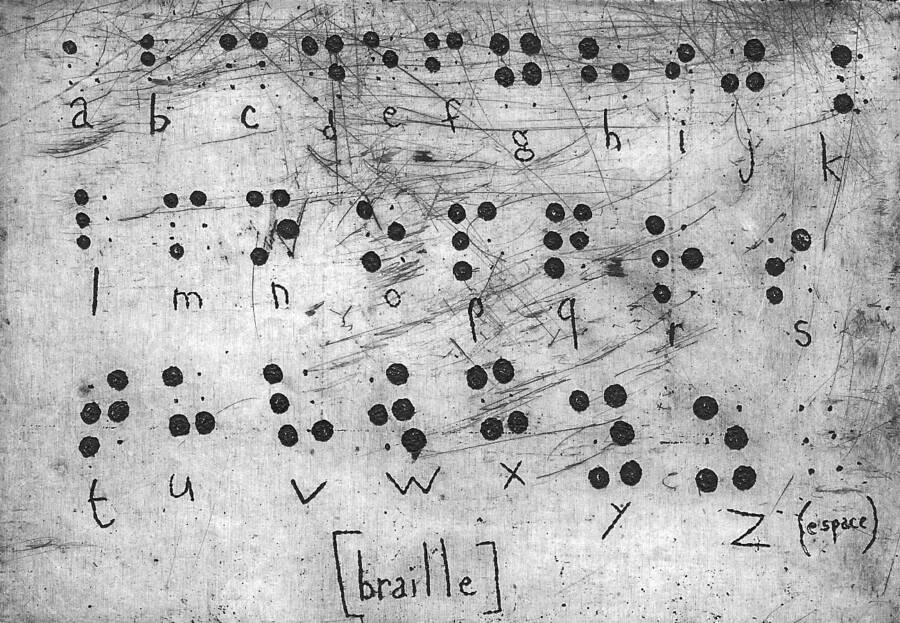 At 15 years old, Braille showed his system to Dr. Alexandre Pignier, the director of the institute.

Louis Braille graduated from the Institute and became a teacher in 1826. He devoted himself to Braille, publishing a book on the system in 1829. Titled Method of Writing Words, Music, and Plain Songs by Means of Dots for Use by the Blind and Arranged for Them, the book included instructions for blind musicians.

Then, Pierre Foucault, another graduate of the Institute, invented the first typewriter for the blind in 1841. 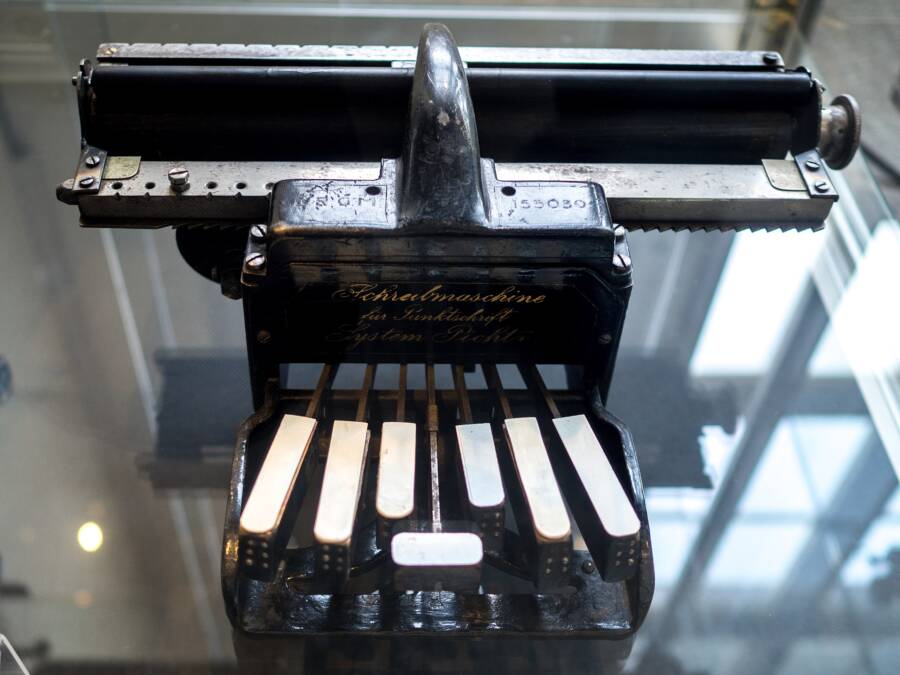 The Braille system was popular with blind students, but many sighted educators questioned the system. When Dr. Pignier resigned, the next director banned Louis Braille’s system. He worried that if blind students could read with Braille, they wouldn’t need sighted teachers.

Louis Braille died before his system caught on. Tuberculosis claimed his life in January 1852.

But before his death, Braille saw the institute embrace his system, holding an 1844 demonstration. As a visitor read a poem aloud, a child transcribed it in Braille. Then a second child who had not heard the poem read the Braille version.

The demonstration proved the usefulness of the system — and in 1854, the institute officially adopted it.

Still, the system Louis Braille created spread slowly outside of Paris. Across the Atlantic, at the Perkins School for the Blind, students learned square-hand – a system of writing on grooved paper. But the students couldn’t read what they wrote.

Why did Braille catch on? Because blind students across the globe adopted it, eventually convincing educators that it was better than the alternatives. 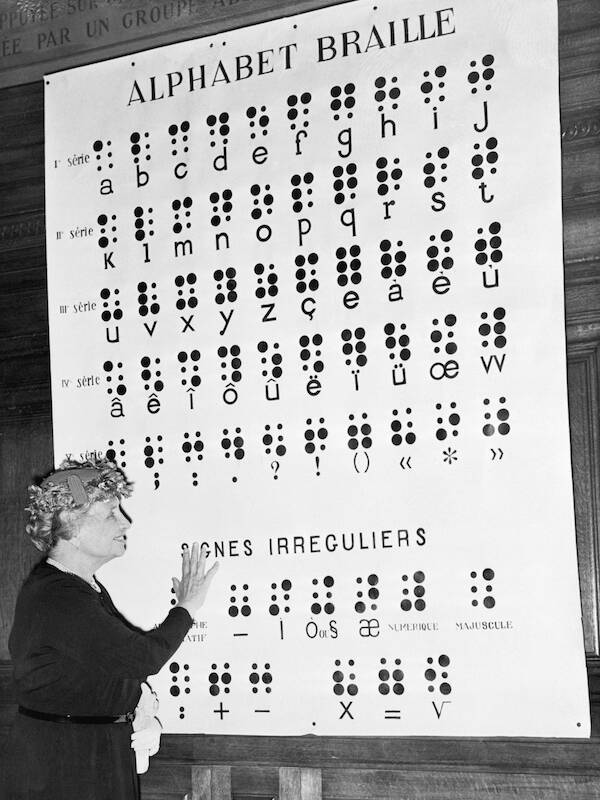 Getty ImagesHellen Keller points to a chart of the Braille alphabet during her speech at the Sorbonne, commemorating the 100th anniversary of the death of Louis Braille.

Braille solved the problem of alternative reading and writing systems that were complicated or impossible for blind people to read. And thanks to Braille typewriters, it soon became easy and affordable to print in Braille.

Louis Braille saw a larger purpose to his invention. A tool to communicate like Braille would break a centuries-old cycle, he declared.

“We do not need pity, nor do we need to be reminded that we are vulnerable,” Louis Braille told his friend Foucault. “We must be treated as equals – and communication is the way we can bring this about.”

Louis Braille created a communication system that transformed life for millions. Next, read about the invention of the telegraph, and then learn about Blind Tom Wiggins, the highest-paid musician in the 19th century.