Meet Lucretia Mott, The Courageous Quaker Who Wanted To Abolish Slavery And Give Women The Right To Vote

In the 19th century, Lucretia Mott made her mark on America as a trailblazing abolitionist and suffragist — who demanded equal rights for all. 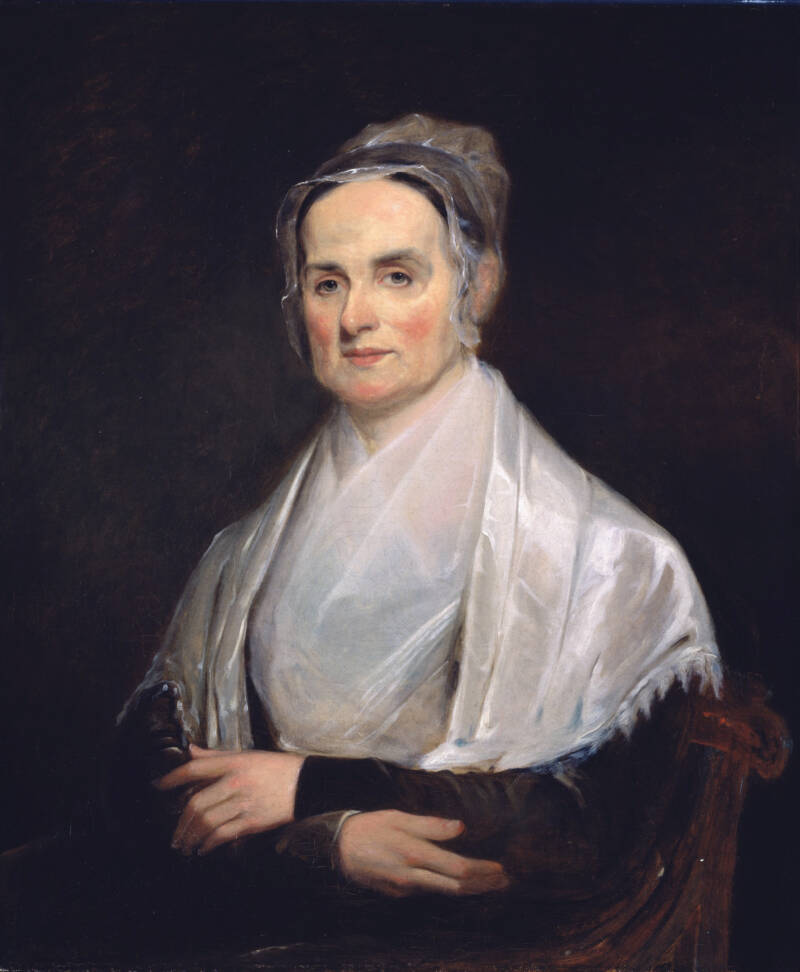 In the Quaker religion, men and women are considered equal in the eyes of God. So it came as quite the surprise to a teenaged Lucretia Mott that the Quaker boarding school she attended paid the male teachers more than the women.

This realization was the start of Mott’s lifelong fight for fairness and justice for the rights of the most disenfranchised — women and enslaved people.

Lucretia Mott co-founded the Philadelphia Female Anti-Slavery Society in 1833 and went on to help organize the 1848 Women’s Rights Convention in Seneca Falls, New York. The convention was the first of its kind and lasted two full days.

And Mott — along with four other women, including Elizabeth Cady Stanton — unveiled the Declaration of Sentiments, a document the women modeled after the Declaration of Independence. The resolutions that followed shaped the future of the women’s rights movement.

The Early Life Of Lucretia Mott

Lucretia Mott was born on Jan. 3, 1793 in Nantucket, Massachusetts. Her father, Thomas Coffin Jr., was in the whaling industry, and her mother, Anna Folger, ran a small store. Mott was a distant cousin of Benjamin Franklin.

Like many Quakers, Mott’s family boycotted the use of cotton cloth, cane sugar, and other goods that were created through the exploitation of enslaved people, as they considered slavery evil.

At the age of 13, Mott began attending Nine Partners School, a Quaker boarding school in Dutchess County, New York. She excelled academically as well as socially. Two years into her stay she met James Mott, a fellow abolitionist, and they became engaged. After her graduation, she accepted a position as an assistant teacher at the school.

However, something about her new job wasn’t quite fair.

“The charge for the education of girls was the same as that for boys, and that when they became teachers, women received but half as much as men for their services… The injustice of this was so apparent,” Mott recalled, according to the Library of Congress.

Mott’s family moved to Philadelphia in 1809, and she and James followed them. They married in 1811 when she was 18 years old. By age 28, Mott was traveling and working exclusively as a Quaker minister, eventually giving birth to six children with her husband.

However, that’s nowhere near the end of Lucretia Mott’s story.

The Anti-Slavery Society Convention Of 1840

In 1833, Mott attended the founding meeting of the American Anti-Slavery Society, at which her husband signed the convention’s declaration. However, many abolitionists still opposed including women in public activities — especially public speaking, which was one of Mott’s most well-honed talents.

Later that year, Mott and other women, both white and Black, founded the Philadelphia Female Anti-Slavery Society, an organization that supported the rights of both women and enslaved people. 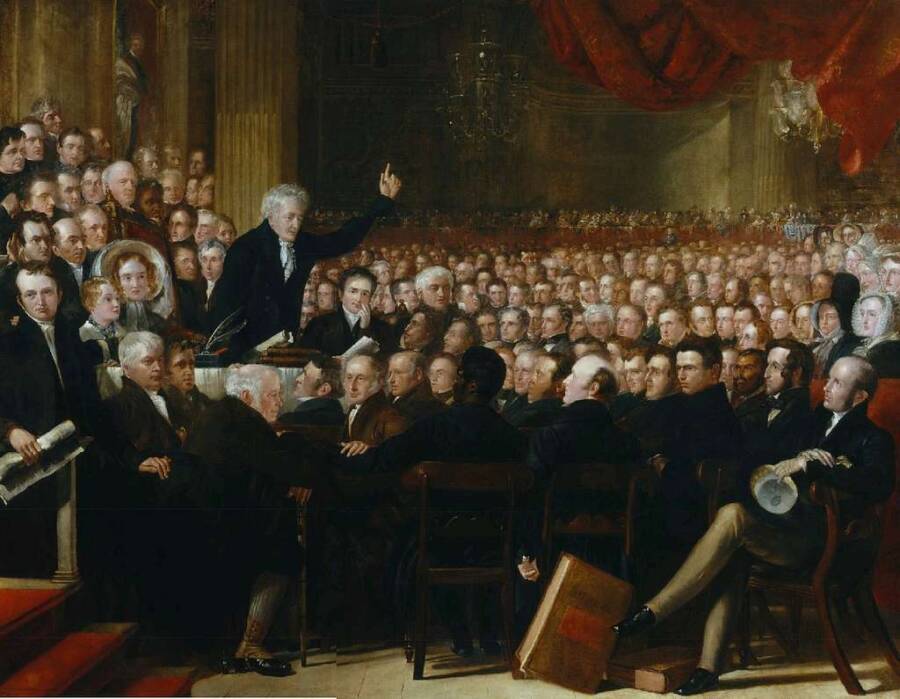 PicrylPainter Benjamin Robert Haydon’s rendering of the Anti-Slavery Society Convention of 1840. Haydon did not feature Mott prominently in his photo because he disagreed with her views.

In June 1840, Mott was in attendance at the World’s Anti-Slavery Convention in London as one of six women delegates. However, before the conference, the men held a vote to exclude the women from being a part of it.

When Mott and the other female delegates were told to sit in a segregated area, William Lloyd Garrison, Nathaniel Peabody Rogers, William Adam, and Charles Lenox Remond sat with the women in protest of the vote.

Elizabeth Cady Stanton also attended the convention, and she and Mott became fast friends and allies. It was in London, when the men excluded Mott and Stanton from participating, that the two came up with the idea to hold a women’s rights convention.

Both Mott and Stanton were committed to abolishing slavery, and the experience they gathered in working for this freedom seemed to solidify the need to push for full women’s rights as well. However, their idea didn’t come to fruition until eight years later in 1848.

Together with three other women — Mott’s sister Martha Coffin Wright, Mary Ann M’Clintock, and Jane C. Hunt — Mott and Stanton prepared the agenda. The main goal of the Seneca Falls Convention was to pass resolutions outlined in the Declaration of Sentiments, which Stanton penned.

The resolutions demanded that women be regarded as men’s equals and called on Americans to disregard any laws that placed women in an inferior position to men. They also called for women to have equal rights within the church and equal access to jobs.

The most controversial resolution of the declaration was granting women the right to vote. When some men found out this was included, they threatened to boycott the convention. According to the Constitution Center, even Stanton’s own husband disagreed vehemently with this resolution. She refused to remove it.

Lucretia Mott’s husband was the convention’s chairman, as, ironically, a woman as its leader would have been unacceptable at the time. That first day of the convention, 300 people showed up — 40 of whom were men. They were allowed to participate, but the organizers asked that they remain silent on the first day. This was exclusively time reserved for women to speak.

With Mott’s enchanting public speaking skills, 10 of the 11 resolutions passed swiftly on the second day. However, it was the right to vote that proved to be a sticking point for many.

It wasn’t until Frederick Douglass, a former slave, fierce abolitionist, and the only Black attendee, passionately spoke in favor of it that the tide began to turn. The resolution passed, though barely, and caused some to retract their support of the convention entirely. 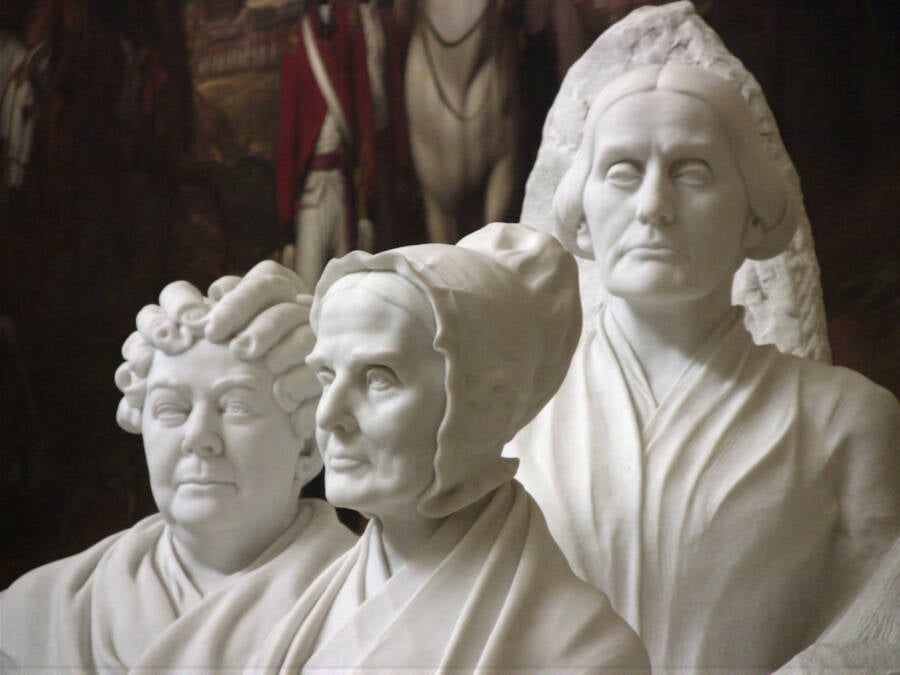 The Legacy Of Lucretia Mott

Mott worked tirelessly throughout her life to be a voice for the oppressed. She harshly criticized people who tried to disguise unfair, man-made rules as divine truths, as described in one of her more famous quotes:

“It is time that Christians were judged more by their likeness to Christ than their notions of Christ. Were this sentiment generally admitted we should not see such tenacious adherence to what men deem the opinions and doctrines of Christ while at the same time in every day practice is exhibited anything but a likeness to Christ”.

Mott herself credited her faith for much of her activism, once stating: “I do not want to show my faith by my words, or by my Quaker bonnet. I want that we may all show our faith by our works.”

And Mott certainly did show her faith by her works. According to the National Park Service, in 1866, Mott became the first president of the American Equal Rights Association, formed to achieve equality for both Black people and women. Her home was a station on the Underground Railroad. And when her husband finally found success as a cotton merchant after struggling to support their growing family for years, Mott convinced him to sell wool instead, as the cotton industry was supported by slave labor.

Mott died in 1880 at her home in Cheltenham, Pennsylvania. She was 87 years old. Though she didn’t survive to see the ratification of the 19th amendment in 1920 which gave women the right to vote, she was an indomitable force in history’s equality movements.

Her steadfast religious views and slight stature may have caused some to underestimate her, but her devotion and courage still resonate today. After all, Mott once said, “If our principles are right, why should we be cowards?”

Next, read up on the history of Juneteenth, the holiday celebrating the end of slavery. Then, find out more about the suffragists who defended their rights with jujutsu.