As the matriarch of the Barker-Karpis gang, Ma Barker oversaw her sons commit a spree of robberies, kidnappings, and murders that terrorized 1920s and '30s America. 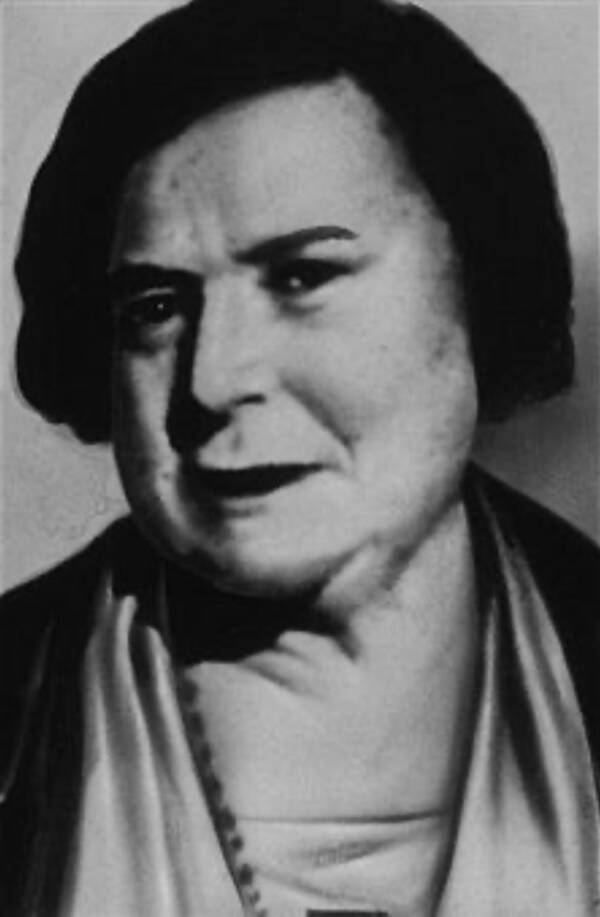 A strong-willed matriarch who allegedly helped organize her sons’ crimes, Kate Barker — better known as “Ma” Barker — was killed after a four-hour gun battle with FBI agents in Ocklawaha, Florida in 1935.

FBI Director J. Edgar Hoover described her as “the most vicious, dangerous, and resourceful criminal brain of the last decade.” However, Barker’s sons and other members of the Barker-Karpis gang denied that Ma played a crucial role in planning their many robberies, kidnappings, and murders.

Was Ma Barker a typical midwestern mother of four or a bloodthirsty criminal mastermind? Here’s how she became the FBI’s most wanted mother of the 1930s. 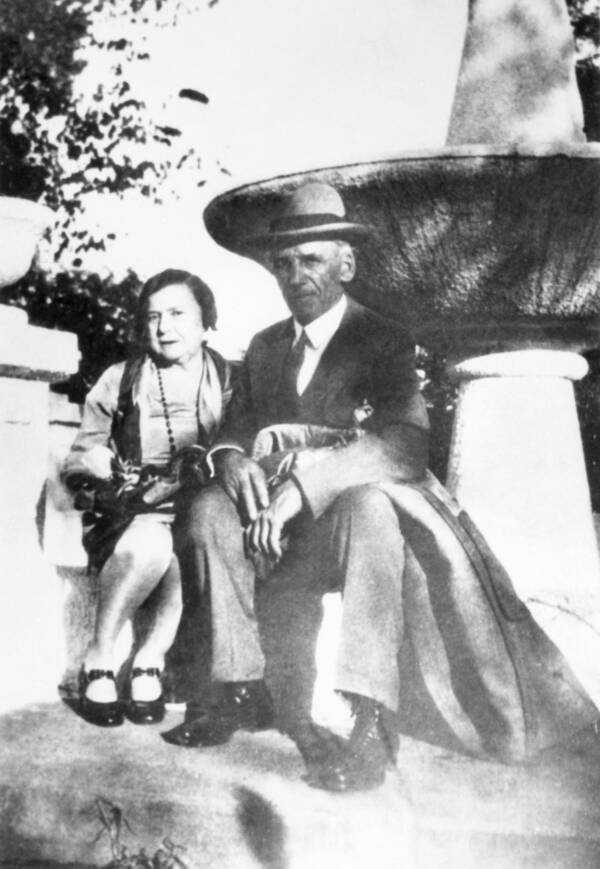 Getty ImagesMa Barker, shown here sitting with her friend Arthur Dunlop, died at age 61 in a shootout with the FBI.

Born Arizona Clark on Oct. 8, 1873 in Ash Grove, Missouri, Ma Barker was the daughter of Scotch-Irish parents John and Emaline Clark. An FBI report characterized her early life as “ordinary.”

According to legend, as a young girl Barker saw the outlaw Jesse James and his gang ride through her town. This event is supposed to have awakened her desire for adventure and life outside the law.

In 1892, she married George E. Barker and began using the first name Kate. Their early married life was spent in Aurora, Missouri where their four sons, Herman, Lloyd, Arthur, and Fred, were born. FBI reports describe George Barker as “more or less shiftless” and note that the couple lived in poverty.

Sometime around 1903 or 1904, the Barker family moved to Webb City, Missouri. They later moved to Tulsa, Oklahoma around the time Herman completed his grade school education.

Barker’s Sons Embark On A Life Of Crime 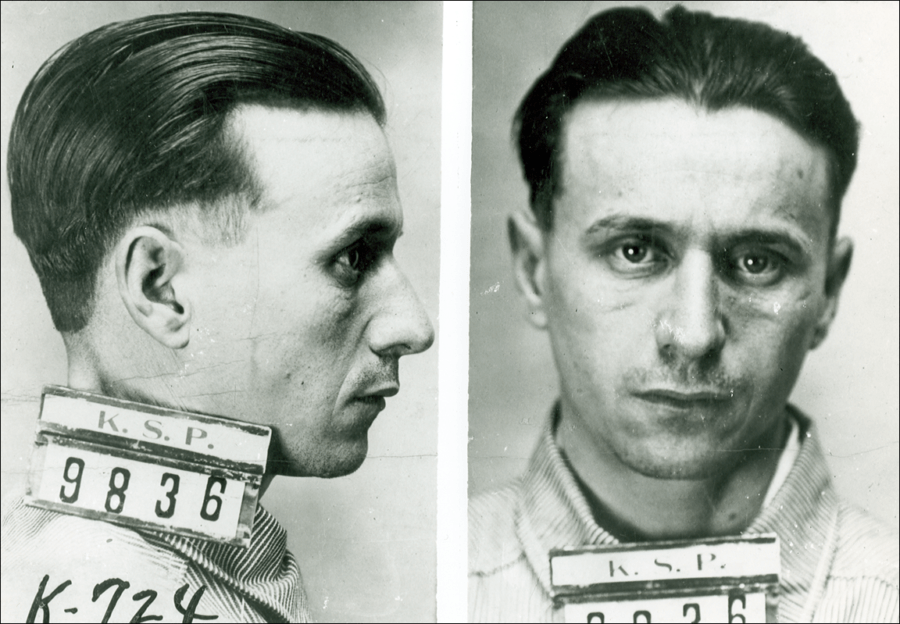 As they came of age, Ma Barker’s sons turned to a life of crime, as evidenced by Herman’s 1915 arrest in Joplin, Missouri for highway robbery.

Over the next several years, Herman, along with his three brothers, began hanging out with other hoodlums in the vicinity of the Old Lincoln Forsythe School in Tulsa, where they became members of the Central Park Gang.

Barker didn’t discourage her sons from their criminal enterprises, nor did she discipline them. She was known to often say, “If the good people of this town don’t like my boys, then the good people know what to do.” 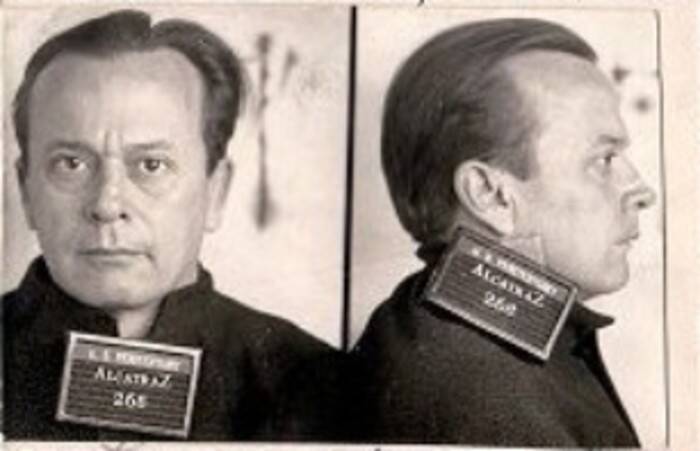 Wikimedia CommonsArthur Barker was killed when he tried to escape from Alcatraz Prison.

On Aug. 29, 1927, the eldest son, Herman, killed himself to avoid prosecution after committing a robbery and shooting a police officer in the mouth.

By 1928, all three remaining Barker brothers were incarcerated, with Lloyd serving time in a federal prison in Leavenworth, Kansas, Arthur in an Oklahoma State Penitentiary, and Fred in a Kansas State Prison.

Ma tossed out her husband around that same time and lived in abject poverty from 1928 to 1931 during her sons’ incarceration.

Things began looking up for Ma Barker in the spring of 1931 when Fred was unexpectedly released from prison on parole. Fred brought fellow prison inmate Alvin Karpis, alias “Old Creepy,” home with him; the two formed the Barker-Karpis Gang and used Ma Barker’s shack as their hideout.

On Dec. 18, 1931, Fred and Alvin robbed a department store in West Plains, Missouri. Fleeing the scene, they were accosted the following day Sheriff C. Roy Kelly at a garage while getting two flat tires fixed. 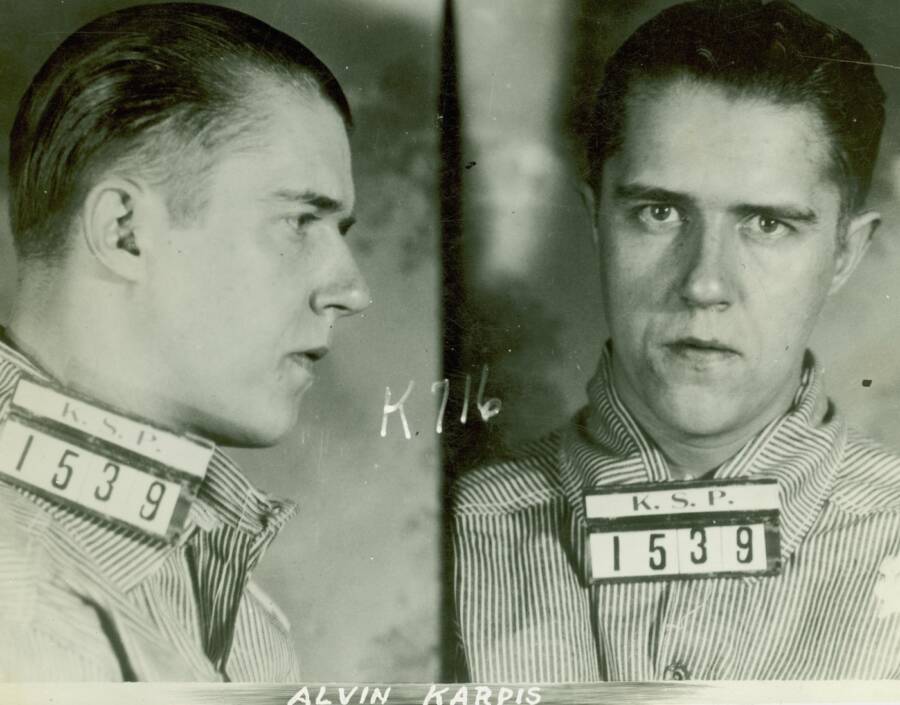 That event kicked off a series of crimes that would escalate in seriousness to include robbery, kidnapping, and murder. And for the first time, Ma Barker was officially recognized as an accomplice to the gang by law enforcement. A wanted poster was produced, offering a $100 reward for her capture.

In September 1932, Arthur and Lloyd were released from prison and joined Fred and Alvin. The gang moved to Chicago but left after a short period because Alvin didn’t want to work for Al Capone.

They moved to St. Paul, Minnesota because of the city’s reputation as a safe-haven for wanted criminals. It was there that the Barker-Karpis gang committed their more infamous crimes, eventually turning from bank robberies to kidnapping under the protection and guidance of Thomas Brown, the city’s corrupt chief of police.

In December 1932, the gang robbed the Third Northwestern National Bank in Minneapolis, but this heist ended in a violent shoot-out with police, killing two officers and one civilian. The gang managed to get away, and their reputation as a dangerous band of criminals grew.

The FBI connected the Barker-Karpis gang to the Hamm kidnapping by pulling fingerprints, a new technology at the time. Feeling the heat, the gang left St. Paul and returned to Chicago, where they tried to launder the ransom money.

Ma Barker Dies In A Hail Of Gunfire 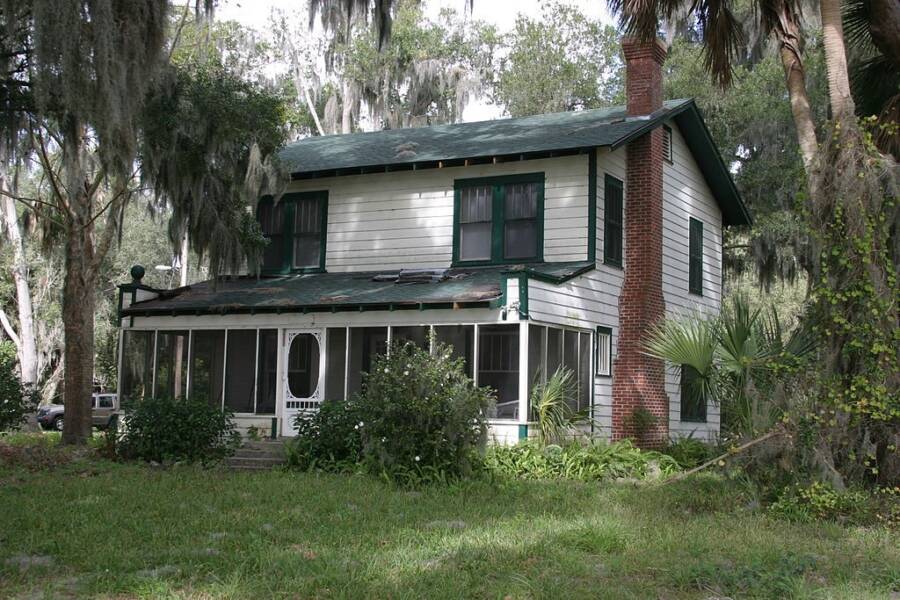 Wikimedia CommonsThe FBI gunned down Ma and Fred Barker in this Florida cottage.

On Jan. 8, 1935, Arthur Barker was arrested by FBI agents in Chicago. Authorities found a map belonging to Arthur and were able to determine that the other gang members were hiding out in Ocklawaha, Florida.

After about 15 minutes, the command to surrender was repeated, and a few minutes later, a voice from the house could be heard saying, “All right, go ahead.”

The special agents interpreted this to mean that the occupants were going to surrender. However, a few minutes later, machine-gun fire erupted from the house.

The agents returned fire using tear gas bombs, rifles, and machine-guns. Soon, cars full of high school students from Ocala, a town 20 miles north, were turning up to watch the gunfight. After about a four-hour gun battle, gunfire stopped coming from the house.

The FBI ordered Willie Woodbury, a local handyman, to enter the house while wearing a bulletproof vest. Agents entered the house after Woodbury announced that Ma and Fred Barker were both dead.

Both bodies were found in the front bedroom. Ma Barker died from a single bullet wound, and Fred’s body was riddled with bullets. A .45 caliber automatic pistol was found next to Fred’s body, and a machine gun lay at Ma Barker’s left hand. 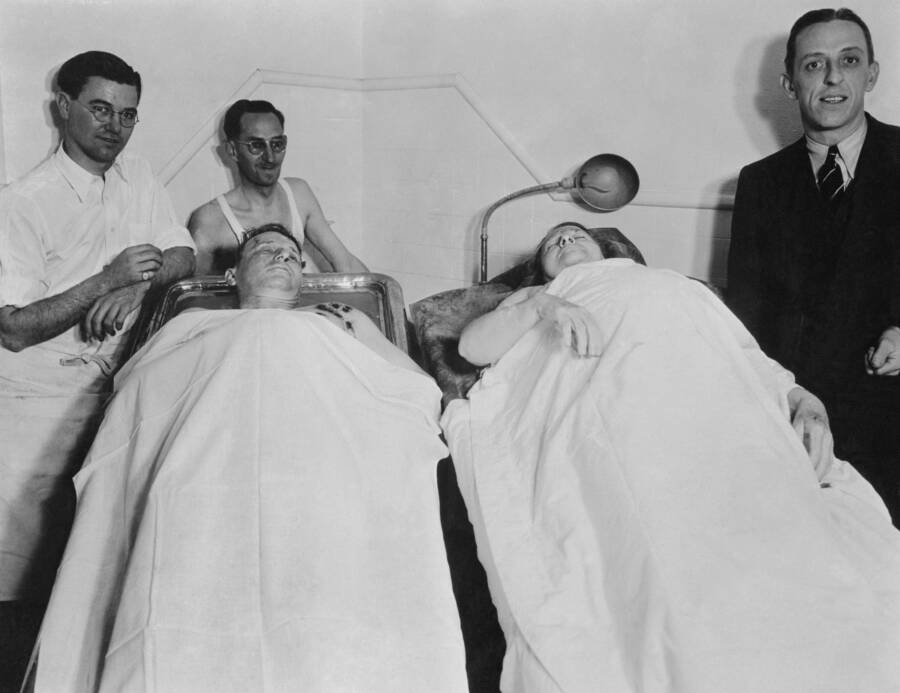 Getty ImagesBack in the 1930s, people would pose with the bodies of infamous criminals. They made no exception for Fred and Ma Barker after they were brought to a morgue in Ocala, Florida.

Additionally, an assortment of machine-gun drums, automatic pistol clips, and a large amount of ammunition was found in the home.

Ma and Fred Barker’s bodies were first put on public display, then remained unclaimed until Oct. 1, 1935, at which time relatives had them buried next to Herman Barker at Williams Timberhill Cemetery located in Welch, Oklahoma.

In the decades since her death, Ma Barker’s role as the leader and mastermind behind the Barker-Karpis gang has been depicted in several movies including the low-budget 1960 film Ma Barker’s Killer Brood, starring Lurene Tuttle, 1970’s Bloody Mama starring Shelley Winters and Robert De Niro, and Public Enemies, a 1996 film starring Theresa Russell.

1970’s Bloody Mama took many liberties with the facts of Ma Barker’s life.

However, there is some controversy regarding Ma Barker’s role as the leader and mastermind behind the success of the Barker-Karpis gang. Alvin Karpis asserted that J. Edgar Hoover, who described Barker as “the most vicious, dangerous, and resourceful criminal brain of the last decade,” encouraged the creation of the myth to justify the killing of an older woman.

Karpis claimed that Ma Barker was “just an old-fashioned homebody from the Ozarks… a simple woman,” adding that “Ma was superstitious, gullible, simple, cantankerous, and, well, generally law-abiding. She wasn’t suited for a role in the Karpis-Barker Gang.”

Karpis went on to write in his autobiography that “the most ridiculous story in the annals of crime is that Ma Barker was the mastermind behind the Karpis-Barker gang.”

Continuing, he wrote, “She wasn’t a leader of criminals or even a criminal herself… She knew we were criminals, but her participation in our careers was limited to one function: when we traveled together, we moved as a mother and her sons. What could look more innocent?”

After learning about the rough-and-tumble life of Ma Barker, check out some more female gangsters. Then take a look at 55 vintage mugshots of early 20th-century female criminals.