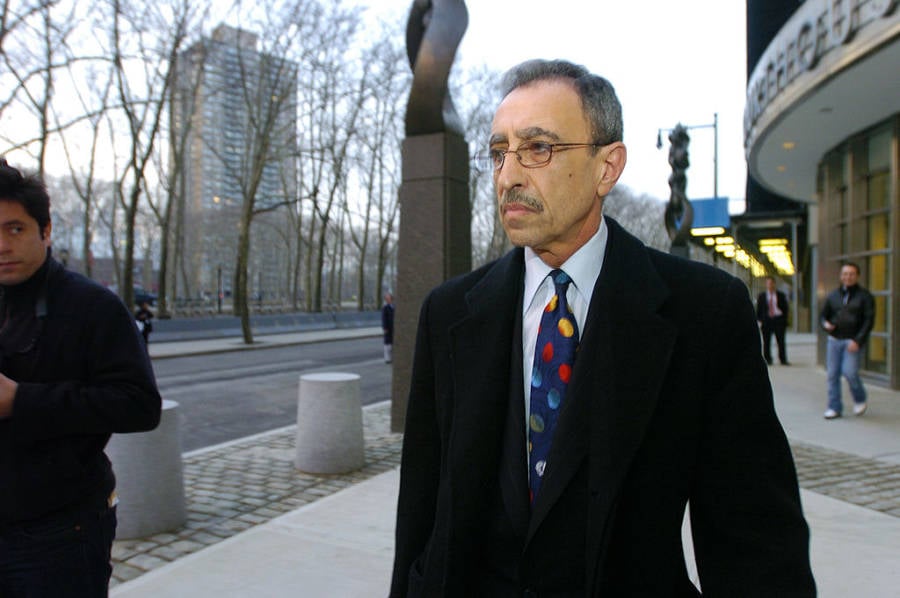 Linda Rosier/NY Daily News Archive via Getty ImagesMafia cop Stephen Caracappa leaves Brooklyn Federal Court where he and fellow retired Detective Louis Eppolito were on trial, accused of killing for the mob and selling confidential information that resulted in the murders of informants and suspected informants.

Stephen Caracappa, an NYPD cop who murdered and leaked police information for the mafia, died in prison on Saturday.

The 75-year-old and his partner, Louis Eppolito, had been given life sentences in 2009 after committing at least eight murders for the Italian mob from 1986 to 1990.

While a member of Brooklyn’s Organized Crime Homicide Unit, Caracappa was paid $375,000 by the Lucchese crime family to leak information and kill members of opposing mobs — as well as a diamond dealer, a painters’ union leader and a man suspected of leaking mob information to law enforcement.

“I have two detectives that work the major squad team for the New York Police Department,” Casso told 60 Minutes‘ Ed Bradley during a prison interview in 1998. “Lou Eppolito and Steve — he’s got a long last name, Ca…Capis…”

Already convicted for 36 murders himself, Casso spoke freely of the crimes the cops had committed on his orders.

“They put him in the car,” he said — referring to Caracappa and Eppolito’s kidnapping of Jimmy Hydell, a rival crime family associate.

“The kid thought they were taking him to the station-house. But they took him to a garage. When they got to the garage, they laid him on the floor; they tied his feet, his handcuffs, put him in the trunk of the car. After that, I killed the kid myself. At the time, I gave Louis and Steve I think $45,000 for delivering him to me.”

Casso apparently hoped his cooperation would lead to a reduction of his life sentence. It didn’t and cops were unable to prove the allegations at the time.

In 2005, though, Brooklyn gangster Burton Kaplan decided to flip sides. His testimony against Caracappa and Eppolito was crucial to their conviction.

“It’s ludicrous,” Caracappa said during his own 60 Minutes interview a month after the trial. “Anybody that knows me, knows I love the police department. I couldn’t kill anybody. I shot a guy once on the job, and I still think about it. It bothers me.”

But that feigned morality couldn’t stack up against the growing mountain of evidence:

Hydell’s mother remembered the detectives coming to her house and asking about her son a few hours before he was killed.

A garage worker showed investigators the site where he said Caracappa and Eppolito had buried a body in Brooklyn.

“They killed him, like, cowboy style,” he said. “They pulled alongside of him. They shot him. They made him crash into the fence alongside the Belt Parkway on the service road.”

Lino was found in broad daylight, slumped over his steering wheel and covered with nine bullet holes. 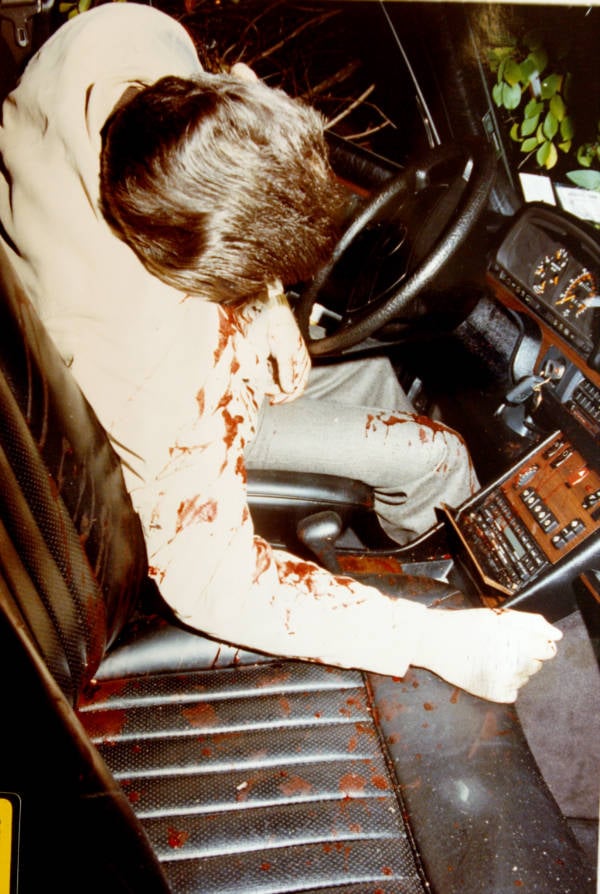 There was also a paper trail.

Caracappa had used police computers to track down information on the whereabouts of Casso’s enemies — including Nicholas Guido.

Looking back through Caracappa’s search history, investigators saw that he had actually pulled the address of a different Nicholas Guido — mistakenly leading Casso to kill an innocent man.

“I don’t know if it’s a coincidence,” Caracappa said of the murder of a random man unassociated with mob activity whose address he had printed off the computer just days before his death. “But, if I did anything and I had to run a name, it’s down on paper and it’s documented why I did it…. And, who I did it for. And, I definitely didn’t do it for any wise guy.”

When huge crackdowns in the mid-1990’s led to arrests in every major New York crime family, Eppolito and Caracappa decided it would be a good time to move to Las Vegas.

Though they claimed to have retired, it was later proven that they spent the ’90s dealing drugs and unsuccessfully plotting to kill multiple former mob members.

Eppolito — who was actually related to several prominent crime family members (a fact he had failed to disclose on his police application) — also enjoyed writing and acting.

In 1992, he wrote a book titled “Mafia Cop: The Story of an Honest Cop Whose Family Was in the Mob,” in which he describes how hard it was to rise above a life of crime. 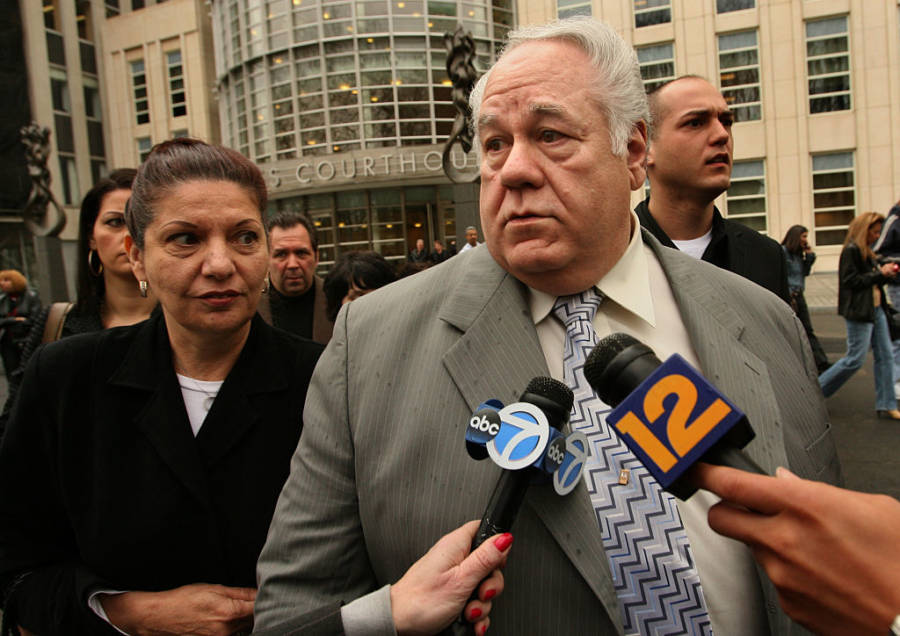 Carolyn Cole/Los Angeles Times via Getty ImagesRetired New York detective and author of the book “Marfia Cop,” Louis J. Eppolito on trial in Brooklyn, New York for committing drug crimes in Las Vegas and eight Brooklyn murders done for the mob. He leaves the courthouse for lunch with his wife, Fran and other family members.

The city spent $18.4 million to settle lawsuits with the families of Caracappa and Eppolito’s victims.

“These two lowlifes shot and killed my father,” Edward Lino’s son yelled at their sentencing. “May you have a long life in prison.”

In the end, though, Caracappa wouldn’t even serve a decade.

In 2016 he wrote Federal Judge Jack Weinstein a letter, begging for a “compassionate release.”

“Please know I have been fighting the case in the courts,” the handwritten petition reads. “I have stage 4 cancer and will not survive.”

“There is nothing I can do in your case.” 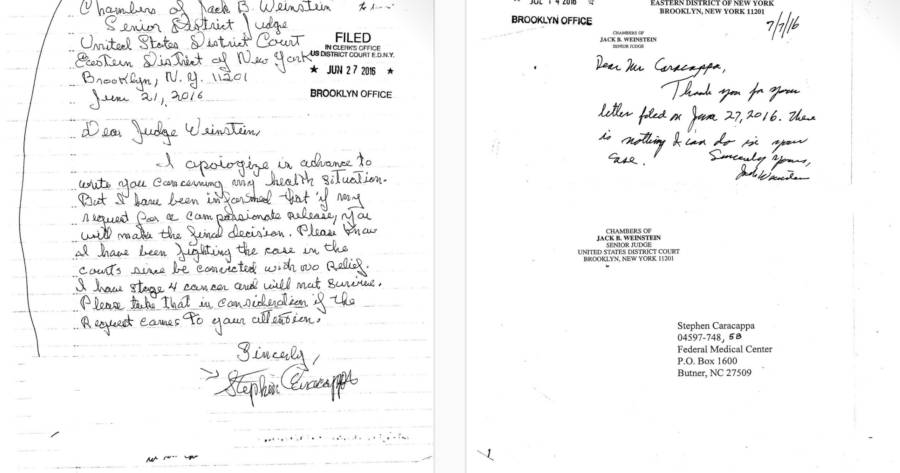 Next, read about three of the most ruthless, powerful gangsters alive today. Then, check out these female gangsters who stole and killed their way into The Underworld.