The Horrifying Practice Of Trepanation 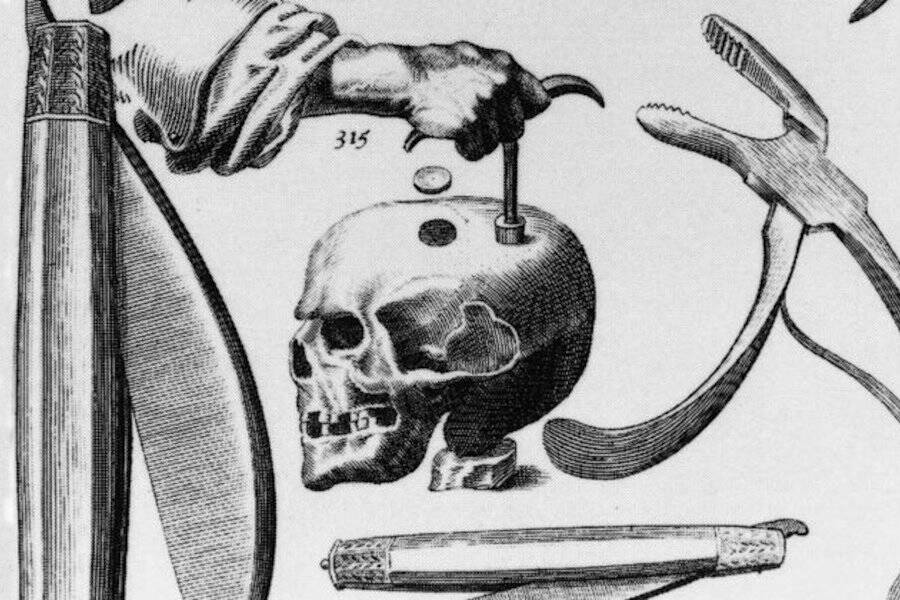 MITMedieval doctors believed trepanning (or drilling) the skull could alleviate a roster of ailments.

Trepanation might sound like nervous hesitation, but the medieval surgery was far more gruesome than that. Derived from the Latin trepanum, which translates to “borer,” the aptly named primitive practice led medieval doctors to drill holes into the skulls of their patients to alleviate a variety of ailments — from seizures to migraines.

Physicians believed exposing the dura mater membrane of the brain and spinal cord to fresh air would help cure people of their afflictions. Doctors used a roster of crude instruments to do so, from rocks and wooden tools to metal clamps and drills. Preparations naturally included shaving part of the ailing patient’s head.

Trepanations were often conducted for issues like epilepsy or demonic possession. The medieval custom had ancient roots, however, having been performed by civilizations across the globe for millennia. According to Dr. Miguel A. Faria Jr. of Surgical Neurology International, it might have even been the first medical procedure in history.

“Trephination (or trepanation) of the human skull is the oldest documented surgical procedure performed by man,” Faria Jr. wrote in Surgical Neurology International. “Trephined skulls have been found from the Old World of Europe and Asia to the New World, particularly Peru and South America, from the Neolithic age to the very dawn of history.”

Modern historians first learned of the surgery’s historical scope after American diplomat E.G. Squier found a trepanned skull in Peru in the 1860s. He noted that the skull showed signs of regrowth, meaning the patient had survived the ordeal — before researchers around the world unearthed further examples of the practice.

From Ancient Greece and Rome to Africa, South America, and the South Pacific, trepanations were more common than previously thought. While many were conducted to relieve pressure or remove skull fragments after an accident, others were utterly misguided — and failed to exorcise people of their demons.