Meet The Mercy Dogs, The Unsung Canine Heroes Of World War I

Mercy dogs, also known as casualty dogs, were first used by the German Army to help find wounded soldiers on the battlefield and to comfort the dying. 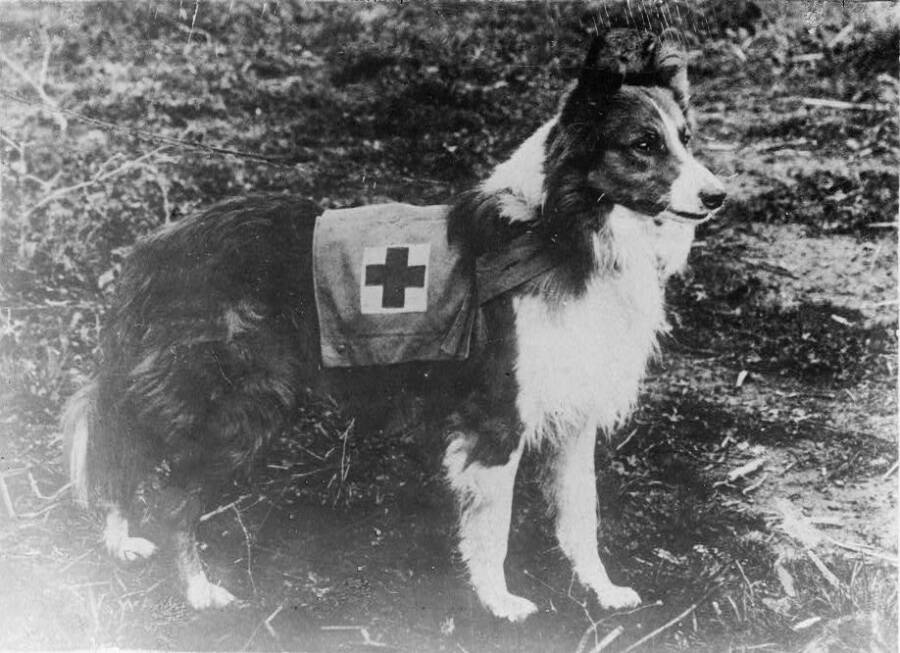 For wounded soldiers in No Man’s Land during World War I, few things could bring more comfort than the gentle nudge of a wet nose. The arrival of a mercy dog meant help was coming.

These dogs scoured fields following a battle in search of soldiers to help. Most carried medical supplies on their back; some obligingly wore gas masks. When they found a badly wounded man, they picked up a piece of his uniform in their teeth and ran with it back to camp.

Sometimes mercy dogs found someone beyond saving. In that case, these loyal canines stuck by the soldier’s side as he died, offering him final moments of companionship and comfort.

These are the mercy dogs of World War I who lived — and died — alongside human soldiers.

Humans have been using dogs in wars for thousands of years. Murals in ancient Egypt depict dogs in battle, and accounts written by ancient Greeks mention dogs “protected with coats of mail.”

But a new idea started to emerge in 1890. Then, a German dog lover and painter named Jean Bungartz founded the Deutschen Verein für Santiätshunde or German Association for Medical Dogs. He envisioned training dogs who could help find wounded soldiers.

The idea for santiätshunde — or medical dogs — leaped to Britain five years later. In 1895, Major Edwin Richardson encountered a man buying English dogs to ship back to Germany. 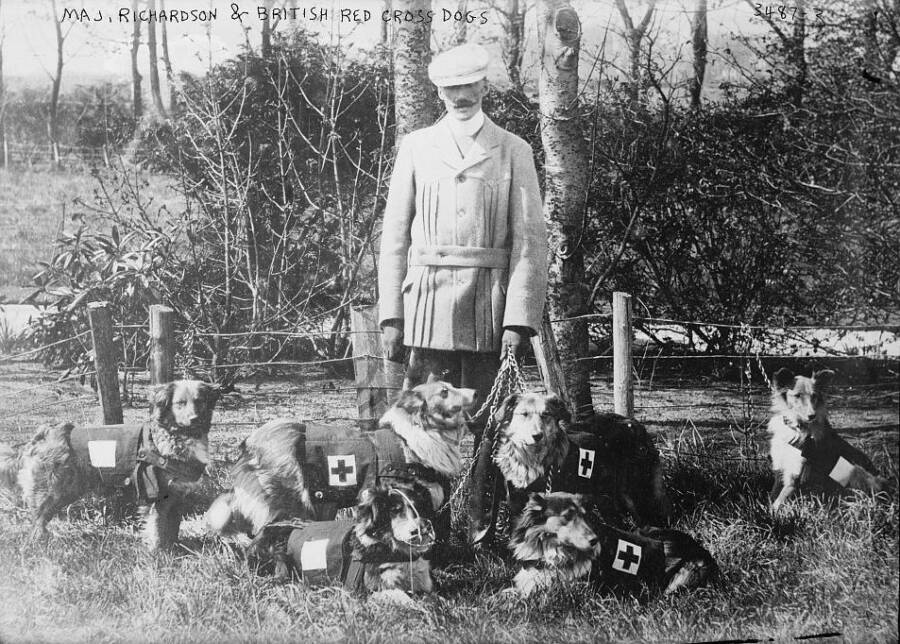 Library of CongressBritish mercy dogs were largely trained by Major Edwin Richardson for service in WWI.

“I took notice of a ‘foreigner’ buying a sheepdog from a shepherd and learned that the man was a German, sent over by his government to purchase large quantities of collie dogs for the German Army,” Richardson recounted.

“I was told that these dogs were found to be excellent for the work required and that they had nothing in Germany, which could compare with them.”

Richardson, a dog lover like Bungartz, started to experiment with dogs to see if they could be useful during war. At the nearby Barry Buddon army camp, he fastened them with saddlebags and had them bring spirits to volunteer soldiers. Terriers and collies were good, Richardson decided, but Airedales were the “ideal.”

In 1914, he and his wife opened the British War Dog School — and got to work.

“Shells from batteries at practice were screaming overhead, and army motor lorries passed to and fro,” said one journalist who visited the school “The dogs are trained to the constant sound of the guns and very soon learn to take no heed of them.” 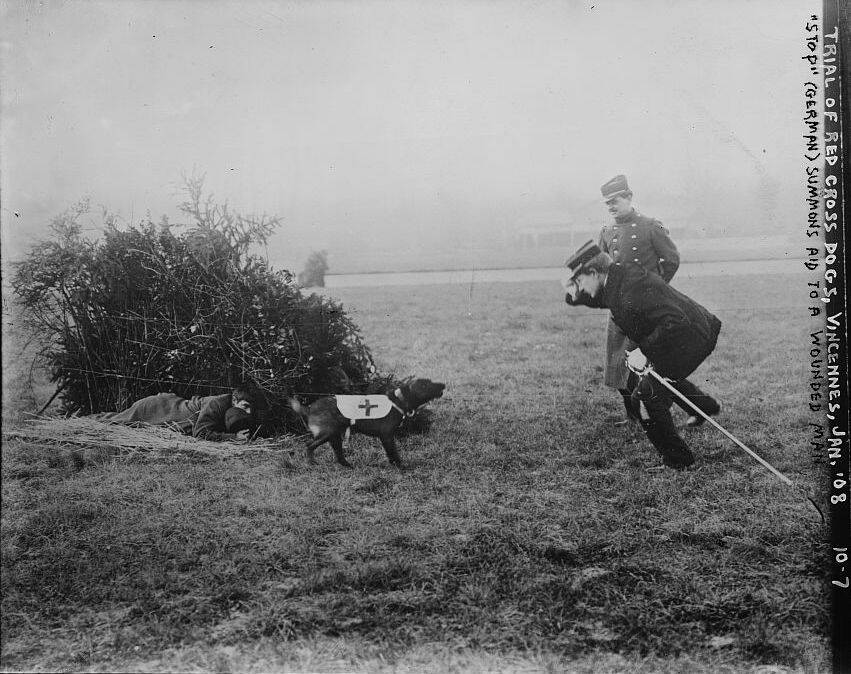 Library of CongressA “trial” of a Red Cross dog learning to help the wounded. 1908.

The dogs were trained to do more than that. They also learned to find people — Richardson paid unemployed locals to lie in the woods — pass by dead bodies, wear gas masks, and even ignore German uniforms.

When World War I broke out, dogs from Britain, France, and Germany were sent to the front. There, these mercy dogs would save thousands of lives.

Mercy Dogs During World War I

And as men poured into the trenches during WWI, so did dogs. During the four bloody years of conflict, the two sides used more than 50,000 dogs. 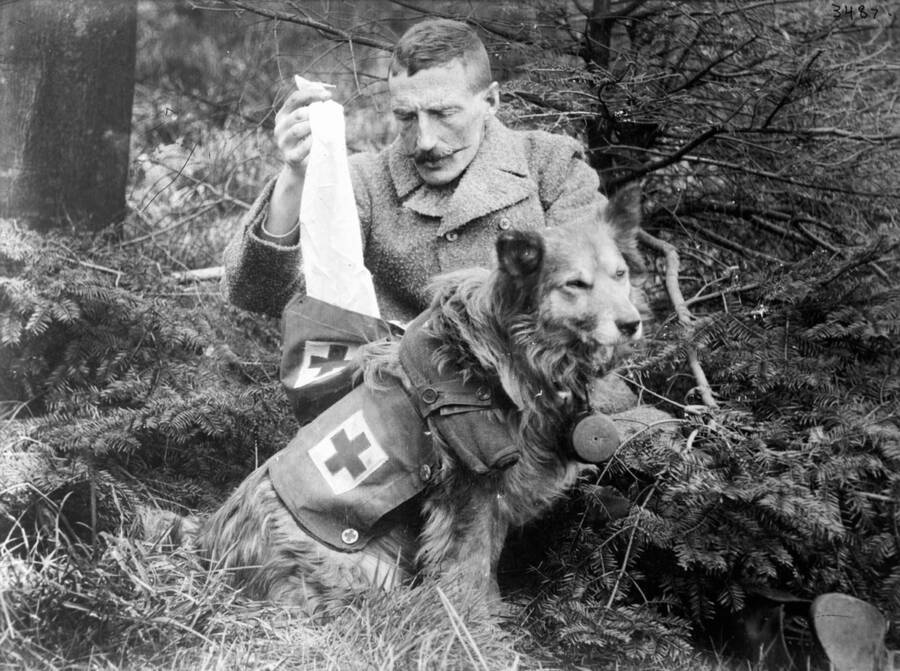 Some of them were Richard’s Airedales. Others were German Shepherds, Doberman Pinschers, Boxers, and other breeds. Called mercy dogs, Red Cross dogs, ambulance dogs, or casualty dogs, their job started as soon as soldiers started stumbling back from battles.

Then, these specially trained dogs took to the field. They carried medical supplies on their backs which allowed a wounded soldier to treat himself. When they found someone badly wounded, the dogs would pick up a piece of his uniform and race back to camp to alert others.

“Here at last is help, here is first aid. [The soldier] knows that medical assistance cannot be far away, and will be summoned by every means in the dog’s power.”

“It was a pitch-dark night with heavy fog,” starts one 1915 account of German santiätshunde in the New York Times.

“At the command, ‘Hunt the wounded!’ the dogs dashed ahead into the woods, we following them as rapidly as possible … it wasn’t long before we heard barking… the dogs came running back to meet us and guided us until we came upon one poor devil who lay on the ground groaning, his eyes fixed on the dog…

“And so it went all night long, till we had thoroughly searched the battlefield. Fourteen wounded were found in the dark woods by our dogs who could never have been found by our ambulance men and would have been left to their fate. You cannot picture the horror of it.”

Indeed, the dogs often alerted other soldiers to men clinging to life — ones that humans might dismiss as beyond saving.

“They sometimes lead us to the bodies we think have no life in them, but when we bring them back to the doctors… they always find a spark,” wrote one surgeon “It is purely a matter of their instinct, [which] is far more effective than man’s reasoning powers.”

Other times, the dogs comforted the dying. They lay next to the fatally wounded man so that he didn’t die alone. 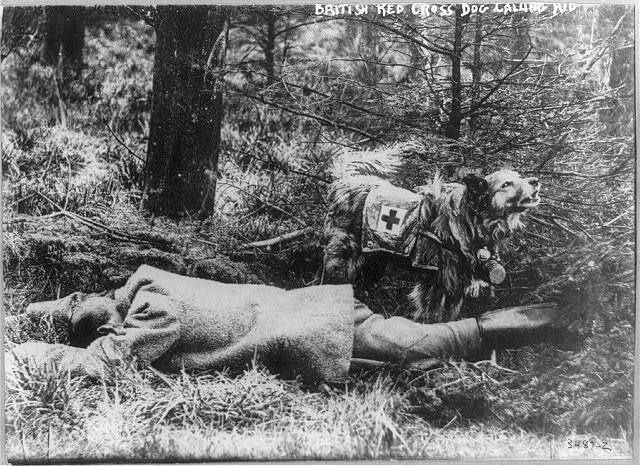 Some of these mercy dogs even became famous. Sergeant Stubby, a rare American dog, learned to alert soldiers about incoming mustard gas and helped search for the wounded. And a German shepherd puppy bred to be a mercy dog but nearly killed in a bombing grew up to become the American movie star, Rin Tin Tin.

Most mercy dogs, however, toiled anonymously. And large numbers of them died during the war. By the time the conflict came to an end in 1918, some 7,000 mercy dogs had been killed.

The Enduring Legacy Of Wartime Canines

As the 20th century charged on, humans frequently used dogs during wartime. During World War II, canines returned to the fields of battle as mercy dogs, guards, messengers, and scouts. The US alone employed some 20,000 dogs in the U.S. Army, Coast Guard, and Marine Corps. 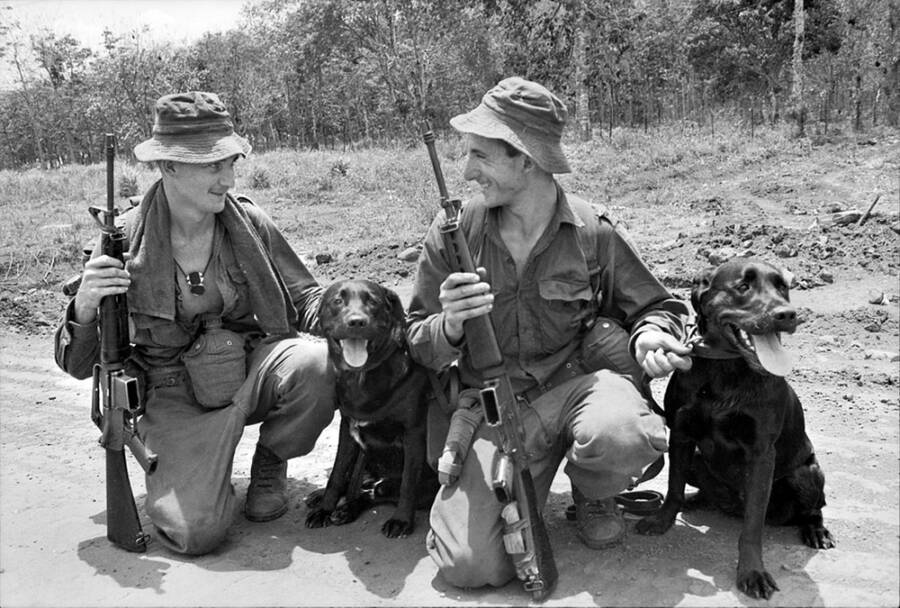 Australian War MemorialDogs with their handlers in Vietnam.

Dogs served in later conflicts, too. During the Vietnam war, they helped soldiers sniff out Viet Cong tunnels. And during wars in Iraq and Afghanistan, dogs used their keen sense of smell to identify IEDs.

Since WWII, dogs have also been used to bring comfort to soldiers. The Red Cross started using therapy dogs with soldiers convalescing after battle in the 1940s. Today, they help soldiers battling conditions like PTSD.

In that way, the legacy of WWI’s mercy dogs lives on. These brave canines brought desperately needed help to soldiers wounded in No Man’s Land. What’s more, they brought comfort.

To a wounded man, their presence meant help was coming. To a dying one, their soft fur, gentle breath, and beating heart meant that the man wouldn’t have to die alone.

After all, there’s a reason why dogs are called man’s best friend.

After reading about mercy dogs, learn about some human heroes. See how Corrie ten Boom saved 800 Jews during the Holocaust. Or discover the story of Edith Cavell, the WWI nurse who saved soldiers on both sides of the conflict.