Over three feet of hail fell onto the unsuspecting town of Guadalajara in Mexico — and many are pointing the finger at climate change. 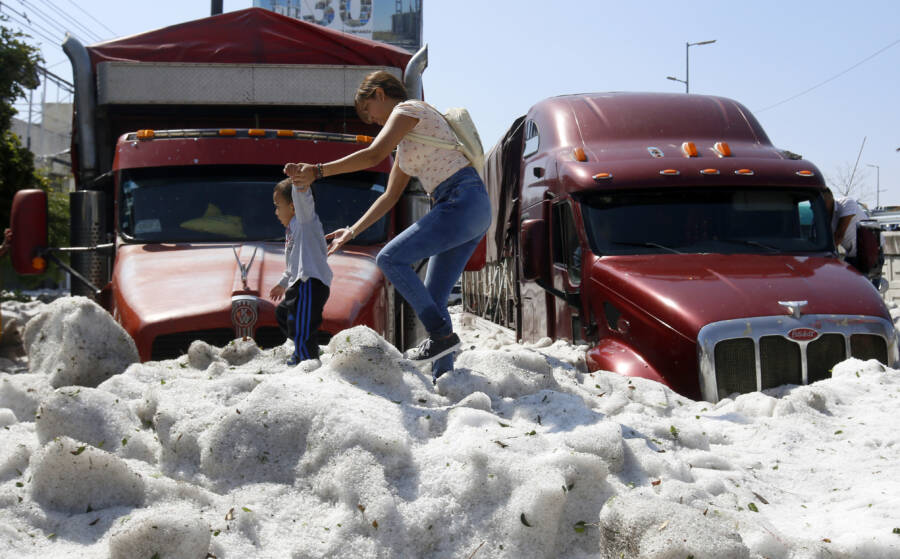 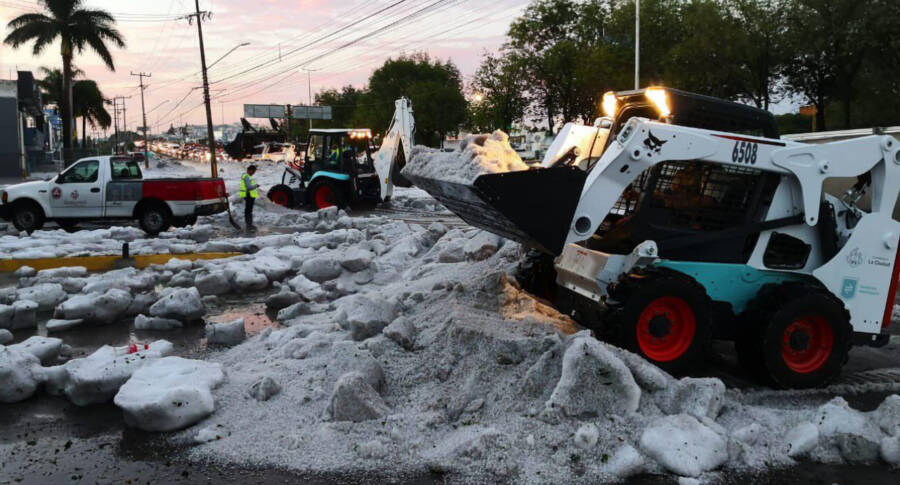 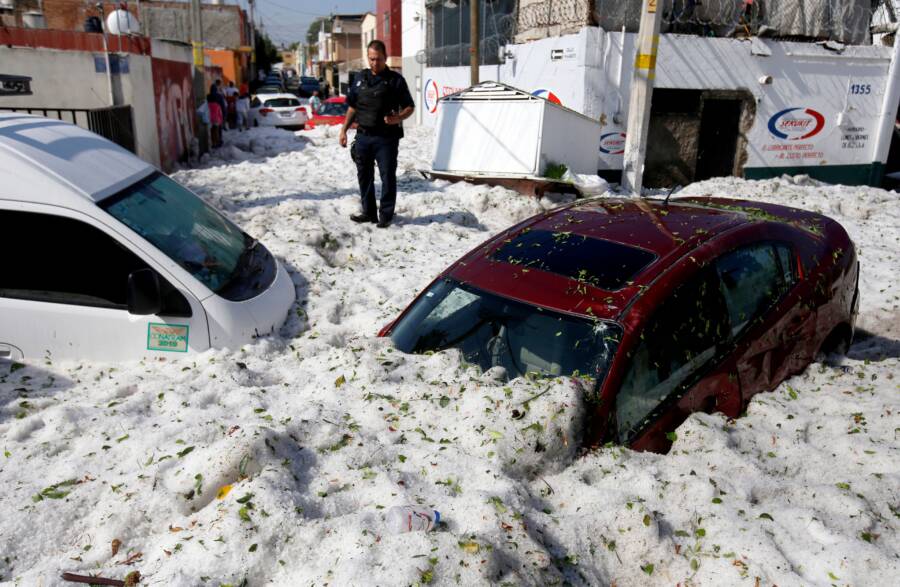 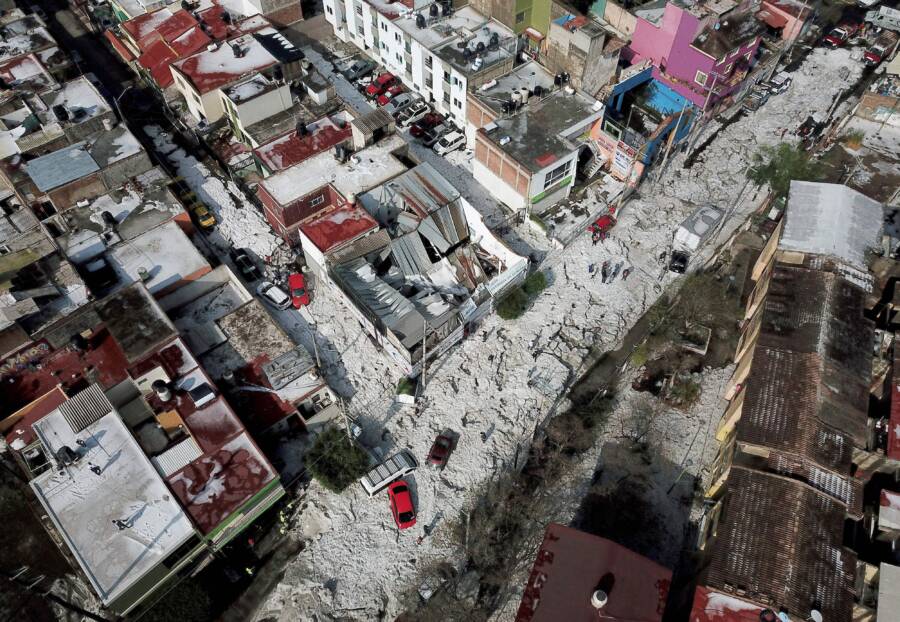 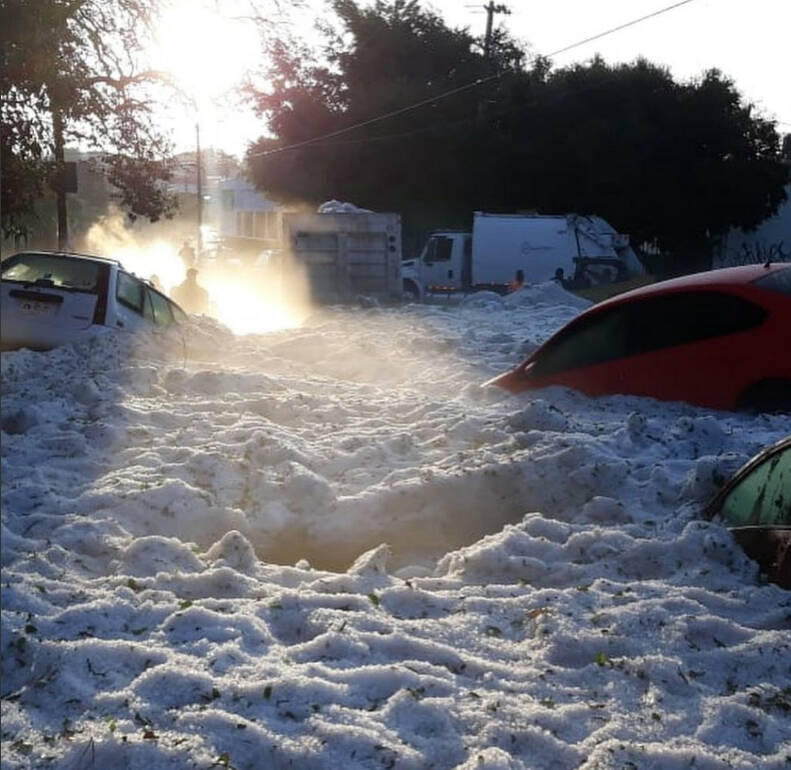 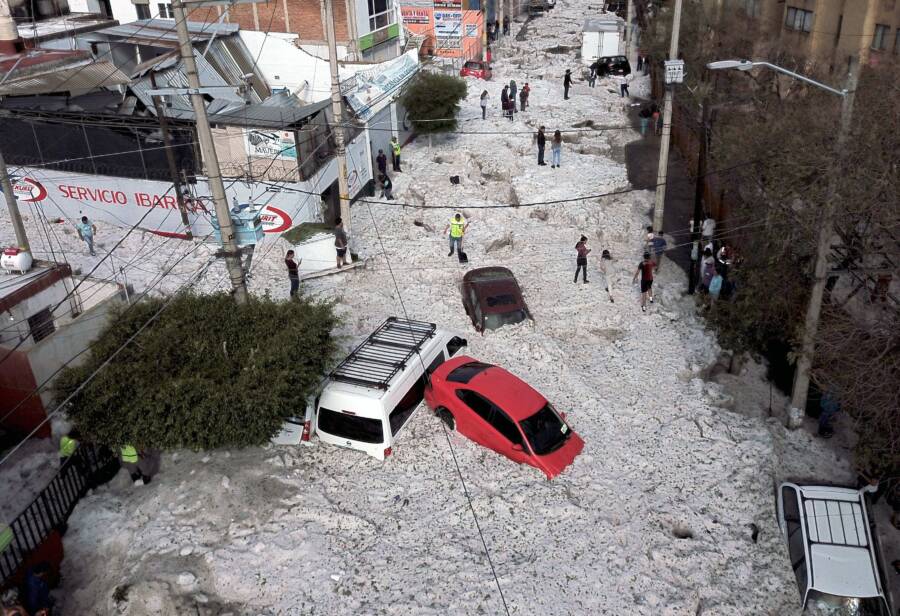 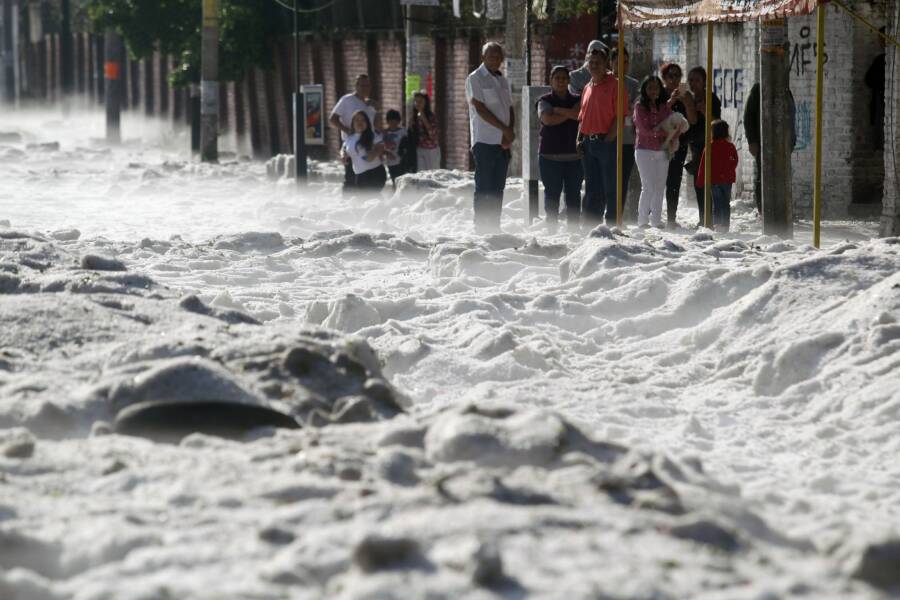 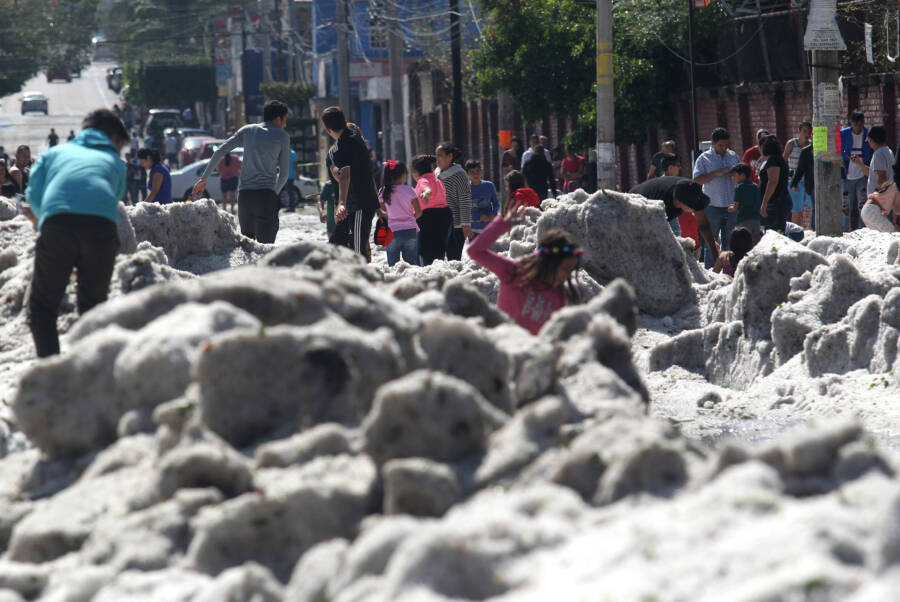 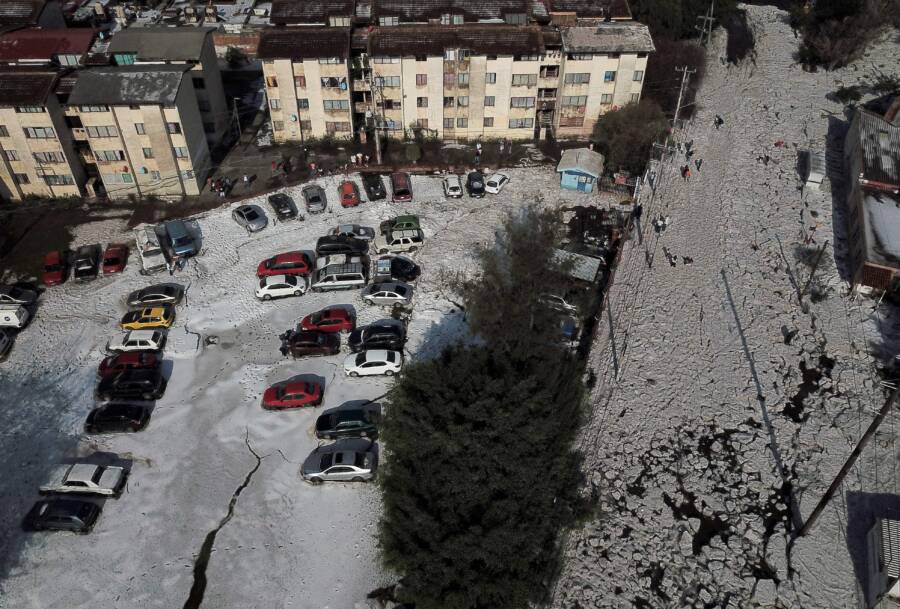 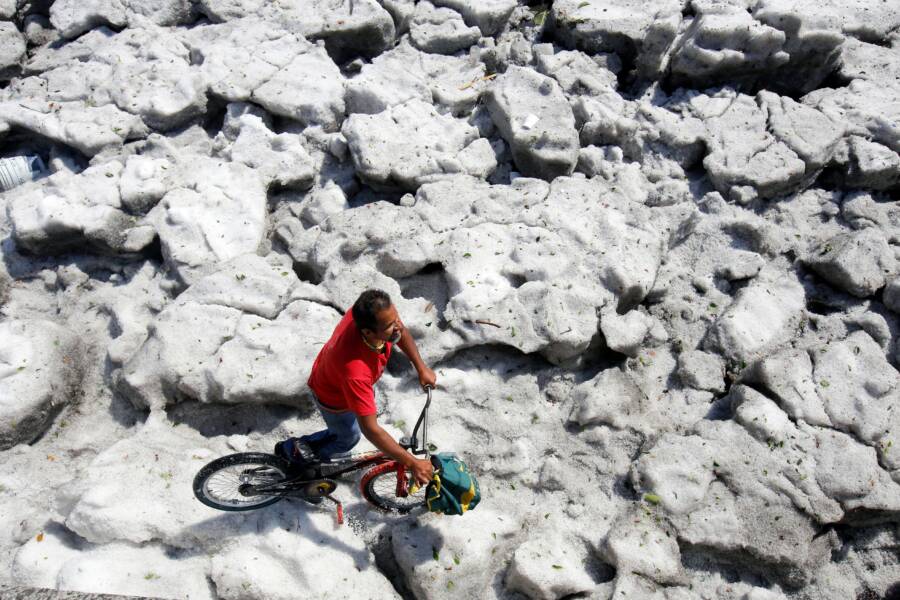 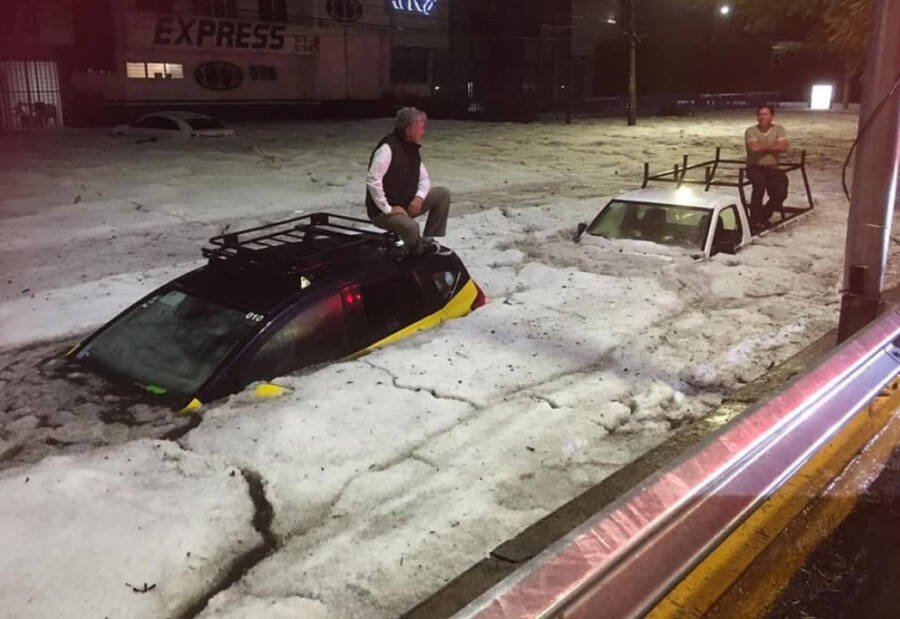 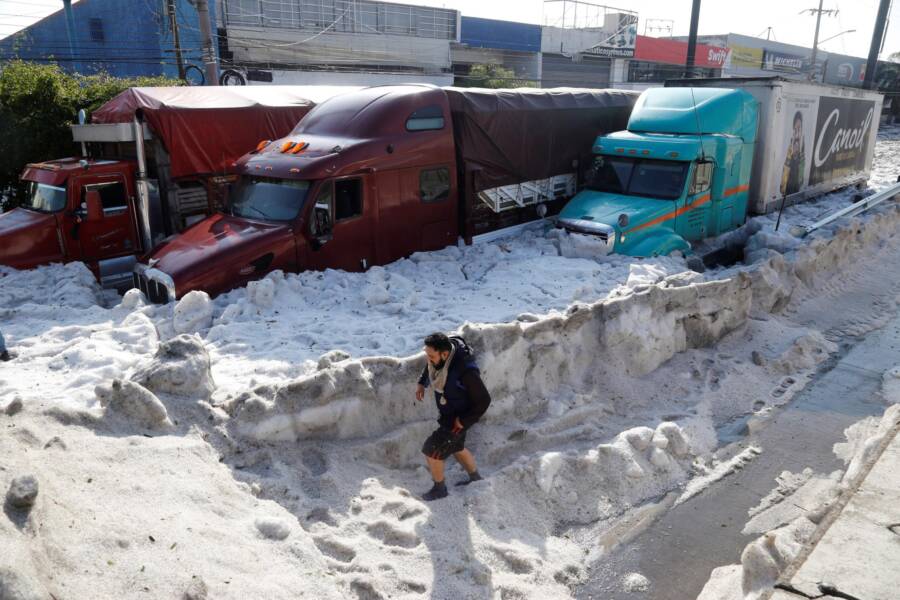 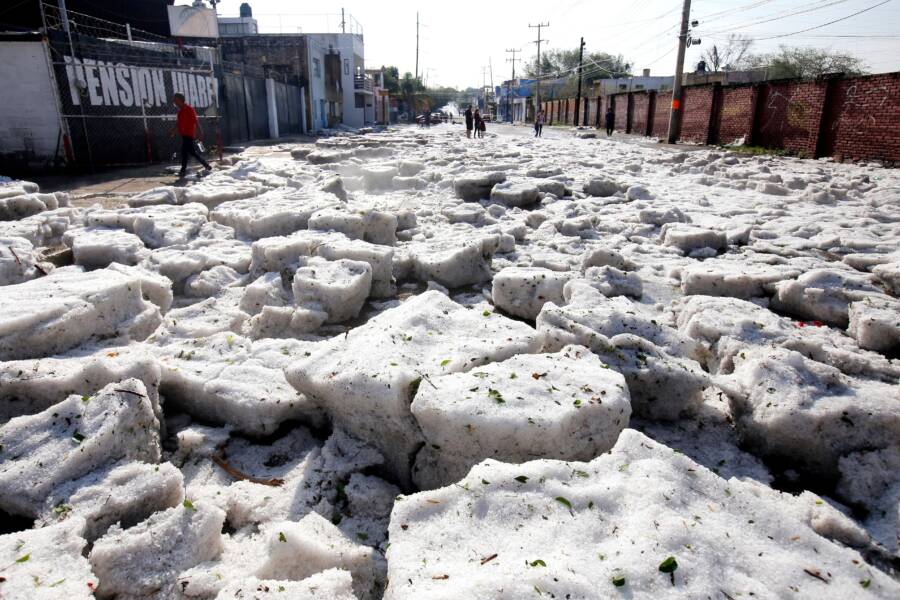 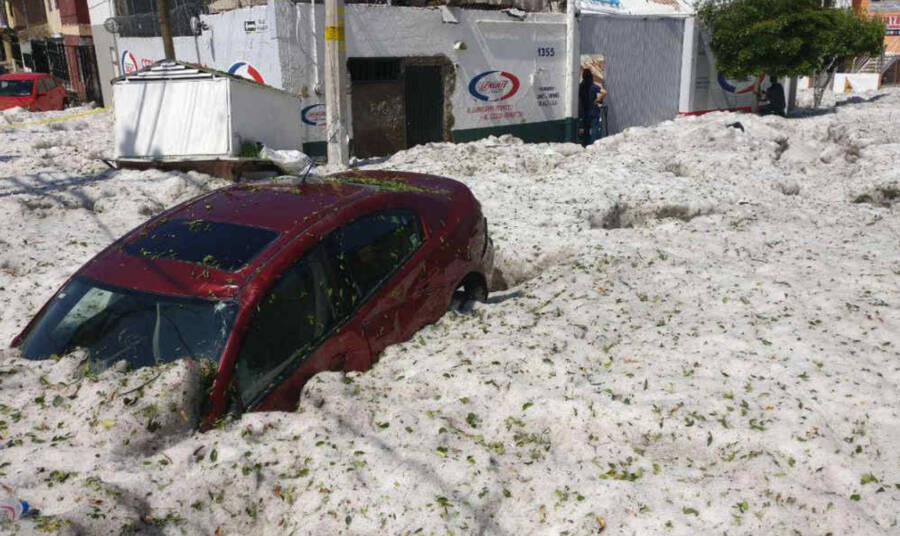 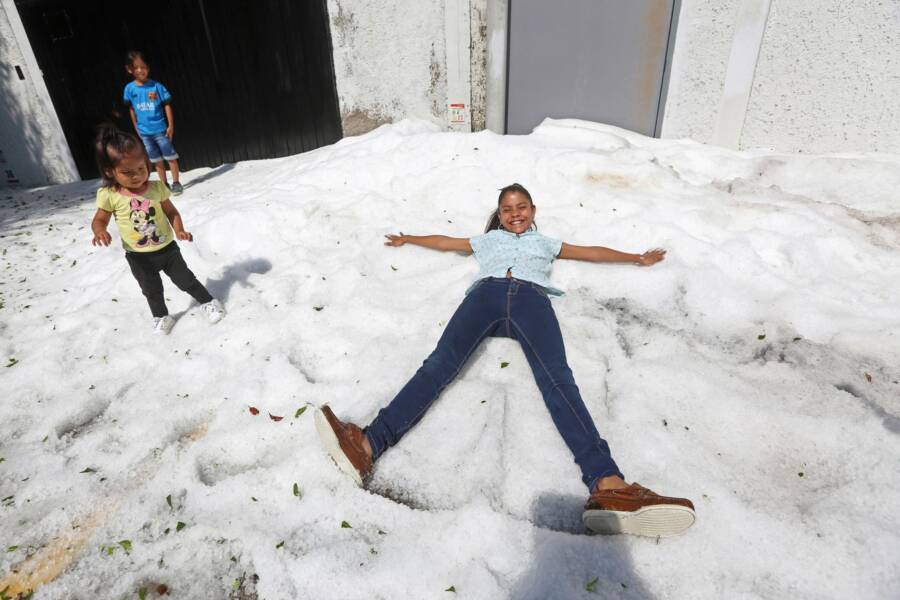 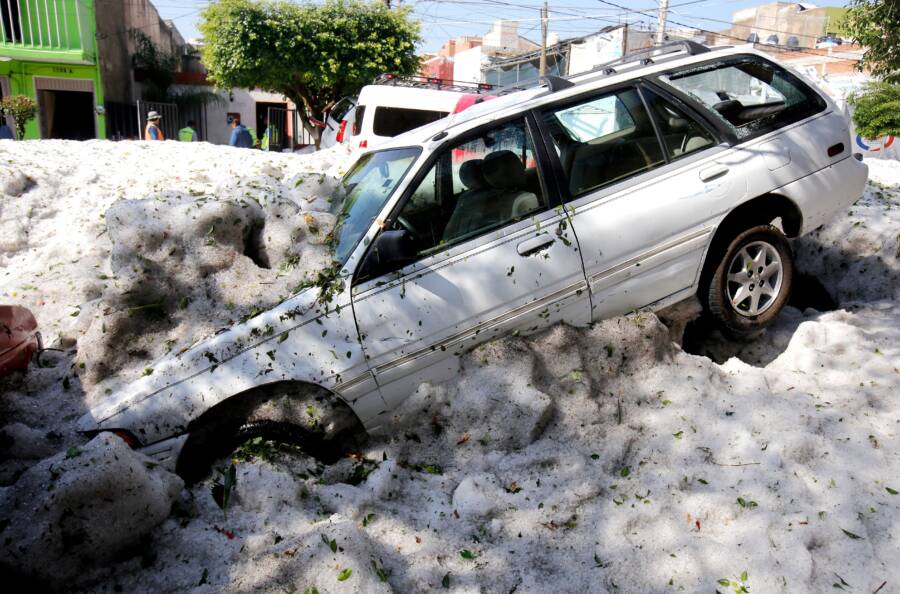 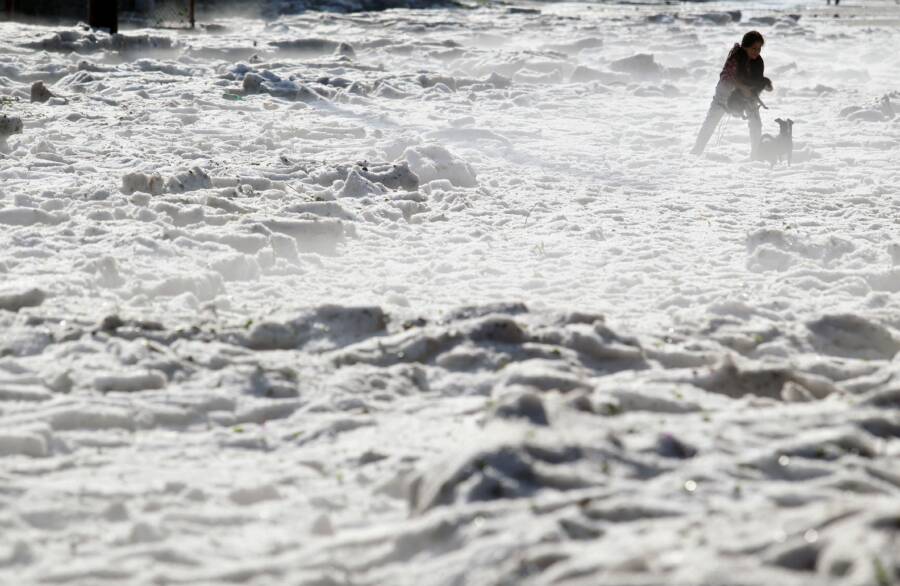 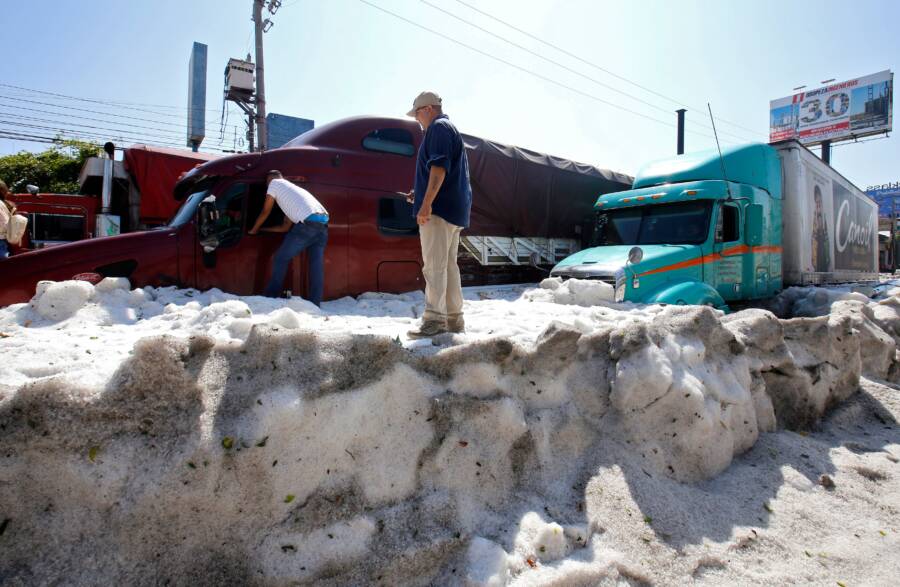 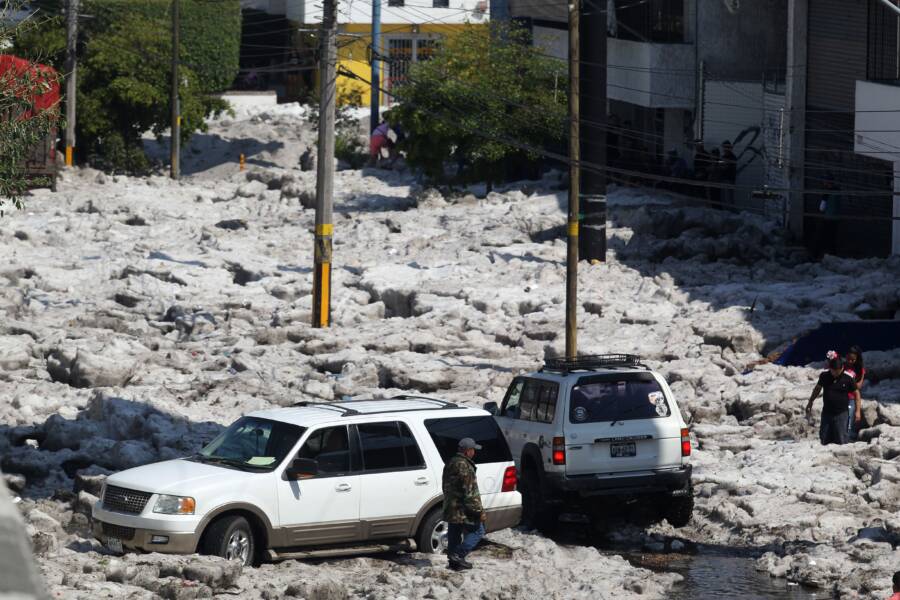 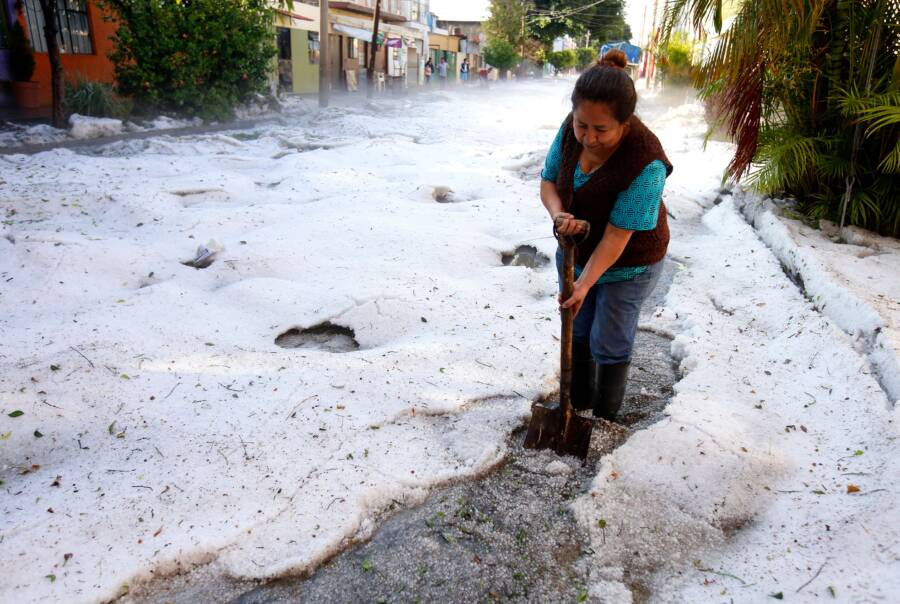 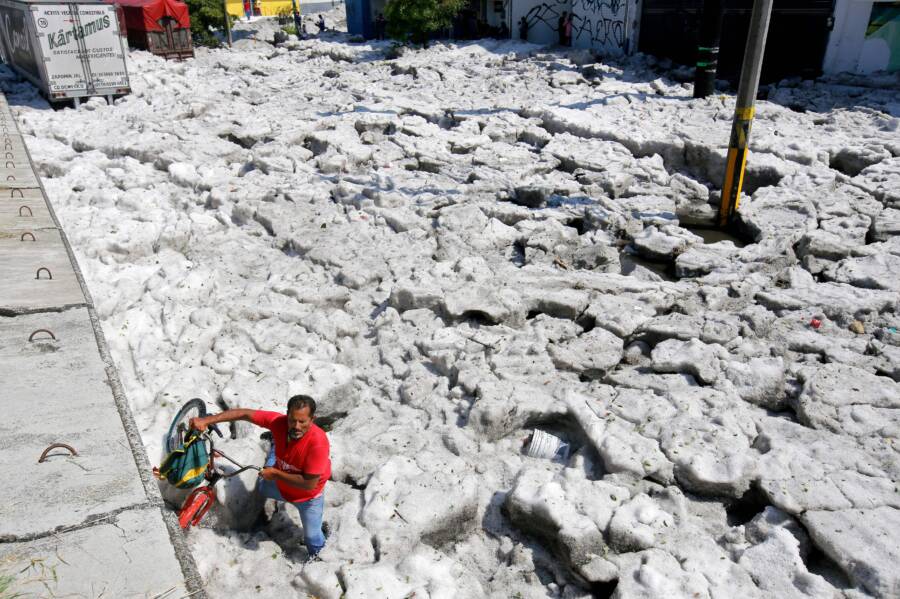 One of Mexico's most populated cities got a huge surprise on Sunday in the unprecedented form of ice.

Three feet of hail and rain filled the streets of Guadalajara and trapped cars while causing locals to gaze in wonder. Thankfully, there were no fatalities from this Mexican hail storm and temperatures are expected to go back into the 80s the rest of the week.

The Mexican hail storm began around 1:30 a.m. and blanketed neighborhoods in the southwest area of the Jalisco capital — such as Rancho Blanco, Álamos Oriente, and Álamo Industrial.

KEEP ON TRUCKIN': An unusually large amount of hail fell during a severe thunderstorm early Sunday morning in Tlaquepaque, Mexico, where hailstones accumulated in some areas on top of dangerous flash flooding. https://abcn.ws/2J0OjXO

Though intense in quantity, the hail was relatively small in size; about one centimeter in diameter. Pellets likely melted on contact with the warm ground, forming a layer of water on which more could float. The subsequent flooding will likely cause its own set of issues in the coming days.

"I've never seen such scenes in Guadalajara," said the state Governor, Enrique Alfaro. "Then we ask ourselves if climate change is real. These are never-before-seen natural phenomena," he continued. "It's incredible."

Was The Mexican Hail Storm Really Global Warming At Work?

While climate change is of catastrophic concern the short answer is no.

The hail storm was certainly a spectacle, but not a sign of the end of times.

Hail storms occur when warm, moist air from the Earth's surface rises. Temperatures high in the atmosphere can get below freezing and ice crystals can grow alongside the supercooled water. This forms ice pellets that come back down as hail when the conditions are right for a storm. Therefore, summer is not an uncommon time for hail storms.

Yes, extreme precipitation will become more common as climate change causes the Earth to heat up. A warmer atmosphere can hold more moisture; therefore rain will likely become more frequent. However, it is largely unknown what global warming means in terms of hail. We can't make assumptions that this will be the new normal.

As far as Guadalajara is concerned, this hailstorm just ushered in the beginning of their wet season. A band of yearly thunderstorm systems encircles the globe, known as the Intertropical Convergence Zone. It essentially moves North and South during the year and in the summertime, Central Mexico sees rain and hail. It's the sheer amount of hail that makes this a record-breaking, standout storm.

The Mexican hail storm was quite a worldwide weather sensation and cleaning up the damages will likely take a while. The storms caused damage to over 450 homes and many cars. The city, home to 1.5 million residents, used civil protection machinery and shovels to help clear the streets of the mountains of hail. Some of these areas reached up to five feet high.

A truck struggles to get through up to FIVE FEET of hail in Guadalajara, Mexico. Holy whoa!

The problematic pellets blocked drains which prevented the escape of rainwater. Flooding occurred quite quickly in several areas which then caused hail to pile up. This all spelled a lot of headaches for the adults, but there are photos of kids enjoying themselves in the off-season winter wonderland.

Governor Alfaro assures everyone that the "government is working on the clean-up and removal of hail from public streets as well as supporting citizens who suffered damage to their homes," he wrote.

Next, read about the Sea Tornado that caused China to see marine animals rain from the sky. Then, peruse these photos of New Orleans taken ten years after the deadly Hurricane Katrina.