Giant goldfish are wreaking havoc in Minnesota and across the country because people dump their pets in lakes and ponds. 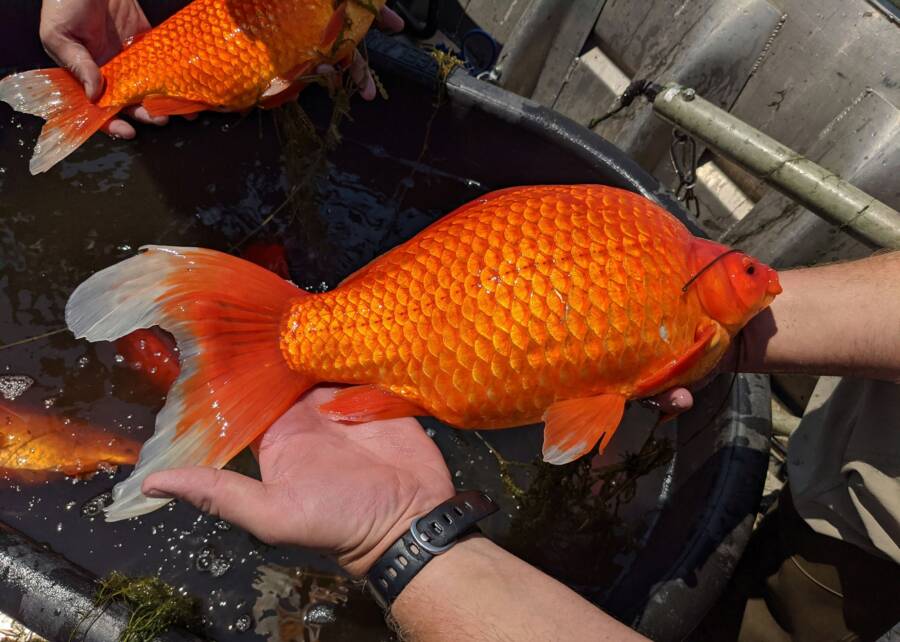 Goldfish seem harmless — and a bit boring — when trapped in a fishbowl. But it only takes the freedom of a lake or a pond for these popular pets to grow to astounding sizes. After finding a number of giant goldfish in a local lake, officials in Minnesota are reiterating warnings about dumping goldfish in the wild.

“Please don’t release your pet goldfish into ponds and lakes!” The city of Burnside, Minnesota begged in a tweet.

“They grow bigger than you think and contribute to poor water quality by mucking up the bottom sediments and uprooting plants.”

To prove their point, the city also posted a number of the shockingly large goldfish that they’d recovered from Lake Keller. The fish were the size of a “football” and weighed around four pounds.

For reference, the goldfish found in pet stores are usually only 0.2 to 0.6 pounds. 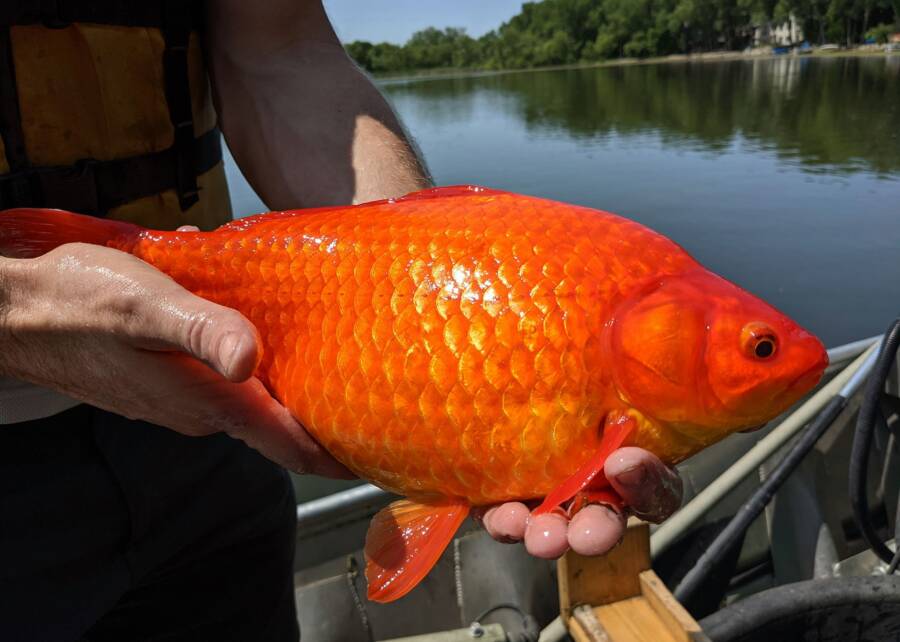 Officials were first alerted to the giant goldfish in Lake Keller after a number of civilian complaints.

“We had some reports from residents of some increasingly large groups of goldfish out on the lake,” said Burnsville natural resources specialist Caleb Ashling.

“Folks were seeing them from shore, or if they were out kayaking, they would catch a glimpse of them when they were out in their boat.”

After teaming up with the nearby town of Apple Valley, Burnside called in a company called Carp Solutions to investigate. They were stunned by what they found.

Before long, they were pulling huge goldfish from the waters of Lake Keller. In the first week, they caught 10 giant goldfish. In the second, they caught 18 more.

“You see goldfish in the store and they’re these small little fish,” Ashling commented. “When you pull a goldfish about the size of a football out of the lake, it makes you wonder how this can even be the same type of animal.” 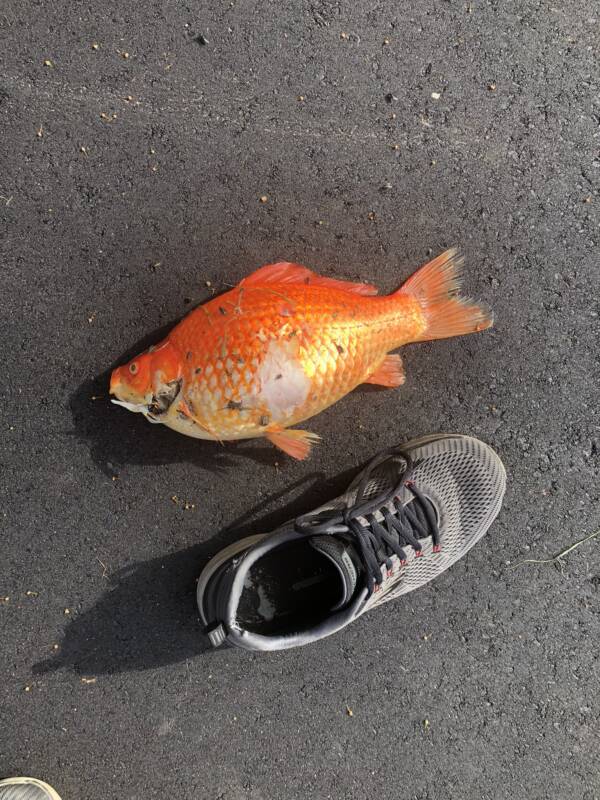 Josh Holt/TwitterA Minnesota resident replied to the City of Burnside’s tweet with a goldfish he’d found a few years ago.

Though perhaps a dull pet, goldfish can wreak havoc in the wild. They look for food by rooting up lake bottoms, which stirs up clouds of sediment and destroys native plants.

“If you have a lot of goldfish and carp in the lake, usually the first thing that happens is all the aquatic plants disappear,” noted Przemek Bajer, the owner of Carp Solutions and a research assistant professor at the University of Minnesota.

Plus, goldfish are hardy. “They are a tough species,” explained Daryl Jacobson, the natural resources manager for the city of Burnsville. “They can survive under ice, with low oxygen, and in unclear water.”

The city of Burnside isn’t the only place in Minnesota struggling to remove giant goldfish from its lakes. One Minnesota county estimates that they removed “close to 100,000 goldfish” from their lakes last year.

And the problem isn’t limited to Minnesota, either. In May 2021, a fisherman in Virginia caught a goldfish that weighed three pounds and nine ounces. 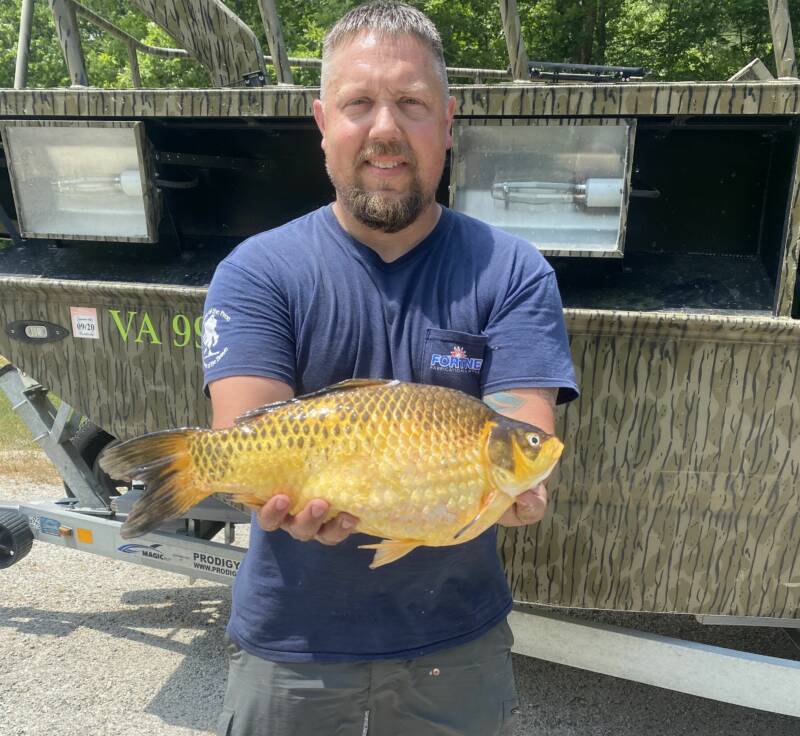 Virginia Department of WildlifeFisherman Jeremy Holt with his impressive catch in May 2021.

Indeed, giant goldfish have been reported all across the country. In early 2021, a fisherman in Syracuse, New York claimed to have caught a goldfish that stretched more than 14 inches long. And in 2019, a man in Kentucky caught what seemed to be a 20-pound goldfish.

Finds like these are alarming city officials — and prompting repeated warnings about dumping pet goldfish in lakes and ponds.

“You may think it’s a humane thing to do, but these fish are not meant to be in our natural system in large numbers,” Jacobson said.

Instead, officials suggest finding a new home for an unwanted fish. The U.S. Fish and Wildlife Service noted that pet stores will sometimes take in goldfish. Or, owners are encouraged to find friends, relatives, schools, or nursing homes that might want a new pet.

Just don’t leave your pet in a pond. As the U.S. Fish and Wildlife Service explained in an article entitled “How To Break Up With Your Goldfish:

“After you reenact Free Willy with your goldfish, you may be horrified to learn that under the right conditions it will survive and grow. And grow. Like, really BIG.”

After reading about the giant goldfish in lakes across America, learn how goldfish can turn their bodily fluids into alcohol. Or, peruse these (likely goldfish-free) beautiful lakes from around the world.