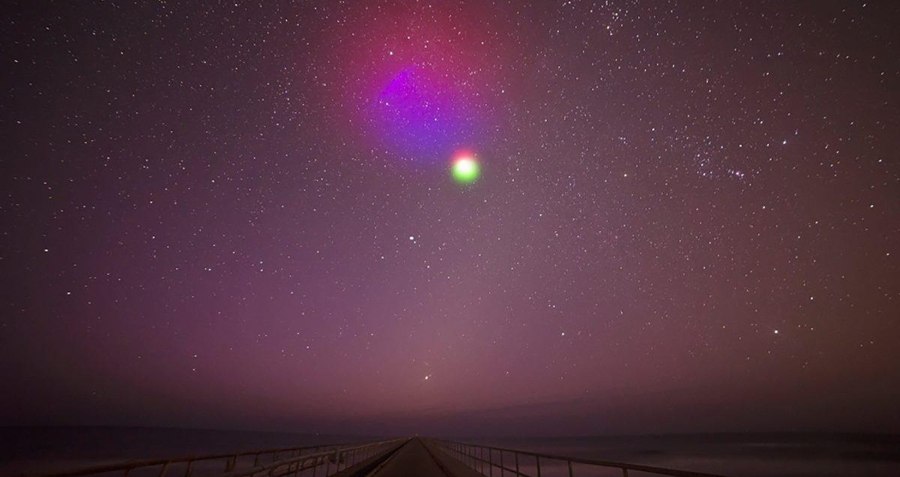 Because auroras only occur in the Arctic and Antarctic, the vast majority of us never get to see one in person. But thanks to a dazzling new NASA display, many of us will be able to see a light show akin to the real thing.

As part of a new experiment designed to teach scientists about Earth’s ionosphere, NASA will launch a rocket tonight (weather permitting, see below) from Virginia so that it can release canisters of several assorted chemicals into the night sky. The vapors from these chemicals will then form clouds of red, blue, and green that should be visible along the East Coast from New York to North Carolina.

In addition to creating a light show for us, this experiment will allow scientists to study how the charged particles in Earth’s upper atmosphere (specifically, the ionosphere) interact with sunlight and other atmospheric layers in order to produce auroras.

The colored chemical vapors that NASA will release serves as markers that will allow scientists to track these charged particles and learn more about how they move through space. As NASA stated, according to Newsweek:

“The movement of neutral and ionized gases are important to understand as they reveal how mass and energy are transported from one region to another. These movements also respond to changes in the sun’s activity.”

And while scientists are tracking particle motion and unlocking the mysteries of mass and energy, the rest of us will be able to enjoy the show — even if you’re not located along the East Coast. NASA will be live streaming the event on their Ustream starting at 8:30 p.m., with the launch itself scheduled for sometime between 9:04 and 9:14, with the light show due approximately five minutes after launch.

But although the launch time has been precisely set, the launch date actually remains up in the air. Five attempts have already been aborted due to factors like clouds and high winds.

When the conditions are right, the launch will occur sometime between now and June 18, with the next attempt scheduled for tonight. However, check NASA’s social channels for the latest on whether or not the show will indeed go on.

Next, read up on NASA’s recently announced 2018 mission that aims to touch the sun for the first time ever. Then, see the story of the NASA contractor who just unveiled a machine that can 3-D print pizzas in space.